Learn more about the inspiring people in CHM's Hall of Fellows.

For a lifetime of work in collaborative software and software entrepreneurship

“You could build an organization, a team, or a product. Building is the best form of activism. You can make a difference. You can shape culture.” 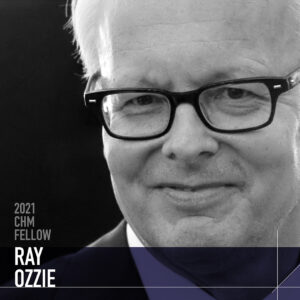 As the creator of Lotus Notes, the iconic corporate environment for online collaboration, Ray Ozzie has helped define the modern digital workplace. He has devoted his life since the 1970s to connecting people with computers and developing collaborative tools. Ozzie's belief in providing access to everyone was inspired by a programmer he met in college, who used a mouth wand to type into the university’s educational system and online community, called PLATO. In 2006, he took over from Bill Gates as Microsoft’s chief software architect, leading the company to develop the Azure cloud service. He’s started several other companies making specialized forms of collaboration software, and more recently founded Blues Wireless to focus on IoT communications.

"Building a Better World through Tech for Collaboration"

For his groundbreaking work in artificial intelligence, robotics, and computer science education 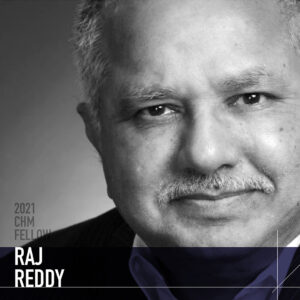 If you have ever talked into your computer, you can probably thank Raj Reddy. Reddy is an Indian-American professor and researcher in AI and a world leader in speech recognition. He is inspired by the belief that speech recognition software can dramatically improve access to information for the 2.5 billion illiterate people in the world.

Reddy founded and led the Robotics Institute at Carnegie Mellon University (CMU) in 1979, the first robotics department in any US university, developing it into a world-class center for robotics research and education. As Dean of the School of Computer Science at CMU, he also helped create groundbreaking centers related to language, human computer interaction, automatic learning and software research. Over his five-decade teaching career, Reddy has influenced thousands of students, many of whom have gone on to make contributions of their own in speech recognition, computer vision, autonomous robots, and universal access to information.

For her pioneering work at the intersection of art and computing

“Computers can be made to accommodate the entire breadth of artistic thought.” 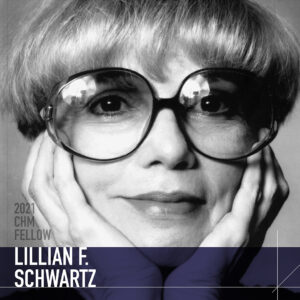 What would the famous artist-engineer Leonardo da Vinci have done with a computer? Lillian Schwartz tried to find out. Schwartz is an early and important artist who explored the use of computers in creating new forms of art and film. Her work, as early as the 1960s, used interactive sensors, kinetic movement, and complex projections and was featured at the Museum of Modern Art (MoMA). She worked closely with engineers at Bell Labs to push the limits of early computer systems, creating a series of highly-acclaimed and widely-exhibited experimental films incorporating computer animation during the 1970s. She won an Emmy in 1984 for a computer-generated TV public service announcement for MoMA, among many other accomplishments.

Schwartz’s life-long exploration of new materials for artistic expression led her to develop the computer as an artist’s tool and a new way to study and analyze art.

For a lifetime of contributions to computer graphics, hypertext, and education 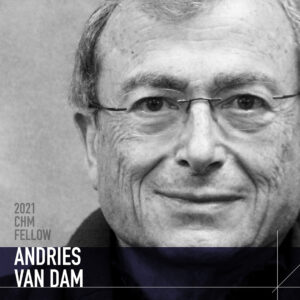 If you enjoy Pixar and Disney movies, there’s a good chance you’ve seen the influence of Andries van Dam. Van Dam is professor of computer science and former vice president for research at Brown University. In his five-decade career, he has taught over 10,000 students the fundamentals of computer graphics, based in part on his coauthored 1982 textbook, Fundamentals of Interactive Computer Graphics, which is a standard reference in the field. Many of van Dam’s students have gone on to make major contributions to computer graphics and its uses in areas as diverse as scientific visualization and entertainment, hyper/multimedia, and the online world.

In 1967 he cocreated a pioneering hypertext system and word processor, which provided inspiration for today’s world wide web. He also cofounded the precursor to SIGGRAPH, the professional society for computer graphics. In the 1970s and 1980s, he played key roles in pioneering the use of computers in education, including what is now called digital humanities.

Van Dam is inspired by a vision that graphical interconnected computing can unleash creative expression and communication for everyone and the conviction that computing should be driven by ethics.

This year’s program will look different from years past. Working with the creative event firm e2K, CHM has adapted its signature program from a single-evening gala to an immersive, yearlong all-virtual experience. Dynamic programming will spark important conversations, invite new perspectives, and inspire innovative ideas about how technology can shape a better future. Topics will explore influential change in a variety of fields and disciplines and touch on themes such as trust and connection, diversity and inclusion, leadership and ethics, and creativity and self-expression.

It is also the first time the Fellow Awards will be accessible to people around the globe, allowing CHM to engage and reach new audiences. Virtual events will feature notable guest speakers and digital content will honor Ozzie, Reddy, Schwartz, and van Dam throughout the year, with public programming and exclusive VIP opportunities for each Fellow happening once a quarter. Moving to a virtual program has afforded CHM a rare opportunity to reimagine tradition. The prestigious program will continue to be supported by collecting, education, and research efforts that reflect the groundbreaking work of each Fellow and preserve their stories for future generations.

This year’s Fellow Awards, presented by program sponsor Accenture for the eighth year, will kick-off on March 18 with a virtual event that celebrates Ray Ozzie. Events for Raj Reddy, Andy van Dam, and Lillian Schwartz will follow in June, September, and December respectively.