As part of the Exponential Center’s iPhone 360 Project, in collaboration with the Museum’s Senior Curator Dag Spicer, Internet History Program Curatorial Director Marc Weber, and the Software History Center‘s Director David C. Brock and Curator Hansen Hsu, the Computer History Museum (CHM) has launched a new exhibit that explores the technology, history, and business and social impact of the revolutionary device. While the 30-foot-high graphic display can be viewed in the Museum’s lobby, we are pleased to share the content from the exhibit below with all of CHM’s virtual visitors.

This exhibit is the culmination of extensive research and collective expertise across the Museum, with special thanks to Exponential Center Executive Director Marguerite Gong Hancock, Dag Spicer, and Marc Weber for content development; to Hansen Hsu for his valuable consultation; and to Vice President of Collections and Exhibitions Kirsten Tashev for overseeing exhibit production and coordination. We’d also like to thank CHM friend and exhibit designer Van Sickle & Rolleri.

Every once in a while, a revolutionary product comes along that changes everything.

One Device that Changes Everything

The iPhone is often the last object its owners hold in their hands before going to sleep and the first they reach for in the morning. The friendly all-purpose computer in our pockets and purses has changed how we get around, work, shop, bank, take pictures, even who we friend.

In 2007 Steve Jobs unveiled iPhone as a risky challenge to established smartphone makers, most in other regions. Surprising skeptics, iPhone snapped back the center of mobile development to Silicon Valley and made Apple the most valuable company ever.

iPhone’s uses and features were long anticipated by other mobile computers. But Jobs’ pet project brought them together in the package that would change the look, feel, and business model of every smartphone—and tablet—on earth.

Smartphones like the iPhone have helped schoolchildren in African villages access much of the same knowledge as freshmen at Stanford. They have also enabled surveillance. Your phone can literally monitor every step you take. Selfies trump modesty and screen time (too often) replaces personal interaction.

Jobs’ prediction at the launch has come true: iPhone has become “a revolutionary product that changes everything.” 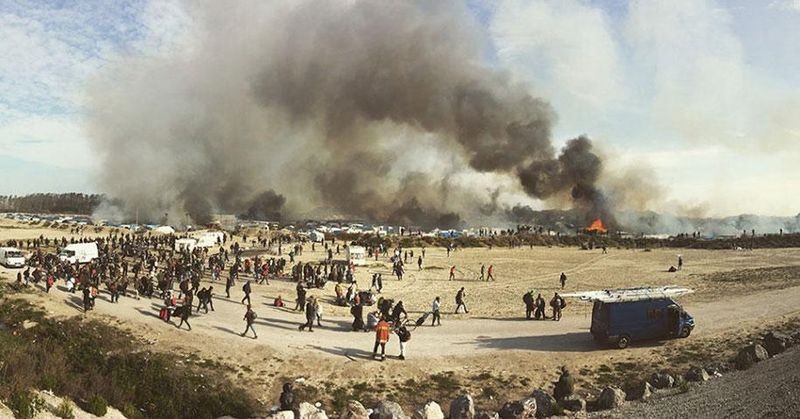 By 2005 cell phones had over two billion users. Many realized the future was mobile. Japan’s i-mode pioneered the mobile web in 1999. Europe’s Symbian and Canada’s Blackberry led the small but growing smartphone niche. Palm’s Treo was a strong US contender, but its market was limited. Silicon Valley’s earlier history of mobile failures—including Apple’s Newton—was also discouraging.

iPhone didn’t start as a phone. Galvanized by iPod’s success, Apple began developing a minimalist tablet—all screen, no keyboard. But then the skunkworks team stumbled across a multitouch pointing device. Could using fingers to pinch, scroll, and zoom create a new kind of interface—and let you browse full web pages on a phone-sized screen? Steve Jobs gave the green light.

What made iPhone take off? Hint: “i” stands for “internet.” Apple rethought the mobile phone as the sleekest browser with the biggest, crispest screen you could cram in your pocket. Integrated software, maturing data networks, Apple’s brand, and elegant design didn’t hurt. Nor did the subsequent app store, which turned the phone into an open-ended, multifunction device and enabled an end-to-end ecosystem that became the model for Android and others. 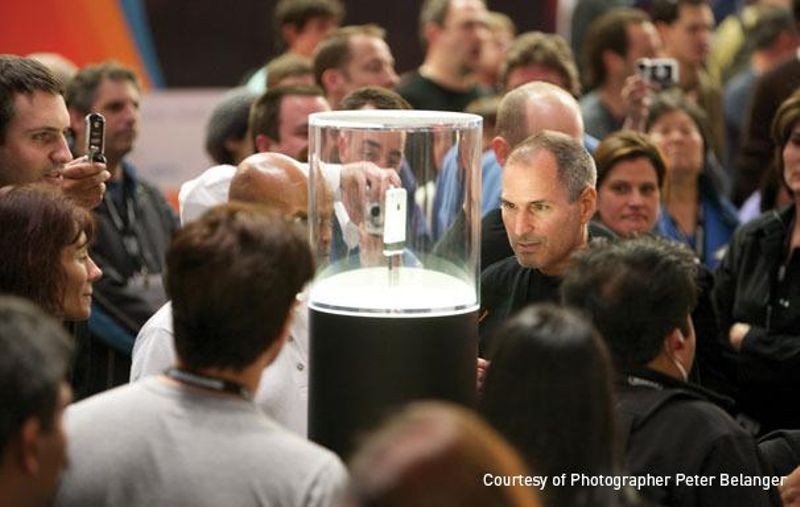 On January 9, 2007, Steve Jobs announced iPhone. The keynote was among his most electric in a career of startling and beautifully choreographed announcements, from the original Mac to the iPod. He teased the audience by announcing three products—a widescreen iPod, a revolutionary phone, and a “breakthrough internet communications device.” Of course, the iPhone was all three.

The World’s Most Valuable Company

With iPhone retailing at premium prices, it is unsurprising that less pricey Android is the dominant smartphone operating system worldwide, especially in developing economies in Asia and Africa. Samsung, LG, Huawei, and others lead sales among a fragmented field of players. Yet Apple has consistently captured the lion’s share of total smartphone profits.

For years iPhone has been the pacesetter. But it faces growing challenges from both high and low ends of the market. For example, Samsung’s top models compete directly and have set trends like phablets and “edgeless” screens. China’s Xiaomi, which has catapulted in seven years to among the world’s five bestselling mobile phone brands, offers credible challengers at half of iPhone’s price point. The battle for our hands, eyes, and pocketbooks is keener than ever. 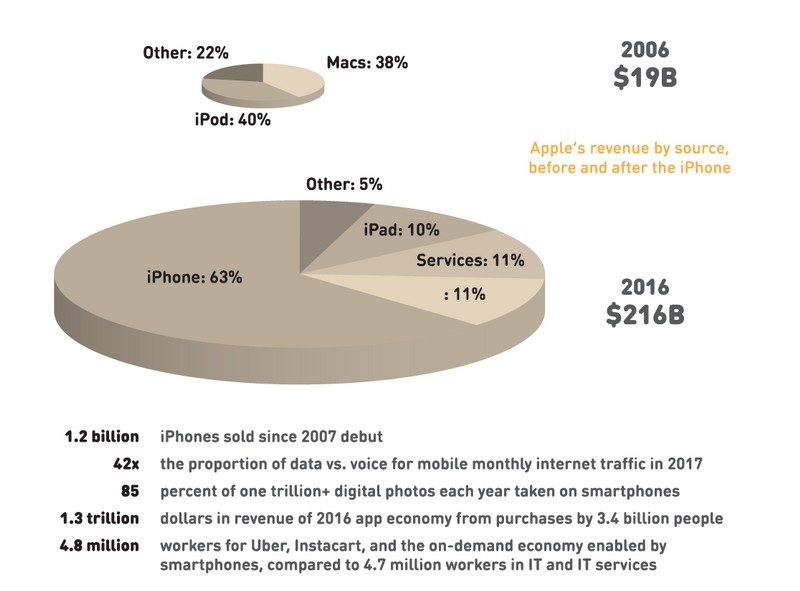 Designed by Apple in California. Assembled in China.

These eight words printed on the back of every iPhone represent Apple’s complex global supply chain and distribution system. From Foxconn’s “iPhone City” in China to Samsung in South Korea to Bosch in Germany, Apple manages more than 200 suppliers that employ more than 1.6 million people in 20 countries. International sourcing has raised critical issues about fair employment and safe working conditions, around both manufacturing and the mining of source materials in the developing world.

Apple gathers a constellation of components for assembly in China then delivers completed iPhones to users around the world. During Q1 2017 Apple sold a record 78 million iPhones, requiring an extensive and efficient global economic network to build and deliver the equivalent of 798,877 iPhones a day.

The 2016 32GB iPhone 7 retails for $649, with an estimated total cost of $220 for components and $5 for basic assembly. The iPhone 7 profit margin is calculated at a whopping $425 (or 60 percent)—a handsome reward for Apple’s design, brand, and orchestration of a complex network of suppliers and distributors around the globe. 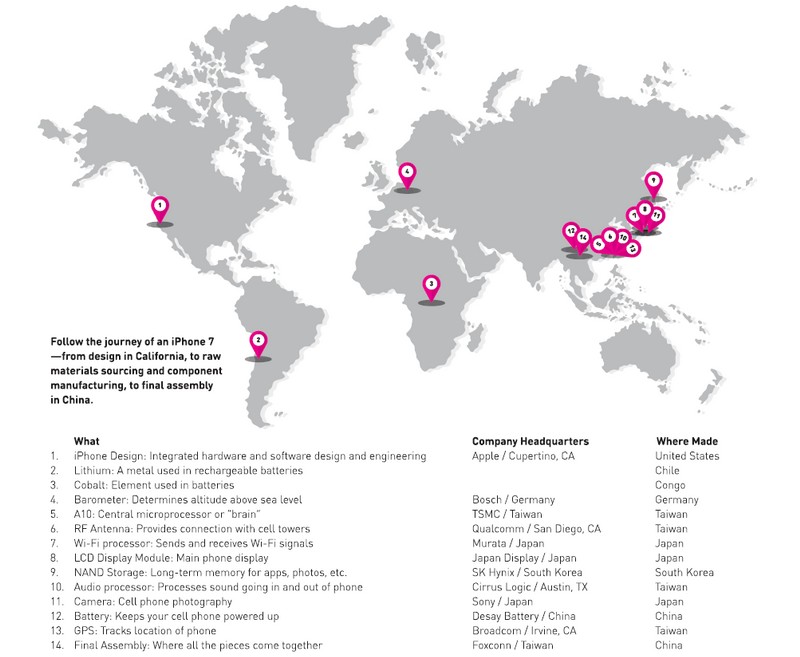 Here are some of the technologies and products absorbed—or spawned—by iPhone and its competitors: 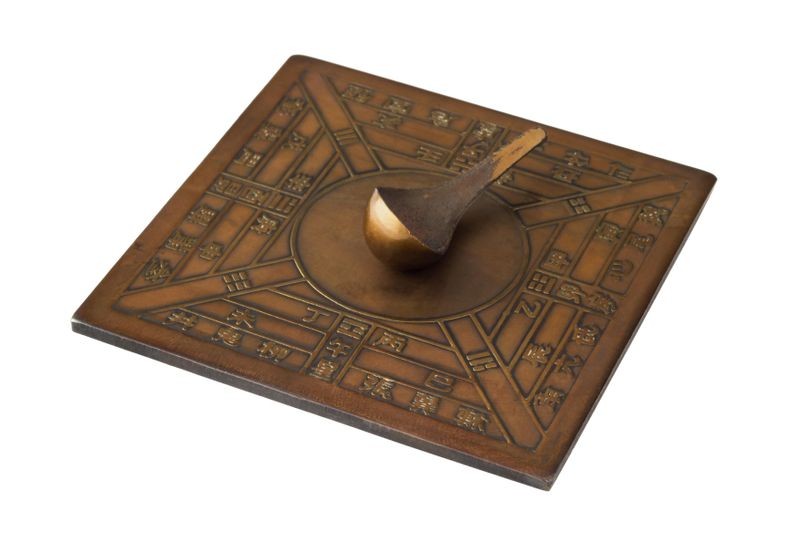 Compass (200 BCE) The first compass is believed to have been invented in China as early as the Han Dynasty. Compasses are built into smartphones and used in maps.

Telegraph (1840s) —People once spoke of the telegraph as “the nervous system of the planet.” Radio telegraphs in the 1910s pioneered wireless data. 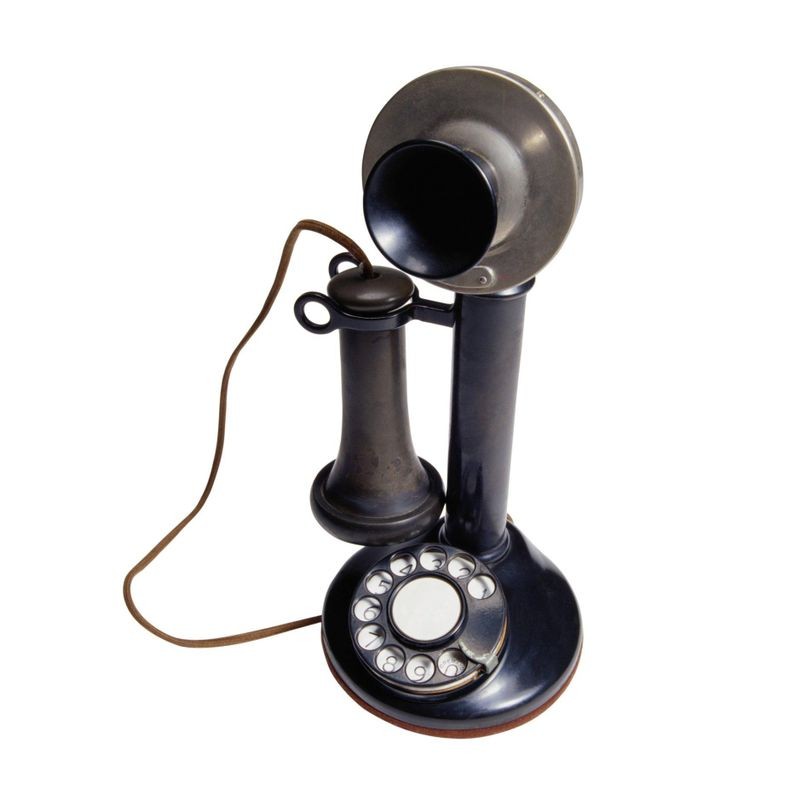 Telephone (1877) —The telephone brought the human voice across great distances.

Payphone (1889) —People on the go often carried spare change for the ubiquitous payphone, a common feature of the American urban landscape until cell phones arrived. 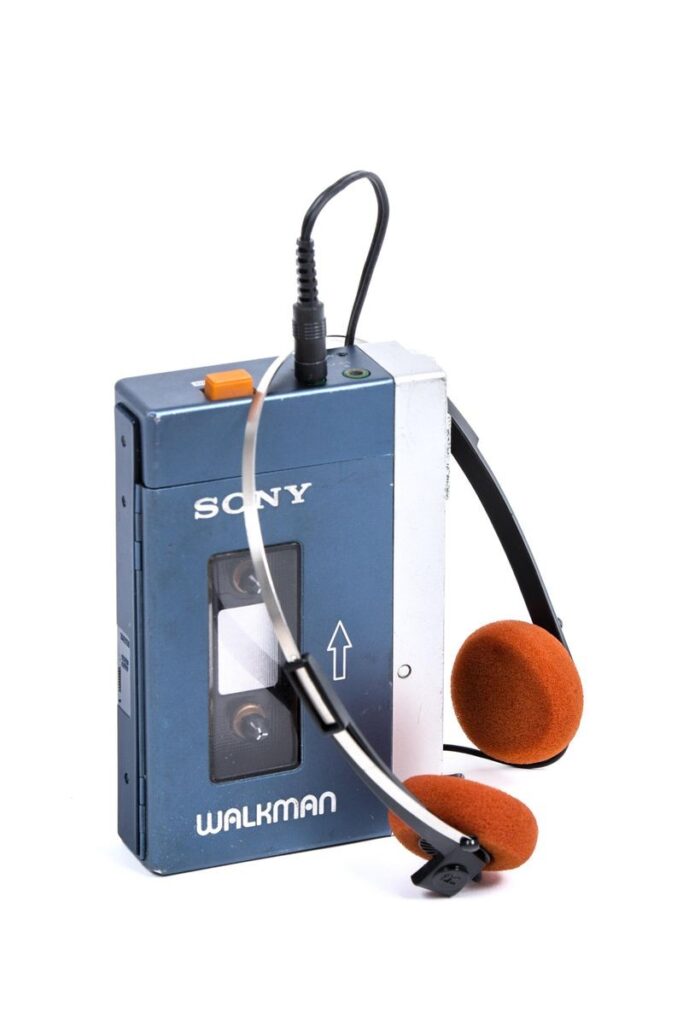 Digital camera (1991) —Kodak’s DCS-100 was one of the earliest cameras to use a digital image sensor, now common in all cameras and most phones.

Apple Newton (1993) —Based on the low-power ARM processor, the Newton was an ambitious personal digital assistant with built-in handwriting recognition. It was also Jony Ive’s first design for Apple. 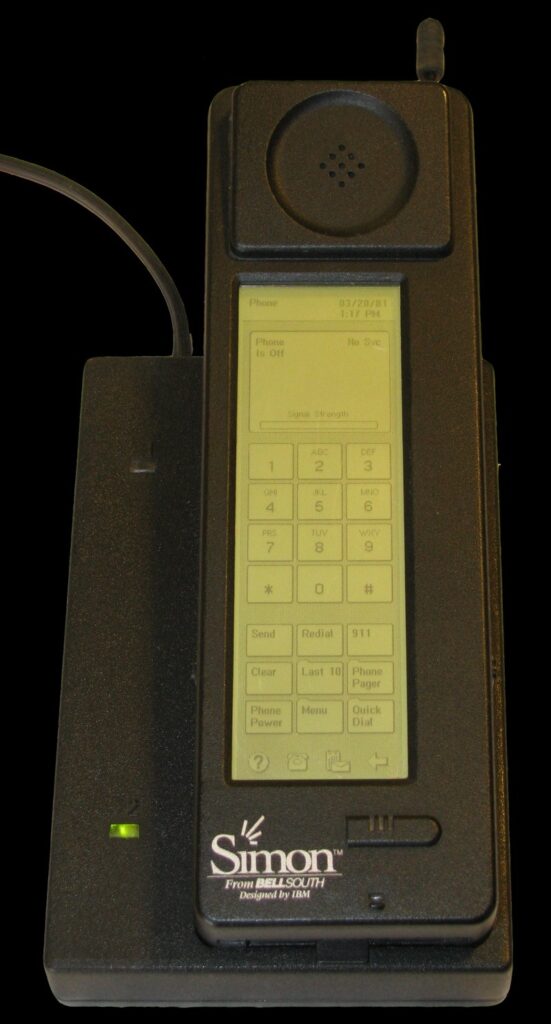 IBM Simon (1994) —The world’s first smartphone had only screen-based keys, like the later iPhone. It had contacts, email, games, and fax but no web browser.

Symbian smartphones (ca. 2001)—Symbian, based on the Psion organizer, was the leading global smartphone OS before iPhone. Blackberry and Treo smartphones were important in North America. 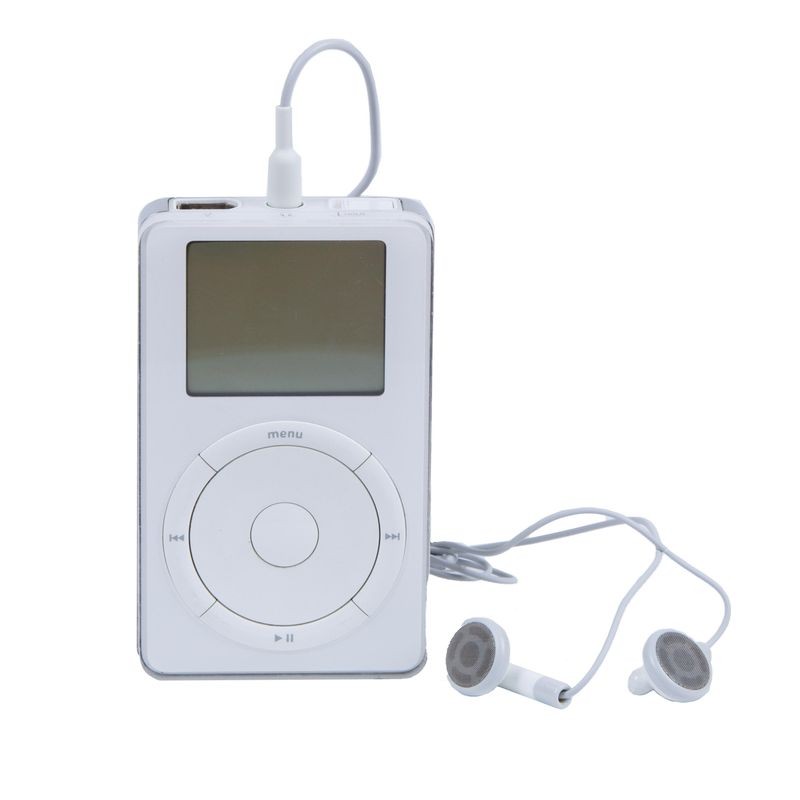 iPod (2001) —Precursor to the iPhone, it allowed users to keep “1,000 songs in your pocket.” Songs could soon be purchased from the iTunes store, which opened in April 2003. 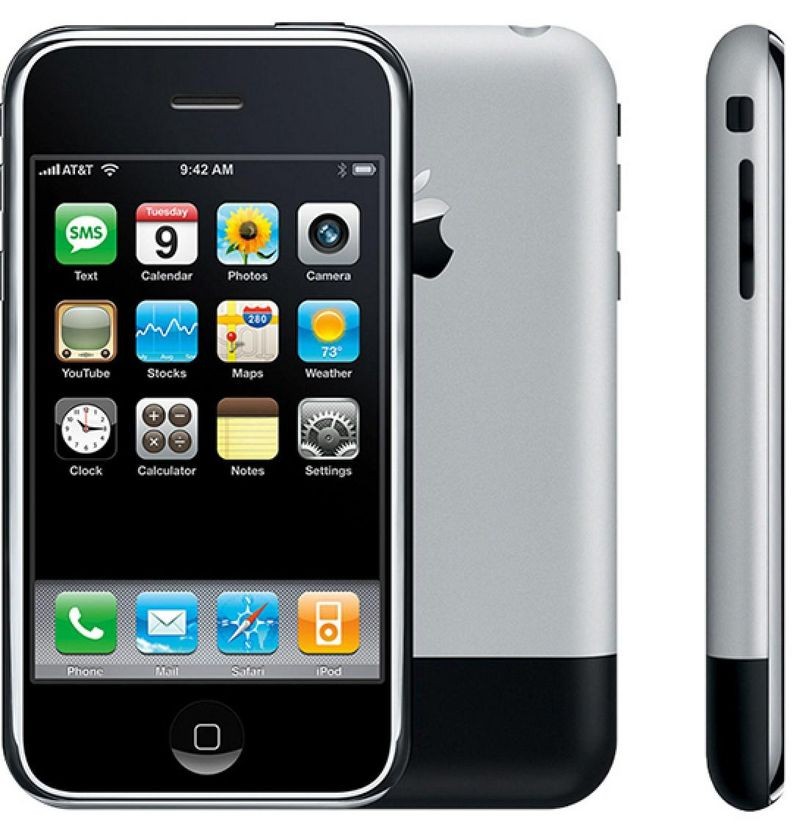 iPhone (2007) —On January 9, 2007, Steve Jobs announced iPhone as a “revolutionary product that changes everything.” He proudly showed off multitouch, full internet browsing capabilities, widescreen iTunes, and a variety of clever phone features.

App Store (2008) —Ushering in an entirely new method of buying software, the Apple App Store provided a curated—and censored—collection of software for iOS.

Angry Birds (2009) —As of 2017, this game had been downloaded over 3 billion times from the Apple App Store. The App Store today has over 140 billion downloads.