Politics and elections are the cornerstone of the democratic process in the United States. Technology—both historically and today—plays a crucial role in most aspects of the political process, from informing voters of issues and perspectives during political campaigns leading up to elections and swaying voters from one party or candidate to another, to the process of voting and tallying individual ballots.

This discussion guide prompts reflection and critical thinking about the ways in which technology, as an integral part of politics and elections, has had an impact on history and our lives today. Educators, parents and mentors can use this guide to support students as they explore two sections:

Each section will ask students to closely examine digital images, then respond to questions and engage in discussion about these topics.

How has the internet and technology changed the way that politicians campaign? How are individual people able to engage in discussion and debate using technology, and how has this changed the political landscape? With so much information and conflicting facts and stories available to us, how can the public identify what is true about political parties and candidates versus what is being shared by the opposition in an effort to win votes? What is #FakeNews and how can we differentiate it from accurate journalism?

Compare, contrast, and explore the use and impact of technology in the 1992 and 2020 presidential elections.

1. Look closely at Image A, a screenshot of actual text shared through Usenet, an internet-based newsgroup system that was actively used in 1992 to discuss and debate presidential candidates (as well as many other topics).

What are your first reactions to the content? What do you think the author was trying to illustrate? Through the Usenet platform, other people could respond to comments such as this one and join the discussion or debate. Can you draw comparisons to ways in which political candidates and their messages are described or debated today? Where can the public find this kind of content and discussion/debate in 2020? 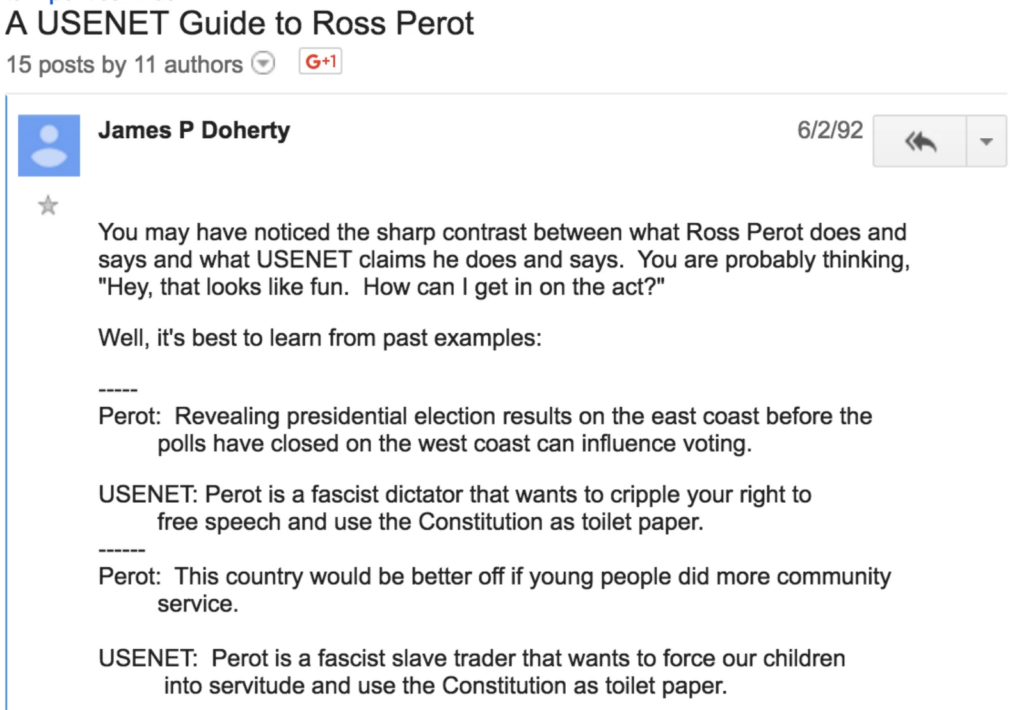 Screenshot of actual text shared through Usenet, an internet-based newsgroup system that was actively used in 1992 to discuss and debate presidential candidates (as well as many other topics). Image: Google Groups/A USENET Guide to Ross Perot

2. Closely examine Image B, a screenshot of content shared on the web-based platform Twitter, from current US president and 2020 presidential candidate Donald J. Trump.

What are your first reactions to the content? Based on the introductory description of the internet in 1992, how do you think this candidate’s use of technology is different from candidates who campaigned in 1992? 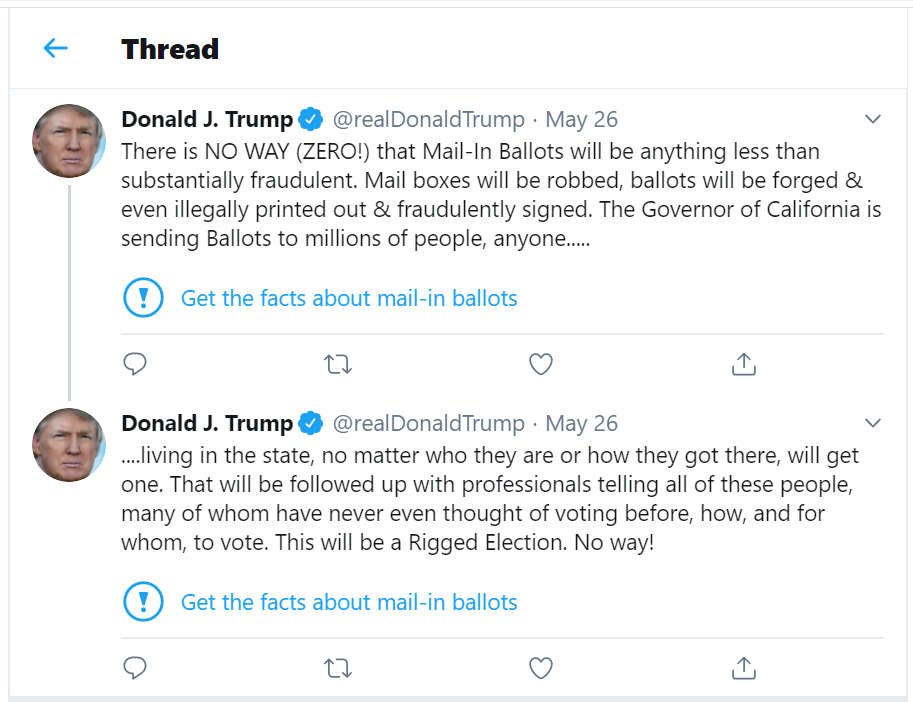 A screenshot of content shared on the web-based platform Twitter, from current US president and 2020 presidential candidate Donald J. Trump. Image: realDonaldTrump/Twitter

3. In comparing the digital content from 1992 (Image A) and 2020 (Image B), list ways in which the number and type of viewers might contrast. Do you think each piece of content shared online or through email-based user groups in 1992 reached a similar number of viewers as online content in 2020? Who was the audience and how do you think they could engage with information shared through these channels?

4. How do you think access to digital content has affected political campaigns and flow of information as it has increased since the 1990s? Consider issues of equity in relation to internet access and information. Who is able to join the conversations and stay informed through online content consumption and whose voices are excluded? During the current pandemic situation that has made in-person learning and sharing of knowledge more difficult, what types of traditional campaigning and information sharing are limited and which demographics are most affected by this?

5. In 2020, how has #FakeNews (a term used to describe false information that is being intentionally spread1) both online and through traditional media channels, impacted the campaigning process, and how might it impact the election outcomes in 2020?

6. In re-examining Image B, do you notice anything added to the tweet by the social media company Twitter? What role and responsibility do you think a company should have with regard to the accuracy of information being shared on their platform? How might this issue relate to censorship, propaganda, or freedom of speech?

7. Leading up to the 2020 federal election, social media platforms Twitter and Facebook have begun to fact-check posts made by politicians,2 and add notes to recommend reliable sources for additional information. What is a company’s responsibility to protect free speech on its platform? What should it do if someone uses its platform to spread misinformation? Do you think that advertising campaigns on television and online are being fact checked in the same way? How do access to technology and the algorithms used by social media platforms to filter posts to viewers impact the public’s access to information.

Are your votes secure? Does everyone have a say in the US presidential election? How does technology play a role in the voting process? Are there issues of equity related to how people vote?

Compare, contrast, and explore the voting process, security, and equity issues related to the 2000 and 2020 presidential elections.

1. Voters process their vote using a machine, and must use enough force to punch a hole in a paper card or ballot, which produces a small paper fragment called a chad. Look closely at Image C. How is a “clean chad” similar or different than a “hanging chad”? Explain your answer. 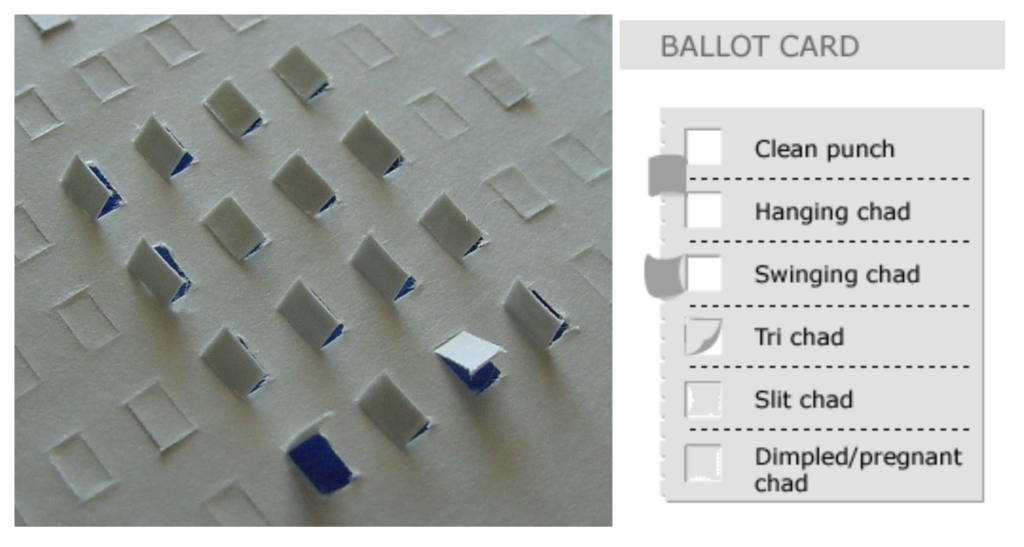 Hanging chad seen from the back of a prescored ballot, plus your guide to chads. Images: University of Iowa and BBC News

2.  In the 2000 presidential election, there were major problems tallying votes due to issues with “hanging chads.” If this card was to be processed by a machine to count and tally the holes punched in the paper, what problems do you think might be encountered? How could the electoral process be impacted by issues with chads and electronic counting machines?

3. Look closely at Image D and describe the difference in absentee or mailed ballot requirements for California, Wisconsin, Oklahoma, Iowa, and Alabama voters. 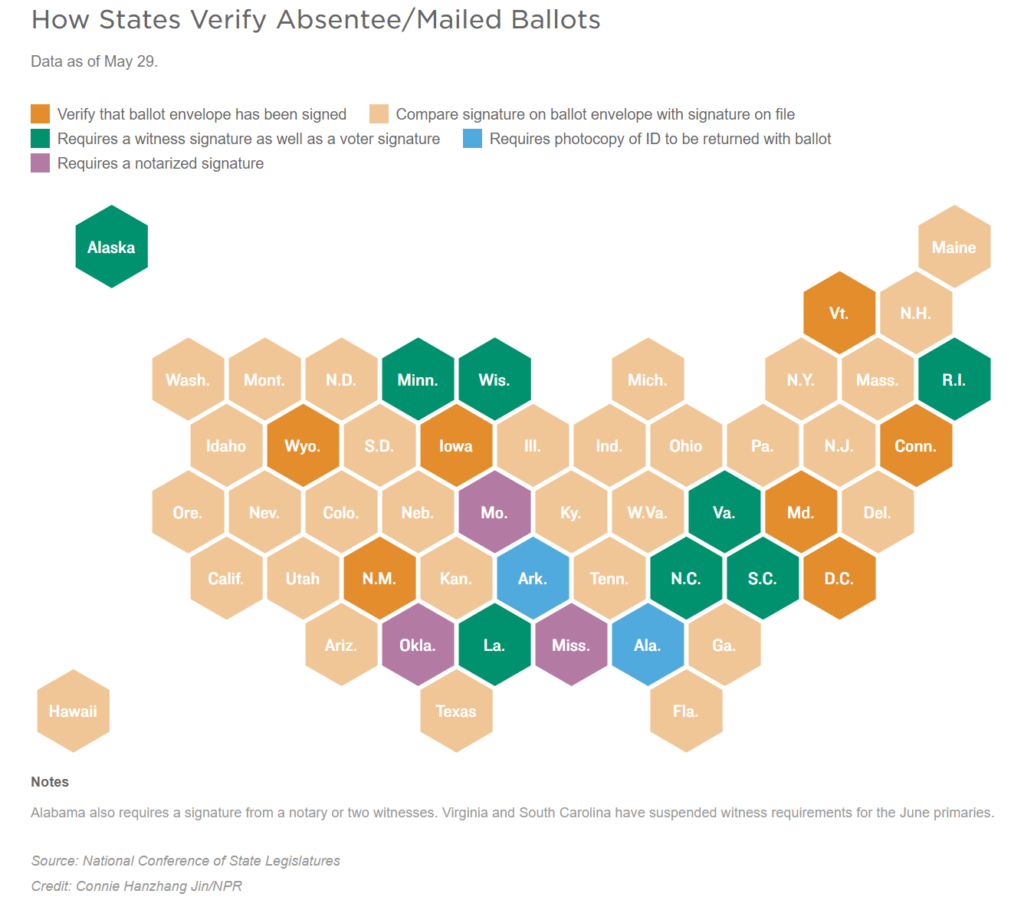 4. “Mail-in voting restrictions are implemented to preserve laws and protect against voter fraud.” Do you agree or disagree with this statement? Why?

6. What have you heard or learned about the upcoming election? Reflect on your personal knowledge related to the vote-by-mail election process during the 2020 pandemic. Identify and briefly describe your thoughts on issues related to equity and access in the 2020 election process.

Did You Use this Guide?

We are always striving to improve our activities and resources. Your feedback is appreciated. Let us know how you used this guide in our user survey.

Election 2020: Your Guide to CHM Events and Resources
Elections and Technology Timeline