An Early Door to Cyberspace: The Community Memory Terminal 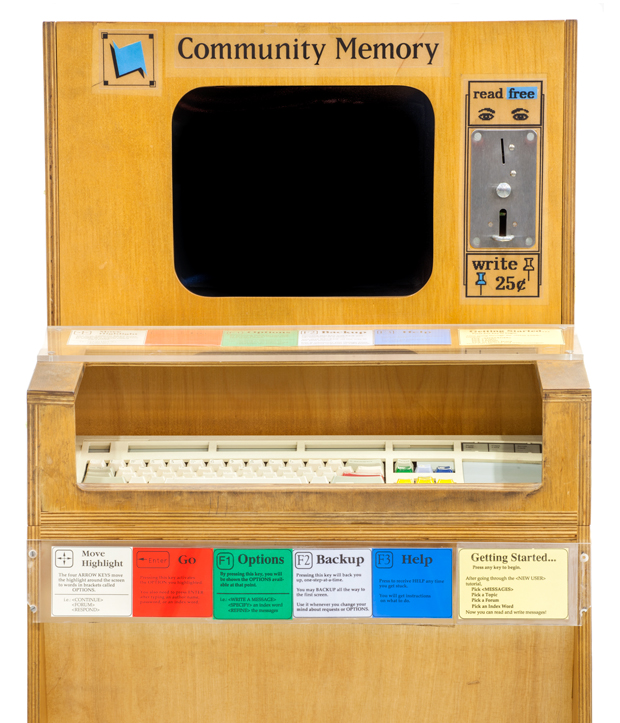 COMMUNITY MEMORY is the name we give to this experimental information service. It is an attempt to harness the power of the computer in the service of the community. We hope to do this by providing a sort of super bulletin board where people can post notices of all sorts and can find the notices posted by others rapidly.

We are Loving Grace Cybernetics, a group of Berkeley people operating out of Resource One Inc., a non-profit collective located in Project One in S.F. Resource One grew out of the San Francisco Switchboard and has managed to obtain control of a computer (XDS 940) for use in communications.

Pictured above is a later Community Memory terminal. The first was installed at Leopold’s Records, a student-run record store in Berkeley. The terminal connected by modem to a time-sharing computer in San Francisco, which hosted the electronic bulletin-board system. Users could exchange brief messages about a wide range of topics: apartment listings, music lessons, even where to find a decent bagel. Reading the bulletin board was free, but posting a listing cost a quarter, payable by the coin-op mechanism. The terminals offered many users their first interaction with a computer.

Among the volunteers who made up Loving Grace Cybernetics and Resource One was Lee Felsenstein, who would go on to help establish the Homebrew Computer Club and who played a number of other pioneering roles in the nascent personal computing industry. For Felsenstein, Community Memory was important for, among other things, opening “the door to cyberspace.” He discussed the project and its meaning in a 2011 video interview:

Lee Felsenstein was inducted as a Fellow of the Computer History Museum in 2016 for his influence on the technical and social environment of the early personal computing era...

The Community Memory project continued into the 1980s, when the terminal pictured here was created, and eventually evolved to include the idea of creating a national network of terminals and resources. (For more on the history of bulletin-board systems, see “Social Media’s Dial-Up Ancestor: The Bulletin Board,” in IEEE Spectrum.) But the underlying purpose remained unchanged: to increase the accessibility of computing as a means for communication and information exchange

To learn more about the Community Memory project, explore the Computer History Museum’s extensive collection on the topic and read “Community Memory: Precedents in Social Media and Movements.”

Part of a continuing series by IEEE Spectrum looking at photographs of historical artifacts that embrace the boundless potential of technology.