Today is Ada Lovelace Day the beginning of festivities to honor Augusta Ada Byron, Lady Lovelace whose 200th birthday will be celebrated on 10 December. She was a remarkable woman. 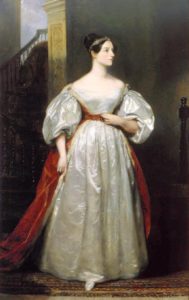 I first heard about Ada Lovelace in a museum. I was doing research on the history of computing, and visited the Deutsche Museum in Munich, Musée des Arts et Métiers in Paris and then went to the Science Museum in London. There was a model of Charles Babbage’s Analytical Engine, regarded by many as the intellectual foundation of the modern computer, and next to it was a picture of a beautiful young woman. It said Augusta Ada Byron, Lady Lovelace wrote a description of Babbage’s Analytical Engine in 1843 and she was the daughter of the famous poet, Lord Byron.

How strange! It was not till years later when doing research about her that I found a fragment of a letter in which she describes her way of thinking. She called it “poetical science” the art of combining, science, mathematics and imagination. She considered that using imagination with science would spark discovery and innovation. She started on that path when she was only 13, when like the ancient Daedalus, she decided she wanted to fly. She examined birds, read books, and asked questions. She wanted to build a flying machine, powered by steam that would “enable me to fly about…by the most direct road without minding either mountains or valleys…”. 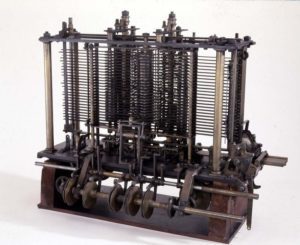 Ada met Charles Babbage when she was 18. Though he tried to encourage her to attend his Saturday night parties by describing a mechanical doll, the “Silver Lady,” it was his first calculating engine, the Difference Engine that captivated her. She was so curious that she asked Babbage’s son for the blueprints and attended lectures about the machine. She was present on a rainy night in late 1834 when Babbage revealed that he had an idea for a new machine, a machine which could not only foresee but act on the foresight. It was the conceptual birth of today’s computer revolution. Babbage then spent years filling volumes of his plans for the “Analytical Engine.” He went to Turin, Italy in 1841 to describe it to a gathering of philosophers. An Italian engineer wrote about it in French. As a surprise for Babbage, Ada translated it into English. Babbage then suggested she add notes and the notes ended up being longer than the original article.

The summer of 1843 the letters between Ada and Babbage flew back and forth. Ada’s focus was not just on the nuts and bolts of the Analytical Engine but a broader vision of what it might and might not do. In her description of Babbage’s engine she wondered what if it could work on other things but numbers: she wrote “Supposing for instance, that the fundamental sounds in the science of harmony …were susceptible of such expression and adaptations, the engine might compose elaborate and scientific pieces of music…”.

Before she ever wrote a table for how the machine would calculate a complicated algebraic algorithm, Bernoulli numbers, she wondered in 1840 whether she could write a plan to win a board game. Both Ada and Babbage were avid game players. Now the problem was how could you tell the machine what you wanted to do? It needed a table of instructions, now called a program. 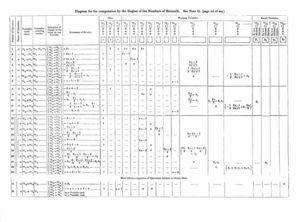 Ada, suggested doing a plan for Bernoulli numbers, a complicated algorithm which she had been studying with her tutor. This table is sometimes referred to the first program.

Though there are some today who criticize Ada being used as a symbol of the first programmer, her approach, then and now, is critically important to computing because she put the machine in a broad and a human context. Near the end of her life she wrote “my sun is rising…he will tell me to leave for mankind in my footsteps a …a glimpse of that which the great Future will unroll.”

She did give us a glimpse, by using her style of thinking “poetical science” and believing that this revolution was for “the benefit of mankind.” Ada’s style of thinking is important today. I rewrote my books as an ebook: Ada, the Enchantress of Numbers: Poetical Science to include activities that help to expand her vision.

Dr. Betty Alexandra Toole has been involved with research about Ada Lovelace for 32 years. She started her education at the University of Chicago and completed her Bachelor's and Doctorate degrees at the University of California at Berkeley. Before she became fascinated by Ada Lovelace she evaluated educational technology projects for the State of California and the Federal Government.