Playing AI on Ivory and Wood

William Stanley Jevons (1835–1882) is not a household name today, but he left his fingerprints on several strands of modern scientific thinking. In his 1874 Principles of Science, a copy of which can be found in the Computer History Museum collections, he sought to formulate precisely the idea of the scientific method; he feared that scientists “speak familiarly of Scientific Method, but they could not readily describe what they mean by that expression.”[1] He is also sometimes remembered as a founding figure of modern economics, celebrated for his efforts to introduce greater mathematization into political economy, as the subject was known in his time. And despite the seeming abstractness of many of his interests, he is also responsible for the construction of a striking physical artifact, his so-called Logical Machine or Logical Piano. 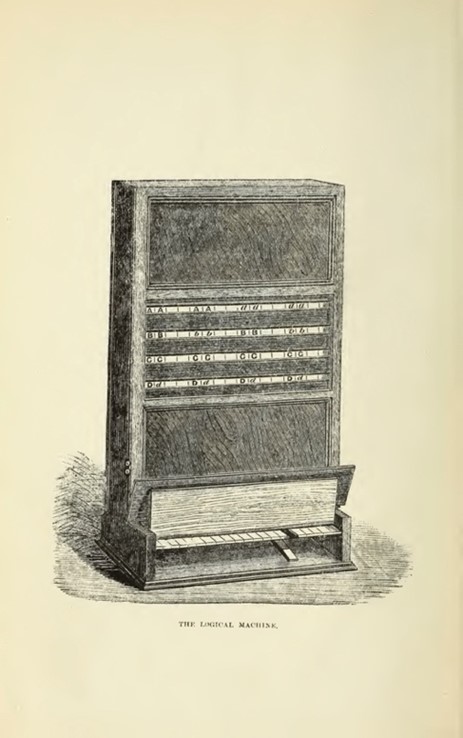 Illustrated here in the frontispiece to Principles of Science, and held today in the History of Science Museum in Oxford, the machine represented to Jevons “a conspicuous proof of the generality and power” of his logical method.[2] As a box with a keyboard that mechanically spits out solutions to problems input by a user, the Logical Piano readily evokes an embryonic idea of the digital computer when viewed with modern eyes. But perhaps what links this device most profoundly with today's computers is, ironically, the fact that it was not about computing.

Computers as we know them descend from machines dreamt up and built for the sake of literal—which is to say, rather, numerical—computation. Indeed the name “electronic computer” was first a way of distinguishing a machine from the usual kind of computer: a clerical worker, frequently female, who performed tedious and complex calculations in the service of some large, bureaucratically organized scientific project. The first electronic computers did not so much replace these workers as modify and rearrange the work they were hired to perform. All of this collective human and machine labor aimed at executing complicated calculations with ever greater accuracy and efficiency.

Jevons's famous contemporaries Charles Babbage and Ada Lovelace belong to this calculating tradition too. Their work around the Difference Engine and Analytic Engine aimed to delegate the work of computation to steam-powered mechanisms. Babbage, like the military engineers behind ENIAC a century later, suspected that the costly and time-consuming labor of large-scale calculation could be circumvented by a well-designed machine.

Once some of these large electronic calculating machines were up and running, engineers and programmers begin to envision other functions for them. The makers of computers recognized their potential applications to data processing, while other researchers envisioned a pure theory of computing largely detached from numerical calculation. The machines’ functions multiplied until the word “computer” came to denote a technology that today most people use for reasons utterly unrelated to computation.

Machinery is capable, in theory at least, of rivalling the labours of the most practised mathematicians ...

Jevons was not particularly interested in massive numerical computation, but he found Babbage’s project inspiring because he believed it had larger implications concerning the nature of intelligence. According to Jevons, by articulating a plan for the Analytical Engine, Babbage had already “shown that material machinery is capable, in theory at least, of rivalling the labours of the most practised mathematicians in all branches of their science.”[3] Meanwhile, George Boole had recently publicized an algebraic system of logic that translated syllogisms, the traditional matter of formal logic, into systems of equations. A syllogism is a form of reasoning that consists of two premises involving three terms and a conclusion following from them. The classic example is “If all Greeks are humans, and all humans are mortal, then all Greeks are mortal.” If this sort of logical deduction could be conducted by means of equations as Boole had demonstrated, and equations could be solved mechanically as Babbage had shown, then couldn’t a machine be built to perform logical reasoning?

I find it necessary to have each step of the work done separately in order that I may see whether I have planned every thing rightly.

Jevons soon designed just such a machine, and hired a clockmaker (whom he did not credit by name) to build it according to his plans. Their working relationship was not frictionless: Jevons struggled to trust this hired craftsman, deeming it “necessary for me to go there almost every day to see that he is getting on right. I find it necessary to have each step of the work done separately in order that I may see whether I have planned every thing rightly.”[4] His lack of confidence in the artisan who actually built the Piano bears an unfortunate resemblance to the way early programmers would conceive of instructions for inanimate machines as needing to “contain everything necessary to cause the machine to perform the required calculations and every contingency must be foreseen.”[5]

It seems the first machine they produced was not satisfactory, but collaborative difficulties notwithstanding, by the next year Jevons was highly optimistic about their progress on yet another new machine “in appearance like a large accordion or a very small piano, & has 21 keys exactly like white piano keys.”[6] 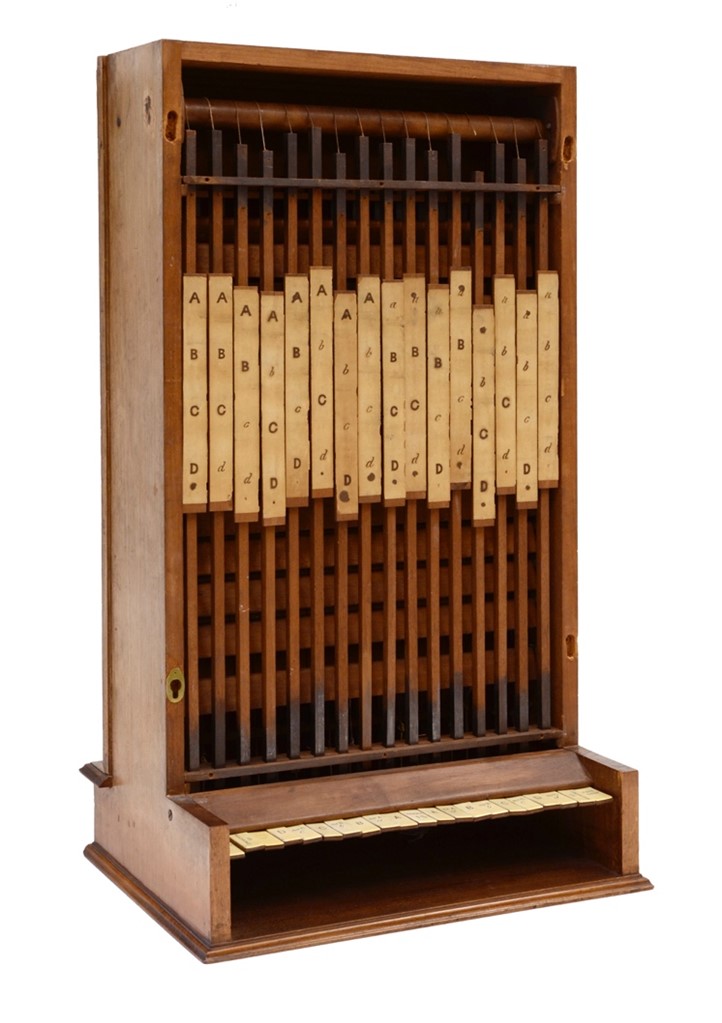 The finished Logic Piano with its detachable cover removed to reveal some of the mechanism. Inv 18230, © History of Science Museum, University of Oxford. http://www.mhs.ox.ac.uk/wp-content/themes/mhs-2017-responsive/imu-media.php?irn=49854. 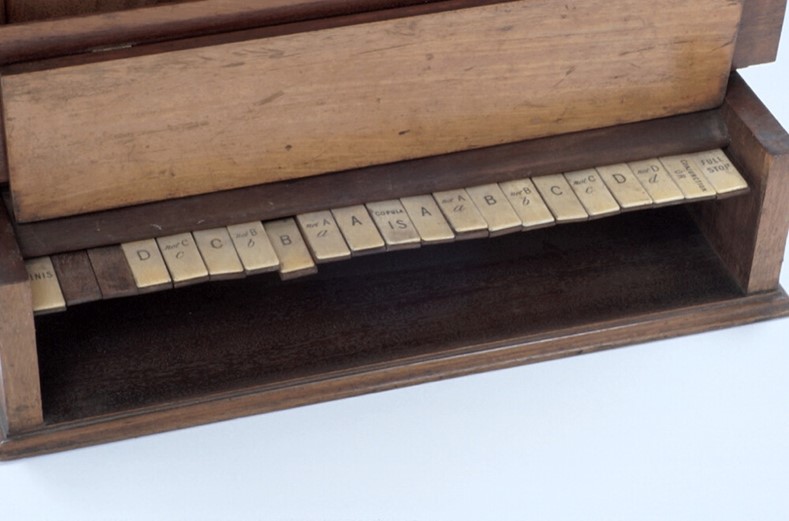 Jevons’s piano was built to reason from premises describing classes of objects: statements like “All As are Bs” or “Anything that is A and B is either C or D but not both.” A user could enter input of this kind on the keyboard, and a concealed system of rods and pulleys would cause a panel to display only those combinations of the classes A, B, C, and D not ruled out by the premises. He reported to the Royal Society:

By merely reading down the premises or data of an argument on a key board representing the terms, conjunctions, copula, and stops of a sentence, the machine is caused to make such a comparison of those premises that it becomes capable of returning any answer which may be logically deduced from them. … The actual process of logical deduction is thus reduced to a purely mechanical form.[7]

There is certainly room to object that this highly specific type of problem solving is too artificial to represent deduction in a meaningful way. Not all of Jevons’s contemporaries were convinced that his machine automated anything particularly difficult or worthwhile, and we can hear echoes of those Victorian debates in discussions of AI and machine learning today. Disagreements about whether a machine can reason are never just debates about what the machine can do; they are about what it means for human beings to reason in the first place.

These are big questions, and they confront us today in such disorienting new forms that, wherever we stand on twenty-first-century AI, we are unlikely now to see Jevons’s piano as a harbinger of the singularity. But historical distance is useful: the glaring differences between our technology and that of the Victorians only makes the rhetorical echoes more striking. We are not the first to be floored by the logical prowess of our devices (nor the first to fret that undetected flaws in their construction might render them unreliable). Nearly a century before people began to suspect that the digital computer was destined for higher logical functions than mere computing, Jevons looked to Babbage’s engines and argued that a machine could do more than calculate by steam: that his Logic Piano would not just compute, but reason.

1.) W. Stanley Jevons, The Principles of Science: A Treatise on Logic and Scientific Method (London: Macmillan and Co., 1883), vii. See the History of Science Museum’s entry for the Logic Machine at https://www.hsm.ox.ac.uk/collections-online#/item/hsm-catalogue-6547.

5.) Maurice V. Wilkes, David Wheeler, and Stanley Gill, The Preparation of Programs for an Electronic Digital Computer, with Special Reference to the EDSAC and the Use of a Library Of Subroutines (Cambridge, MA: Addison Wesley Press Inc., 1951), 1.

7.) Jevons, “On the mechanical performance of logical inference,” 500.

David E. Dunning is a historian of science, mathematics, and computing. He is currently a Postdoctoral Research Associate at the University of Oxford. His research explores the material and social dimensions of the ways people make abstract knowledge. His current book project examines the rise of mathematical logic through the lens of writing, exploring technical and cultural aspects of symbolic systems, including their connections to early digital computing.