Now Showing in the Screening Room

The compositions of F. Richard Moore and the films of Lillian F. Schwartz

CHM is delighted to publicly present five rare editions of Lillian Schwartz’s experimental films from the early 1970s, all with scores composed and created by F. Richard Moore. This collection of films documents an extraordinary moment in both the history of computing and art history, in which breakthrough systems for both computer music and computer animation at Bell Labs were used for an artistic collaboration that demonstrated the great range of new aesthetic possibilities.

The films will be shown from September 2 through December 31, 2022.

The Films and the Technology 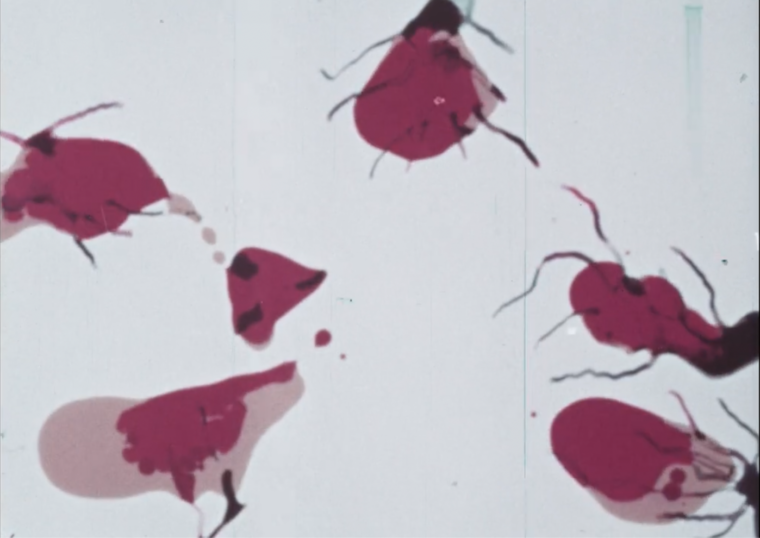 Music-Film-Computers begins with a 1970 edition of Pixillation. This film was the first that Lillian Schwartz created in her association with Bell Labs. It features computer animation sequences that Schwartz colorized, layered, and sized using established cinema techniques. Further, she combined these computer animation sequences with other footage and with drawing and painting elements that she created. For the computer-generated segments, Schwartz worked with Ken Knowlton, a computer researcher at Bell Labs who had earlier created novel approaches to and a programming language for generating computer animations using the Labs’ mainframe computer and output equipment. 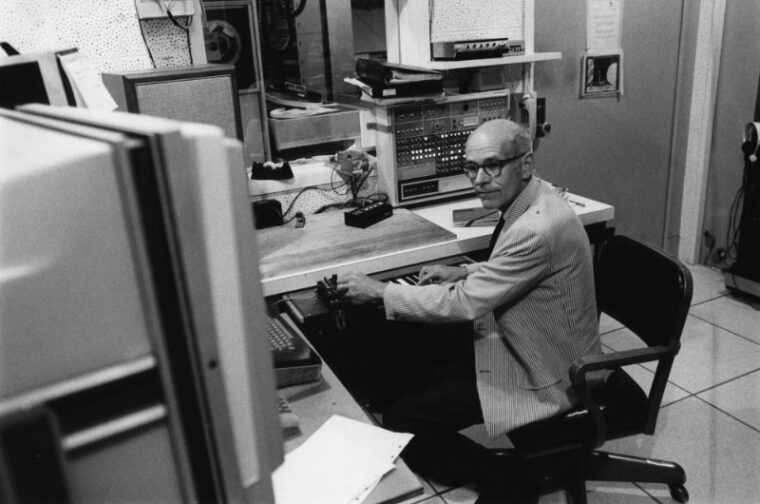 Schwartz initially created four editions of Pixillation, each with a different score. The first edition, presented in our exhibition, features a score by F. Richard Moore. It was followed by an edition scored with conventional instruments, and two editions with scores by Gershon Kingsley who used the Moog analog electronic synthesizer to create them.

For his score of Pixillation, Moore used a breakthrough computer music system called GROOVE, which he and Max Mathews had recently created and were continuing to develop. GROOVE is historically important for moving computer music into the realm of performance, able to be operated in real-time to generate music live. In the GROOVE system, an operator used a variety of input devices to control the generated music; at first a series of knobs, switches, an electric typewriter, and a joystick, with a piano keyboard added eventually. These inputs fed into a digital computer, which kept track of their sequence and significance, and in turn relayed the appropriate command signals to a large rack of analog Moog synthesizer units, oscillators, filters, and amplifiers which generated the music through a loudspeaker. Performances using GROOVE could, of course, be recorded on audio tape.

Max Mathews and the controls of GROOVE at Bell Labs. From https://120years.net/category/name/max-matthews/ 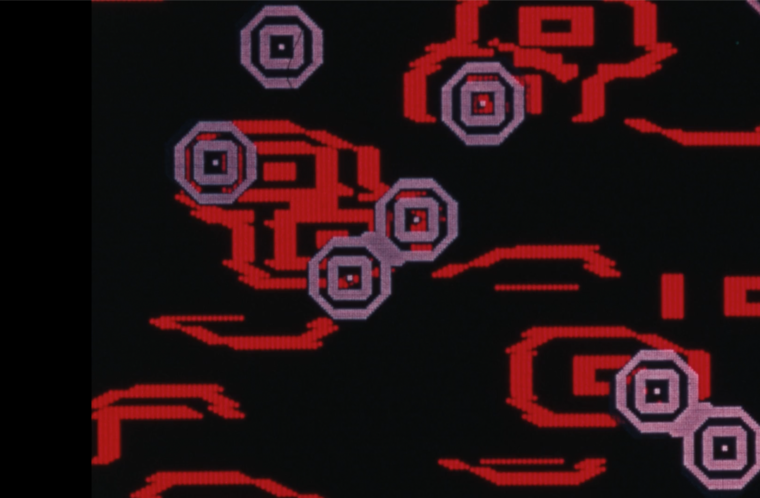 Our second selection is a 1972 edition of Schwartz’s film Affinities. This film represented a major step for Schwartz, as she elected to create it using only computer animated sequences. As with Pixillation, she used conventional cinema techniques to colorize, size, layer, and otherwise modify these sequences, but she did not mix any other kinds of footage with the computer animations. 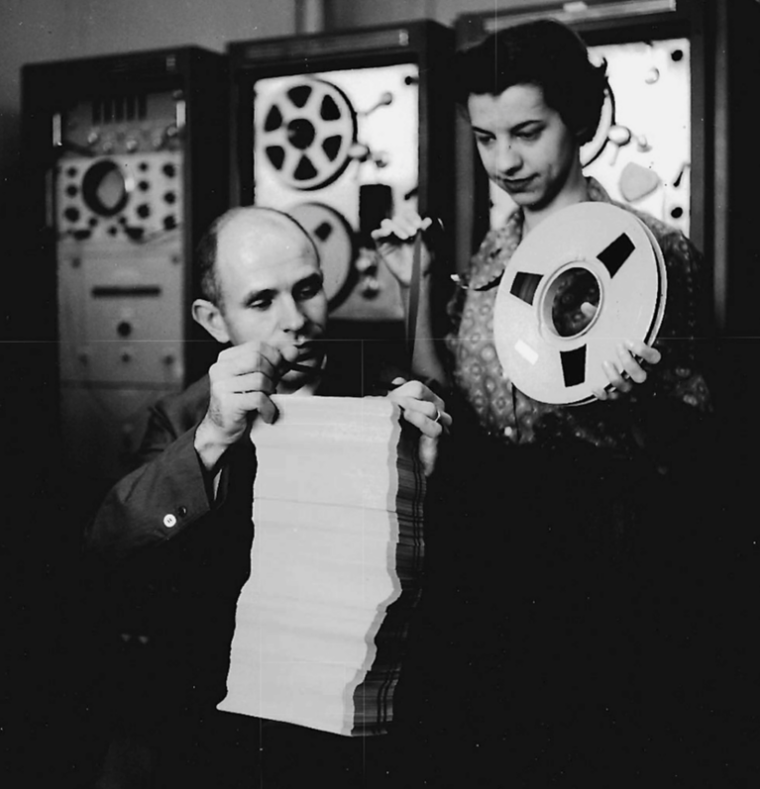 Moore’s score for Affinities was not an original composition, but rather a novel computer-generated rendition of Beethoven’s variation of Mozart’s “Là ci darem la mano” duet from the opera Don Giovanni. For this score, Moore used a different, older computer music system on which he had also collaborated with Max Mathews: MUSIC V. MUSIC V was a software system for the digital synthesis of sound and music. With it, users could generate sounds and music using FORTRAN IV commands, a widely used programming language available on many different mainframe computers of the day. The system allowed the user to specify both the sequence of notes to be generated, but also the “instruments” to form them. These “instruments” were entries in an electronic store of pre-programmed digital sound generators.

Using MUSIC V put the user at quite a remove from the final, audible music. First, the program instructions were entered into the system, by terminal or punched cards, processed by MUSIC V, and then a magnetic tape of the output was created. This tape, in turn, was transferred to converter equipment that would generate a audio tape that, finally, could be played on a tape recorder and heard from loudspeakers. This great remove from composition to listening makes all the more remarkable the reaction to the score recalled years later by Lillian Schwartz: “The reaction of critics to the Affinities soundtrack will seem absurd in today’s world . . . The digitally produced music was rejected for being too pure, too perfect.”

Max Mathews with Joan E. Miller, an acoustical researcher and computer music pioneer who worked with Mathews and Moore on MUSIC V. From https://120years.net/wordpress/music-n-max-mathews-usa-1957/ 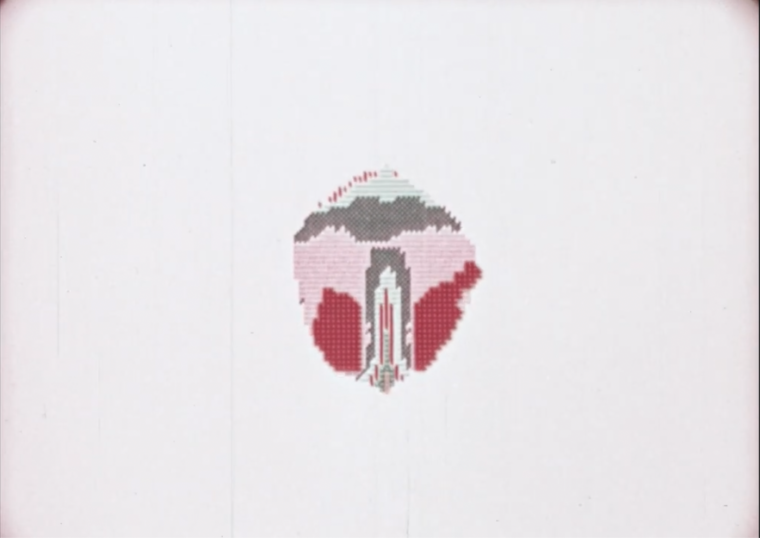 Our third selection in the exhibition is a 1972 edition of Schwartz’s film Apotheosis. For it, she departed from computer animations for the core of the film in favor of another source of electronic image. Apotheosis consists primarily of electronic medical images, extensively manipulated and transformed at Schwartz’s hand using optical cinema techniques. These images were the output of a positron emission tomography scanner—a PET scan—that imaged the interior biological functions of the human body by electronic detection of the decay products of radionucleotide tracers given to the patient.

At the time of this film, PET scans were very much a cutting-edge medical technology, and the images produced had a pixilated, low-resolution quality owing to the limited number of electronic detectors in the devices. Schwartz reportedly obtained the PET scans from her husband, a pediatrician, and evidently used them with the permission of his young patient. The opening credits in this edition of the film read “Starring David Stirling,” likely the imaged patient. 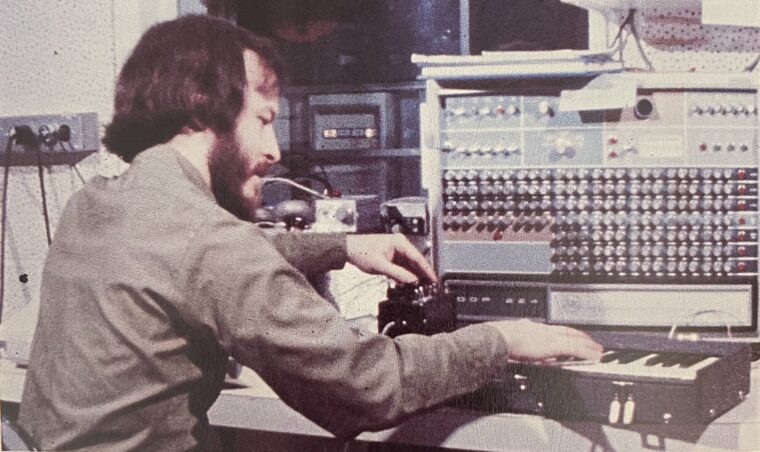 For his score of Affinities, Moore may have again used the GROOVE digital music performance system. Not only was Moore busy at work developing GROOVE, but also the score has many points of similarity to his earlier score for Pixillation. 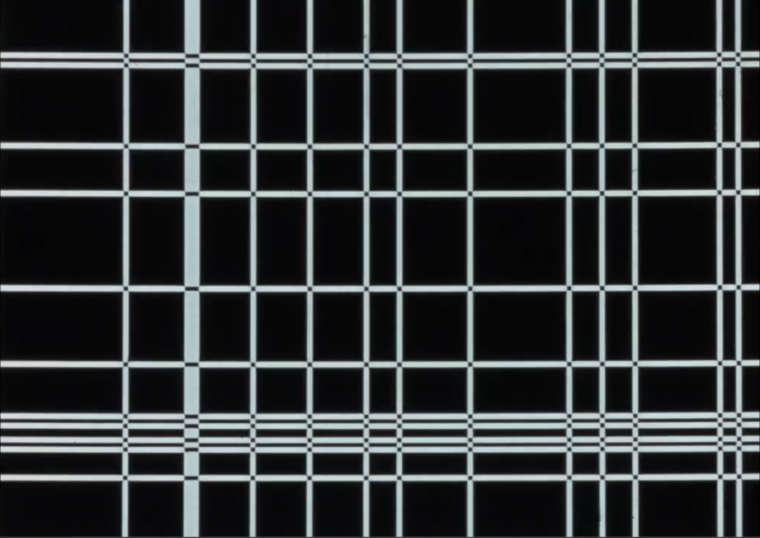 Our fourth selection is a 1972 edition of Schwartz’s film Enigma. Here, Schwartz returns to the exclusive use of computer animation footage as her base material. The film is concerned, in part, with an exploration of human color perception. Early simple geometries, predominantly black and white, and extensive flicker provoke color perceptions in the viewer where none appear on the screen. These give way to steadily more complex geometries, with increasingly vivid colorization by Schwartz, that introduce quicker, perhaps more complex color effects.

In this perceptual interest, Schwartz’s film connects to broader concerns with perception and optical effects, and also to a concern for the embodiment of the art audience, within the artworld of the 1960s and 1970s. In counterpoint, Moore’s score—known to have been composed and generated using the GROOVE system—rises and falls in complexity through several cycles, sometimes contrasting musical complexity with visual simplicity, and vice versa. However, the score overall comports with the regular geometries of the film, as Moore forgoes distortions in favor of crisp, intelligible sounds. 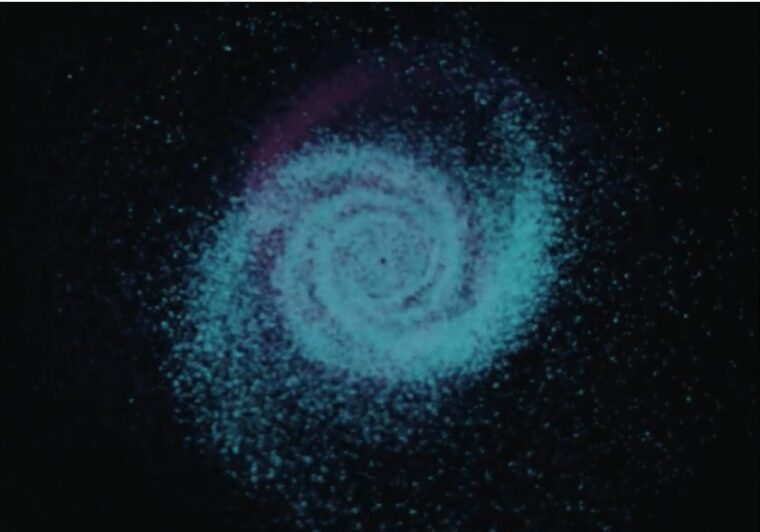 Our fifth and final selection in the exhibition is a 1974 edition of Schwartz’s film Galaxies. For it, she drew on computer animations from outside Bell Labs. Here, Schwartz drew on the research activities of Dr. Frank Hohl at NASA’s Langley Research Center in Virginia. Since the late 1960s, Hohl had been developing ever more complex and sophisticated simulations of galaxies in order to test theories about their development and dynamics. Using NASA’s powerful mainframe computer, Hohl added ever greater numbers of stars to his galaxy simulations, greater precision, and a greater number of factors in his models. Eventually, Hohl created computer animated films of the output of his galaxy models, showing their motions and changes over time.

In this edition of Schwartz’s film, some conventional footage appears at the beginning, but the bulk of the film is composed from Hohl’s dynamic animations, with subtle coloring, layering, and sizing by Schwartz. Later editions of Galaxies by Schwartz feature much more extensive modification, manipulation, and highly saturated color. Moore’s score intensifies the visual effect of images comprised of many thousands of individually moving points with music comprised by fleeting notes of very short duration, rising and falling in swirls.

The Studio at CHM

Mastering the Game: A History of Computer Chess