The Other Internet Part 1: Masai Mara

“Yes, we buy cattle with M-Pesa on our mobile phones. It is far more secure than carrying cash.”

George is sitting on a folding stool and wearing his tribe’s full traditional dress, a mix of loosely wrapped bright red and purple and pink plaids – as well as fluorescent beaded jewelry – that can make the Day-Glo acid colors of the 1960s look as drab as a female peacock. One of his fellow Maasai is wearing a dashiki in a playing card pattern of clubs and spades. 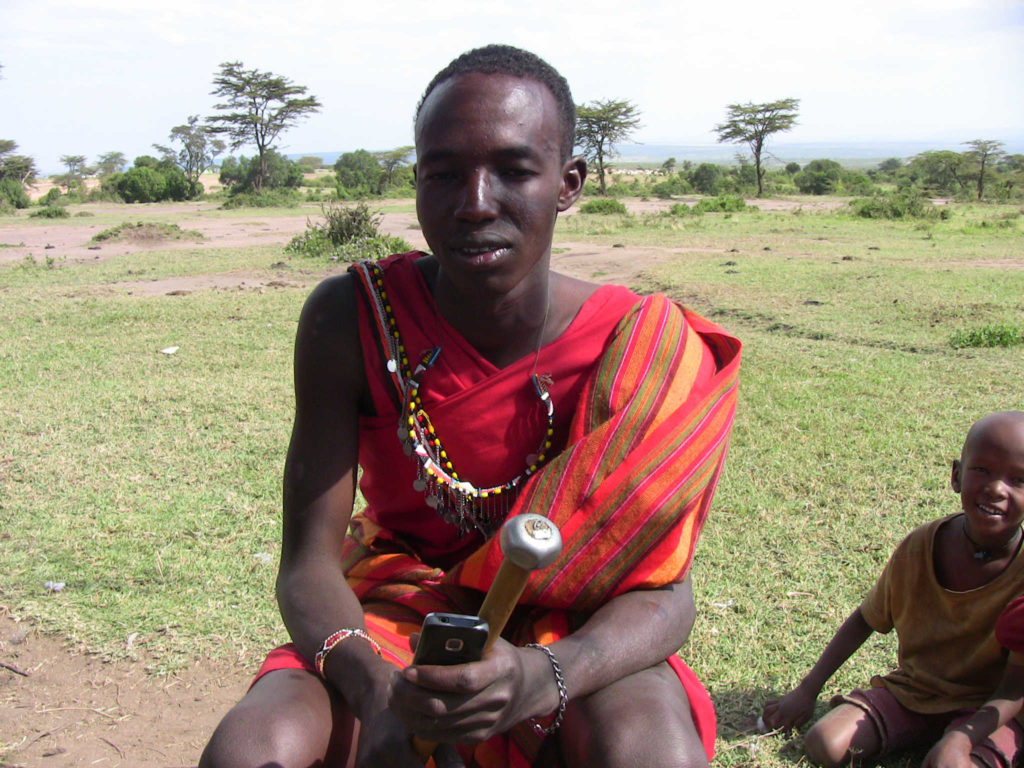 George with a mobile phone and a metal-headed version of the traditional throwing club (orinka).

I’m kneeling on the ground behind my camera, just beyond the thorn-branch walls of their village in the early morning light. Those branches are all that separate the tribesman and their herds from lions, leopards, and other beasts that sometimes roam out of the unfenced park less than a mile away.

My wife Raffaella is holding a portable reflector to fill in the shadowed side of George’s face. Red earth and bright new shoots of grass stretch away in the distance here in Masai Mara, the Kenyan extension of the gently rolling Serengeti plain. Small white goats and newborn calves with their mothers pass behind the tribesman’s head, and I hope the bleats and moos won’t overpower the tie-clip mike pinned to his crimson wrap.

George is in his very early 20s, bright and very interested in the outside world as well as his tribe’s traditions. Besides informally teaching the village children, who cluster around us, he’s hustling for funds to go to college. It’s no great surprise that he’s comfortable with technology. But he and the two other Maasai we interview make it clear that mobile phones – including the Kenya-wide mobile payment system M-Pesa – are used by all but the oldest members of the village and are deeply changing daily life.

That change has accelerated in the last two years. That’s when several new antenna towers, built by competing mobile providers, solidified coverage here near the gate of the great park. One tower standing alone on an otherwise treeless high plateau is in the form of a fake tree. It’s good enough to fool weaver birds, who have built their large ball-like nests in its metal branches. A fence protects it against elephants who might like to use it as a scratching post. 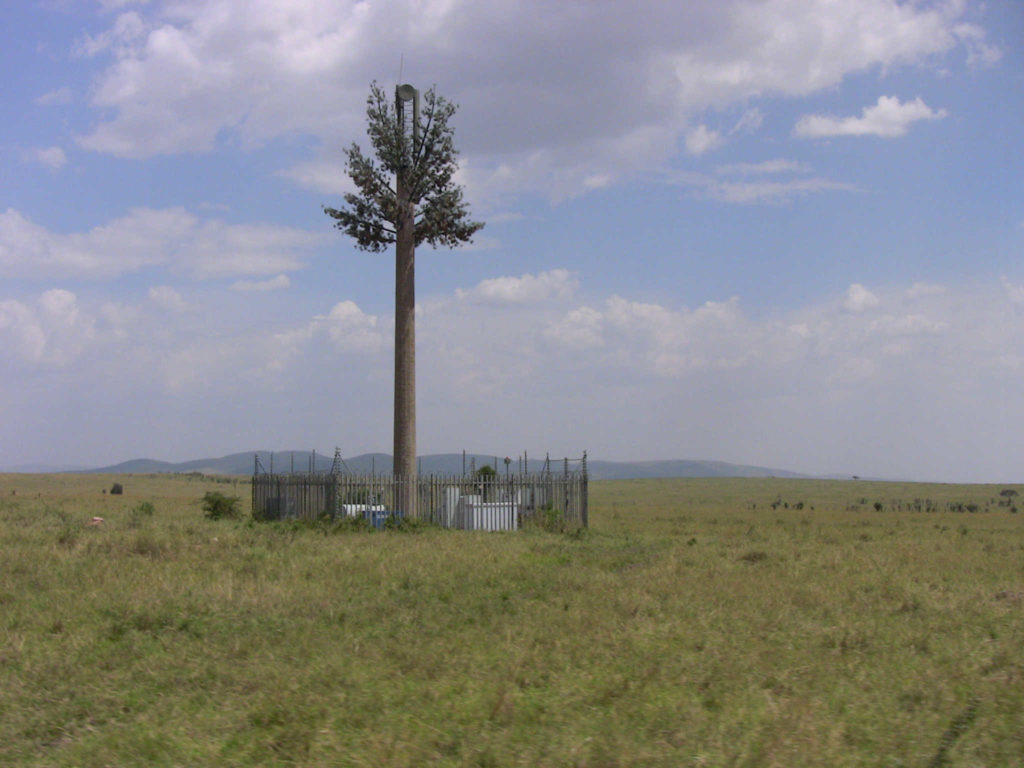 This mobile phone antenna “tree” in Masai Mara national park supports a number of round weaver-bird nests in its branches.

The tree-tower’s signals, and those of its peers, mean that Maasai couples no longer need to each carry a key to a shared lockbox built into their mud houses. Instead, a simple application provided by Safaricom, the dominant mobile operator, is nearly all things money – mobile wallet, bank, and cash. Text messages summon herdsmen from the fields in place of traditional calls. Like other Kenyans the Maasai are nearly all trilingual, speaking Kiswahili and English besides their mother tribal tongue. But English is the favored language for texts, partly for its brevity. Relatives in the distant cities are now in constant touch, and messages and loans and school fees and remittances pass wirelessly through the air.

We will hear similar stories of changes to daily life from the Tilapia fisherman we interview at Lake Naivasha along with the ex-pesticide sprayer turned tour guide, and dozens of other Kenyans we chat with. Over a quarter of Kenya’s entire GDP moves through the M-Pesa payment system, which has over 40,000 local agents in their signature bright green storefronts, or booths, or huts at seemingly every corner throughout the land. As we drive, the red of competing AirTel Money and the orange of Orange Money are far rarer but colorful counterpoints. 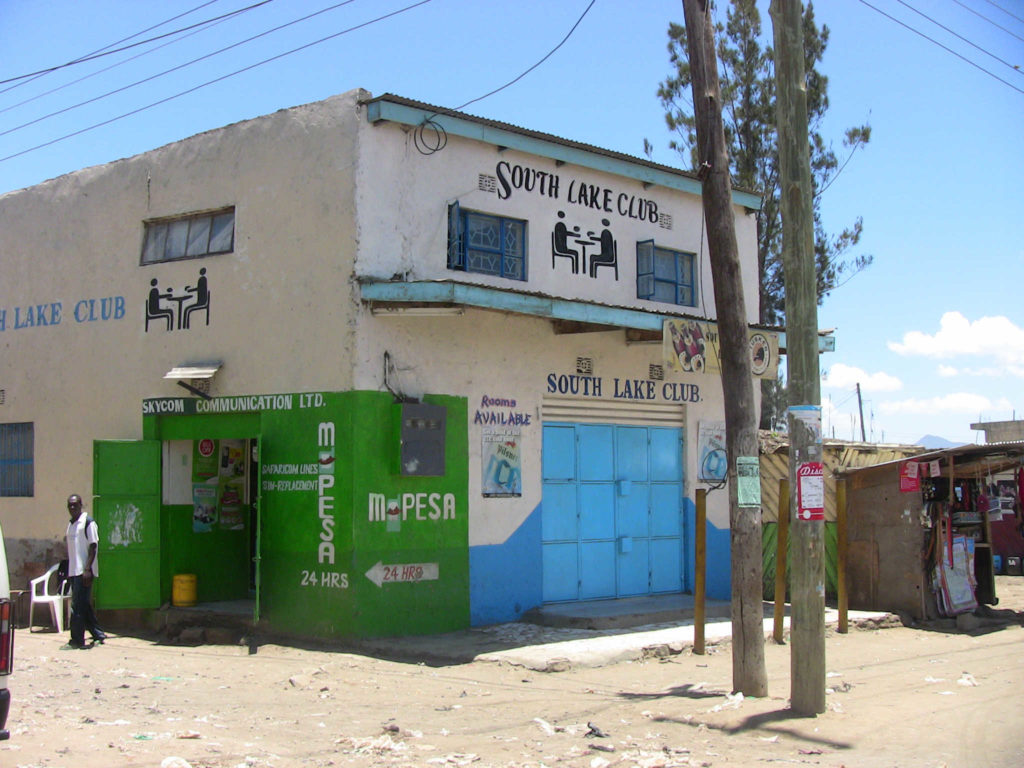 An M-Pesa storefront near Lake Naivasha. We interviewed the agent inside (not pictured).

There are costs to all this change. The M-Pesa system is quite reasonable when it comes to fees; around 2.5%, as compared with 20% or more for the other transfer systems it has largely replaced – mostly Moneygrams and informal courier services provided by bus drivers. But the cost of the data provided by Safaricom and other mobile operators can be another story. For instance, SMS text messages cost little individually, but globally add up to 150 billion dollars per year, or more than global music, videogames, cinema box office, and internet content revenues combined. That’s also 20 times the revenue of internet-based email. Texts serve as the emails, letters, telegrams, and often telephone calls of the developing world, all rolled into 160 character missives. In fact, M-Pesa and many other mobile phone applications are based on a kind of text messaging that supports interactive menus.

For many poorer Kenyans and others in the developing world, communication is now among the major expenses after food and shelter.

Me: Do you have an Internet connection here we could use?

Receptionist: No, I’m sorry, we don’t have Internet; you’re in a camp in the deep bush here.

Me: Oh. Do you have any mobile phone coverage?

Receptionist: Oh yes! We can show you where to sit out front for the best signal.

There are two online worlds in the developing world today. One is for people using computers, mostly city dwellers and Westerners. The other is for ordinary people, using mobile phones. They do intersect at times; even remote tribesman visit Internet cafes. And of course that mobile phone signal in Masai Mara carries internet data just as surely as any hardwired cable connection. But only a few locals have the expensive smartphones that can take advantage of it.

Daniel, a 28 year old father of three, is one of them. While others must go to the cyber cafe to send email or use Wikipedia or Facebook or other popular Web sites, Daniel can check from anywhere, even as he tends the herd. His phone was a major family purchase, and he knows the models and capacities as intimately as any recent car buyer knows horsepower and airbags.

Daniel says he can spend up to 200 Kenyan shillings on daily data charges alone. The rates per megabyte are competitive by international standards, but this is as much as many of his fellow Kenyans earn in a day.

Smartphones are getting more affordable, and others will surely follow his lead to pricey mobile surfing. As a major Internet pioneer points out half-jokingly when I tell him the story, the mobile operators may be bleeding the Maasai as slowly but surely as the herdsman have traditionally bled their cattle for nourishment. 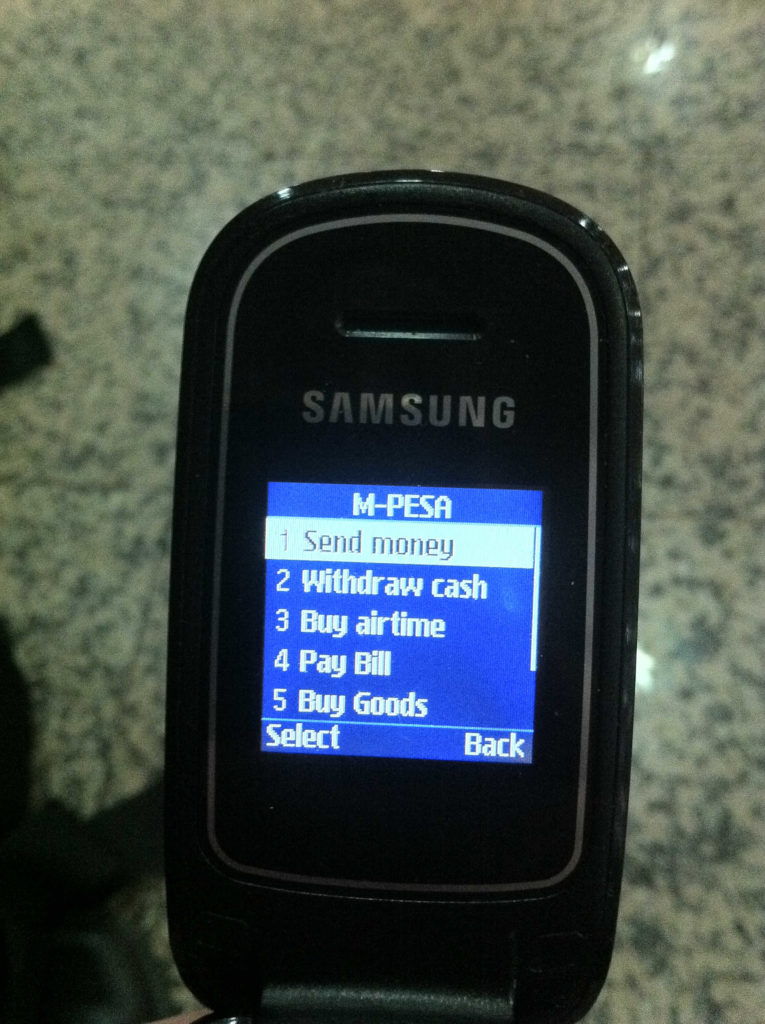 M-Pesa’s simple menus are self-explanatory. Based on an interactive form of texting, the application is pre-loaded on every Safaricom SIM card.

Or it could turn out quite differently. Today there are two billion people on the Internet, most of whom pay for “all you can surf” by subscription or by time –– not by the megabyte. Another two billion people have mobile phones but no internet access, and like the Kenyans we interviewed they pay for every message sent, every ringtone downloaded, every minute of connection time or kilobyte of a Facebook profile pic. There are few pay later, “Freemium” or ad-driven models in the mobile world. Unlike pricey Internet access plans, mobile phones have a low entry barrier – sometimes no money down at all. ip information But from then on it’s cash on the barrel the way telecommunication used to be from the telegraph through Compuserve, before the Web and Internet partly changed the game.

As smartphones bring the Internet to that second two billion and beyond, it may remain a pricey luxury. Or will the pressure of those billions of users – and the competing companies who wish to serve them – change the telecom model after more than 150 years?

This fall I traveled to Europe and Africa to do research and interviews for the upcoming Make Software: Change the World! exhibit, which will include stories about text messaging, Wikipedia, and other topics. My next blog installment: Behind the Curtain of M-Pesa, the leading mobile payment system.