Seymour Cray: The Man Who Brought Style to Supercomputers

A supercomputer is simply a computer that can perform many more calculations per second than the typical computer of its era. The definition is in constant flux. Yesterday’s supercomputer packed the punch of today’s smartphone. From 1969 to 1975, Control Data Corp.’s CDC 7600 was considered the world’s fastest computer, running at 36 megahertz. An iPhone 7, by contrast, runs at 2.33 gigahertz — nearly 100 times as fast as the 7600. 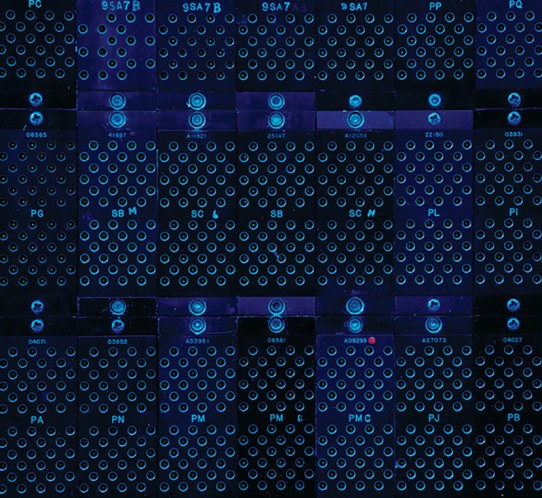 The CDC 7600 was the brainchild of Seymour Cray, who from the 1950s through the 1980s was the undisputed champion among supercomputer designers. Working from a rural laboratory in his hometown of Chippewa Falls, Wisconsin, Cray had also designed the 7600’s predecessor, the CDC 6600.

Each 7600 had thousands of electronic modules, each built from individual transistors and interconnected with more than 190 kilometers of internal wiring. In the photo above are circular testing points for a few of the first 7600 modules, as seen through the computer’s distinctive blue-glass doors.

Cray viewed the aesthetically pleasing design of the 7600 as a break with the past. As he explains in rare footage documenting the computer’s introduction, earlier computers looked more like “black boxes or gray boxes or white boxes.” For the 7600, Cray chose the blue-glass doors and walnut trim as “an experiment in aesthetics,” he said, “and one I’m kind of proud of.”

In the 1970s, with his own firm, Cray Research, he pushed this aesthetic rethinking further with the iconic Cray-1. Its color-coordinated C-shaped column and padded bench, which concealed the power supply, can be seen in this short documentary from the Computer History Museum, about Cray and his legacy:

Seymour Cray, father of supercomputing, was a quiet man from Wisconsin who lived where he wanted to live, worked how he needed to work, challenged bureaucracy when it hindered progress, and, when necessary, humbly started over. His dogged persistence and staggering genius resulted in the fastest computers on earth. Produced by the Computer History Museum, 102695603...

With a price tag of US $5 million (about $34 million today), the CDC 7600 was affordable only to governments and large companies. The U.S. government and military, particularly the national laboratories responsible for nuclear weapons R&D, were key customers for Cray’s supercomputers. Even now, supercomputers are used for military and intelligence work, but applications have broadened to include weather and climate modeling, geophysics for the petroleum and mining industries, and scientific calculations of all kinds.

For more on Seymour Cray and his innovative designs, see the Computer History Museum’s online exhibition on supercomputers.

This article appears in the August 2017 print issue as “Style in Supercomputing.”