With a little training, can computer history museum employees more familiar with a mainframe from the 1960s than the latest app become active storytellers and promoters on social media? Would they feel empowered to adapt unfamiliar tools and could they expand the Museum’s reach to new audiences? Those were the questions that motivated CHM to apply for a “Museums Empowered” grant from the Institute of Museum and Library Services in 2019.

The Institute of Museum and Library Services Grant ME-245650-OMS-2 was awarded in fall 2020 and ended in February 2022, greenlighting CHM’s project. We learned a lot, and we hope our experience might help other institutions understand the challenges and rewards of developing an in-house social media initiative. Please note that the views, findings, conclusions, or recommendations expressed in this post do not necessarily represent those of the Institute of Museum and Library Services.

Over three billion users access social media platforms, and CHM realized that they are a necessary channel if the Museum is to meet its vision to vastly increase its global reach. And, CHM’s computer-oriented audience, its one-of-a-kind artifacts, and its diverse slate of public events lend themselves perfectly to targeted, real-time social media to engage visitors on a global scale. However, in 2019, CHM lagged behind more successful peers in terms of social media engagement, with 4,470 followers on Instagram, 4,986 on LinkedIn, 35,136 on Twitter, and 115,790 on Facebook.

The reason for this was simple: CHM had not devoted the necessary staff and resources to social media. Growing an institution’s social media presence relies on the participation of its employees, and there was no culture of social media usage at CHM. The very small marketing department had made significant progress over the years, but they could not alone grow a robust social media following. 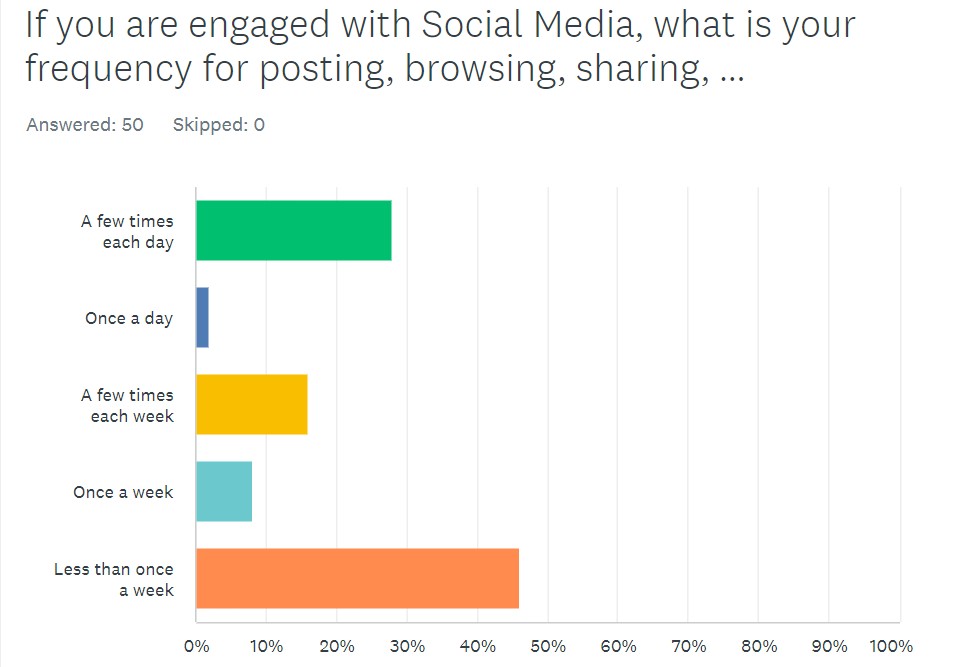 In a CHM employee survey taken in October 2019, 68 percent of the CHM staff said they were actively engaged with social media. Of those, 54 percent posted or browsed only once a week or less, and only 12 percent contributed content or started a conversation on social media. While there are no readily available comparison studies of employees at other museums, CHM staff fell below national averages for general social media usage.

The goal of the project was to create a roadmap for CHM’s social media activities and build a robust team of in-house social media “experts” at the Museum capable of engaging new, broader audiences with CHM’s content and resources.

The first step in the journey involved engaging Edelman, a PR and marketing consultancy firm, to develop a comprehensive social media strategy for the Museum. Edelman then trained a cross-department team of twelve staff members in the use of the specific social media tools they deemed most appropriate for our materials and target audiences: Twitter, Instagram, and LinkedIn. They emphasized the critical role of employee advocacy on social media for an organization.

In addition, the CHM team took self-paced social media and content marketing courses through ClickMinded. The Marketing Department added a part-time employee dedicated to supporting the social media strategy and training. CHM’s contracted designer developed an image library and conducted workshops to help employees understand the Museum’s brand and how it can be applied to social media posts to ensure a consistent look and feel. 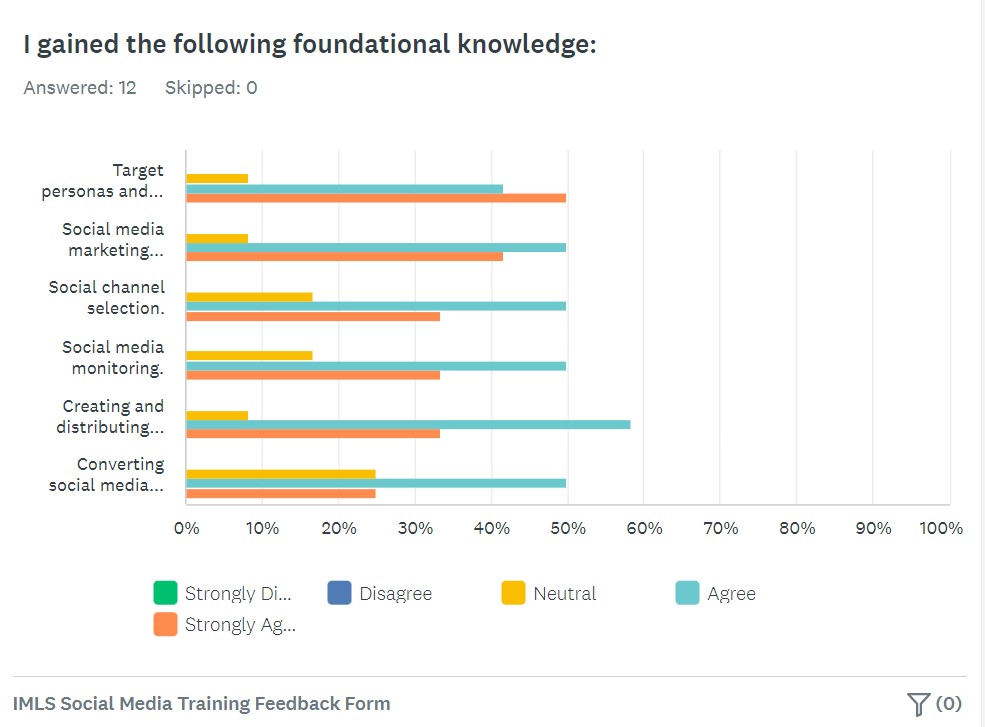 Like every organization, the COVID-19 pandemic greatly impacted CHM. Employees moved to work from home and priorities shifted as the Museum pivoted to all-virtual programming. Despite the disruption and challenges, employees were able to spend time putting into practice the new social media strategy. 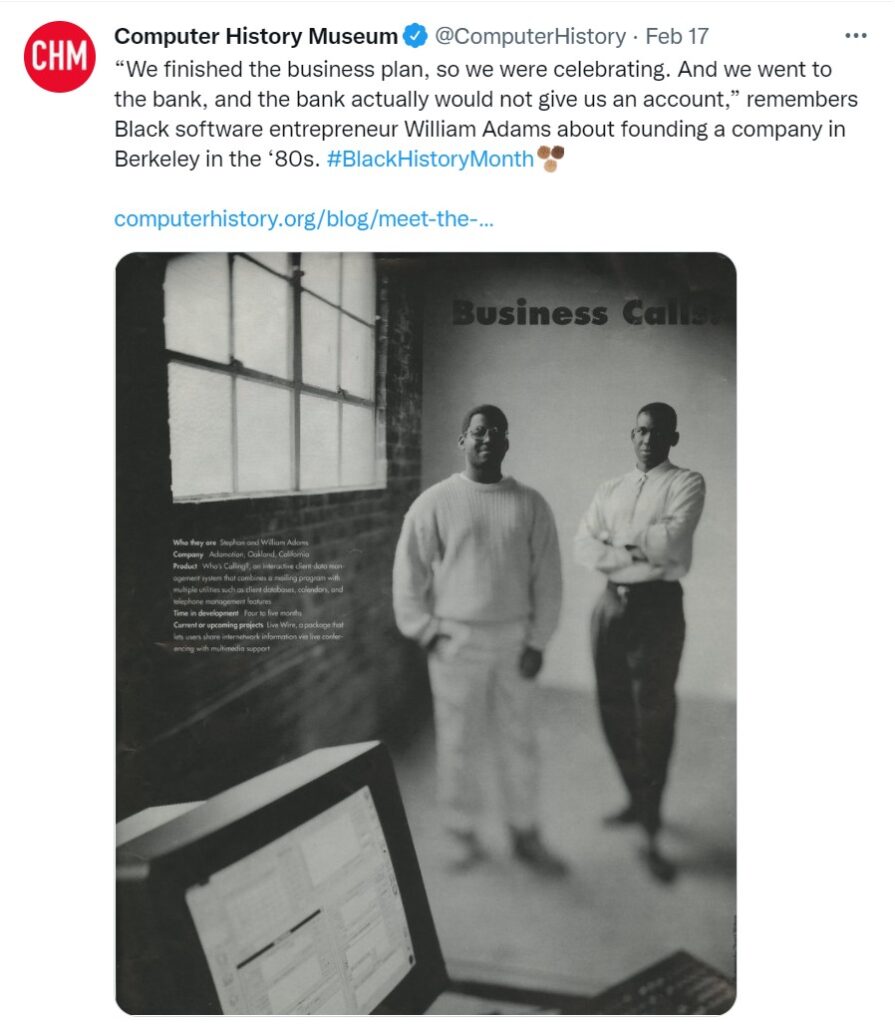 An example of tweet in a series of social media posts for Black History Month.

Over the course of the grant period CHM gained 2,000 additional followers, although we are currently moving to place more emphasis on engagement rather than followers. In the year before the grant began, employees posted 462 times; during the grant period, over 1,000 posts were made.

The employee survey at the end of the grant period in February 2022 demonstrated an increase in engagement with social media from the 2019 survey. Seventy-seven percent of employees now said they were actively engaged (up from 68 percent). Fifty-three percent of employees used social media on behalf of CHM once a week or more. Of all museum employees, 75 percent had engaged with CHM posts during the grant period.

Results of a survey question demonstrating that employees feel social media is an important strategy to reach new audiences.

Further, over 93 percent of employees believe that social media should be either an important or very important part of a strategy to reach new audiences. One employee noted that, "Forwarding and retweeting CHM posts is my default position." Another said, "I didn't used to pay much attention to CHM social media, but now I try to check CHM's posts on LinkedIn to like/share when appropriate."

The following lessons learned will hopefully help other museums and institutions as they consider their own social media strategies.

If pursuing a similar project through an IMLS grant, plan for price increases for the online training courses, especially given the year-long period between application and award. CHM was surprised at how much prices increased (5%—8%); fortunately, in part because of its non-profit status, the Museum was able to negotiate lower rates with the course providers. We highly recommend the Social Media Marketing Course from ClickMinded.

A source of confusion about the project developed about what kinds of posting and sharing the social media team would be engaged in; some team members thought that they would be utilizing CHM’s official social media accounts to post directly to social media. However, due in part to both logistics and liability issues, only CHM’s Marketing team members have the authority to officially post on social media on behalf of CHM.

It should be made clear from the beginning that the role of the broader social media team is to contribute to the ideation and creation of social media campaigns and posts, share Museum content with their own networks, and, when appropriate, create their own posts and content related to Museum events, artifacts, etc. that they can post in their networks. In addition, we learned that simply “liking” CHM posts had a useful multiplier effect. At the very least, museum employees can be advocates in this way.

In addition, while privacy and security concerns were not particularly high, it is important to note that there was some hesitation from a few employees about using their personal accounts and networks to engage with CHM on social media channels.

Over the course of the grant period, it became clear that because team members were not in the habit of using work time for social media activities, their engagement was sometimes spotty and inconsistent. Generally, it became an activity that was pursued primarily when people felt they had some free time. 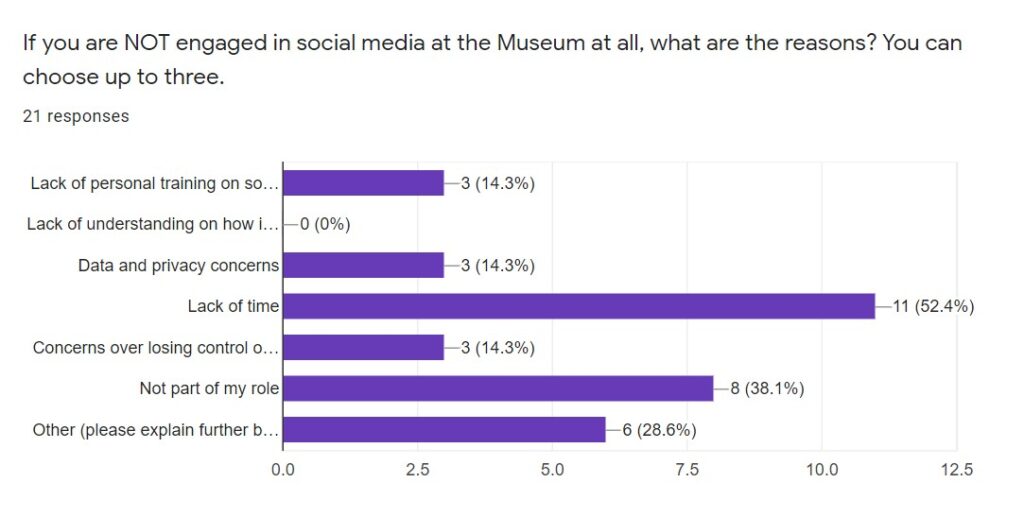 Results of a survey question demonstrating how lack of time contributes to employees not engaging with social media.

Managers need to ensure that time for social media activities is incorporated into employees’ daily activities and responsibilities. Without explicit “permission,” established goals, and leadership buy-in, these activities may often be sidelined in favor of other priorities and deadlines.

Given the speed of effective social media, employees who post must be empowered and have the appropriate tools to manipulate images, access permissions, and easily create video clips or other engaging material for posts. CHM’s internal review process sometimes slowed down posts, and image manipulation, which occasionally required the help of our off-site graphic designer, also made it difficult to post quickly at times.

A media library, image templates and guidelines, and other tools can go a long way toward facilitating how quickly employees can create posts and engage in a timely fashion. A streamlined review process is also necessary if oversight is needed. An onerous process—too many people who need to review, slow feedback, etc.—can also slow down the pace of posts and reduce employee motivation and momentum.

An example of how templates and guidelines convey the CHM brand and unify posts within a channel, in this case a series on “tech gifts of Christmas past” on Instagram.

Partway through the project, CHM began development of a robust Digital Asset Management System. It will allow employees to access and share artifacts and images in our collections and marketing archives, manipulate them, and share with each other, all without affecting the original. This system will empower employees to more quickly and easily create compelling, timely, posts and share assets with their colleagues.

We discovered hidden talents for photography, writing engaging posts, coming up with interesting campaign ideas, and other skills among CHM employees. 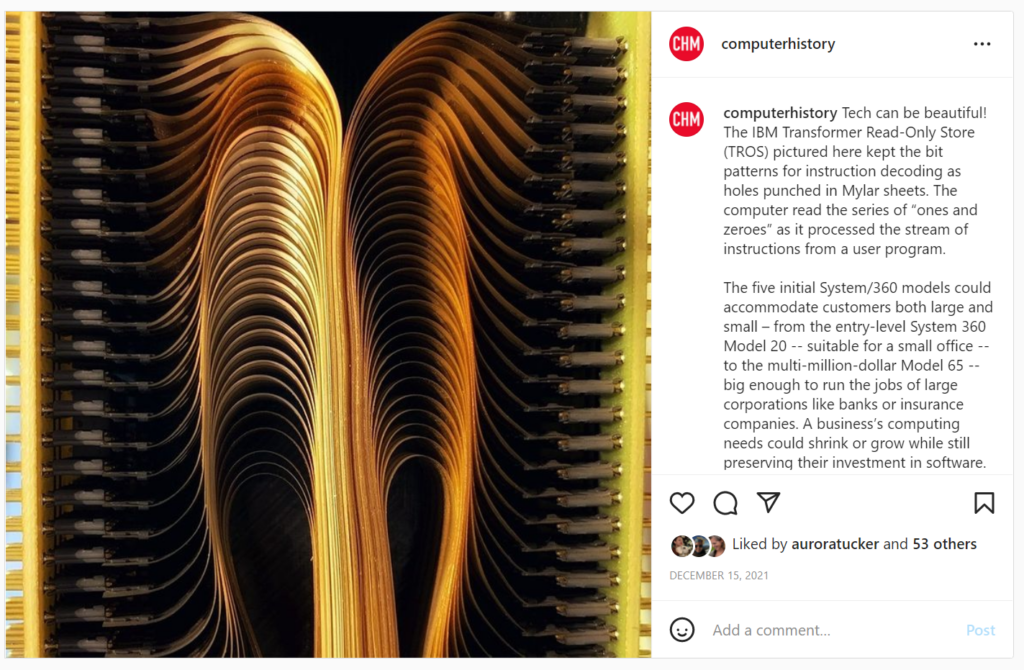 An example of a social media series on “beautiful tech.”

Employees’ skillsets can be a great asset, but they are not a substitute for a dedicated staff focused on marketing and community engagement. If there are resources available, it is important to hire specialists who can guide employee efforts, either as consultants or in-house.

The grant support for this project was extremely valuable in helping CHM to understand our institutional strengths and weaknesses in content marketing and social media engagement. We now have a strategy for moving forward. Our culture has shifted, and employees appreciate the power of social media and feel more comfortable getting involved. Next steps involve ensuring that CHM leadership also fully understands the value of employees actively engaging in social media efforts and encourages them to do so. Tasks associated with social media must be incorporated into job descriptions and performance review processes.

We look forward to a future in which all Museums enjoy the power of social media and other technologies to bring their stories to broader audiences and to engage everyone in conversations about what it means to be human in our digital age.

Need some help? Download our training resource. You may also be interested in learning about another IMLS-supported prototype project that explored using artificial intelligence and machine learning tools to help make CHM's collections more accessible.

Image caption: From a tweet for the 60th birthday of video game Spacewar! Photo by Mark Richards.