An Icon Shares Her Story

Margaret Hamilton is literally iconic. She is also intensely private, having never given a full-length interview about her life and career. That is, until now. That Margaret Hamilton was deservedly renowned for her achievements in computing is clear: In 2016, President Obama awarded her the Presidential Medal of Freedom, and in 2017 she became a Fellow of the Computer History Museum.

That the software pioneer had moved from distinguished to iconic truly struck home for me in December, when I walked into the Smithsonian’s beautiful Arts and Industries building to see its newest exhibit, “FUTURES.” In this expansive exploration about imagining different futures for ourselves, now and in the past, one of the very first things a visitor encounters is a display about Margaret Hamilton and her remarkable contributions to the software of the Apollo Guidance Computer, which brought American astronauts safely back and forth to the surface of the Moon. 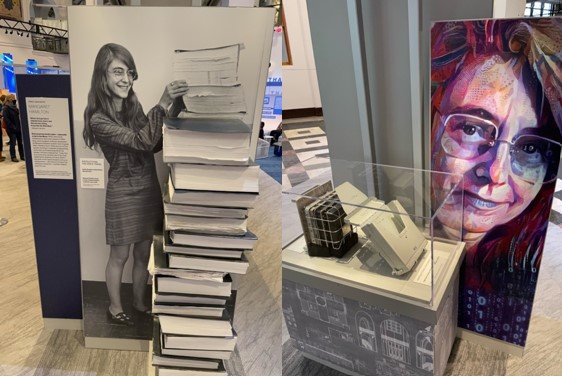 Margaret Hamilton as an icon for software and space achievement in the Smithsonian’s “FUTURES” exhibit, photographed in 2021. Photos by David C. Brock.

The photograph of her standing beside a tower of printouts of Apollo Guidance Computer source code has itself become an iconic image, widely used to illustrate many discussions of the history of women in computing. It is but a click away in the Wikimedia Commons for authors, photo editors, students, and exhibit designers alike.

This photograph and Hamilton’s persona as a symbol of technical achievement blend together in the iconography of a recent Lego toy set, “Women of NASA,” in which Hamilton was one of four featured figures. 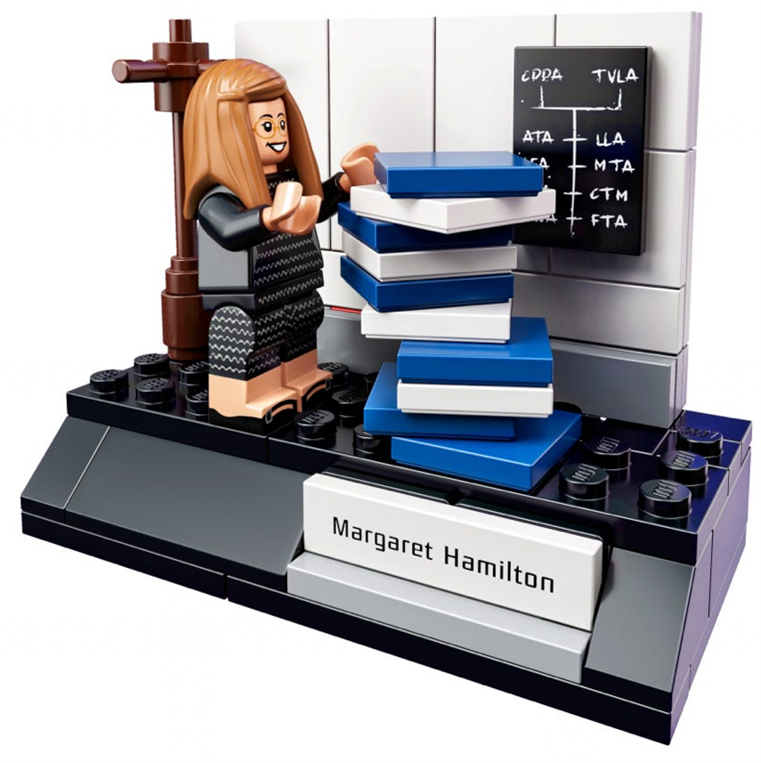 The Computer History Museum has also played on Hamilton’s iconic status, incorporating her as an avatar guide in the Museum’s new Minecraft: Education Edition world, The Great Tech Story, drawing players into experiences about software. 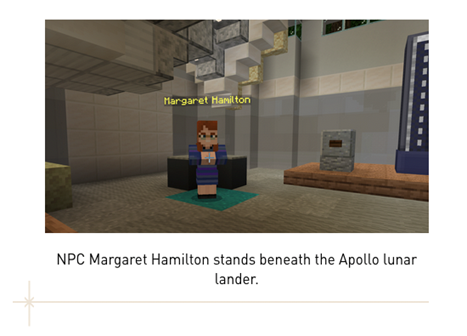 The roots of this iconography reach down into the remarkable history of Hamilton’s engagement with software starting in the 1950s. Her first exposure to programming came at MIT, where she programmed meteorological simulations for Professor Edward Lorenz, one of the foremost figures in the development of chaos theory. It is Lorenz who popularized the notion of the “butterfly effect,” the concept that a small difference can yield a huge change within certain systems, like the flap of a seagull’s wing causing a storm, or the flutter of a butterfly’s wing determining the path of a tornado.

From there, she became a contributor to the SAGE system at the Lincoln Laboratory, working on software to distinguish the radar signature of aircraft from electronic noise. It was a matter central to the US military’s Cold War effort. From SAGE, she joined the effort at MIT to build the software for the Apollo Guidance Computer. This software would eventually prove central to the astonishing success of the Apollo program and achieving the goal of landing a human on the Moon.

During her work on Apollo, Hamilton became highly attuned to issues of error and reliability in the Apollo Guidance Computer software. She and colleagues did a careful study of the software errors that had arisen, scrutinizing and categorizing them according to cause. Avoiding these errors by circumnavigating their causes became the focus of her career forever after. She founded two companies to pursue this work, leading the development of new formal methods and languages for creating error-free and reliable software and systems. She continues this work at the time of this writing.

Behind all this accomplishment and iconography stands a very real, and very private person. For someone who has devoted her professional life to avoiding error and building reliability, it would seem that the ambiguities of history, memory, and expression are not entirely comfortable. She rarely gives interviews or speaks publicly about herself. Or perhaps it is simply the fact that whatever she says, people will be listening closely. In any event, the Computer History Museum had the rare opportunity to record a lengthy oral history interview with Margaret Hamilton in connection with her 2017 CHM Fellows award. After careful review and annotation, the transcript and video of this oral history are now available online.

Below is a series of short selections from this oral history, highlights of Margaret Hamilton telling her remarkable story in her own words.

Margaret Hamilton describes her favorite classes and hobbies as a youth.

Margaret Hamilton reflects on her aspirations as a youth.

Margaret Hamilton describes her most memorable job as a teenager.

Margaret Hamilton decides not to become a human computer.

Because You're a Girl

Margaret Hamilton has a job interview in a bar.

Margaret Hamilton decides she’d like to help put men on the moon.

Margaret Hamilton writes the code for an aborted mission.

Margaret Hamilton explains how she relied on her keypuncher.

We Have a Problem

Margaret Hamilton’s full oral history (see the transcript or the video) is part of the Computer History Museum’s Oral History Collection, an invaluable open resource of over 1,000 remarkable stories. To learn more about it, and to begin your own explorations, visit the collection.

Thanks to Margaret Hamilton for her generosity of time and concern for this oral history, and to CHM’s Heidi Hackford and Max Plutte for their efforts on this blog post.