What is software? You can’t taste it, smell it, or touch it but they say it’s everywhere and it’s changing our lives forever. Since I started working at the Computer History Museum back in 2000, I’ve heard curators, trustees, volunteers, almost everyone, talk about how we need to tell the story of software. 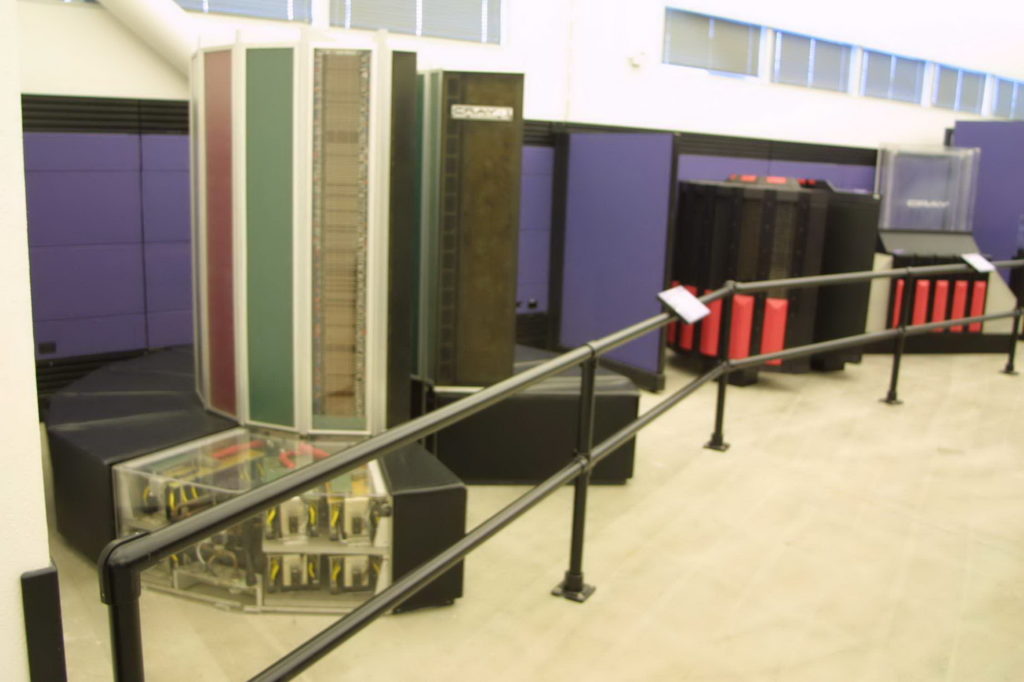 In 2003, the Museum opened an object-based exhibit called “Visible Storage.” The exhibit was essentially open access to the collection with very little interpretation.

Way back when the main exhibition at CHM was Visible Storage, most of the gems in the collection were on display but with minimal interpretation. The primary visitor experience was a docent-led tour. The docents held the stories in their heads and navigated visitors through various storylines. It worked but had serious limitations, especially for self-guided visitors.

In 2011, the Museum opened a new permanent exhibition Revolution. It’s an outstanding exhibit that makes use of a variety of exhibit techniques: videos, models, hands-on interactives, graphics and yes, artifacts. Visitors still enjoy docent-led tours, but now docents can focus on helping visitors to make interesting connections between exhibit areas. 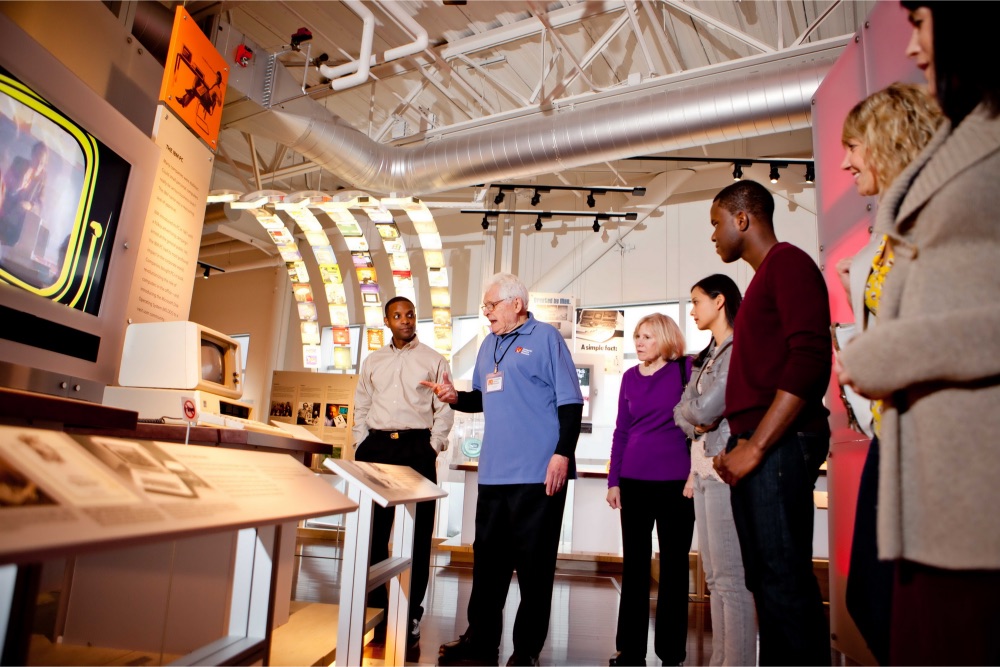 But still, some people still go through Revolution and say “this is a hardware exhibit.” Many of them are of a generation that divide the world into hardware and software. Today hardware and software are more integrated. Certainly, as a non-technical person, I don’t divide the world into hardware and software. The objects in Revolution are historic artifacts to me. They are no more illuminating about hardware than they are about software because I can’t “read” them without help or interpretation. Artifacts can tell many stories, hardware, software and more. So if you take your time in Revolution and actually read the text panels and watch the videos you will find lots of software stories throughout Revolution. One of my favorites is the Software Theater featuring an overarching eight-minute film, The Art of Programming.

That said, the challenge remains: What about a dedicated software exhibit?

After the Revolution exhibition opened to the public, we completed a thorough exhibition evaluation with outside consultants. Generally, visitors were blown away by the exhibit. They expected computer history to be dull, maybe just a bunch of PCs or something. They never imagined the story to be so old (2000 years!), so complex, so diverse and full of interesting people. One consistent refrain from visitors in the evaluation was the desire to understand how computer history relates to them. How has it changed an average person’s life? They wanted to see themselves in the story. I’m not surprised. In the exhibit development world, we call that “meaning making.” Or a more pointed expression is the “So What Factor” (let’s call it SWF for short). Learners need to relate to a story on a personal level in order to make sense of it. In marketing, they call it the “hook.” 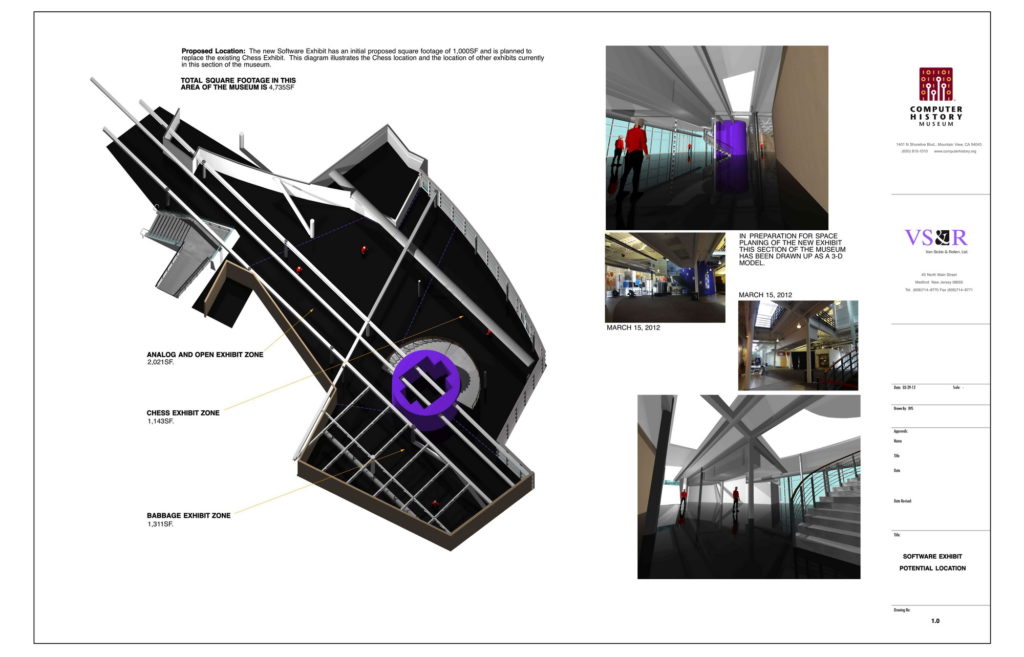 With that in mind, we took the software exhibit challenge and combined it with the “SWF” and came up with our new exhibition underway, Make Software: Change the World! This new exhibition represents an opportunity to explore how to interpret the history of software but also how to make computer history meaningful to average people. It also provides an opportunity for the curatorial team to collect and interpret computer history in the post-1985 timeframe, an area of our collection that is a bit less developed than others. Finally, a focus on impact will take us in new interpretive directions. The exhibit will not only tell the ‘maker’ or creator story like Revolution does, but will also explore the ‘user’ story and that gets at the heart of the “SWF,” doesn’t it?

At the core of the new exhibition will be a Software Lab, where visitors will explore what software is and how it is made. We want to demystify the notion of programming and create a series of interactives with different entry points that will allow people to try their hand at programming. However, focusing on programming is not enough. Making software is so much more than programming. The Software Lab will also feature a documentary that will showcase a company in the process of developing a software product. Visitors will be exposed to the many steps and roles that go into software development, from programming, to testing with users, to marketing and deployment. The concepts in the Software Lab will be extended through education workshops and online STEM-based curriculum aids for teachers.

But that’s not all, the Software Lab will be surrounded by 7 inspiring stories about software or applications that have had a huge impact on people’s lives. We consider these initial stories because there are so many interesting stories to tell in a Make Software: Change the World! framework and we hope to change them out over time. To start, we have chosen: Photoshop, Car Crash Simulation, World of Warcraft, Texting, MRI, MP3/iTunes and Wikipedia. You might wonder, wow, why those? Each story stands in for a larger story about either the type of software (car crash simulation = visualization software), or how it was made (Wikipedia = crowdsourcing), its role in providing an infrastructure (MP3), a story about how relatively simple software can have a big impact (Texting) or the surprise factor, e.g. “that thing has software?” (MRI). The most important element however is how “relatable” the story is to an average person’s life, either they’ve used it or they can readily understand it. That’s the hook, and from there we can take our visitors on an amazing journey about what software is and how it is made and its immense potential. Hopefully the exhibit will inspire visitors too. Here is some conceptual imagery for each of the 7 highlight stories: 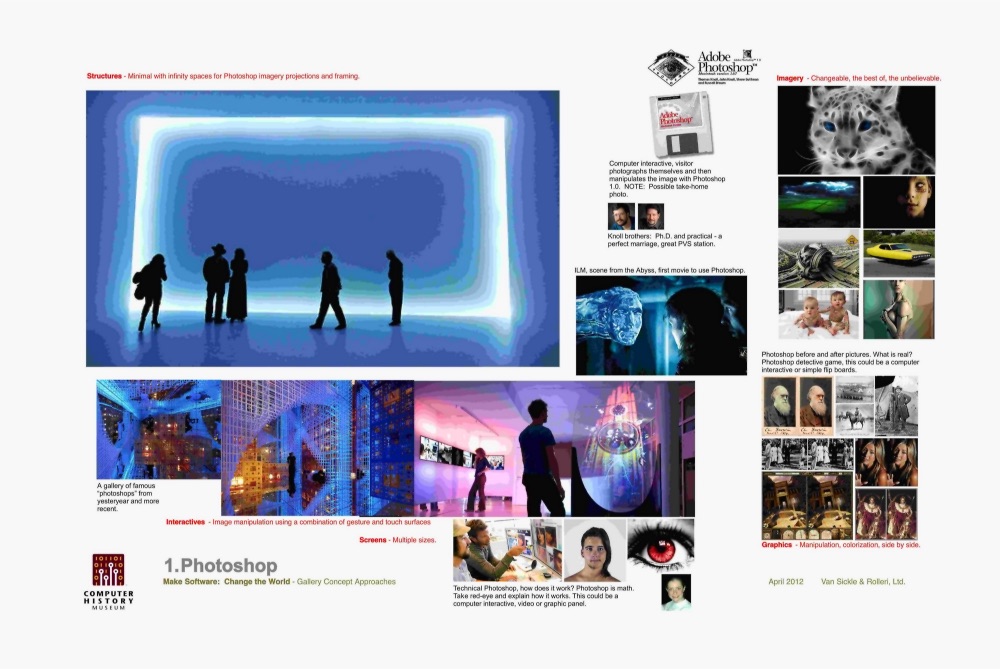 Adobe Photoshop is the most-used image editing software in the world. 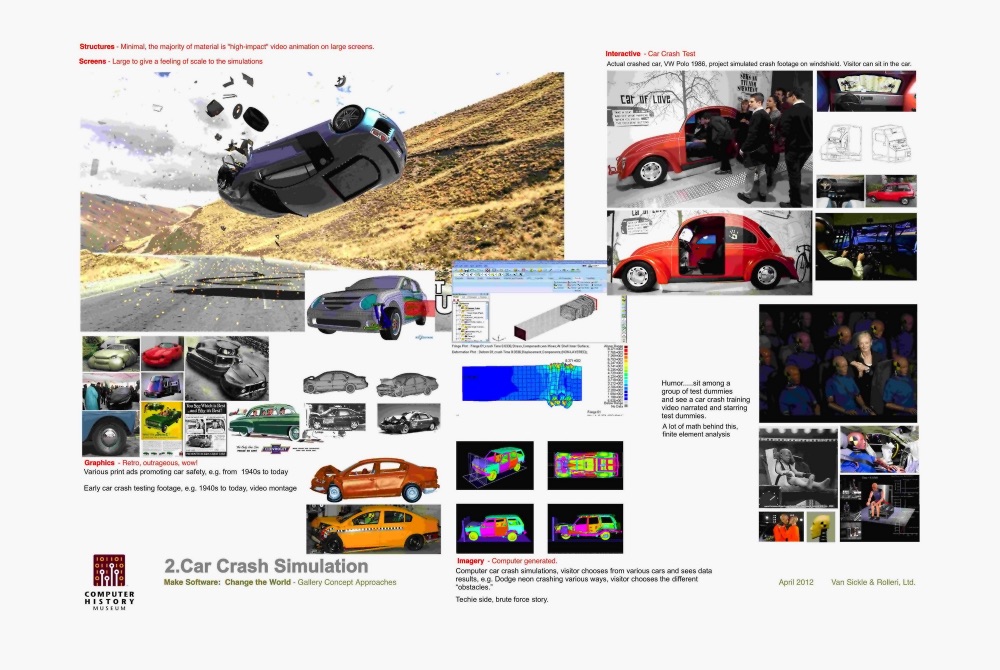 This car crash simulator is used to calculate how to keep passengers and drivers safe when they get into accidents. 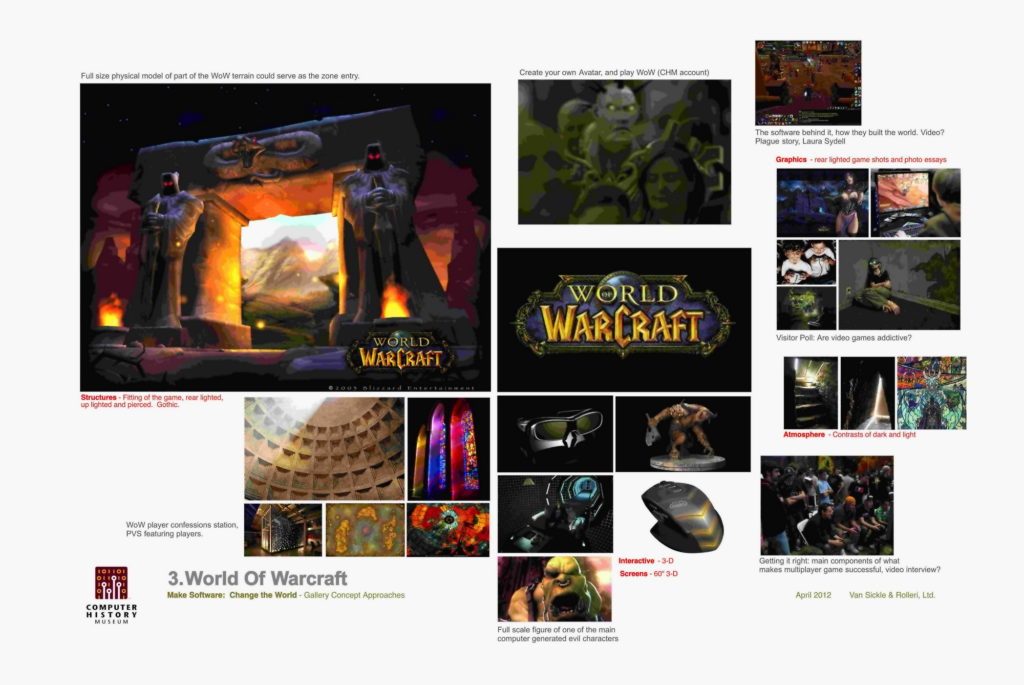 World of Warcraft kickstarted the MMO craze, and boasts over five million subscribers to this day. 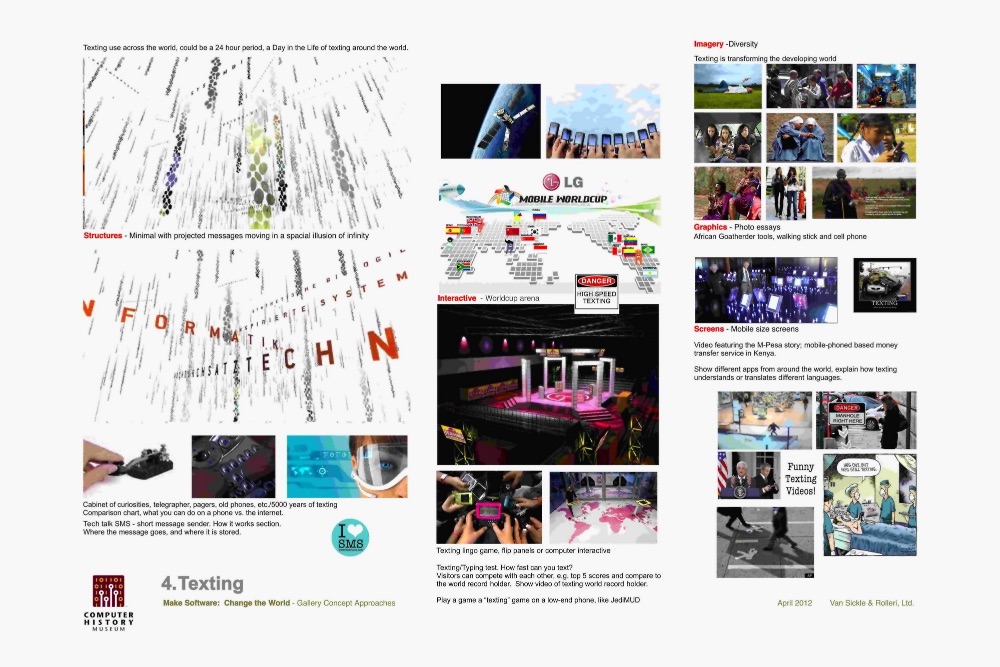 Texting revolutionized global communication, and is being used as the first gateway to the internet for developing  areas. 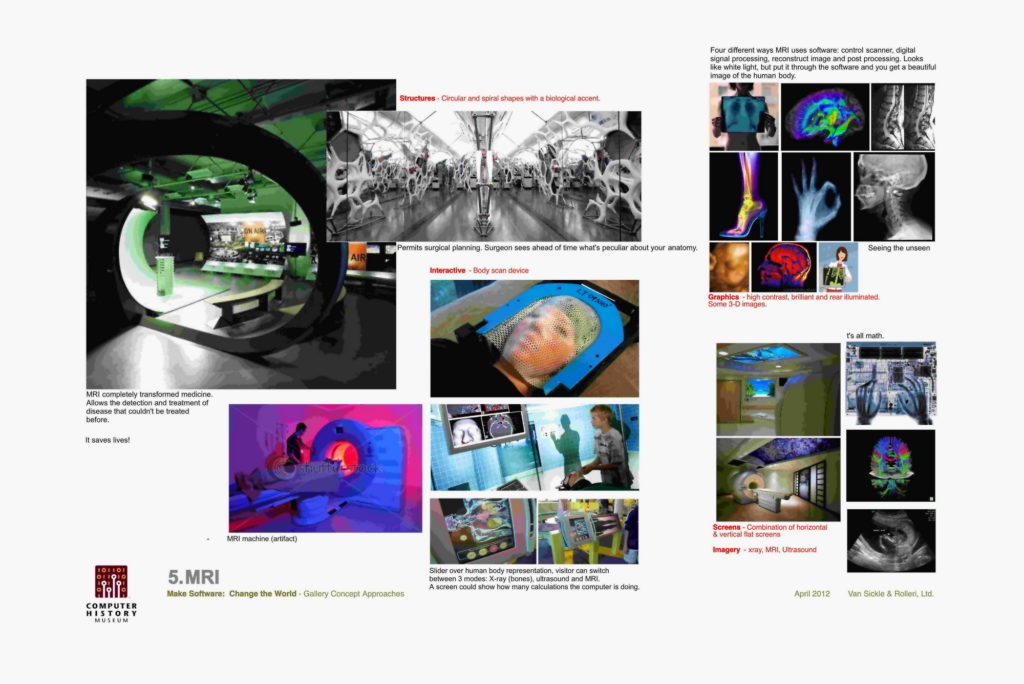 MRIs help detect all sorts of neural problems, and the software that runs them can help detect even more over time. 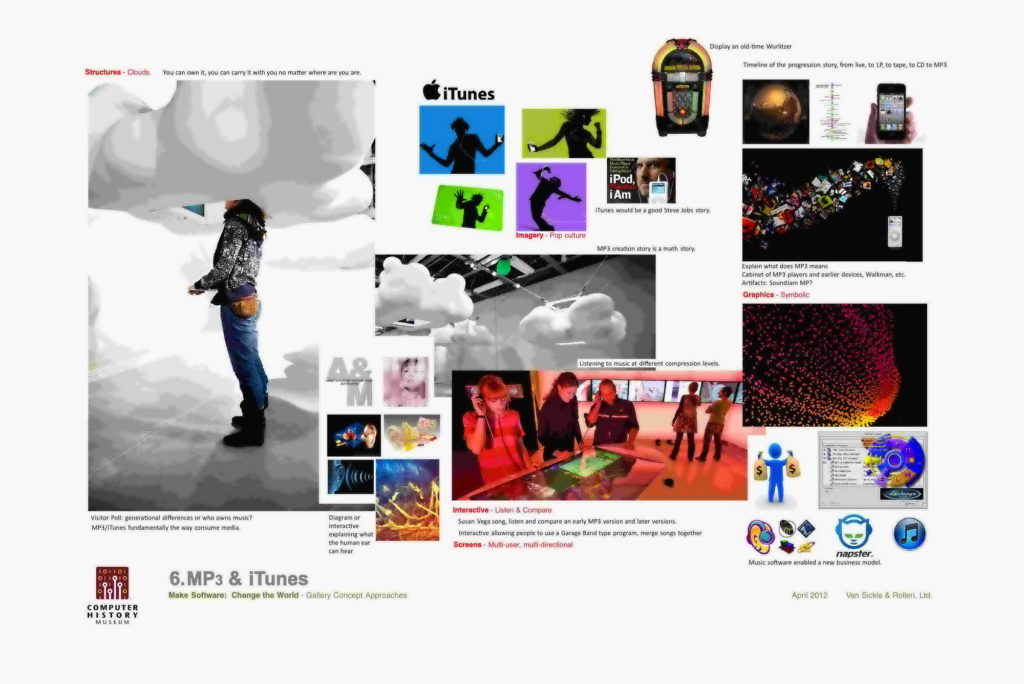 With the advent of MP3 players and software like iTunes, you could have hundreds or thousands of songs at your fingertips at any moment. 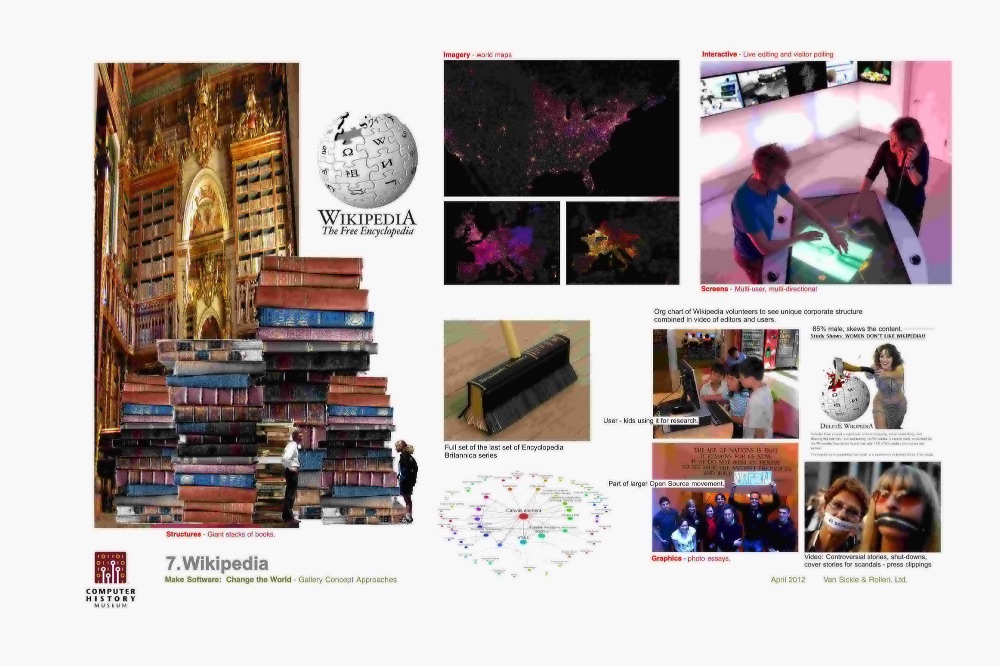 Wikipedia is the largest and most comprehensive encyclopedia in the world, and it's free to use thanks to the tireless work of contributors from around the globe

Finally, we are excited about developing hands-on interactives for this exhibit. We are developing interactives for the Software Lab and each of the 7 highlight stories. In addition to exploring programming concepts, visitors can try photo editing, crash a car in simulation, wander through the World of Warcraft, explore the human body with amazing MRI imagery, compete against the world texting champion and much more.

As you can tell by now, I’m pretty excited about this exhibit. Our next step is to move into more detailed design. We will use this blog to provide updates as we go through the development process. Funding permitting, this new exhibition will open in early 2014.

Kirsten Tashev oversees CHM’s collections, curatorial, exhibits, and media teams. Tashev joined the Museum in 2000 and has played a key role in its strategic direction. Prior to CHM, she led the development of several large scale new museum projects across the country.