Homelessness: The Problem that Even Silicon Valley Can’t Seem to Solve

Silicon Valley is known for a lot of things: The co-invention of the microchip, the launch pad for the venture capital industry, the home of Google, Facebook and Apple, the setting for HBO’s hilarious send-up of tech culture.

We can now add one more thing to the list: Homelessness.

The problem isn’t new, but it’s growing. And so is the attention the rest of the world is paying to the dramatic juxtaposition of some of the country’s most expensive neighborhoods and citizens who live in tents under overpasses or in vehicles out on the street.

Homelessness in the Valley has become a front-page story again in part because of the spread of COVID-19. One of the first major struggles for Bay Area health officials and politicians was the challenge of preventing the spread of the new coronavirus through a population of people who often live close together, suffer from pre-existing illnesses, and have fewer opportunities to practice basic hygiene than the housed population.

Santa Clara County, which is the heart of Silicon Valley, turned to putting the homeless up in hotels and convention halls. Meanwhile the state of California lined up 15,000 hotel and motel rooms to house the homeless.

Most days homelessness provides a steady backbeat to the frenetic chorus of technological innovation in the Valley. But then there are days like the one when the Wall Street Journal published a front-page story about a growing Silicon Valley trend.

Right. Silicon Valley on prominent display in the Wall Street Journal. What’s so different about that? But this story wasn’t about the latest unicorn or newest gig startup or biggest acquisition or soaring stock price. This was a story about people living in RVs parked on the streets of Silicon Valley.

The number living that way in the Valley has tripled since 2017, the story said. It opened with the scene on Continental Circle in Mountain View, CA, a few miles from the Computer History Museum (CHM), where RV’s started appearing “about four years ago. Now they line one side of the half-mile-long street in this Silicon Valley suburb.”

You can see them there using Google Earth, part of a world-changing platform that was developed about five miles from the motor home encampment.

My heart goes out to the housekeeper, who lives in an RV with her two kids, now that they can no longer afford their apartment in a city where the average one-bedroom rents for about $3,000 a month, according to Rent Jungle. And I feel for the others who have little choice but to live in broken-down campers. But I can’t help thinking, “haven’t I read this story before?” when I see such stories.

And, of course, I have. I’ve even written the story before.

Thirty years ago, I wrote my first major story about homelessness for the Mercury News, Silicon Valley’s daily newspaper. It was a story about how the city of San Jose and Santa Clara County were coming together to move a homeless community of 200 away from the banks of the Guadalupe River. They were trying something new: Assembling all the social services that could help together in one place, so that those being moved from the river weren’t only being shuttled from place to place, but were also being given a path to being housed.

I’d write 164 more stories about homelessness in Silicon Valley before leaving the Mercury News for a job at a valley startup. Somewhere, maybe around story 100 or so, I have to admit that I started to wonder whether there was any way to solve homelessness.

One of the 164 was a story about a protest march—2 ½ miles from the Santa Clara County Government Center to San Jose City Hall. The marchers were homeless advocates and those from organizations who help the homeless and the homeless themselves. I walked along with them in 2007 and wrote of the marchers:

"Such optimism and determination are inspiring—and heartbreaking. As I watched the crowd move out—the young, old, black, white, Asian, Latino, those in wheelchairs and those in strollers—I couldn’t help but wonder what keeps them going. How can someone commit to a problem so vast, so intractable, so hopeless? I can’t remember a time the homeless weren’t with us and I can’t imagine a time they won’t be."

After my column appeared, one of the organizers excoriated me. How could I say homelessness would never be solved? How could I belittle the work he was doing and the faith the marchers held that the challenge could be overcome.

I explained that I just didn’t see a way. And I still don’t. But I’m thinking about homelessness and efforts to end it differently today. Today, I think improving the problem and making progress is enough. It’s a very un-Silicon Valley thought.

Peter Hero, the former CEO of what is now the Silicon Valley Community Foundation, once told me that it was difficult to persuade tech titans to donate to homeless initiatives. The results were hard to precisely measure, and the tech crowd needed to measure success by clear metrics.

The reasons for homelessness are many and varied. On an individual level, everything from addiction and mental illness to bad breaks and bad decisions figure in. On a societal level, there is a laundry list that has contributed to the Valley’s housing crisis, which contributes to homelessness.

There are zoning restrictions and neighborhood resistance to multifamily development or even more single-family development. There are high construction costs and the discontinuation of a state program that provided money for affordable housing.

And there is the simple matter of supply and demand. Between 2010 and 2018, the Bay Area’s population increased by 8.4 percent, driven in large part by the need for tech talent to fill new jobs, CNBC tells us. But the increase in the number of housing units hasn’t even cracked 5 percent in that time.

And, frankly, there are those tech workers themselves, of which I am one. Silicon Valley has stretches of its own beautiful scenery and is close to some of the most beautiful scenery in the world—the Pacific coast and the Sierra Nevada mountains. The weather is gorgeous. It’s a nice place to live, which keeps demand high.

But there is only so much developable land, which keeps supply low. And as companies like Google, Cisco, Facebook, Apple, Intel, Hewlett Packard, Oracle, Adobe, and others grow from two-person, garage startups to global corporations with tens of thousands of workers and major campuses, they need talent.

There is a bidding war for the best talent, particularly engineering and data science talent. People are paid handsomely, which allows them to buy homes, an exercise that also involves a bidding war. New talent coming in needs to be paid handsomely in order to be able to afford the homes that cost so much, in part because property values have been bid up by handsomely paid workers of an earlier era.

It’s a lot to overcome and address. But there are signs that powerful players are becoming more engaged. The Valley’s biggest corporate citizens—Apple, Alphabet (Google’s parent), and Facebook (with other partners)—have pledged a total of $4 billion to support housing and build affordable homes in their own backyards.

Affordable housing advocates say the plans won’t do enough and it’s hard to imagine that those living in tents and RVs will have an easy time qualifying for loans and even rents in an area with staggering housing costs. One key will be to see whether big tech is simply checking a box or whether its efforts to ease the housing crunch will continue.

It’s likely that power players will have more eyes on their actions when it comes to homelessness and housing. Opinion polls have shown that homelessness is among Californians’ top concerns, outpacing traditional worries around the economy and traffic.

In a recent University of Southern California poll, a plurality of likely voters in California mentioned homelessness and housing as their top concern, ahead of climate change and immigration, according to a USC news release. In a Mercury News poll conducted with the Silicon Valley Leadership Group, 89 percent of respondents said homelessness was an extremely or very serious problem, up 10 percentage points from a year earlier.

In fact, in a sign of how concerned communities are about homelessness, the Mercury News recently decided to dedicate one reporter, Marisa Kendall, to the issue full-time. 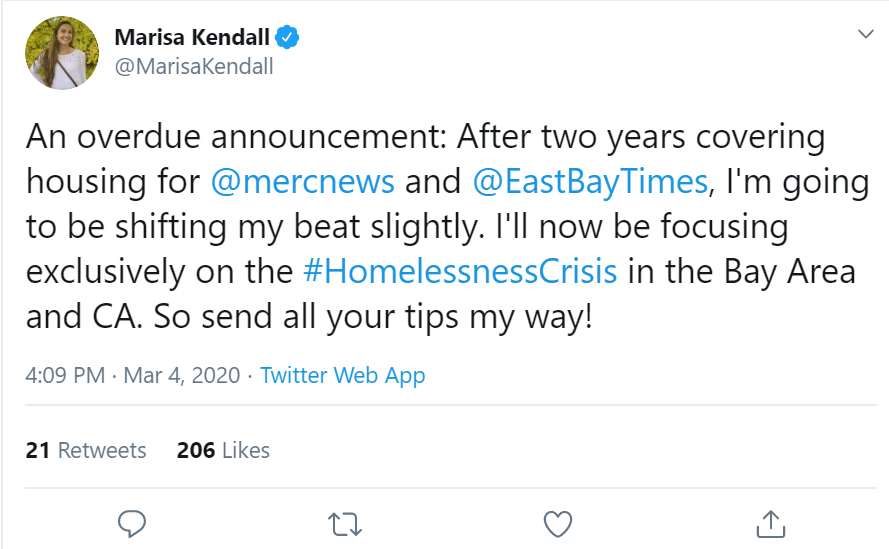 The significance of the move can hardly be overstated. The Mercury editorial staff, like those at many newspapers, has been more than decimated in recent years. The newspaper has shed dozens of specialty beats and so to add a new one is a loud statement.

And the news organization has taken the mission seriously, regularly running in-depth stories about the housing crisis and homelessness, including the story that accompanied the poll with the Silicon Valley Leadership Group.

Besides showing great concern about homelessness, the poll indicated that while Silicon Valley residents are anxious to help alleviate the problem, they are less enthusiastic when the solutions include providing homeless shelters and housing in their own neighborhoods.

Only 33 percent of respondents believed homeless citizens should be allowed to camp in public places like parks, the Mercury said, and a majority of those polled said they were against allowing the homeless to live in RVs along roadways or in parking lots.

Hardly good news for the RV residents along Continental Circle in Mountain View—or any of the thousands of other homeless residents of one of the nation’s wealthiest regions.

Mike is lead storyteller at Signifyd, a Silicon Valley commerce protection company. He’s a former journalist who covered the distinctive culture of Silicon Valley for The Mercury News of San Jose.