The First 50 Years of Living Online: ARPANET and Internet 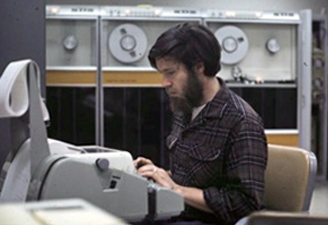 Today, we live a good portion of our waking hours online. Nearly every form of communication, every medium, every transaction, every kind of information has been brought into a single kind of system. Not since our distant ancestors learned to talk has there been as big a change in the minute by minute process of primate communication.

And there's no end in sight. The net is creating new gatekeepers, new centers of gravity and power. Society is building the long-term institutions that will determine who can access information, and add to it—and profit from its sale.

The net itself will draw even closer. Augmented Reality and Virtual Reality have been mature in vertical markets for decades. They're still just searching for the killer app to reach the rest of us, and pull us even deeper into the online world. If the startups working on brain-computer interfaces have their way, the net may someday pierce the final veil—the wet, bony one surrounding the very seat of our thoughts. Whether through implanted electrodes or gentler non-invasive scanning, we could end up literally sharing those thoughts online. Or posting the soundtracks in our heads, or being monitored for (literal) thought crimes.

Today nearly everyone alive is a user of general purpose computer networks: four billion on the Internet, plus another two billion on mobile cell phone networks. 50 years ago this coming Tuesday, there were zero users. And then there were two.

On the evening of October 29, 1969, two young programmers sat at computer terminals 350 miles apart: Charley Kline at UCLA and Bill Duvall at the Stanford Research Institute (SRI) in Northern California. Kline was trying to login to Duvall’s computer. “The first thing I typed was an L,” Kline says. Over the phone, Duvall told Kline he had gotten it. “I typed the O, and he got the O.” Then Kline typed the G. “And he had a bug and it crashed.” And that was it. The first message between hosts on the new network was “lo.” The bug was quickly fixed, and the connection fully up before they went home.

Thus began one of the first big trials of a then-radical idea: Networking different kinds of computers together. The project was called ARPANET—an experimental network built by the US ARPA (Advanced Research Projects Agency). It was designed to connect islands.

By the 1960s multiple users could have accounts on a single big computer using terminals, and share messages and files. Such timesharing systems were already being used to prototype many of the features of modern computing. These ranged from virtual reality and graphics at the University of Utah to the Web-like oNLine System (NLS) at SRI, as well as cloud-like computing power for rent with Tymshare and Compu-Serve and thriving educational communities at MIT, Dartmouth, and the University of Illinois. Many had been partly funded by ARPA. Timesharing got users accustomed to being “online” together over phone lines.

But each of those timesharing systems was a little island, an isolated community restricted to its own host computer. By reliably connecting those different kinds of host computers, several networking efforts in the US and Europe hoped to connect those islands to each other into archipelagos, and one day an entire online world.

General computer networking may have been born in 1969, but it had a long gestation. The first special-purpose networks between similar machines had been pioneered in the late 1950s by the SAGE air defense system. SAGE inspired similar systems by the Soviets (and even bigger dreams of a USSR-wide public network that could also run the planned economy). But such dedicated systems required purpose-built machines and World War III–size budgets.

By the early 1960s J.C.R. Licklider, the visionary first leader of ARPA's computing division, was funding early timesharing and other computers at a number of research sites around the US He proposed a future “Intergalactic Computer Network” as a way to increase efficiency. Instead of duplicating functions between sites, each could focus on what it did best and log in remotely over the network for whatever other software or functions it needed.

The main elements of packet switching—a key concept of much modern networking—were conceived by the mid-1960s and tried in small experiments shortly after. The result? By late in the decade, networking ideas were still utter heresy to mainstream computing, though a heresy that was slowly winning acceptance in the rarefied atmosphere of key labs.

That's not to say it was mainstream, or easy. Even timesharing was a newish thing, and connecting timesharing computers to each other was on the reddest bleeding edge. “Nineteen-sixties computers were not interconnected and most were not even interactive; people gave them jobs to process and came back later for the results,” said Bill Duvall. “Bob Taylor and Larry Roberts at ARPA understood not only the potential of computer networking, but also the challenge of networking during an era when computers were generally not standardized, and did not use a common language or alphabet.” Taylor was the director of ARPA’s Information Processing Techniques Office from 1965 to 1969. He recruited networking pioneer Larry Roberts as technical architect and together they chose the people and places to build the ARPANET, assigning unique roles to three institutions.

"The development of the ARPANET, which had no commercial application at the time, underscores the power of coordinated basic research and the importance of that research to our society. In the 1960s, computers were not interconnected and most were not even interactive. A few research groups were looking at the potential of networked computing and how distributed systems might be used as information repositories and collaboration tools, but they were hampered by a huge obstacle: they lacked a network to weave their projects together."

Cambridge-based BBN (then Bolt Beranak and Newman) built the special Interface Message Processors (IMPs) that connected the main computers to the net. BBN served as the system’s administrator. The original IMP pictured is in the Museum’s collection.

Doug Engelbart's group at SRI ran the Network Information Center (NIC), which besides acting as a central library kept track of all the computers on the ARPANET. This would later evolve into the Domain Name System (.com, .org, etc.). Engelbart's group had helped pioneer many core features of modern computing by then, as part of a Web-like effort called oNLine System (NLS).

UCLA hosted the Network Measurement Center, researching and improving how data moved across the network.

And that takes us to Bill and Charley's first connection in October of 1969. Within months, researchers at the National Physical Laboratory in England would turn the key on their very similar Mark I network. Within a year wireless networking would kick off with ALOHANET in Hawaii, another project funded by ARPA, and the great grandparent of everything from Wi-Fi to mobile phone data. Also within a year or so "cloud" pioneer Tymshare would start up Tymnet, which would become the leading commercial network into the 1980s.

There were several other efforts, too. Networking would have happened with or without ARPA. But the sheer scale of the ARPANET and related projects like ALOHAnet, fueled by ARPA’s hefty budget, soon catapulted networking to a whole new level: From a topic for obscure papers to a continent-spanning reality with hundreds of actual users.

ARPANET's success galvanized other networking efforts, and began an incredibly rich period of development at every layer, from the wires and radio waves that carry raw data, to networking protocols that safely move it where it needs to go, to web-like user applications. At the network level the ARPANET and its relatives spawned innovations like Ethernet and other local networks, further wireless networks like ARPA's Packet Radio Network and Satellite Network, and systems for connecting different networks to each other—a process known as internetting. ARPA’s own way of doing this eventually beat out leading corporate and international competition to become “the” internet the web runs over today.

SRI’s Packet Radio research van hosted watershed internet experiments in 1976 and 1977 and is part of the Museum’s collection. As with the personal computer, the main user features of the connected world we know today were prototyped in a mad rush by the mid 1970s: Email and clickable links; shared documents and files; wireless data; virtual worlds; even Skype-like packet voice. They just took a few decades to reach the rest of us. 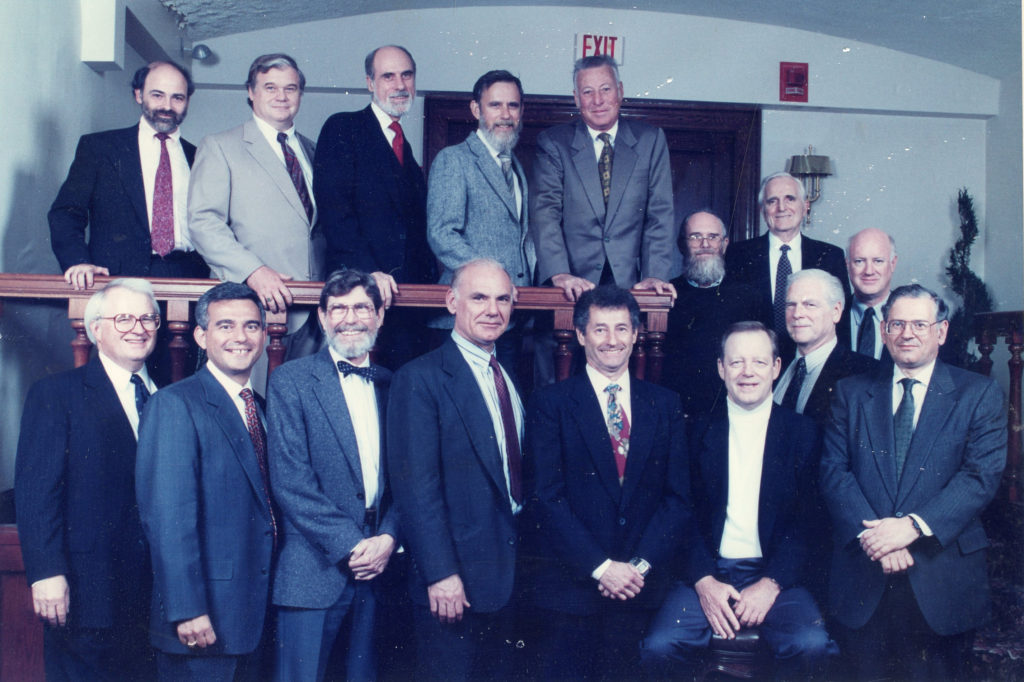 In 1994 Bolt Beranek and Newman Inc. (BBN), which had developed the hardware for the original ARPANET and run the central Network Operations Center, had a new CEO, George Conrades. He was a veteran IBM marketing executive. By this time BBN had also developed a quite significant Internet business, and Conrades felt that the way to grow BBN quickly was to expand on that Internet business. As a way to make a splash as a significant Internet company, Conrades decided that BBN should host a 25th ARPANET celebration and invite as many ARPANET/internet pioneers as possible.

The celebration was held at Boston’s Copley Plaza hotel on September 10, 1994, and was titled “The History of the Future—ARPANET, Internet, and Beyond: A Celebration of 25 Years of Innovation in Network Communications.” A video tape was made of the approximately one-hour presentation period, below. Other activities related to this celebration were a presentation by Doug Engelbart at BBN and a couple of photo sessions and handouts. In the year after the celebration, Katie Hafner and Matthew Lyons book on the history of the ARPANET, Where Wizards Stay Up Late, was published.

Besides the 50th anniversary of the ARPANET, 2019 is a year of many web and networking anniversaries, or “netiversaries” to coin an awful word. It has been 30 years since the first proposal for the World Wide Web, and 25 years since the popular explosion and the rise of web commerce, including the launch of Netscape, Amazon, Yahoo!, and many others. It has also been 25 since the so-called “Woodstock of the Web,” the vastly oversubscribed first web conference in 1994. The series is still going strong, with the most recent this past May in San Francisco.

Twenty years ago Japan rolled out the mobile web the rest of us wouldn’t discover until the iPhone era (i-Mode), while here we remember 1999 for Napster as well as the teetering height of the dot-com boom. Lastly, 2019 marks 15 years since the web’s popular rehabilitation following the dot-com crash, including Google’s IPO and the rise of “Web 2.0” sites like Yelp, Flickr, and a social network called Facebook.

Ten years ago marks the start of yet another try at a digital cryptocurrency in the mold of the pioneering 1989 DigiCash Inc. The upstart was called Bitcoin.