Across the United States, countless Americans have celebrated and honored LGBTQ+ Pride Month this year, 2022. They have paraded, cheered, and reflected in solidarity with their families, friends, and strangers alike. These observations have taken place against an outrageous, hateful, and ultimately failed attempt by right-wing bigots to mar and disrupt Pride. Political and religious figures on the Right have made horrifying, immoral calls for violence and discrimination against the LGBTQ+ community. In Idaho, a group of over thirty violent white nationalists were arrested on route to a Pride event. In state legislatures across the nation, over two hundred and thirty bills have been introduced, aiming to strip the human and civil rights of LGBTQ+ people, particularly transgender people. Indeed, transgender people have been particularly attacked by the Right. This attack is not unique to the American Right. It is a project of the Right internationally.

For centuries, transgender people have had the courage and resilience to live their lives in the face of bigotry and violence. Many of them have been exemplars of what Martin Luther King, Jr. meant in 1959 when he exhorted us to “Make a career of humanity. Commit yourself to the noble struggle for equal rights. You will make a better person of yourself, a greater nation of your country, and a finer world to live in.” For many transgender people, their career of humanity has been in creating community, defining and sustaining spaces in which transgender people can find one another, share experiences and knowledge, and learn from each other. One of these transgender people is 2014 CHM Fellow Professor Lynn Conway. 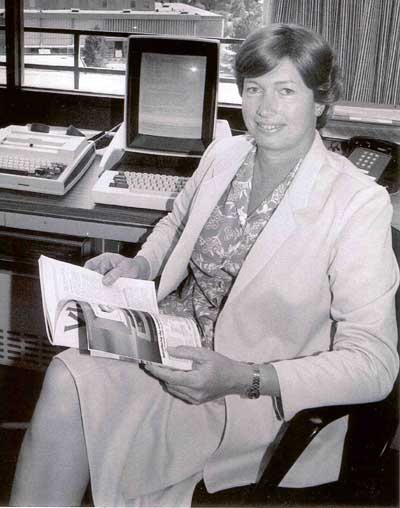 CHM honored Conway for “her work in developing and disseminating new methods of integrated circuit design.” While working at Xerox PARC in the 1970s, she created innovative new methods for designing the next generation of incredibly complex microchips. Collaborating with famed Caltech electronics expert Carver Mead, Conway developed a crucial book on these methods, “Introduction to VLSI Systems.” Using this book, Conway devised and taught a new university course and then created innovative techniques for widely teaching these new methods, fundamentally changing how a new generation and community of designers created microchips—the building blocks of our digital world. Not only an innovator, Conway was also a teacher and community builder. 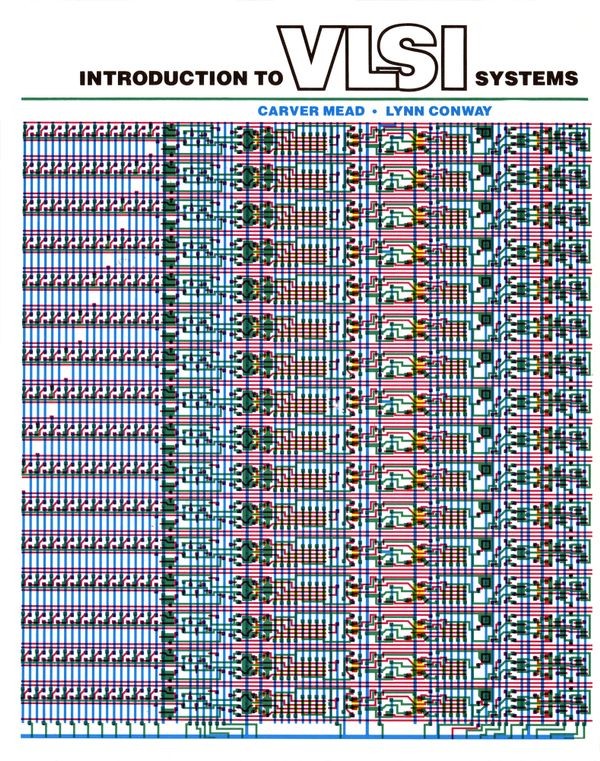 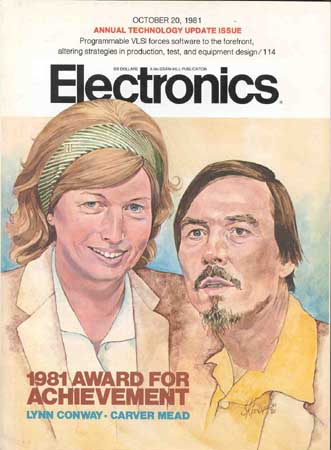 Conway’s success with her new approaches in design and teaching in collaboration with Carver Mead were quickly and widely recognized. Source: https://ai.eecs.umich.edu/people/conway/Awards/Electronics/ElectAchiev.html

Conway went from success to success, leading major programs at DARPA in the 1980s, then becoming a professor of electrical engineering and computer science at the University of Michigan, where she also served as an associate dean of engineering. In 2000, she began to use her personal website at the University of Michigan for a new dimension of teaching and community building. Conway began to share her story of gender transition and her experiences as a transgender person publicly for the first time.

Over the coming years, Conway made her website into a space for community building, information exchange, and activism. She and other transgender people shared both their stories and knowledge they had gathered on the site. Conway used the growing prominence of her site for her activism, particularly to protect and support transgender and other LGBTQ+ youth. 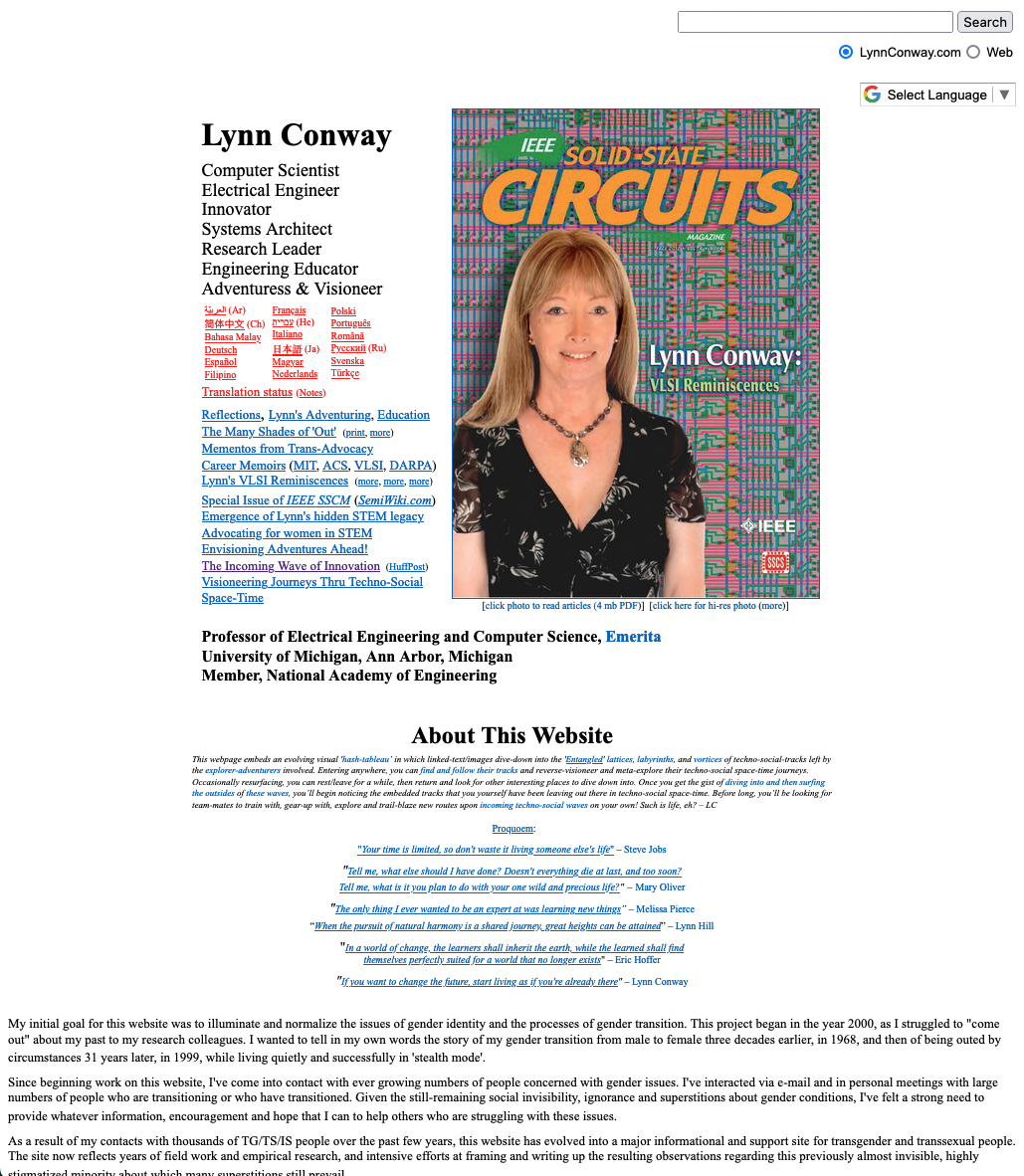 Conway’s use of her website as a space for teaching, sharing, and community building is part of a broader story and history of LGBTQ+ people using the online world for these activities. Washington State University professor Avery Dame-Smith is one of the leading researchers documenting and preserving this history through his Queer Digital History Project. His project is collecting oral histories, cataloging pre-2010 LGBTQ+ online communities, and archiving documents and newsgroups. 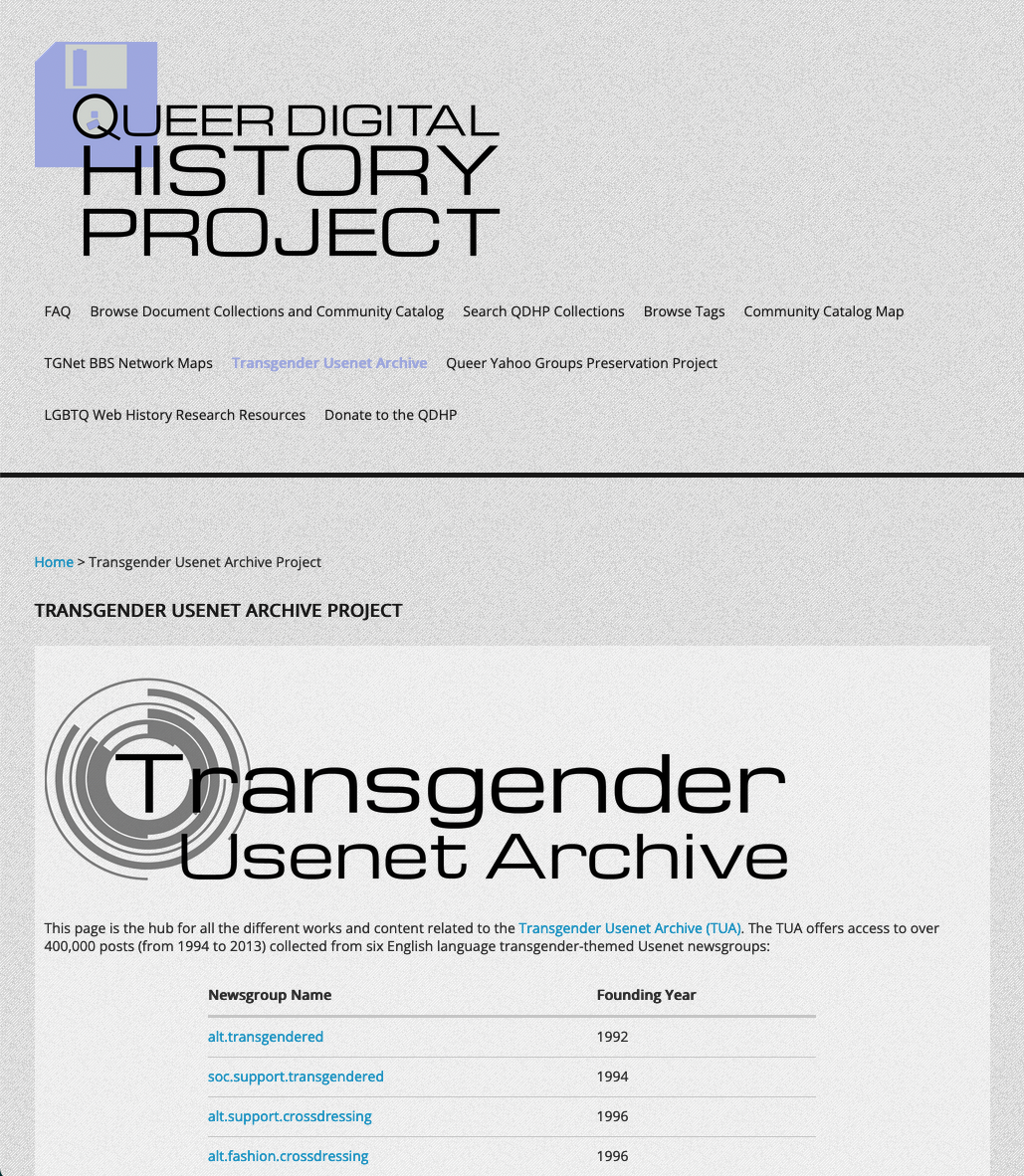 Amid strife and hardship, it is so hopeful to recall these stories of brave people who are using the online world to “make a career of humanity” in such powerful ways.