The Amiga computer celebrated its 30th birthday at the Computer History Museum in Mountain View, California July 25-26, 2015. For a dedicated group of users, its technical achievements were fondly remembered and recognized. Launched at the Lincoln Center in New York in 1985, the Amiga 1000 was the first affordable multitasking computer to enter the PC market. Commodore owned the rights to the Amiga until they went bankrupt in 1994. Its release changed the face of creative computing forever – even if it is now considered a footnote in computing history. 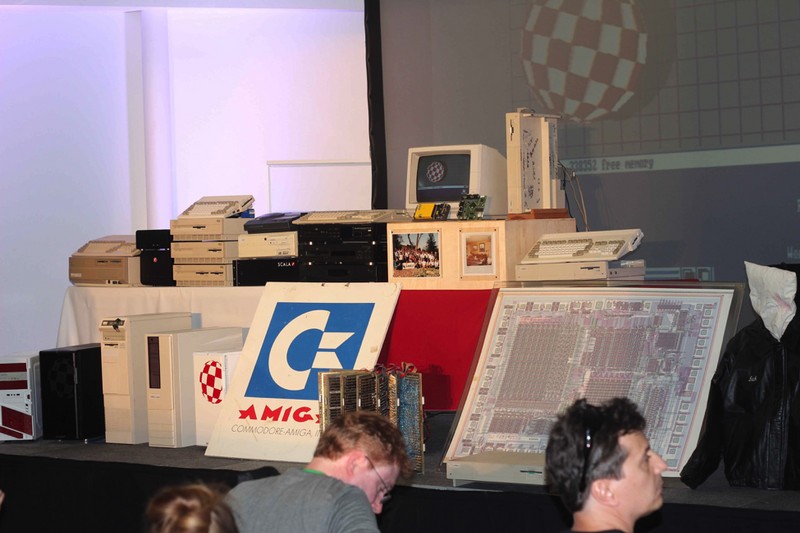 Amiga technologies – old and new – came together at Amiga 30 USA.

Amiga technologies were engineered to be accessible to anyone. Business machines like the Amiga 2000, for example, opened up video production to a wider user base in the North American region. The Amiga had been designed to work with NTSC video signals. From the Amiga 2000 onwards, video editors and computer graphic artists were presented with a comprehensive and affordable way to generate high quality video content. This was especially the case when video toasters from NewTek were included in the mix.

The Amiga 500 also made an impact in home consumer markets. It became a video gaming powerhouse in Europe, which helped make it the biggest selling Amiga of all time. Independent game designers in places like Britain recognized the power of affordable Amigas. The Amiga 1200 – the technological successor to the Amiga 500 – was even used by Calvin Harris to record his first album I Created Disco. That was in 2007. The software used was called Octamed.

Zach Weddington was the first filmmaker to see the potential for the Amiga story to be turned into a documentary. The inspiration for Viva Amiga came from a visit to the Vintage Computer Festival East in the US. A successful Kickstarter campaign soon followed in 2011.

Viva Amiga got its first showing at the banquet of Amiga 30, held at the Computer History Museum in Mountain View, California, July 25th-26th.

The documentary was an impressive achievement. Amiga technologies were very much downplayed in the North American region when they were in the general consumer market. Then, when Commodore went bankrupt, continued development in Europe became fragmented. For a filmmaker to capture the essence of such a story is never an easy thing to do. Weddington, however, pulled it off.

His film shed new light on parts of Amiga history that had not been completely told before. For example, the role of Dave Morse was now equal to that of Jay Miner. Morse was the businessman in the Amiga story. He had, upto Amiga 30 at the Computer History Museum, been somewhat overshadowed by Jay’s technical contributions. Dave Needle delivers one line in Viva Amiga that puts Morse immediately alongside Miner: “He was the best man I have ever known.” 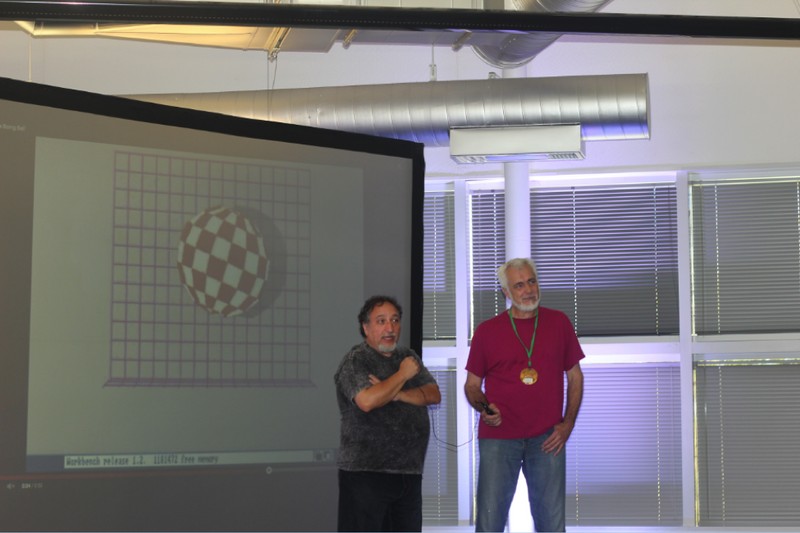 Dave Needle and RJ Mical represent both the hardware and software side of what became the Amiga 1000 in Viva Amiga.

RJ Mical’s description of the launch of the Amiga 1000 also introduced an unintentional yet organic subnarrative to the film. Mical put the personal computing market of the mid 1980s into context. He painted a picture where companies like Apple, Atari, Commodore, IBM and Microsoft all competed to be industry leader in what was an emerging PC market. The Amiga was technicolor in a monochrome world.

Despite instances in the film where Commodore was described as a parent company without clear direction, it was hard not to return to the point raised by Mical. It made sense to consider the outside forces that may have kept the Amiga at bay in the North American region. This was especially the case when systems like the Amiga 500 achieved much success in Europe. Both Bill Hart and Colin Proudfoot shed more light on these aspects of the Amiga’s past in the banquet warm up presentations. 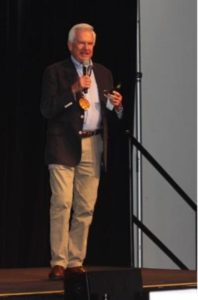 Bill Hart was a close friend of Dave Morse and an original investor in Amiga Corp. Like Joe Decuir and Ron Nicholson, he brought new pieces of information with him to Amiga 30 USA.

Bill Hart, an original investor in Amiga Corp., was one of several attendees to present new information at the banquet where Viva Amiga was shown. Bill confirmed that Steve Jobs took an interest in what became the Amiga 1000. This was to a point where Jobs visited Amiga Corp. on a scoping mission. Mical’s comments in Viva Amiga later were eerily coincidental based on this new piece of information. 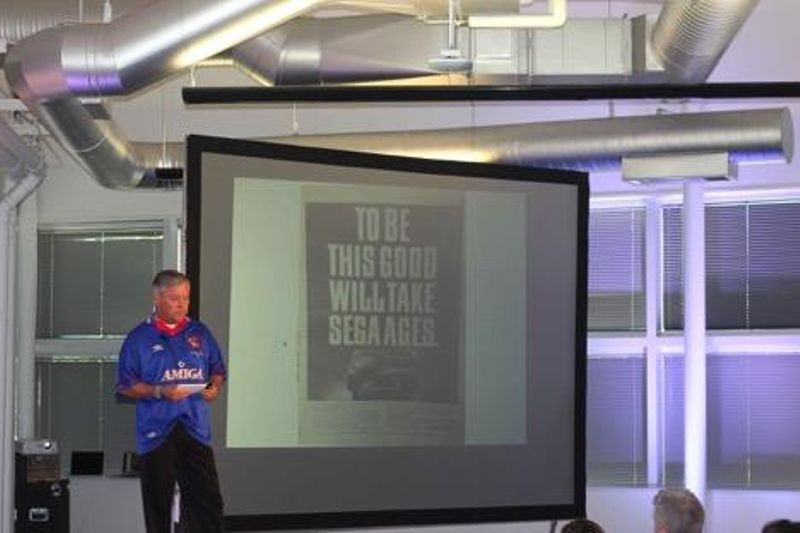 Colin Proudfoot describing how Commodore UK dealt with their main rival in the UK market.

Colin Proudfoot, former joint CEO of Commodore UK, also gave a presentation before Viva Amiga. He began by discussing Medhi Ali – former President of Commodore International. This was followed by a discussion of just how successful Amiga computers were in the UK. For example, Colin came on stage wearing a Chelsea Football Club Shirt – a Premier League team Amiga used to sponsor. He also described the time Commodore UK put a billboard advertisement for the Amiga CD32 next to Sega UK headquarters. It read: TO BE THIS GOOD WILL TAKE SEGA AGES.

From Bedrooms to Billions: The Amiga Years is another documentary currently in productions. It’s production team held interviews off site over the Amiga 30, July 25th-26th, weekend. There is also a book coming out by Brian Bagnell called Commodore: The Amiga Years.

The Amiga copyrights, trademarks and patents were acquired by other companies after Commodore went bankrupt in 1994. For a short period, they were owned by a German company called Escom and then came back to the US via Gateway 2000 in 1997. Eventually Gateway would sell the copyrights and trademarks to Bill McEwen and Amiga Inc. However, Gateway retained ownership over existing patents. The Commodore/Amiga copyrights for all works (software, manuals, videos, ads, etc.) created up to 1993 are now owned by Cloanto Corporation. They also own the “Workbench” and “Amiga Forever” trademarks, as well as a coexistence agreement with Amiga Inc. for the “Amiga” registered trademark. Hyperion Entertainment and some other companies also acquired certain rights.

During the Escom years, a PowerPC architecture and new operating system was proposed. Due to the bankruptcy of Escom, the need for a modern operating system would eventually lead to both MorphOS and AmigaOS 4. Code from AROS – an open source effort to recreate AmigaOS 3.1 – was incorporated into both. More recently, a website was created so that users of all flavors of Amigan can keep track of one another. This is called Amiga Maps. 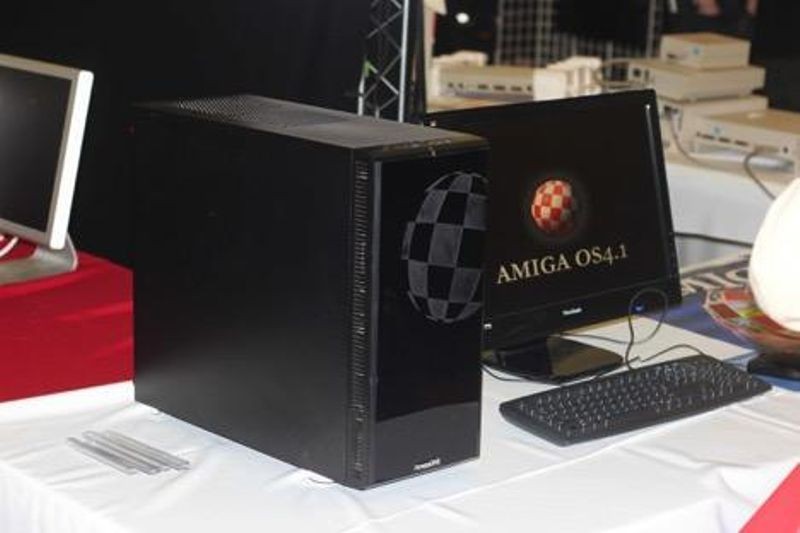 The AmigaONE X1000 was the first next- generation PowerPC to be released by A-EON Technology. It was announced to mark the 25th anniversary of the Amiga 1000 in 2010. 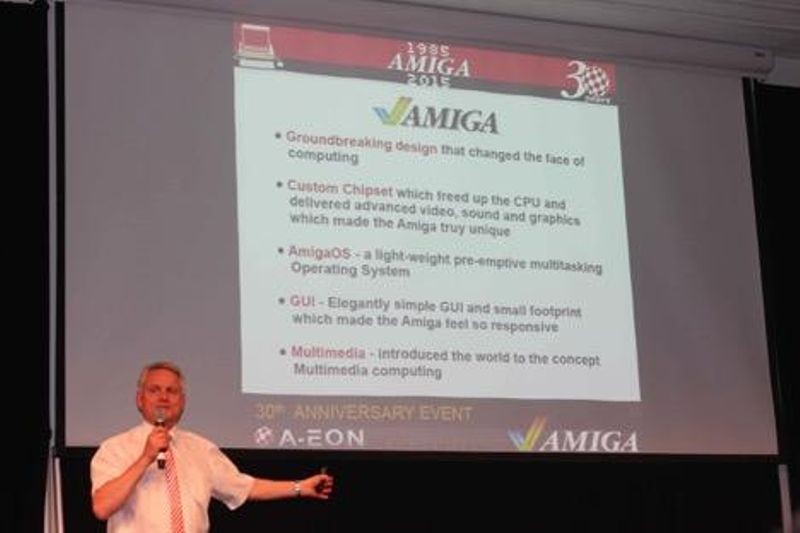 Trevor Dickinson formed A-EON Technologies to build new Amiga hardware. New systems like the AmigaOne X5000 will run AmigaOS 4, Linux and MorphOS. They are designed to cater for all flavors of Amigan.

MorphOS survives today because it was ported to PowerPC based Apple Macs. The rights to AmigaOne computers and AmigaOS 4 eventually went to Belgium based Hyperion Entertainment in 2009. That was after a lengthy legal battle with Amiga Inc. AmigaOS 4 currently runs on AmigaOne computers from Acube Systems and A-EON Technology.

Trevor Dickinson founded A-EON Technology in 2009. In addition to the X1000, there were several new AmigaOne systems planned for release by A-EON at the time Amiga 30 USA came around. There was even an Amistore already in place. Ever the passionate Amigan, Dickinson continued to keep the party going. 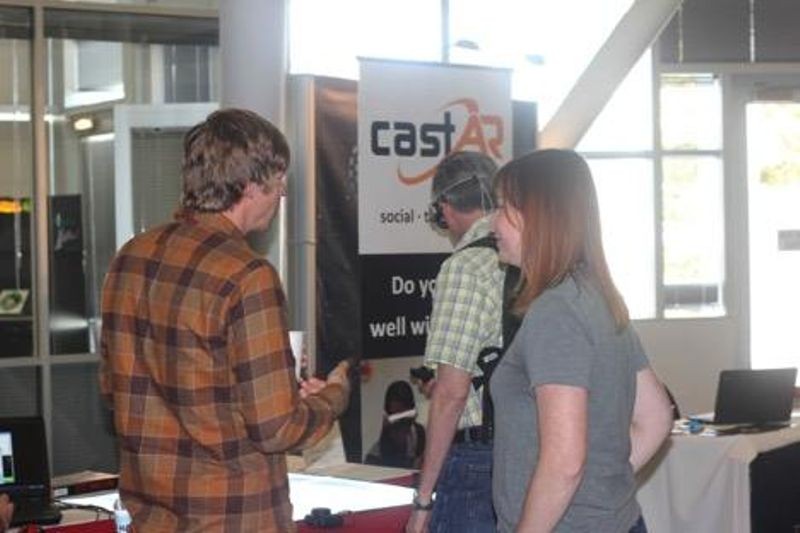 Jeri Ellsworth became well known when she recreated a Commodore 64 on a single chip and sold over 70,000 units in a day via QVC. Prior to this, she ran a number of Amiga orientated retail stores in Oregon and was held in high regard in the Amiga scene throughout the 1980s – 1990s. Ellsworth latest Silicon Valley based startup – castAR – had a strong presence at Amiga 30. Like so many others, Jeri was one of the best and the brightest drawn to the Amiga when Commodore was still in business.

The Amiga 30 committee was led by Bill Borsari (far right). It was Bill’s idea to stage an anniversary event, as well as host it at the Computer History Museum. Dale Luck and several other volunteers played a vital role in getting prototypes, breadboards and many an Amiga computer ready for show. As a whole, the volunteer team came from various different countries. These included America, Canada, Germany, Greece, Italy,Norway The Netherlands and the United Kingdom. Sacramento Amiga Computer Club proudly helped out as well.

Celebrations for Amiga computing took place throughout Europe and the US in 2015. They were gatherings that helped re-examine technologies past, as well as show off current and next generation Amiga-based systems. It was a computing legacy fundamentally about people, as both developers and users treated each other like family, a tradition the Computer History Museum is proud and honored to support.

The author would like to thank Michael Battilana for his insights on the current state of the Amiga intellectual property rights as of 2015. He would also like to thank and congratulate all of the wonderful volunteers and sponsors who made Amiga 30 such a fantastic event.

Adam P. Spring would describe himself as a renaissance man of the reality computing world. For example, he became an early adopter of 3D technologies like laser scanning via cultural heritage based applications, and has traveled the world preserving sites and artifacts. He has also written for a variety of industry, research and general publications.