Tools of the Trade: An historical look at technology and commerce

Tools of the Trade

A new display in the Computer History Museum’s Gallery area shows a sampling of objects that represent different technologies people have used over millennia to buy and sell goods. Called Tools of the Trade, the small display starts with Near Eastern clay tokens used by ancient cultures thousands of years ago to record what they bought and sold. For 7,000 years clay tokens represented commodities like sheep, wool, metal, grain and clothing. They served as legal proof of a transaction and were a vital part of trading. 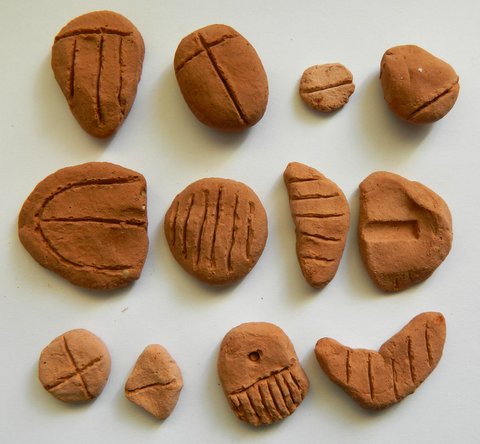 The first organized stock market, in which interests in companies or commodities could be bought and sold, was in Antwerp, Belgium in 1531.

When trading, timing is often critical. Being able to place a trade based on information only you possess can give you a tremendous advantage. One of the earliest uses of the newly invented telescope (1608) was to observe ships approaching port. Having a telescope meant being able to see how heavily laden the ship was. Knowing the name of the ship beforehand, one would know what cargo the ship was carrying. Based on how low in the water the ship was, one could make an informed guess that a small or large quantity of that commodity was about to arrive in port and place a buy or sell order hours before anyone else. 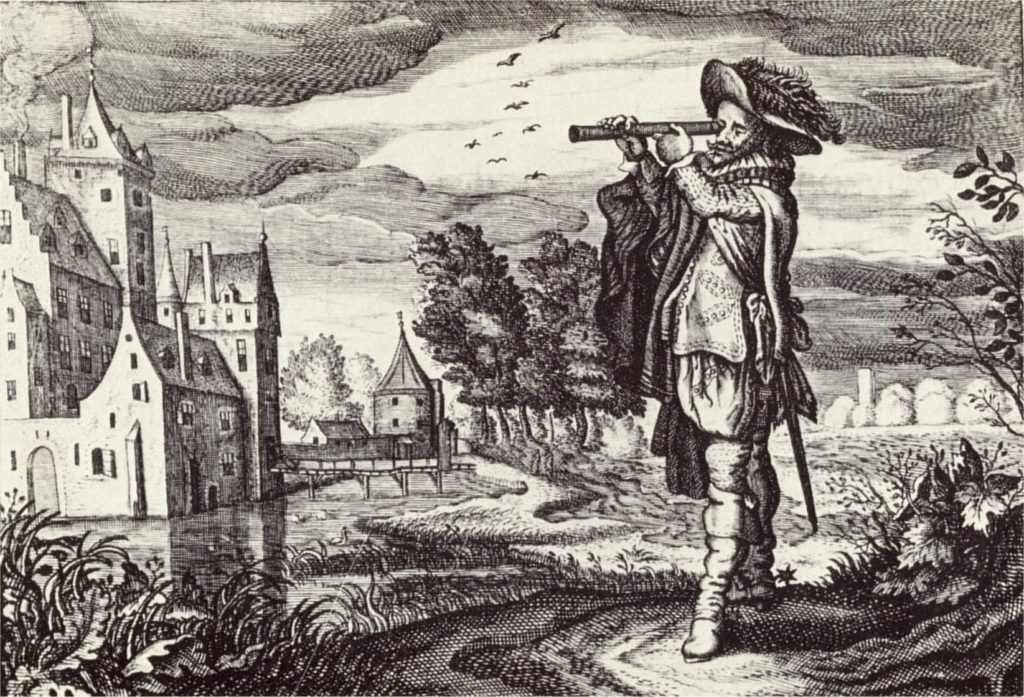 Early depiction of a ‘Dutch telescope’ from the Emblemata of zinne-werck of Johan de Brune. Middelburg, 1624.

Stock markets, of which the earliest may have been in 12th century France, were an outgrowth of small farm auctions and local fairs in which farmers met to barter or trade for goods and services. As trading networks grew in sophistication and distance, good communication between distant buyers and sellers often made the difference between profit and loss. Couriers were used to relay information on current prices in distant lands until the arrival of the telegraph in the mid-1830s. Contemporaries compared the telegraph system to a giant ‘nervous system’ connecting the globe into a Utopia in which time and distance were abolished. (Does this sound familiar?) Commerce was the most important application of the telegraph and was rapidly adopted by companies with far-flung interests. Like the seventeenth century trader using a telescope to check on approaching ships, the telegraph gave those who possessed it enormous commercial advantages.

By the middle of the nineteenth century, several inventors developed a printing telegraph in which messages were sent using alphabetic characters—not the ‘dots and dashes’ of Morse Code—and printed on strips of paper. This made communications much easier for both sender and receiver who now used typewriter-like keyboards. In 1867, Edward Calahan, an engineer at AT&T, developed a modification of this earlier printing alphabetic telegraph system specially tailored to the stock market. (The New York Stock Exchange had been founded in 1818). This gave subscribers to this service, mainly stockbrokers and traders access to recent stock price information without having to be physically present at a stock exchange. 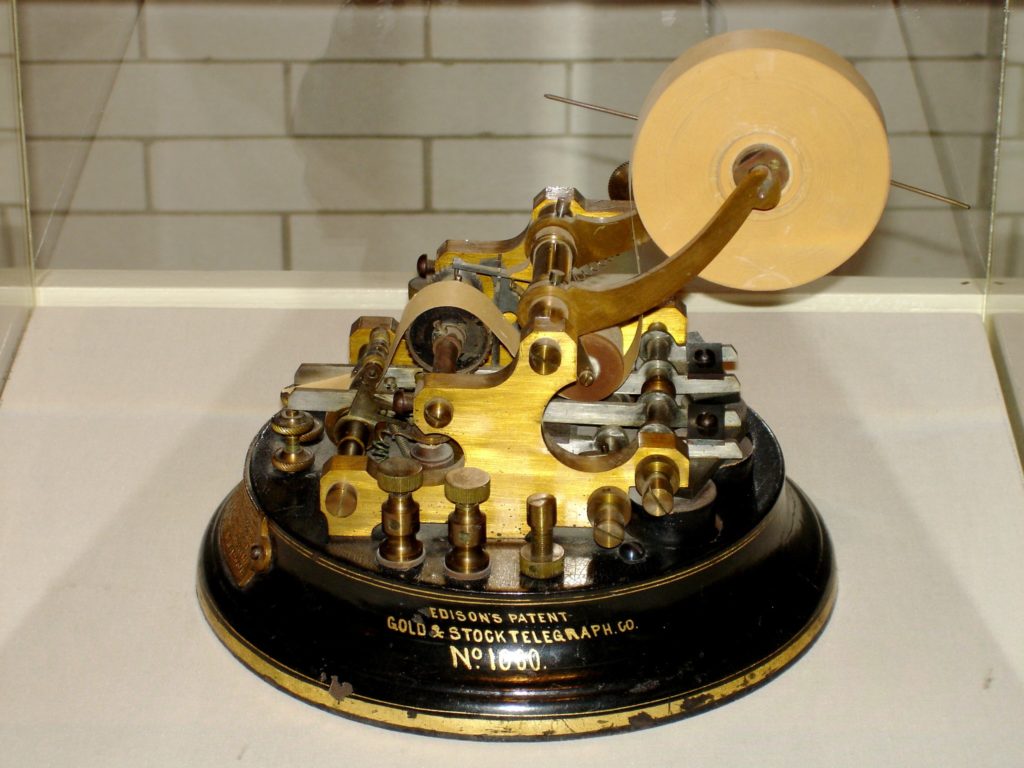 The Universal Stock Ticker developed by Thomas Edison in 1869 used alphanumeric characters with a printing speed of approximately one character per second.

Ironically, a key part of this “high-tech” telegraph communications network relied on vast numbers of poorly-paid messenger boys, some as young as 12, who were still needed for relaying specific stock prices more quickly than a stock ticker—which could be 15-20 minutes behind. Gregory Downey, whose book Telegraph Messenger Boys: Labor, Communication, and Technology, 1850-1950, notes “the paradox of a ‘lightning-fast’ information system that nevertheless seemed to rest on the speed of a lazy schoolboy.” The stock ticker was used until the early 1960s until replaced by computers and data networks. 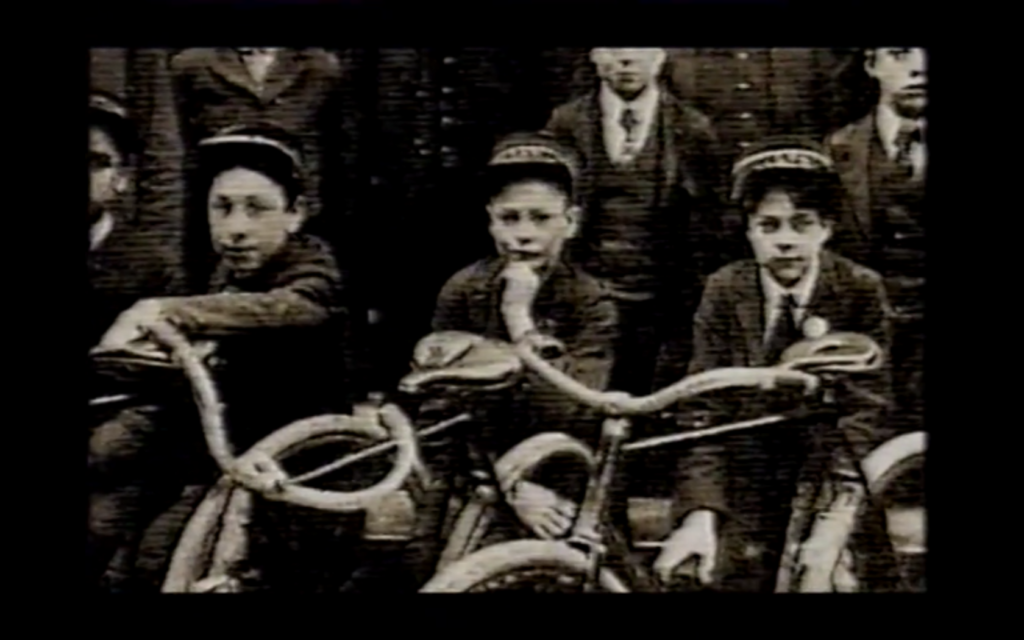 Stock pricing information within the exchange itself—displayed on a “Big Board”–was first automated in the 1920s by Teleregister, a specialty engineering company. This physically enormous display system, at first electromechanical then electronic, was the keystone of the “open outcry” system of trading whereby traders met in a single place (the exchange) and transacted business based on the common price and volume information that all participants could see on the Big Board. Before the quiet hum of computers, hundreds of frantic traders shouted as loudly as possible to each other and to ‘market makers’ on the floor of the exchange. It was a place where physical height, a loud or distinctive voice, and a high tolerance for a testosterone-laden workplace were major advantages. 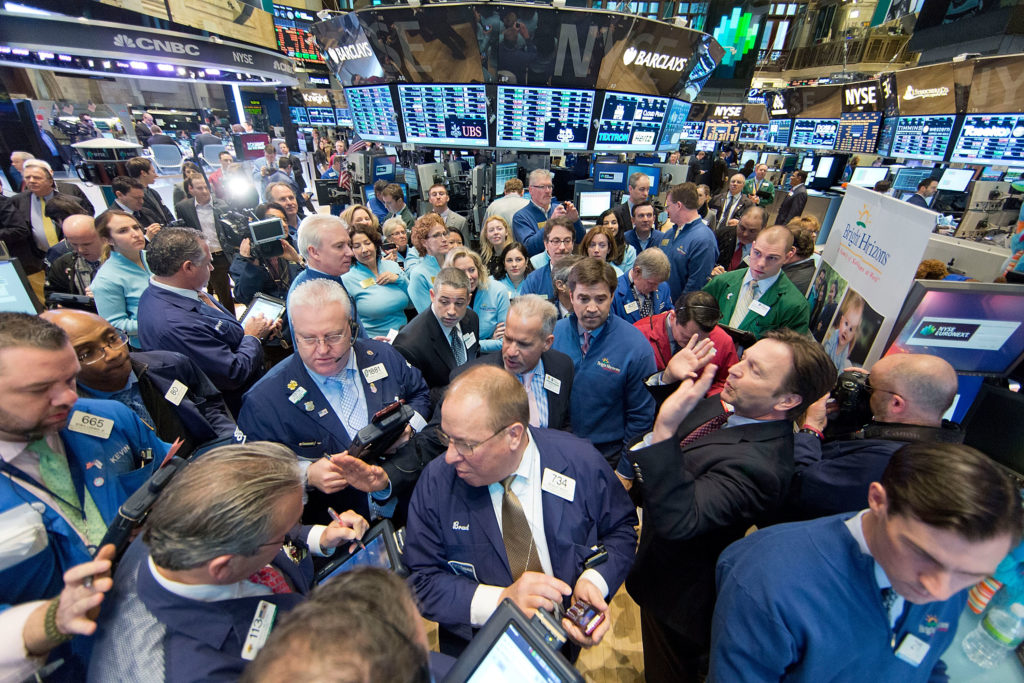 The open outcry system in action at the NYSE.

Rowdier places like the Chicago Board of Trade, which finally ended its open outcry system in February of this year, could be even more turbulent: “Shoving and fist fights broke out over price moves as small as a quarter cent per bushel of corn. Paramedics stood by for emergencies, including pencils stabbed into hands and even heart attacks.”

In the early 1960s, the two main computerized stock quote delivery systems, showing most recent price, bid/ask, trending up (‘uptick’) or down (‘downtick’) were Ultronics and Scantlin Electronics. (with a later entry by Teleregister). Scantlin and Ultronics had similar systems. For purposes of argument, let’s look at the Scantlin system. Each of the hundreds of brokers using their “Quotron II” system had on their desk a custom terminal with special function keys for rapidly requesting price and market information. The system was based in New York City and built around four Control Data CDC-160A computers using magnetic core memory for fast performance. The Quotron terminals were connected to these central computers over the AT&T telephone network using AT&T Dataphone modems. 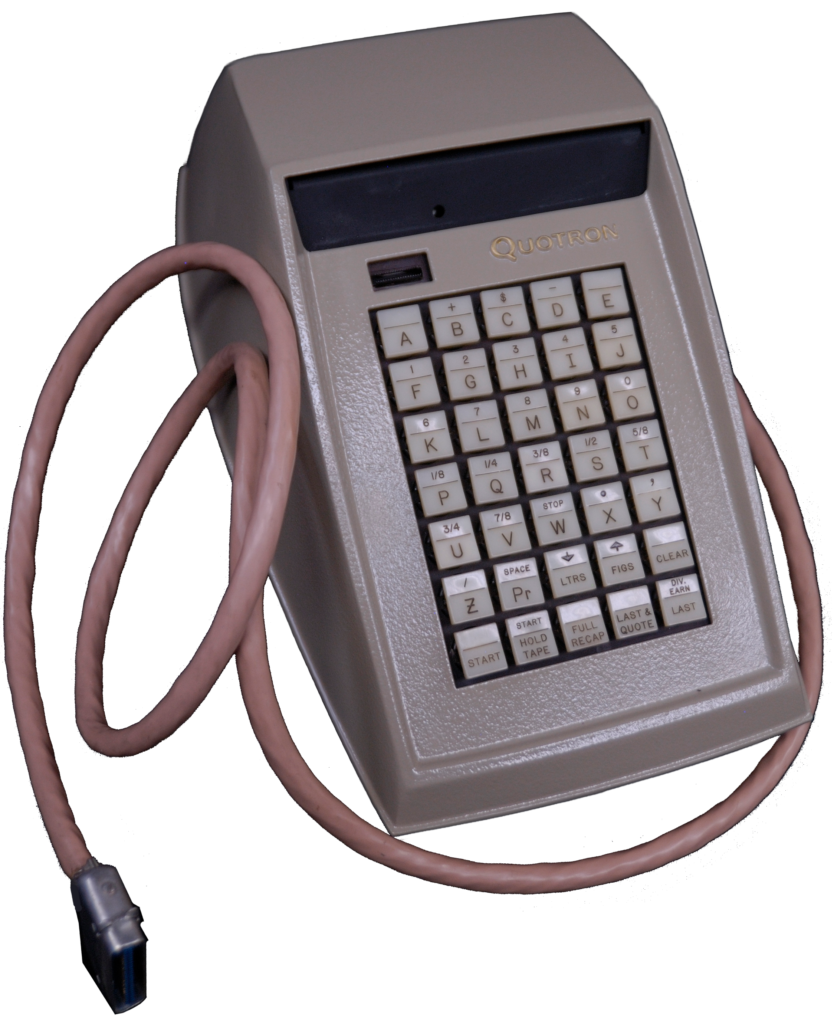 Los Angeles-based Quotron produced the first device that could show stock quotes on a screen rather than printed on tape. By 1986, more than 100,000 Quotrons were in use, a 60% market share. 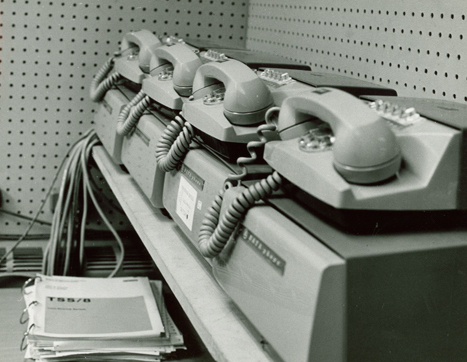 AT&T Dataphone, US, 1960. The Dataphone was used for relaying digital data across the public telephone network, connecting brokers at terminals to remote computers.

In 1983, an FCC decision to open additional FM subcarrier frequencies for digital data use was quickly seized upon by Burlingame, California company Dataspeed, Inc. which launched the QuoTrek the following year. The QuoTrek was a wireless mobile stock quotation delivery system which, during its trial period, worked in Los Angeles, Chicago, San Francisco and New York. Dataspeed predicted its impact would be as great as the ticker tape and while it did win some major contracts, it failed in the marketplace probably because brokers already had access to the same information at their desks and there was not a large enough market of private (retail) stock market investors to support it at the time. Additionally, their system required Dataspeed to approach FM radio station managers and obtain access to that station’s transmitters for them to install their QuoTrek transmission equipment—hardly popular with radio stations.

It was an enticing vision of real-time information access and QuoTrek’s designers even envisaged adding email to the device. The QuoTrek was a good idea that fell on barren soil… however the vision of mobile access to real-time stock market information was ultimately realized three decades later. 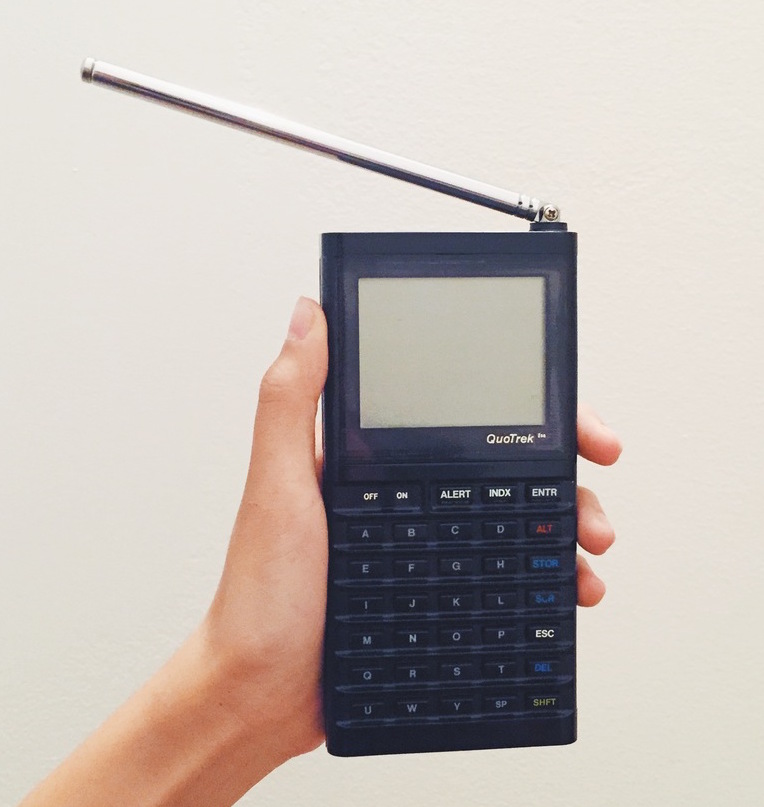 For professional traders today, special-purpose terminals connected to private networks, like those from Bloomberg, Reuters and others, bring an immense amount of specialized financial information to a broker’s desk and now, to their mobile devices as well. The Bloomberg terminal is a common feature in US and Asian financial institutions whereas the Reuters terminal is more popular in Europe, the Middle East and Africa.

The Bloomberg terminal in particular is more than a passive recording and display system—its users and the information it provides them are used by key decision makers at the most important financial institutions in the world. The most popular feature—among hundreds—of the Bloomberg terminal? Chat. Being able to chat directly with key market makers or influencers over the private Bloomberg network is how trillions of dollars of wealth are managed on a daily basis. 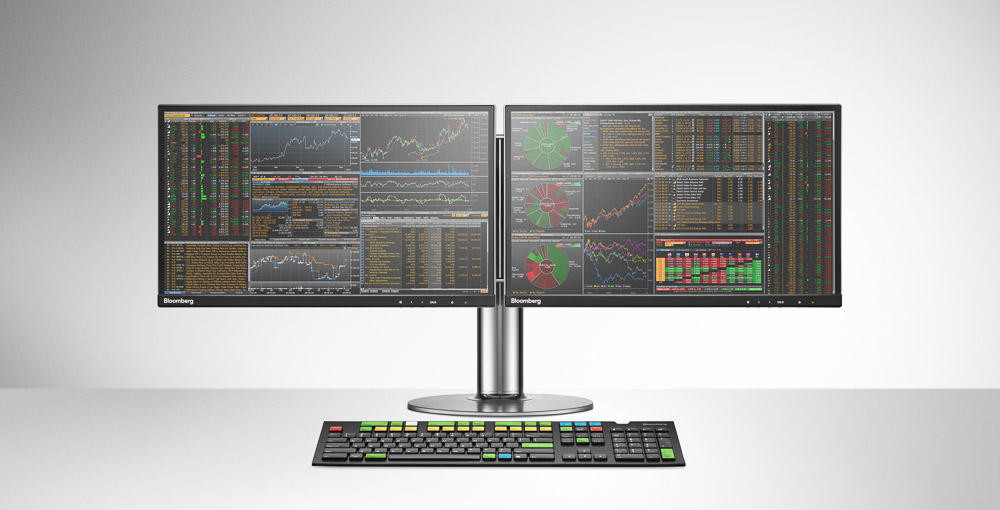 Bloomberg terminal, 2015. Most professional traders use a Bloomberg or competing system for real-time market data and financial information, as well as for executing trades.

When a brief outage took down the Bloomberg network on April 17 of this year, for example, the UK government had to postpone its debt auction since without the chat feature and financial data from their Bloomberg terminals traders didn’t have the means to judge the market.

Over the long history of trading, the quest to improve market knowledge is the one constant factor. While the makers of the clay tokens may have used folkloric methods to gauge the growing season (and thus eventual prices), today financial decisions are made with the same goal in mind but using tools that let us bring in dozens of data sources and nearly real-time price information. Trading truly is a basic human activity that has been with us since the dawn of recorded time and which will continue, with even greater energy, in our computerized age.