We should tell Shockley what we did today

While driving home from Bell Telephone Laboratories Murray Hill facility in New Jersey during a "Miracle Month" of intense activity culminating in their demonstration of the first transistor, Walter Brattain told his carpool colleagues, "Bardeen and I produced an amplifier using the field effects at very low frequencies . . . But the next night, I swore them all to secrecy. They weren't supposed to know anything about this." [1] 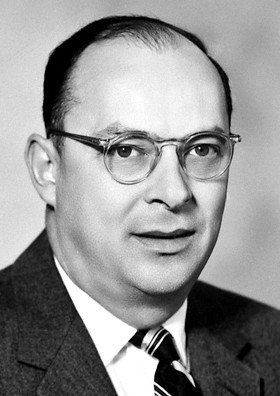 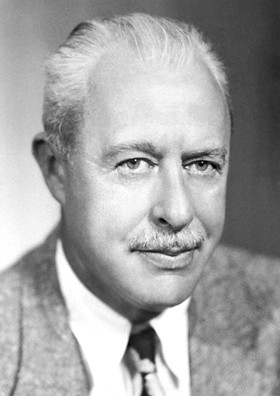 Walter Houser Brattain (1902–1987) was born to American parents in Amoy (now Xiamen) China. On their return to the US, the family settled on a ranch near Tonasket, Washington. He received a master's degree from the University of Oregon and a PhD from the University of Minnesota. Brattain joined Bell as a research physicist in 1929, where he was noted as a skilled experimentalist.

Born in Madison, Wisconsin, theoretical physicist John Bardeen (1908–1991) skipped three grades in school as a child prodigy. He earned a master's degree from the University of Wisconsin and a PhD from Princeton, where he pursued an interest in solid-state physics.

Under the secret code name 'The Surface State Job," their project was an important priority within Bell Labs, the research arm of the American Telephone and Telegraph Company, to find a smaller and lower power replacement for bulky, power-hungry vacuum tubes in telephone switching systems. Mervin J. Kelly, the Labs' research director, believed that crystalline semiconductor materials, such as germanium or silicon, might offer a solution. In 1936 he recruited William Shockley from the Massachusetts Institute of Technology (MIT) to research solid-state materials for this application.

Born in London, England, to American parents, William Bradford Shockley spent his youth in Palo Alto, California, just yards from the famed Hewlett-Packard garage. A precocious child, he was "ill-tempered, spoiled, almost uncontrollable, who made his doting parents' lives miserable." [2] He earned a bachelor's degree at the California Institute of Technology and a PhD in theoretical physics from MIT. Brilliant, Intel's Gordon Moore commented that Shockley "could see electrons," but egotistical and volatile, he enjoyed management's support but was less popular with his peers. [3] "He understood everything but people," according to Nobel Laureate Charles Townes. [4]

Convinced he could find a solution based on solid materials, in 1939, Shockley wrote, "It has today occurred to me that an amplifier using semiconductors rather than vacuum is in principle possible." Brattain assisted Shockley with experiments on his idea for what we would call today a field-effect transistor (FET) but achieved no useful result.

World War II disrupted this work, but it resumed in 1945 when Shockley hired John Bardeen and asked him to see if he could find anything wrong with his design. Bardeen initially concluded that it should have worked.

The FET is a device that uses an electric field to control the flow of current in a semiconducting material. Shockley had published a paper in his MIT days that assumed that electrons near the surface would be as free to move about as those in the bulk of the material. On March 19, 1946, Bardeen determined theoretically that they were not. He concluded that electrons in that region must be trapped, thus creating a surface state that formed a barrier to movement.

Bardeen and Brattain, aided by physicist Gerald Pearson and chemist Robert Gibney, devoted themselves to figuring out if he was correct. By early 1947, in a laboratory experiment, they demonstrated the presence of the barrier. As their manager, Shockley offered suggestions on how to breach the barrier but was not involved in their work on a day-to-day basis.

On Monday, November 17, Gibney suggested that Brattain apply a voltage between a metal plate on the upper surface and a contact on the rear of a slab of germanium crystal to create a strong electric field perpendicular to the surface. A drop of liquid electrolyte at the point where electrical contacts touched the material neutralized the surface state and produced a measurable field effect in the structure.

Following Bardeen's suggestion to probe the surface with a sharp metal point surrounded with the electrolyte, on November 21 Brattain produced a functioning amplifier, albeit only at very low frequencies. A couple of weeks of long hours and feverish activity on blackboards and lab benches, during what Shockley called "The Magic Month," combined fortuitous "accidents" in processing the material with smart intuitive sense in taking advantage of what they learned, yielded amplification without the presence of the electrolyte.

Bardeen calculated that reducing the distance between the two contacts would enhance the effect. Brattain came up with an ingenious approach that involved cementing gold foil onto a plastic wedge and with surgical precision slicing the tip with a razor blade to create two contact points separated by the width of a sheet of paper.

On the afternoon of Tuesday, December 16, 1947, they attached a spring to press the crude contraption firmly against the germanium surface. Brattain found that if he wiggled it just right, "I had an amplifier with the order of magnitude of 100 amplification, clear up to the audio range." [5] The solid-state semiconductor amplifier was born.

He and Brattain agreed: "We should tell Shockley what we did today." [1] 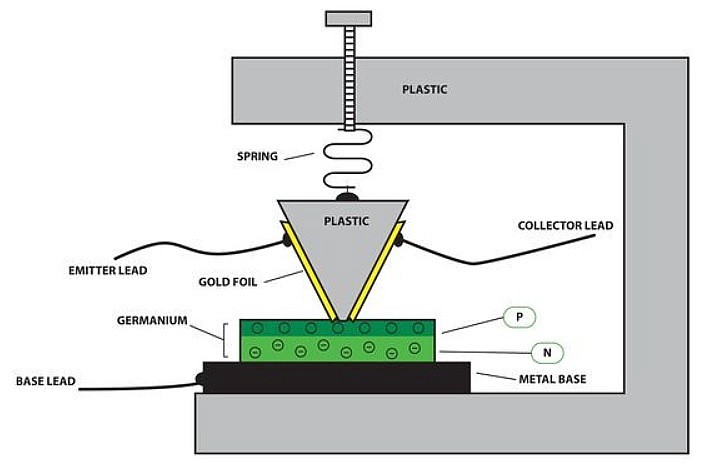 Bardeen seldom discussed his work at home; however, that night, he remarked casually to his wife who was peeling carrots in the kitchen, "We discovered something today." "That's great," she responded automatically. Sometime later, Jane found out that the something was the transistor. [6]

Shockley admitted that their news "provoked conflicting emotions in me. My elation with the group's success was balanced by the frustration of not being one of the inventors." [7] But, realizing the importance of their breakthrough, he arranged a demonstration of the amplifier for Bell executives on Tuesday afternoon, December 23, 1947. 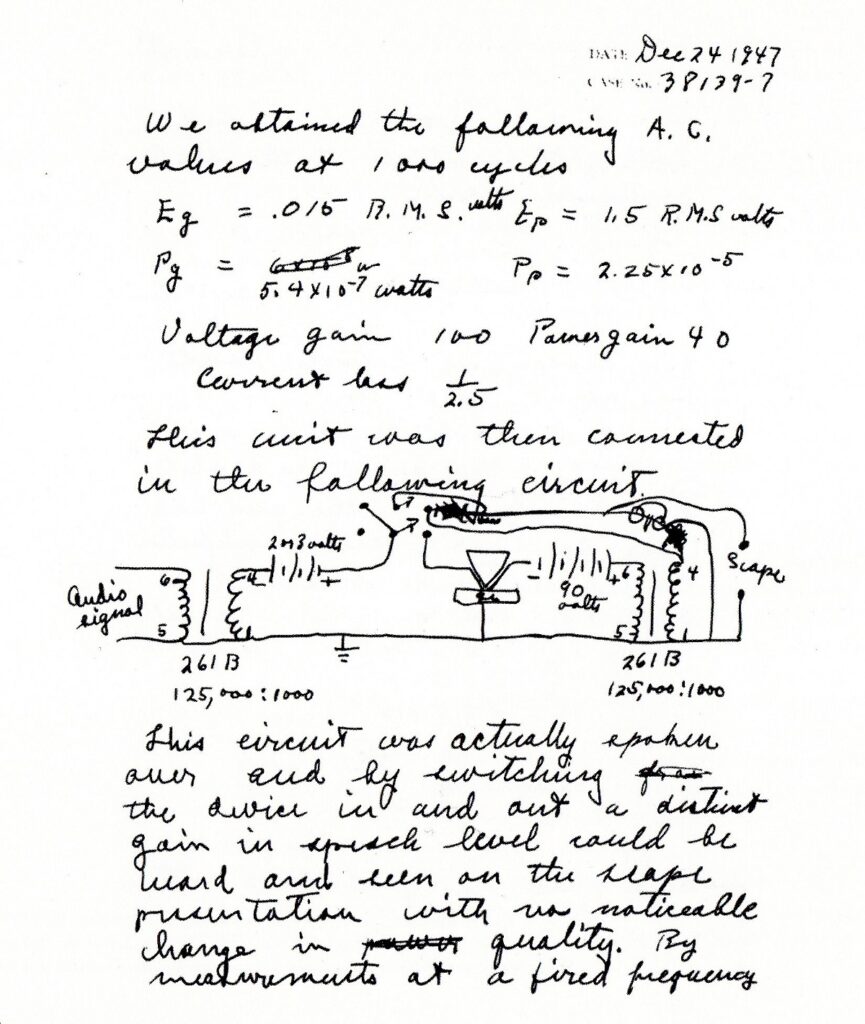 Brattain recorded in his notebook that with a microphone and headphones, "This circuit was actually spoken over and . . . could be heard and seen on the scope presentation." Sadly no one remembers what was said, just that it worked. Shockley called it a "magnificent Christmas present."

Within days after Christmas, Bell Labs' patent attorneys began to document their work and prepare for a public announcement. As Shockley's ego-driven, self-promotional activities made him the most visible spokesman for Bell Labs, orders came down the line that no pictures be taken of Bardeen and Brattain without his presence. Publicity photos at the time show him front and center of the scene. 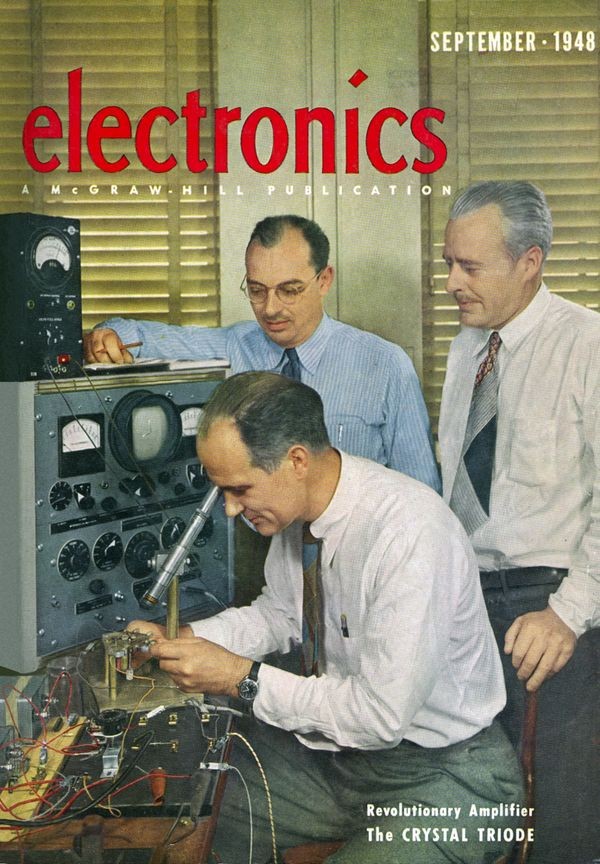 At the first press conference in New York on June 30, 1948, a spokesman claimed the transistor "may have far-reaching significance in electronics and electrical communication." Unimpressed, The New York Times relegated the story to "The News of Radio" page —below the announcement of a soap opera sponsor. 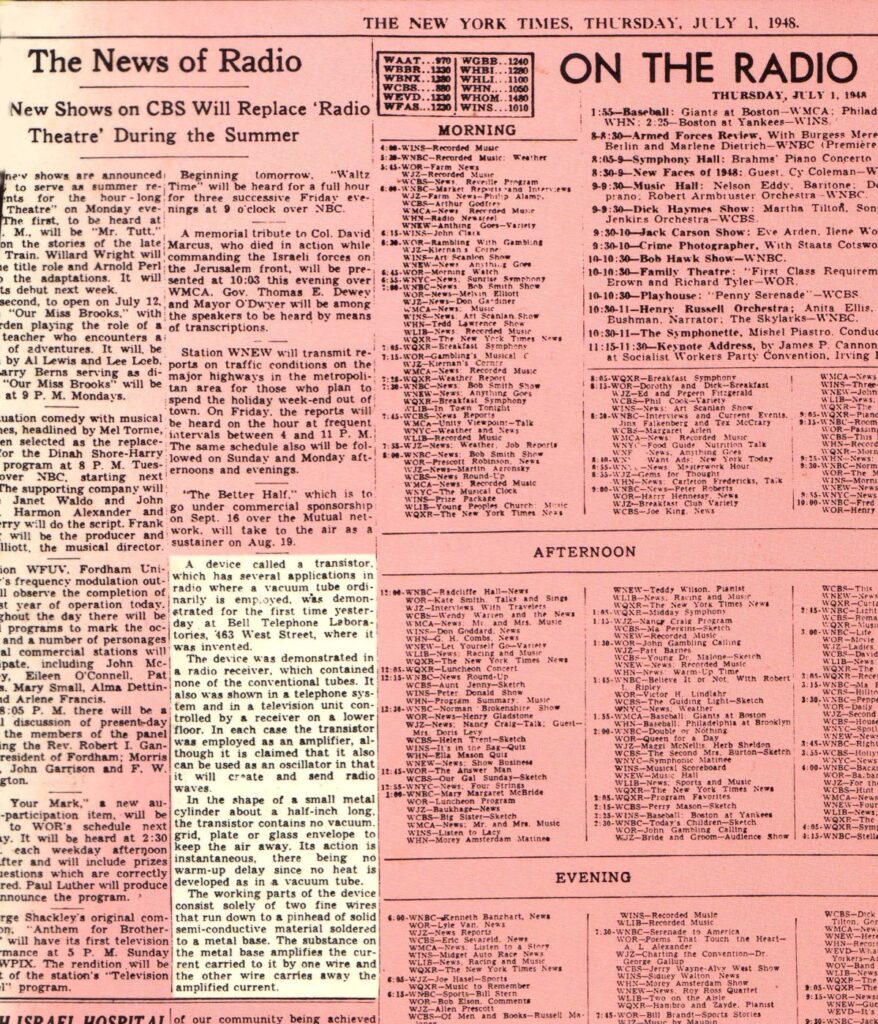 New York Times report on the announcement of the transistor. Published on July 1, 1948

Brattain's colleague John Pierce is credited with coming up with the name. Aware that it operated on the principle of trans-resistance, Pierce derived transistor from the associated electronic component called a resistor.

Western Electric, the equipment arm of AT&T, began manufacturing point-contact transistors in 1951 and, by mid-1952, was producing more than 6,000 devices a month, predominantly for telephone switching systems and hearing aids. 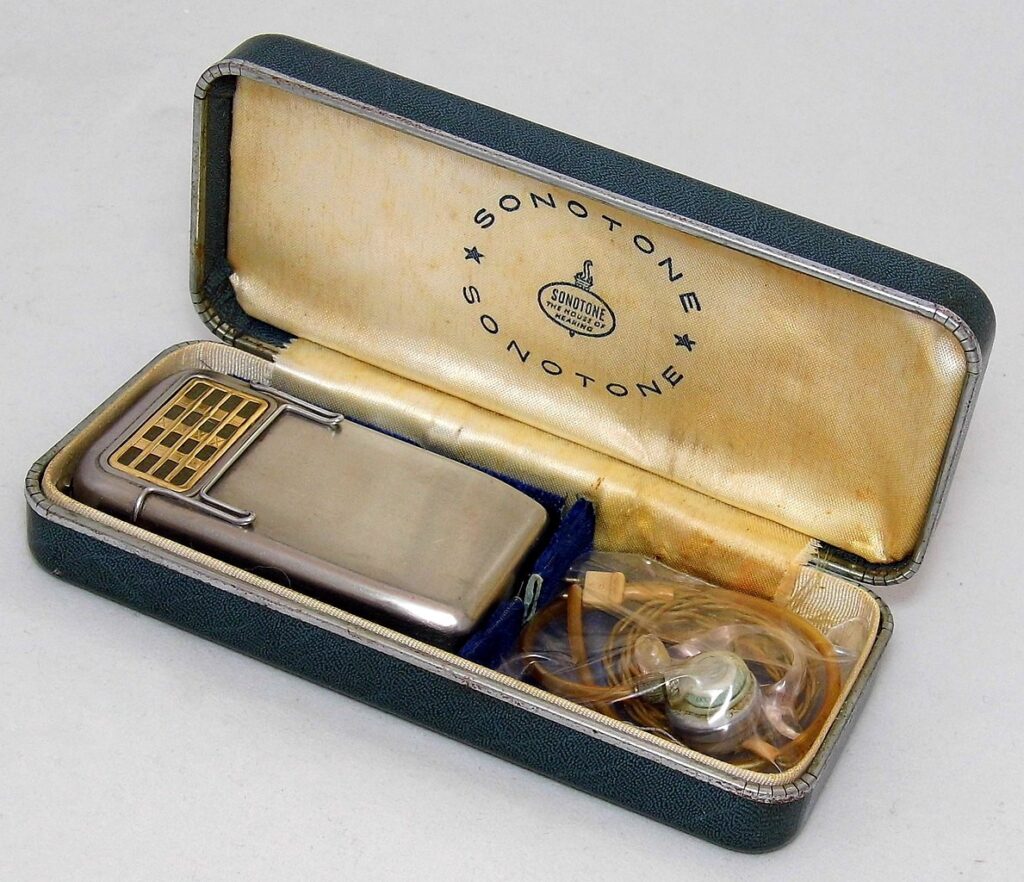 According to Brattain, Shockley, who was pushing to incorporate some of his ideas into their patent filing, "called both Bardeen and I in separately, shortly after the demonstration, and told us that sometimes the people who do the work don't get the credit for it. I told him, 'Oh hell, Shockley, there's enough glory in this for everybody.' " But he "went off by himself and worked at home, and in a way ceased being a member of the research team." [1]

Spurred by professional jealousy at not being more visibly involved with the transistor's invention and a need to maintain his standing relative to his subordinates, Shockley began a month of intense theoretical activity alone. He determined that point-contact transistor operation was not the near-surface field effect that had been assumed but was due to an entirely different structure in the bulk of the crystal called a P-N junction.

As a result of this work, on January 23, 1948, Shockley conceived a distinctly different element, called a junction transistor, that proved to be more reliable and easier to build in volume than the point-contact device. Fabricating working transistors still presented formidable challenges until Bell Labs announced the advance on July 4, 1951. His version became the dominant active electronic building block for the next two decades by enabling new generations of powerful computers. 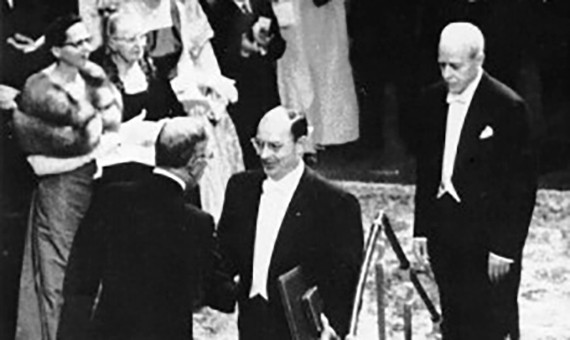 Based on his theoretical contributions to the understanding of semiconductor physics and his invention of the junction transistor, Shockley joined Bardeen and Brattain in accepting the 1956 Nobel Prize in Physics for "researches on semiconductors and their discovery of the transistor effect."

[2] Transistorized! ScienCentral, Inc. and The American Institute of Physics (1999) Retrieved on 1.16. 2016 from: http://www.pbs.org/transistor/album1/shockley/index.html