On September 1, 2022, CHM celebrated the 50th anniversary of the creation of Smalltalk, the transformative programming language, development, and user environment first pioneered in 1972 by Alan Kay, Dan Ingalls, Adele Goldberg, and other members of Kay’s Learning Research Group (LRG) at Xerox PARC. The evening included two events: a reunion and a public program exploring the impact of the iconic software.

Smalltalk was the software component of Alan Kay’s vision for a Dynabook personal computer that was not just a tool but a dynamic medium that could be programmed by the user. Kay believed that such computers would transform education for both children and adults by enabling them to simulate and model the real world. Smalltalk was created to serve this goal, running on Xerox’s new Alto personal workstations.

Dan Ingalls, working with Ted Kaehler, Diana Merry, and others, implemented the early Xerox PARC versions of Smalltalk, starting with Smalltalk-72 (from 1972) through Smalltalk-80, and later contributed heavily to Squeak, the open source version of Smalltalk, in the 1990s. 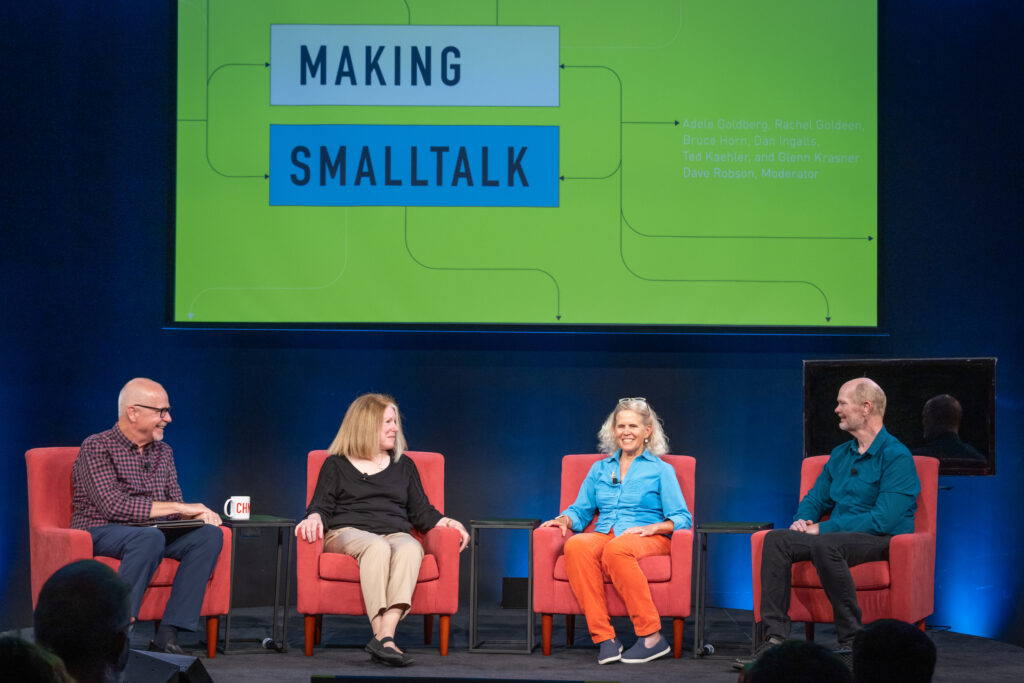 In the first half of the reunion event, moderated by Dave Robson from the LRG, Adele Goldberg talked with Rachel Goldeen and Bruce Horn about their experiences learning Smalltalk at PARC as children.

Adele was exploring how the kids would use Smalltalk’s modeling environment and simulation tools. At first, she recruited the children of her PARC colleagues. Rachel was brought to PARC by her older sister Marian (then age 12), a star pupil who was later encouraged by Goldberg to teach Smalltalk to her peers.

The archival video features kids at work (or play).

Smalltalk kids from the 1970s and a Smalltalk "kid" today.

Bruce, a self-described math geek, got involved at PARC as a 9th grader and credits the experience with making his career. When he was 14 or 15, he got his own office with his own Alto at PARC and worked on projects like writing microcode for the Dorado version of Smalltalk-76, which was shown to Steve Jobs, and traveling to Norway to implement Smalltalk for PARC visiting scientist Trygve Reenskaug. Building on these successes, Adele expanded the program to take Smalltalk into a local school.

Bruce noted that at PARC he was involved with people who were creating the future . . . and who also patiently answered his questions. For Dave Robson, the energy the kids brought to PARC was inspiring. 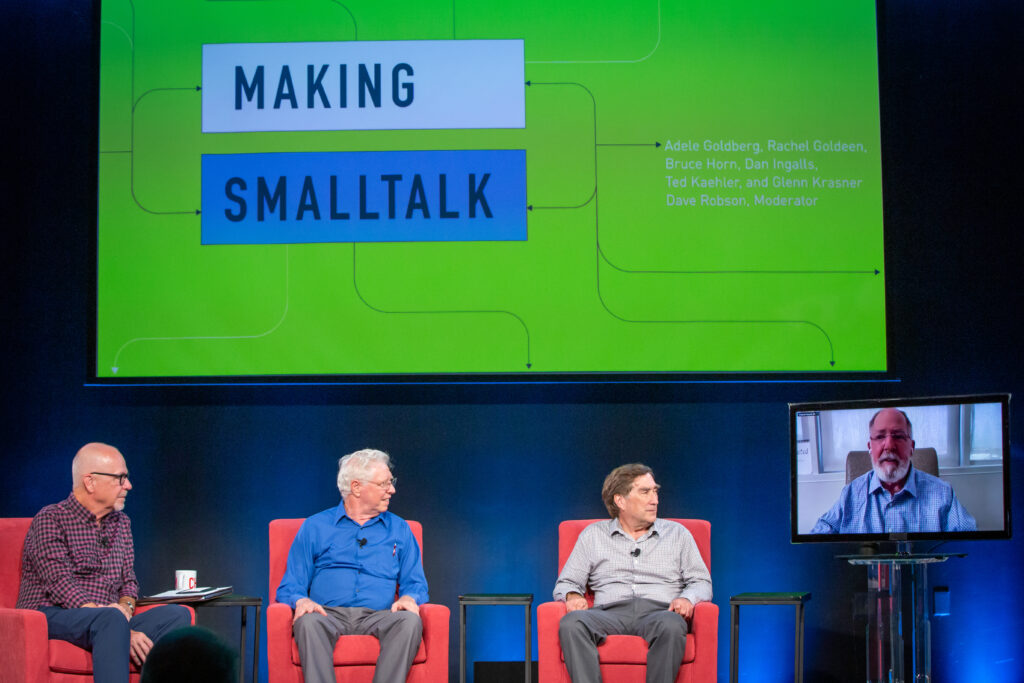 The second half of the reunion event reunited members of Alan Kay’s Learning Research Group. After a brief introductory video featuring Diana Merry-Shapiro and her memories of what she worked on at PARC, Dave Robson hosted a discussion with Dan Ingalls, Ted Kaehler, and Glenn Krasner.

The group shared stories of how they got involved with the LRG. For all of them, Alan Kay’s vision inspired them to get involved. The culture of PARC and the LRG encouraged play and experimentation to try to realize Alan’s goals. Ted described how things really worked.

Dan noted that people in the LRG were free to try anything and play with all the tools they had invented. That play contributed to the progress of the systems. Ted remembered how Alan made programmers play recorders, violas, and ukuleles so they would understand what it was like to be a beginner. He wanted to ensure that the system was easy for lay people and not just designed for systems programmers.

To a degree, that goal was achieved. While ordinary people today are not necessarily coding and making simulations, Alan was right that the computer is a personal, dynamic medium, although perhaps not as creative and compositional as he had hoped.

After the reunion event, a public program featured a discussion with Adele Goldberg and Dan Ingalls moderated by former New York Times technology columnist John Markoff. In a prerecorded video, Alan Kay noted that Smalltalk was done well enough that it’s still interesting today, not just as an historical curiosity but as a vital intellectual vehicle for the university and computer science community.

In the 1970s, some computer scientists thought Alan was crazy when he talked about his vision for the Dynabook. Others wanted to order it, thinking it was a shipping product, not just a mockup. Adele explains what drew her to the project.

Adele describes what captured her interest in the LRG.

Alan wanted kids to have the immediacy and liveliness of an environment as flexible and visceral as playing with clay. He wanted to start with a computer language that was readable to kids and still interesting as they got older.

Dan noted the importance of direct connection for learning. A child will understand a connection if they see something happening when you make a change. Adele emphasized how important it is to add to simple constructs. She says that the challenge of a programming language and modeling world is that what you teach children “has to be true and to stay true.” Designing that is not as easy as it might sound.

Dan Ingalls describes the culture of PARC and the LRG.

The LRG team trusted each other, and that was critical when taking risks to build something entirely new. Although they were the first to provide a graphical user interface, the team struggled to find a workable business model. But, despite the fact that they were not able to monetize their creation, the group’s legacy lives on in generations of programming languages. Smalltalk got out of the lab and into the world.