What's in a name?

Fifty years ago, long before the advent of Facebook, Google, or the later reincarnation of Apple, a front-page article in the tech-industry’s leading newspaper, Electronic News, introduced a new nickname for a cluster of sleepy agricultural communities near San Jose, California. [1] Known nationwide as the “Valley of Hearts Delight” for its bountiful orchards, the Santa Clara Valley would henceforth be known as “Silicon Valley” after a key material used in semiconductor manufacturing, a booming new industry of the area.

As the fleshpots of San Francisco 60 miles to the north were expanding down onto the Peninsula at that time, the tabloid press assumed silicon was a misspelling of silicone, a chemical compound better known to their readers for amplifying the female anatomy. Today no one makes that mistake. Silicon Valley is famous worldwide as a center of entrepreneurial and technological innovation. This is the story of how Silicon Valley got its name.

In 1965, Electronics magazine published an article by Gordon Moore, Director of Research at Fairchild Semiconductor in Mountain View, showing that over the prior five years the number of electronic elements on his company’s silicon integrated circuits had doubled every year. Moore’s observation, later immortalized as “Moore’s Law,” heated up already intense competition between local startup computer chip companies as managers urged their technologists to beat Fairchild’s rate of innovation. 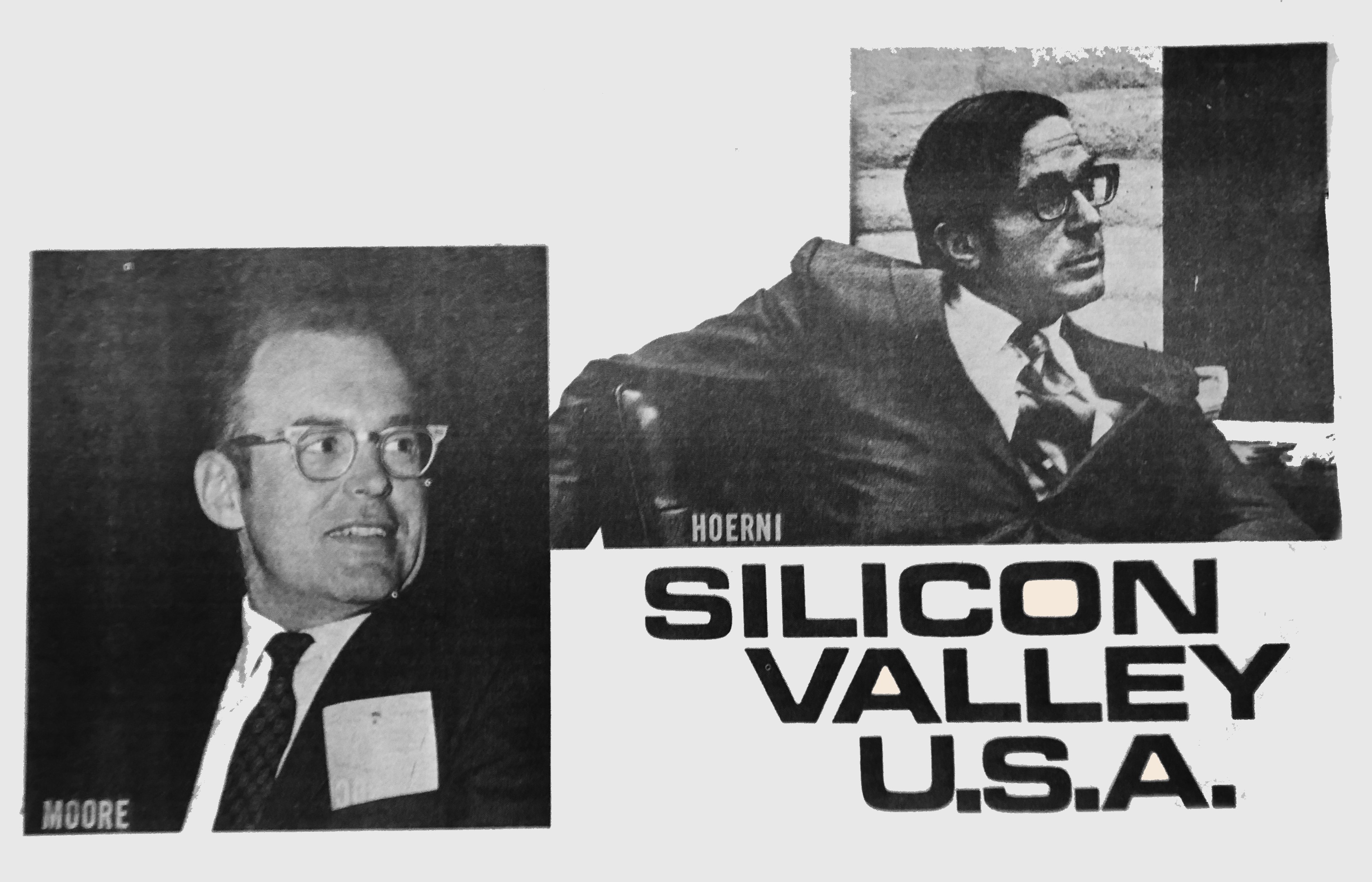 Don C. Hoefler, a veteran electronics industry gadfly and journalist reported regularly on their progress. On January 11. 1971, Electronic News published the first of Hoefler’s three-part series on Fairchild and the history of the semiconductor industry in the Bay Area under the banner headline SILICON VALLEY U.S.A. [2] This was the first time the name had appeared in print. It stuck.

Several years ago, Jim Vincler, co-owner of Vincler Communications, Inc., Redwood City, CA told me how it happened: “Don was a columnist for Electronic News (EN), a weekly tabloid that covered the electronics industry. EN landed on the desks of electronics industry executives and managers on Monday mornings. These people did not start their work week before reading EN. They wanted to know what was being said about the people, the products, and the companies in the industry. EN was the Bible. If a story didn’t appear in EN, it didn’t happen. 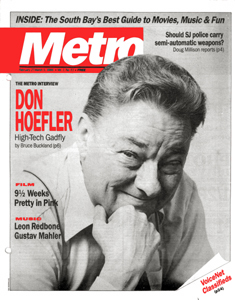 Don was working for several weeks on a story about how the semiconductor industry blossomed in the Santa Clara Valley during the Sixties. One day a couple of marketing guys called Don and said they were going to be in San Francisco that day and invited him to lunch. I worked with Don as a reporter for EN and tagged along. During the lunch conversation, one guy said something about “Silicon Valley.”

I saw Don’s eyes subtly light up like a poker player who had just filled a straight, as he asked, “Silicon Valley? Where’d that come from?” The marketing manager said, “Oh, that’s what the guys call it.” We shared our amusement about the moniker that the industry sales people had created and then went on to other topics.

In a 1981 San Jose Mercury News article, Hoefler wrote “The rationale was simple enough: These revolutionary semiconductors are made in a valley, from silicon — not silicone, please ­­– the second most-abundant chemical element (after oxygen) on Earth. How was I to know that the term would quickly be adopted industry-wide, and finally become generic worldwide?” 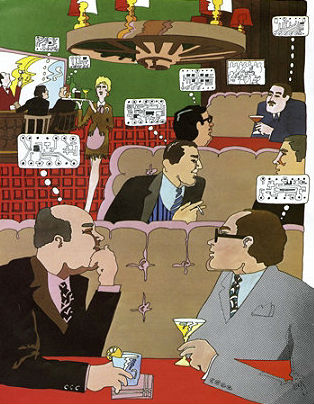 Don Hoefler left EN to start an industry newsletter called Microelectronic News (MN) that he continued to publish until his death in 1986. Loved by the rank and file but feared by management, he laced MN’s pages with tales of the follies and foibles of Valley CEOs. Corporate gossip, office romances, rumors of product failures, and insider details of financial shenanigans were gathered at his field office — a bar stool at Walker’s Wagon Wheel tavern in Mountain View. [3] Copies were banned from many company offices. An obituary noted that “He was liked by some, disliked by many, and read by all.”

Even though Silicon Valley was well established by the time of his passing, Hoefler probably had little idea of how much Moore’s Law, by then firmly established as a self-fulfilling prophecy, would usher in the digital revolution and continue to drive innovation fifty years after his proclamation. [4] In 1971, the world feted Intel engineers for squeezing 2,300 transistors onto the 4004, the company’s first microprocessor chip. Apple’s announcement a few weeks ago of a new Mac M1 processor chip containing 16,000,000,000 transistors drew little more than a yawn from the cognoscenti.

The Silicon Valley label also took on new meaning. It no longer signifies just a geographical location. The phrase “Silicon Valley is not a place but a state of mind” that inspires entrepreneurs from Bangalore and Beijing to Boston and Berlin has been attributed to several local luminaries, including venture capitalist John Doerr and marketing maven Regis McKenna. [5] This loss of a purely local association has galvanized several new appellations: The Economist magazine likes “Empire of the Geeks.” Some local geeks prefer “Nerdistan-by-the-Bay.”

For decades, successful Silicon Valley companies looking to expand have looked outside the area to take advantage of lower costs of doing business, to tap into new talent sources, and to diversify their base of operations. Fairchild began this trend with factories in other U. S. states and Hong Kong even before Heofler wrote his article: AMD established plants in Texas and Intel in New Mexico in the 1980s. Every time this happens, analysts predict the beginning of the end for Silicon Valley’s leadership in innovation and entrepreneurial prowess. The drumbeat has grown ever louder with recent high-profile moves by HP, Oracle, and Tesla and impacts of the pandemic on business operations. However, a recent article, “Is Silicon Valley losing its shine?”, in Bloomberg noted that in 2020, despite the pandemic, the percentage of venture capital dollars invested in the area actually increased by several points to more than 40% of the total.

Check back in fifty years. I don't have a crystal ball to know how it will all shake out but I wouldn't be surprised to learn that the Silicon Valley High-Tech Heritage Trail continues  as a popular pilgrimage for high-tech history buffs.

1] The front page of that issue of Electronic News is reproduced here. Note that the header date incorrectly shows 1970, probably due to the typesetter not updating the file for the first issue of 1971.

2] A noted in Hoefler’s introduction, Fairchild had already spawned 23 semiconductor companies by 1971. More than 100 followed over the next decade. In turn, these have spun-out hundreds of progeny involved in every aspect of technology that make up the Silicon Valley of today. See the story Spinoff: Fairchild & the Family Tree of Silicon Valley on the CHM website

3] The tavern was razed in 2003 following entanglements over illegal gambling, the site remains vacant today. Several artifacts, including an original wagon wheel and a five-and-a-half foot section of its wooden bar, are on display in the Computer History Museum Revolution exhibit.

4] Numerous books, videos, and articles tell the story of the people, politics, and products that led to the modern Silicon Valley. The video presentation “How a Century of Entrepreneurial & Technology Innovation Created Silicon Valley” describes how successive waves of innovation in electronics hardware, from disk drives and silicon chips to the personal computer and the smart phone, built on the skills and experience of prior decades to launch a radically new product or service that changed the world in ways that even their inventors could not have predicted. Read the original article here.

5] The phrase may have been borrowed from “California is a state of mind” quoted by author Ross Macdonald in Archer in Hollywood (1967) and used by State Librarian Kevin Starr at the National Symposium on the California Gold Rush, Oakland Museum, CA (January 24, 25 1998). He said that during the Gold Rush era “California was as much a state of mind as a geographical location” and explored this theme at length in his book Americans and the California Dream 1850–1915 (1973).