On Tuesday, July 16, 2013, a group of almost seventy people attended a CHM SoundByte lunchtime lecture entitled The Totalisator – An Algorithm That Led to an Industry. The audience was a blend of familiar faces, newcomers, and even some staff members. The topic however was new to the Museum, there were no prior lectures, no objects or documents in the collection, and only one peripheral mention of totalisators in the Revolution: The First 2000 Years of Computing exhibition. More on that later.

Bob Doran is a computing veteran with a Silicon Valley stint as Principal Computer Architect at Amdahl Corporation from 1976 to 1982; he is an educator who taught The City University London and Massey University in New Zealand. In the 1980s and 1990s, he was the Head of Department and Professor of Computer Science at the University of Auckland, New Zealand. Like many people in the field, Bob has been fascinated by its history and in recent years his curiosity has shifted towards the deeply antipodean story of totalisators.

Bob came to visit the Museum in the spring of 2009 after being introduced by CHM trustee David Anderson, whom he knew from his days at Amdahl. I welcomed Bob and took the opportunity to learn more about totalisators, an area about which I knew relatively little. In the early days of content development for Revolution, the machines had been considered for inclusion, but a lack of artifacts and their almost standalone position in the historical threads we were weaving led to the story being dropped.

The history of mechanized racetrack betting is as much a technical story as it is one of social change. On the heels of the industrial revolution, a growth in wealth amongst a newly expanding middle class resulted in disposable income. Mid-19th century England saw an increase in gambling and particularly betting on horse-racing became popular (by grandham). Spanish-born Joseph Oller became interested in bookmaking and the issue of betting fairness when returned from his family’s adopted home of Paris to Spain as a student. While observing the conflicts that arose from betting at cockfights, he devised a system known as pari-mutuel betting to ensure fair payouts. The mathematics are straightforward: The bets on each of the competitors (Si) are summed and the percentage (p) of the bookie’s take is subtracted. The remaining pool is then divided by the bets on the winner (Sw) and paid out. Oller began to implement this system in Paris in the 1860s – wagons with display boards for bets placed were mobile bookmaking stations. While this type of gambling was banned in France from 1875 until 1887, the pari-mutuel system started to spread to other countries and became known as totalisator after the French word for counter or totalisateur. Oller continued to work in entertainment and co-founded the legendary Parisian cabaret Moulin Rouge in 1889.

The early totalisator machines were simple, manually operated devices that recorded bets on each horse and grand totals using a mechanical counter. While the perception of greater trustworthiness over a bookie was somewhat justified, it wasn’t until there was a legal framework to protect bettors by regulating the operation of these machines. Imported totalisators had arrived in Australia and New Zealand in the late-1870s; while banned in Australia, assigning monopoly operator rights to the racing clubs in New Zealand offered a great source of incoming to the clubs.

With the success of the machines an operational issue became apparent: the more bets would be placed, the more the machine with its serial operation became a bottleneck. Replacing the simple machines with human power provided a temporary solution. Buildings occupied by sellers, computators, and display operators took bets as the input, manually computed the totals, and output the running bet totals on display boards. These buildings too were called totalisators. Centralizing and parallelizing the operations offered a reprieve, but with the steady increase of bets, automation was considered again. The larger racing clubs had the funds available to invest.

The engineer who took on the challenge was George Julius. The railway engineer had experimented with designing voting machines and then adapted the design for totalisator use. Under the company name of Julius, Poole & Gibson, the Sydney, Australia, firm developed their initial large-scale automatic totalisator in 1912 to be put into full operation for the 1913 Easter weekend races at the Ellerslie racing track near Auckland, New Zealand. The system successfully handled 83,029 bets on the Monday of the races placed at 30 ticket stations. This translates to roughly 10 bets per minute, which was close to the capacity of the system. 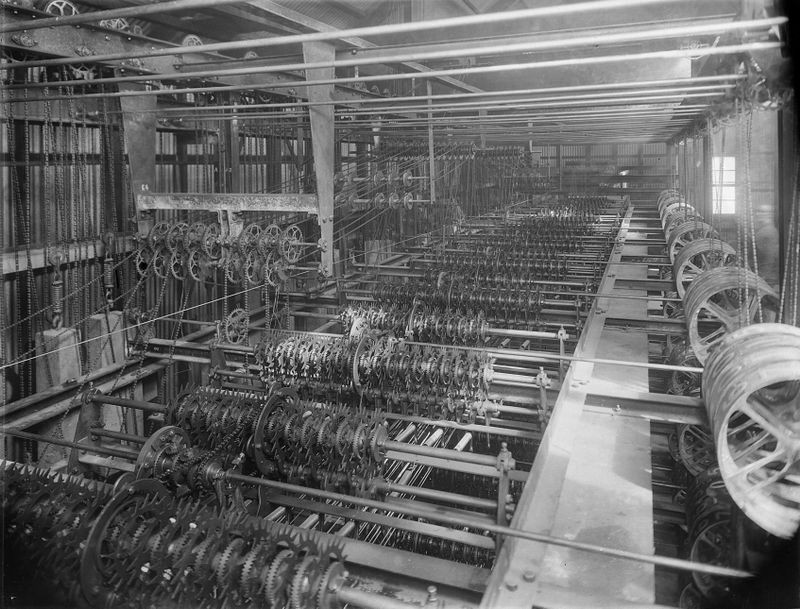 The Ellerslie totalisator was a completely mechanical device, driven by a clockwork mechanism. The purpose of the machine was to add the bets for each horse (Si in the equation above), to calculate the grand total for all bets (∑Si), and to display the values on indicators. Numbers in the system are represented by shaft rotations, but as opposed to, e.g., later differential analyzers, the shaft rotations represent discrete numbers: 20 unit bets of 10 shilling each was one full shaft rotation, i.e., each unit bet advanced a rotating shaft by an angle of 18˚. The main issue then was how to feed bets placed at parallel sales stations into the system, which was resolved by using chains of differential gears.

Similar to a differential in a car, which splits the driveshaft rotation between two half-shafts, one for each driven wheel, here the differentials add rotations from multiple inputs to one central shaft. An escapement mechanism, corresponding to a sales station, controlled when a differential added its rotation to the central shaft. These shaft adders effectively were parallel to serial converters, summing the rotation of all inputs onto rotating output shafts.

In 1917, Julius founded Automatic Totalisators Ltd. (ATL) and the machine design continued to be enhanced as more of them were installed, primarily in Australia and New Zealand. After 1920, ATL’s totalisators were electrically driven and used clutches and electromagnets for the adders and escapements, reducing the number of required differentials per adder. The ticketing machines therefore had electrical connection to the adders (instead of a pulley system) and could also print a ticket for each bet. The ticketing machines themselves were complicated pieces of machinery, which had to operate inside a framework of rules and regulations. ATL expanded beyond Australia and New Zealand into India, South East Asia, and Canada, and by the early 1930s into Britain and the United States. 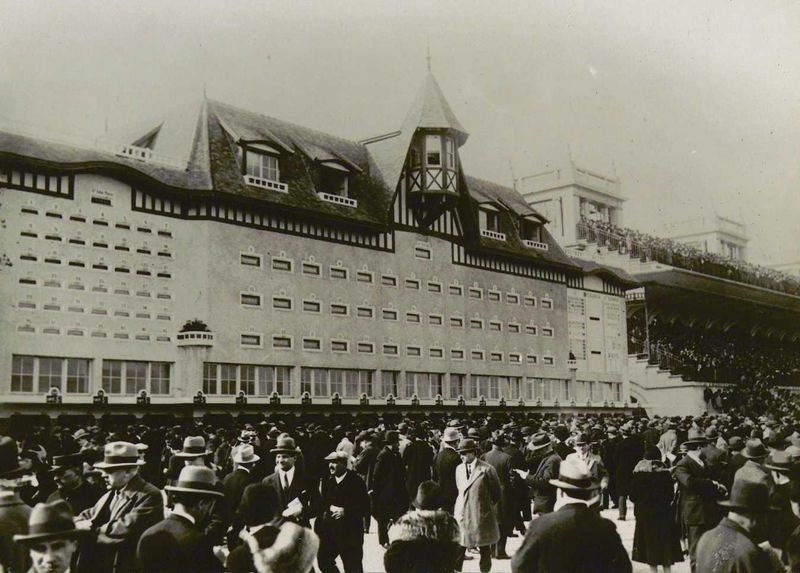 ATL’s totalisators dominated the world market. The largest of the machines was installed at the Longchamp, Paris racetrack in 1928: 273 ticket stations processed hundreds of thousands of bets per race with a peak of 300 bets per second. The system was operating until 1973.

New competitors appearing on the scene challenged ATL’s near market monopoly in the 1930s. Mechanical totalisator developments continued well into the 1960s with improvements in reliability, additional features like odds calculations and different bet types, and technological changes like relays to implement memory and logic. Computerization of totalisators began in the 1970s and the companies that previously dominated the field found themselves in a niche market as general-purpose computers took over.

A noteworthy connection between totalisators and computing occurred in the late 1940s and this is the episode mentioned in the Museum’s Revolution exhibition. Racetrack betting was not automated in the United States until the 1930s when an ATL machine was installed in Miami. Harry Strauss, an engineer from Baltimore, founded American Totalisator in the 1930s and built his machines out of telephone relays. Quite wealthy and inspired by the potential of electronic computing, Strauss invested in Eckert Mauchly Computer Corporation, the company set up by the ENIAC designers to commercialize the technology, in 1948. Only a year later, Harry Strauss died in a plane crash and the ensuing financial difficulties for Eckert Mauchly Computer Corporation, led to the buyout by Remington Rand. 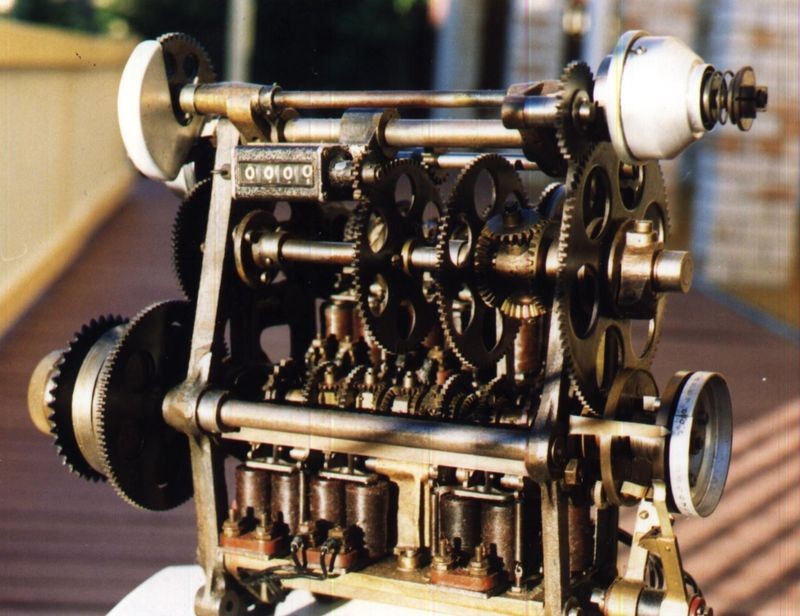 In the four years since Bob Doran first contacted the Museum, he put us in touch with Australia-based totalisator expert Brian Conlon who donated a shaft adder to CHM’s collection. This particular adder came from a machine originally installed at the racetrack in Mentone, near Melbourne, Australia. The design of the adder dates from the 1920s, but this unit wasn’t installed at Mentone until the 1930s when totalisators were legalized in the Australian state of Victoria. In 1948, the totalisator moved from Mentone to Ipswich, by Brisbane, where it stayed in operation for another thirty years until it was replaced by a computerized system based on DEC PDP-11 minicomputers.

Bob Doran has donated a second adder to the Museum’s collection. This smaller adder is a post-World War II unit, ca. 1947 and came from the machine at Manawatu Racing Club’s racetrack in Awapuni/Palmerston North, New Zealand. Bob graciously hand-carried the adder from New Zealand when he visited CHM for his talk.

The shaft adder donated by Brian Conlon has undergone some preservation work by longtime CHM volunteer Tim Robinson. It has been put on display in the Museum’s lobby in June of 2013 and will remain there throughout the summer. While only a tiny fraction of these large machines, the adder gives a sense of an era in which automated mechanical calculation helped usher in new applications at a scale previously unknown.