Today election news, from candidate tweets to campaign trail happenings, is widespread across various media, delivered personally to us via the internet on our device of choice. But in the mid-1990s, getting election news other than through traditional media, like television, radio, and newspapers, was a novel idea.

In 1996 Virtual Entertainment Inc. released the first ever Vote America: Your Field Guide to Electing a President software. This interactive CD-ROM was designed to educate users on the workings of a presidential campaign and to help voters decide who to cast a ballot for on election day. One of the unique aspects of the software was the ability to download campaign trail updates from Virtual Entertainment’s website throughout the 1996 campaign. As soon as the user connected to the home page for Vote America it would update the software with the latest polls and candidate news provided by ABC affiliate WMUR.

Vote America is now a part of CHM’s permanent collection in the Jim C. Warren papers. As the 2020 presidential election approaches, CHM is exploring the trajectory and ongoing impact of technology in elections, including my journey as digital archivist to preserve and demo Vote America.

The Jim C. Warren papers played a large role in the development of our digital preservation practices at CHM. Most of the software in this collection was unopened and fully intact. In 2016, 20 software items were pulled from this collection, including Vote America, to test the archive’s new digital preservation workstations and guidelines. We wanted a sample set of software that was released between the late 1970s–2000, which included different media formats, types of software, and types of publishers to determine what area of our software collection we should focus our digital preservation efforts on. Vote America was chosen because it was an interactive CD-ROM from the mid-1990s that also came from a small publisher. I created a disc image, a file that saves the entire data from a disk, including file structure, of Vote America using IsoBuster. The files from the disk were extracted as an extra preservation measure. Both the disc image and extracted files were deposited into our digital repository for long-term storage.

I pulled a copy of the extracted files from our digital repository to run the software. The system requirements for Vote America are pretty straight forward: Windows 3.1 and a version of Quicktime that would have been installed on a user’s computer in 1996. I used winevdm (also known as otvdm), which is a system adapted from Wine (“Wine is Not an Emulator”) software by the programmer otya128 that allows you to run older Windows programs in a 64-bit Windows environment. With winevdm and Quicktime 2.1.2 installed, I ran the executable file. Most of Vote America rendered properly. There are some issues with the video playback, where half of the video will show and you can hear the audio, but the other interactive portions of the disk were playable. I didn’t try to troubleshoot the video problems as all of the video files were extracted from the disk and can be played in VLC media player. What I was most interested in was the interactive activities found within the software.

The Vote America software is comprised of seven modules: “Introduction,” “How Elections Work,” “The Issues ’96,” “The Candidates ’96,” “Online Campaign Connection,” “Test the Candidates,” and “Test Your Political IQ.” Each of these modules are meant to help the user educate themselves on the election process and decide who to vote for.

Explore "Vote America" On Your Own!

Check out all seven modules in action.

One of the more robust modules is “How Elections Work.” This module is split into another six sections and focuses entirely on educating users about the mechanics of the campaign trail, a timeline of presidential elections, how to vet media sources for information, campaign finance, and political cartoons. This module focuses less on the individual candidates and their positions on issues, but on the overall election process.

Ever wonder how the campaign process works? This video of the “animated model of a campaign” walks you through a brief history of presidential campaigns and how a typical campaign is run in 1996.

This gif shows “The Candidates ’96” module. Each tab represents candidates that ran, potential candidates, and other major players as of December 20, 1995.

After users explored all of the modules, they could take the “Test Your Political IQ” test. The test features 30 questions on various topics such as the campaign trail, structure of our government, interest groups, and other election fun facts. Depending on your score the test would tell you if you are a “Political Guru” or a “Political Bystander.” Don’t worry all of the answers to the test can be found within the software and you can retake it as many times as needed. 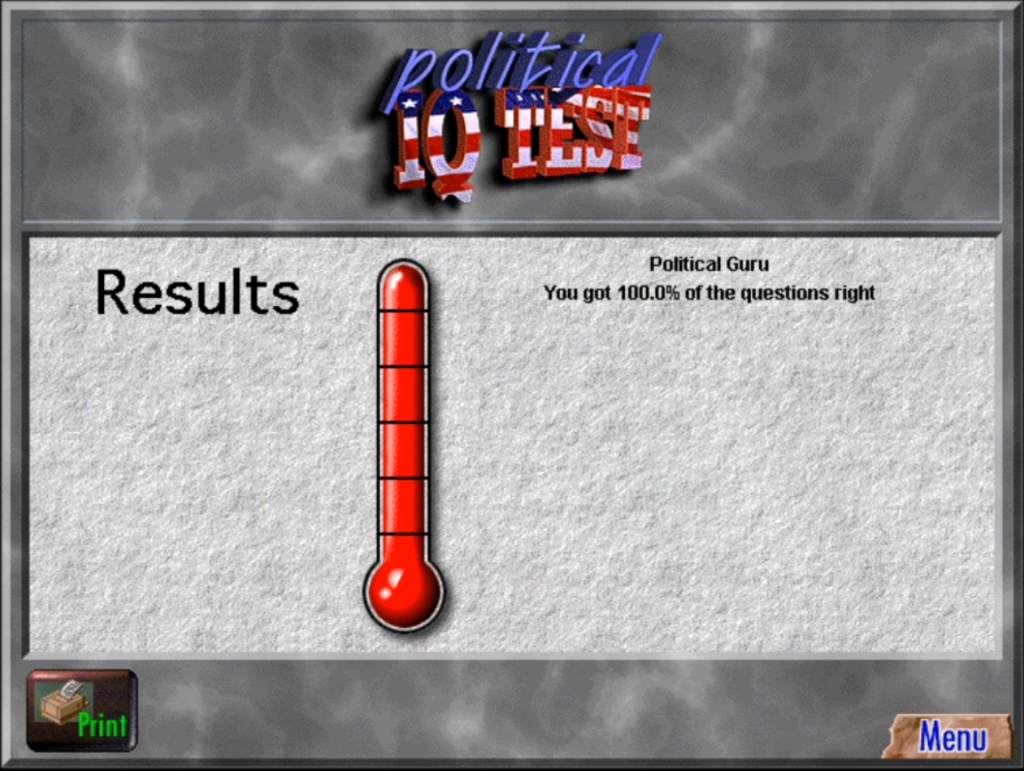 Screenshot of a 100% results page for the “Political IQ Test.” Do you think you have what it takes to be a “Political Guru”?

Overall, Vote America is a unique glimpse into alternative and interactive ways one could educate themselves on the election process. Virtual Entertainment Inc.’s president David Blohm told the New York Times in 1996 that they were “considering releasing Vote America every four years.” However, the company never released another Vote America. Vote America did show the potential of interactive CD-ROMS that could be updated via the internet.

Elena Colón-Marrero is the digital archivist at the Computer History Museum (CHM). She has been at the museum since 2016 where she manages the museum’s digital collections and historical software collection. Previously, Colón-Marrero served as the 2015 John Foster and Janet Avery Dulles Archival Fellow at the Mudd Manuscript Library at Princeton University. She has her master of science in information from the University of Michigan with concentrations in archives and records management and digital preservation.