A Journey into Digital Art: Reflections by Photoshop Hall of Famer Bert Monroy

Bert Monroy, Times Square, 2011. Monroy created Times Square over four years. It contains over 750,000 layers and depicts dozens of digital imaging artists and pioneers, including Photoshop creators John and Thomas Knoll, as well as some of Monroy’s family and friends. Times Square is currently on display in the Museum’s exhibition, Make Software: Change the World!

I’ve been drawing since I was two years old. I had been getting in trouble my entire life for drawing in class, and on the suggestion of one of my teachers, I tried out for the High School of Art and Design. I majored in advertising and illustration while learning from masters of their trade. Later, I attended the School of Visual Arts. All my training led to a career in the advertising industry, where I was an art director and creative director for quite a few ad agencies in NYC. I also did an occasional commercial illustration. Painting photorealistic images remained my passion. I experimented with oils, watercolors, pastels, you name it, I tried it all and although I got fairly good results, I was never quite satisfied.

In the early 1980s, I started a small catalog production studio with a friend of mine. My partner was very into tech and told me we needed to “computerize.” I did not object but warned him that he should not expect me to sit there and start entering data every night. He countered that a new computer was coming out and I would be able to do my layouts on it. Skeptical but curious I went down to the local computer store and saw this little box called the Macintosh.

I sat in front of it and grabbed the little bar of soap called a mouse and started to move the cursor around. I drew a box. Cool! I selected and moved it. Yes, I could do layouts on this thing! Then, something happened. I thought I broke it. The sales clerk came over and said “Oh, you just went into Fatbits.”

Fatbits? I had zoomed in to the pixel level. A light suddenly went on in my head! No more shaving my brushes or using oversize canvases to get the detail I wanted. This was the future! This was my medium! It was only black and white on this tiny 9-inch screen but it completely took me by storm. I was in that store every day until my machine arrived. They didn’t mind because I was doing MacPaint demos to other potential buyers. 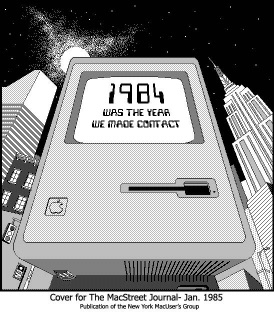 When we set up our new machine in the studio, the rest of the business went away. That summer I created a product called HumanForms. It was a collection of over a thousand body parts that had small crosses at each joint. Connecting the crosses and then erasing them allowed you to compose human bodies in any pose desired. My partner and I gave up the catalog production studio and built a new company around this new machine. We sold everything from ink cartridges to mouse pads.

In 1984 I became very involved with the New York Mac Users Group and later art directed their newsletter. A community of people that shared my enthusiasm for the Mac was easy to find. Soon I was doing demos at user group meetings, schools, and trade shows, like MacWorld.

The industry was growing at an incredible pace. Every week saw the introduction of new software and peripherals that greatly enhanced the capabilities of that little box on my desk.

The third generation of the Mac, the MacPlus, took this new industry known as desktop publishing to a professional level. Linotype introduced the Linotronic 300, a professional level typesetter that took text and images from the Mac and printed out at high quality, ready for production. Around the same time Letraset put out the first image manipulation product called ImageStudio which allowed you to retouch images scanned on any of the many of scanners that were hitting the market. They were all in black and white but for newspapers, desktop publishing went pro.

It wasn’t long before color finally arrived with the Mac II! PixelPaint was the first product that I enthusiastically dove into. I was painting day in and day out. 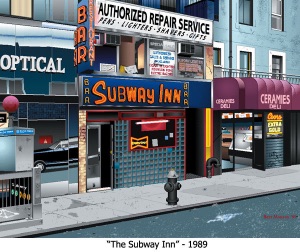 Anything being produced was still considered a novelty—too pixilated and not good enough for the professional world. In February of 1990, everything changed—Adobe Systems introduced Photoshop. Finally that little machine became the mainstream of the business I had known since I was a kid. I started doing a monthly presentation at Apple NY entitled, The Mac in Advertising. Each month the number of attendees grew larger and larger. It wasn’t long before I found myself back in ad agencies; not as an artist but as a consultant, where I helped convert many of them to the new technology and trained their staff to use it. The Mac had grown up!

Photoshop helped push the Mac into areas where personal computers were unheard of. It became the tool for amateur photographers to create masterpieces. Professional illustrators went digital. Photoshop became a verb.

In Photoshop I see the evolution of a medium. When Photoshop Version 7 introduced the Brush panel, suddenly I could create my own brushes with features unparalleled in traditional brushes. Combining all this with the Wacom Cintiq allowed me to work directly on the screen using a stylus the way I was traditionally trained. All the hand techniques for effects with brushes were now available in the digital realm. 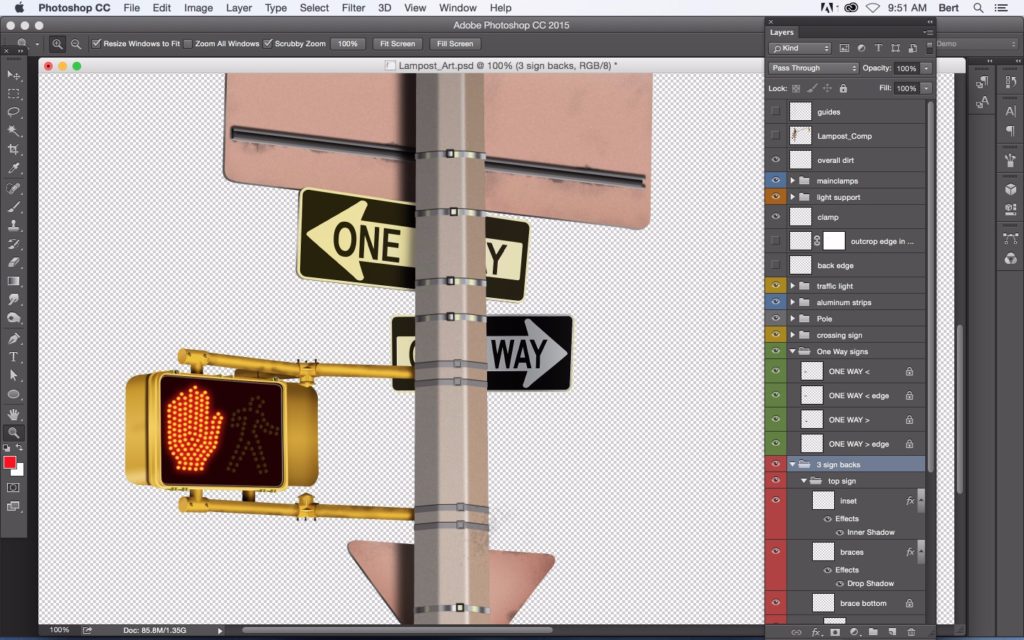 Photoshop opened possibilities that never existed before: brushes, pens, gradients, all available with the click of a button. This gave the artist the ability to let their creativity flow freely. When using traditional media, changing direction requires cleaning your brushes, mixing new colors, waiting for some things to dry—a maintenance that distracted the workflow. Now, no maintenance, no clean up.

Let’s not forget another very important feature the computer has over traditional media the Undo feature. Make a mistake, gone in a click.

Today, most images that we see were opened in Photoshop at some point. From theatrical matte paintings to product enhancements or the removal of that blemish on the cover model’s face—Photoshop is the tool used. As I always tell my students, “If you can imagine it, you can create it.” Photoshop can make it happen.

This blog was written in connection with the CHM Live show “Photoshop Magic: A Lecture by Digital Artist & Author Bert Monroy.” The event took place at the Computer History Museum on June 15, 2017.

You can also see Bert Monroy’s largest artwork to date, Times Square, on display in Make Software: Change the World! at the Computer History Museum.

Bert Monroy was born and raised in New York City where he spent 20 years in the advertising industry as an art director and creative director for various agencies as well as his own. Monroy currently lives with his wife in Berkeley, California.

What You Do Is Who You Are: Exploring Culture With Ben Horowitz