Brothers and software entrepreneurs Stephan and William Adams created their own software company, Adamation, in the 1980s that was among the first to write consumer and custom enterprise applications software for Steve Jobs’ NeXT computer platform.

The older of the brothers, Stephan, was born in the neighborhood of Watts, Los Angeles, while William was born in Fullerton. To distance the family from the LA race riots, the boys’ mother moved to Placentia, California in Orange County, near Anaheim. A social worker, she raised the brothers and their sister on her own after their father, a boiler operator on Navy ships in World War II and a typewriter repairman, died when Stephan was in fifth grade.

A nearby uncle, who was an engineer working on the Minuteman ICBM project, introduced young William to computing through a Commodore PET home computer. William was academically bright, excelling in math, while Stephan was entrepreneurial at a young age, starting a business as a teen installing lawn sprinkler systems in the neighborhood, as well as taking up photography and sports. When he was cut from the high school baseball team despite being the best player, possibly due to his race, Stephan vowed always to be his own boss in the future, further cementing his entrepreneurial leanings. William went on to study electrical engineering and computer science at UC Berkeley, and Stephan joined him there as a junior college transfer, graduating with a degree in sociology.

I even had investors say, “We will never, ever invest in a company like yours.” Well, that’s code for a lot of words.

At Berkeley, William worked at the campus computer store, and it eventually became a full-time job. This was in 1984-85, when the Macintosh began to make big inroads on campus and a growing community of Macintosh users centered in Berkeley emerged. Both Mac fans, the brothers admired Apple cofounder Steve Jobs and, with many of their peers at Berkeley and Stanford starting technology businesses, and companies like Adobe and Sun still in their infancy, it seemed only natural that they should start one too. While still students, they launched a two-man software company named Adamation in Oakland, with William writing the code and Stephan running the business. They started out by doing contract software jobs for the Macintosh.

As Black entrepreneurs with Berkeley educations, the Adams brothers experienced a complex combination of both structural discrimination and privilege as they started Adamation. One bank in Berkeley refused to let them open a bank account, even to deposit money. Fortunately they were able to open an account at a Black-owned bank. Nevertheless, their social connections at Berkeley stood them in good stead. Stephan’s involvement with Berkeley student activism introduced him to a local video production company that had offered the students pro-bono services. This relationship resulted in the company offering Adamation free or deferred rent on spare office space they had in Oakland.

It’s not a meritocracy, and everybody knows that. But if you focus on the fact that it’s not, then you wouldn’t get up in the morning.

A key champion the brothers found was a White ally named Stuart Grady, who broke down the secret behind Silicon Valley’s “meritocracy.” To truly be successful in the Valley, Grady told them, one had to gain access to a rarified “5%” of elites that Grady believed ran the tech industry. If one could get into that 5%, in part through networking with the right people and being fortunate enough with timing and capital to enter into new markets as they were just starting, then race did not matter. But the barrier between those inside and outside the 5%, where most people of color are, is huge. The Adams brothers put this philosophy into practice with their decision to develop for Steve Jobs’ NeXT computer platform.

When Steve Jobs left Apple in 1985, the Adams brothers decided their best bet to make it big would be to get in on the ground floor of whatever Jobs was doing. That turned out to be founding computer and software company NeXT. True to their word, the brothers were among the first to create custom software for Jobs’ new company, and Adamation received a major profile in the premier issue of NeXTWORLD magazine in 1991. Being an early adopter of NeXT and cultivating an important market relationship with Steve Jobs allowed the Adamses access to the Silicon Valley 5% elite and to parlay it into a profitable business, providing the foundation for the rest of their careers. 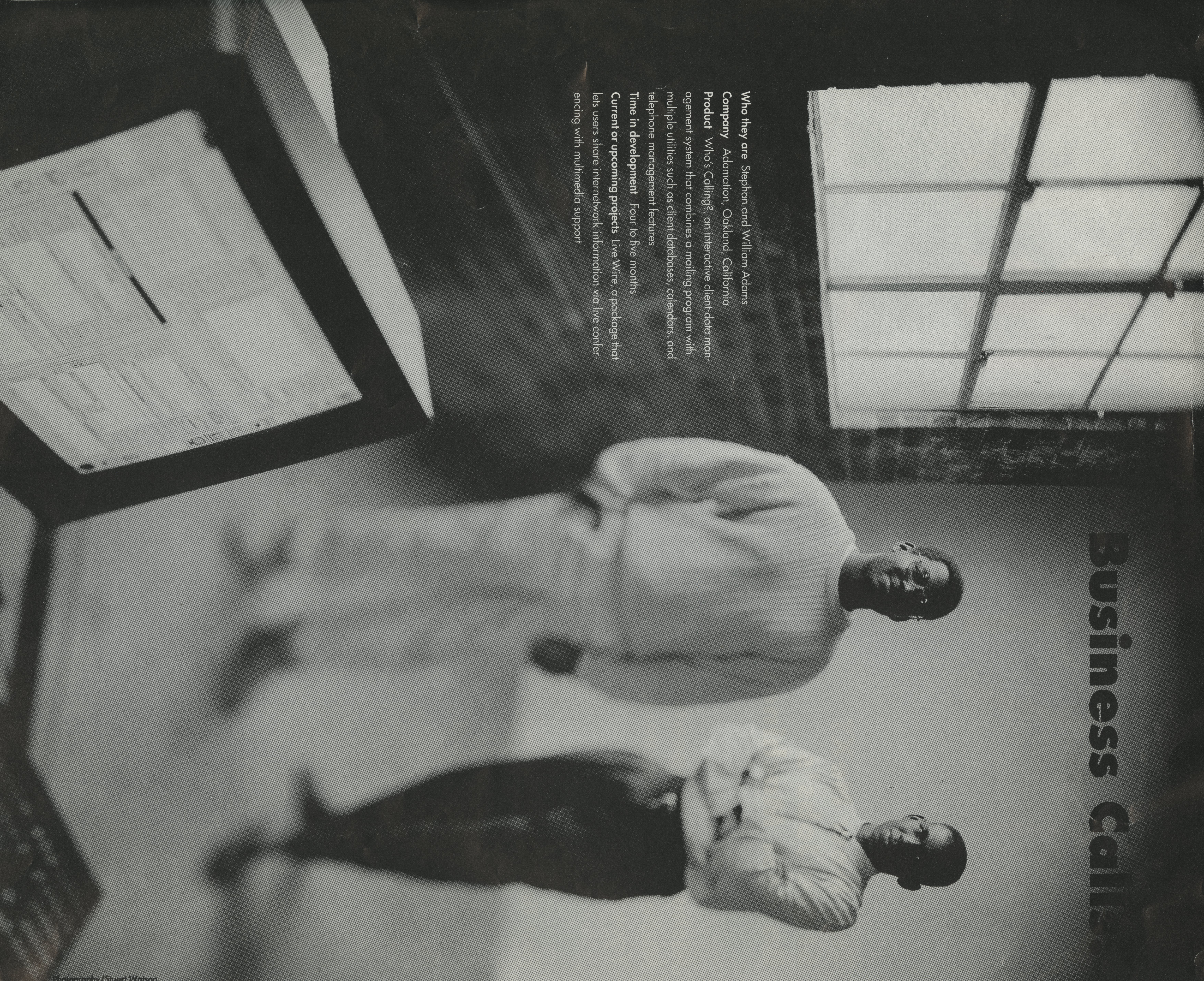 Profile on Adamation in the 1991 premiere issue of NeXTWORLD Magazine. Courtesy Stephan Adams.

Adamation’s first success was a contract to port the Ingres database for DEC systems to the NeXT platform. Ingres was a relational database system created by two Berkeley computer scientists and later commercialized. During the 1980s, Ingres was Oracle’s main competitor, and it later led to the development of Sybase, SQL, and PostgreSQL database technologies. Through his Berkeley connections, William had already gotten a contracting job with Ingres, and leveraged that into the NeXT porting contract, allowing them to beat Sybase and Oracle to market with the first relational database system on the NeXT. 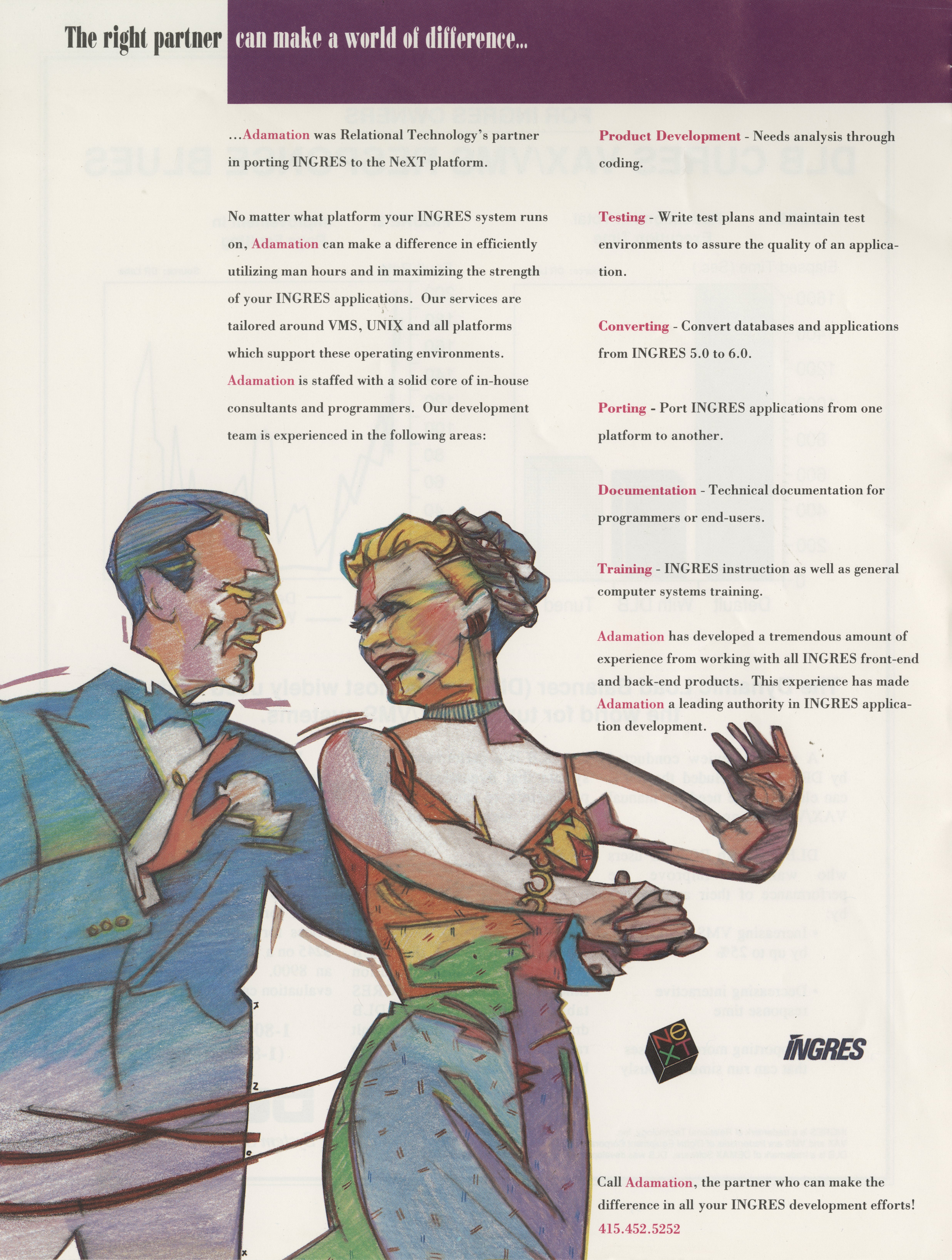 The Ingres database provided Adamation with a foundation upon which to build end-user applications for the NeXT: Who’s Calling?, a customer relations management package, What’s Happening?, a calendar application, and LiveWire, a local network live-chat app that was ahead of its time and was purchased by the CIA, among others. In addition, Adamation continued their contract development work, developing a custom solution for Alain Pinel, an upscale Silicon Valley realty, a key NeXT customer. Alain Pinel’s ambitious president wanted to put a computer on the desk of each of her realtors to increase their productivity and commissions. The custom software Adamation built for the company combined remote information retrieval with LiveWire instant messaging, predating the commercial internet. It was later copied and became the model for how realties run their operations today. Adamation also developed custom software for the William Morris talent agency, another key NeXT account. Stephan and William were doing mission-critical custom application development for NeXT as an enterprise platform years before NeXT itself pivoted to the strategy, allowing Adamation to survive when NeXT failed. 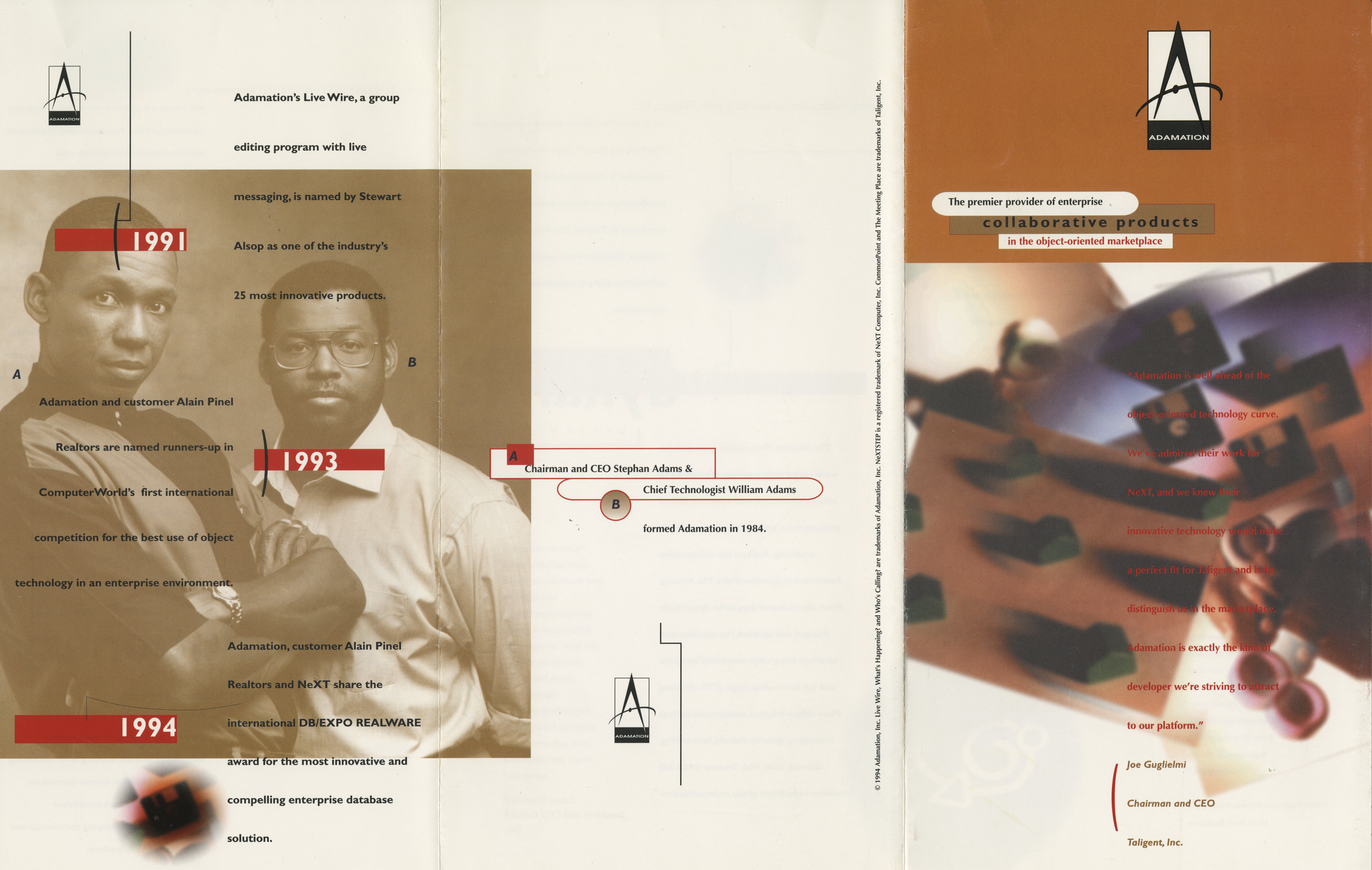 Black entrepreneurs are going nowhere without mentoring, absolutely nowhere. You can't do it without being mentored. It's just too hard.

And it's not about the skills, necessarily. It's about access—someone has to show you the path and bring you into the room and make you the introduction to whoever.

As NeXT struggled, Adamation pivoted to doing contract development for Taligent, a joint-Apple/IBM venture to produce a new object-oriented operating system. Taligent was also unsuccessful, however, and William eventually left to join former Apple executive Jean-Louis Gassée’s startup Be, Inc., which, like NeXT, was making a new, proprietary, graphical next generation computer system to compete with the Apple Macintosh. (Ultimately in late 2006 Be and NeXT would engage in a bakeoff to see which of their operating systems—and which company—would be purchased by Apple to replace the classic Mac OS. NeXT won, and Jobs and not Gassée returned to Apple. NeXTSTEP became the basis for Mac OS X and later iOS, and the rest is history. Read more about this, and what might have happened if NeXT had not won the bakeoff.) 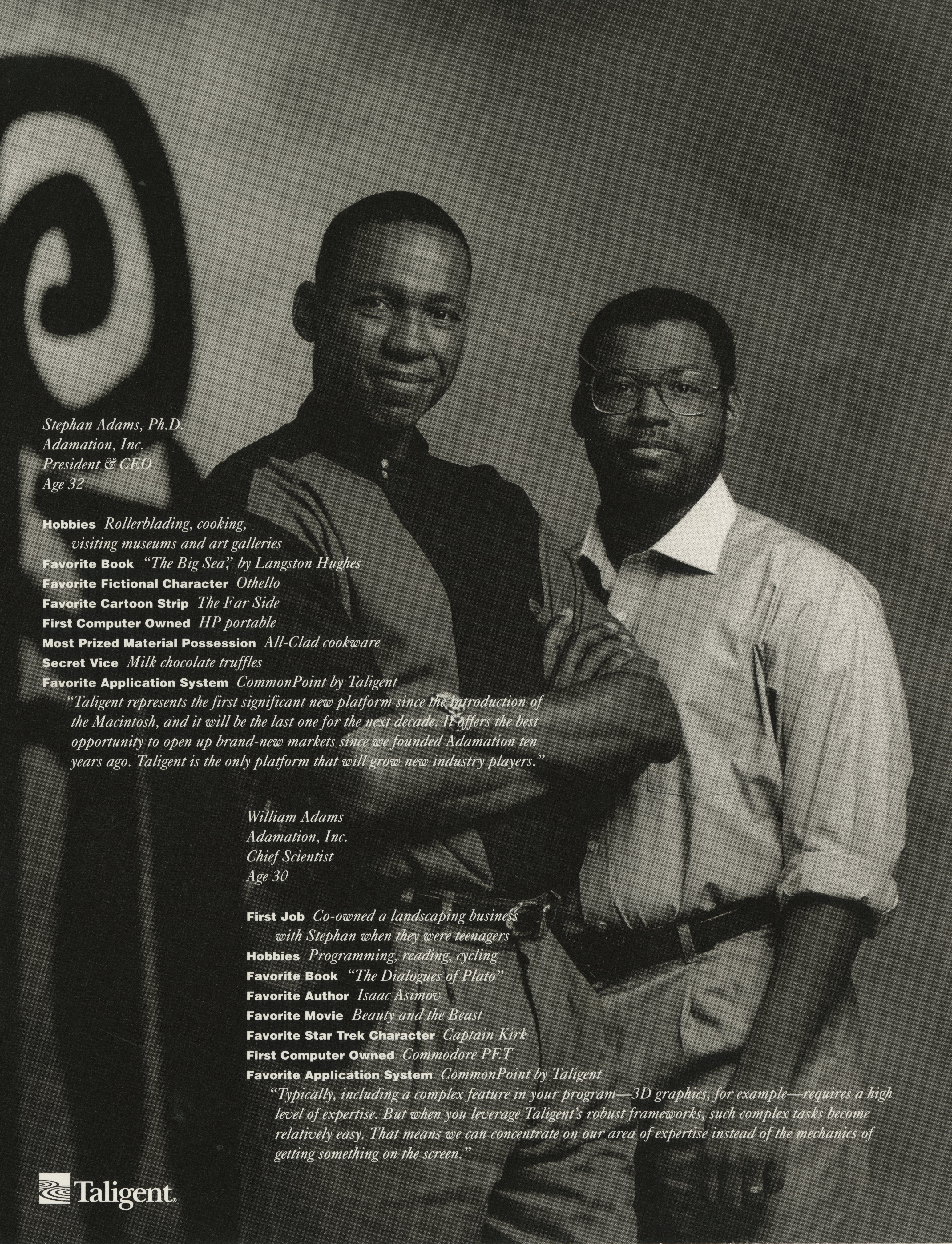 When William left, Stephan hired two new developers to create Personal Studio, an early video editing application for Gassée’s BeOS, and signed deals with various companies to sell rebranded and localized versions of its products in foreign countries. He also acquired venture capital funding from mentor Michael Fields, a Black technology executive-turned investor who had been president of Oracle USA. Fields helped Adams obtain a $12 million investment from HP. Unfortunately, after the dot.com crash of the early 2000s, HP cut its investment and the original incarnation of Adamation folded. 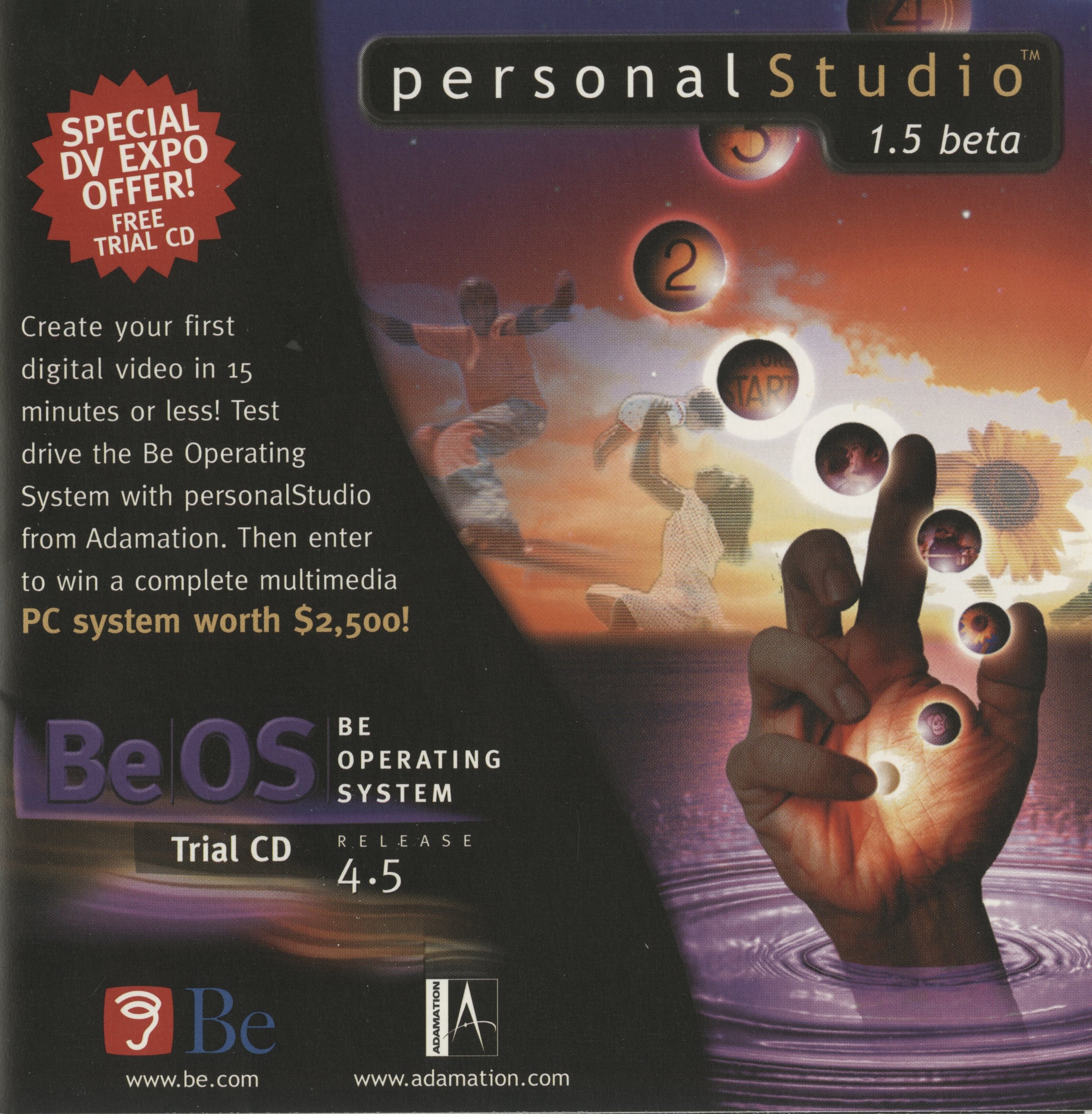 Being able to do LEAP, that was a career-limiting move for most people… I did it because it was challenging and, as I learned later, it was just really necessary and rewarding.

William, meanwhile, had left Be and taken a job at Microsoft, working initially in the XML team on the XSLT parser, and becoming a developer manager within a year, leading a team that eventually developed the SOAP toolkit and system.linq components of the .Net frameworks. After five years, William took a position in Engineering Excellence, moving to India to start the first incarnation of LEAP (Leap Engineering Acceleration Program), a five-week program to train new Indian engineering hires in the skills they needed to succeed at Microsoft and provide a community to improve retention rates.

After remarrying in India, William returned to the US during the 2008 financial crisis to work on the access control system for what would become Microsoft’s Azure cloud service, today Azure Active Directory (AAD). He worked on Linux for Azure just as Satya Nadella came on board as CEO. William then created the current incarnation of LEAP, whose purpose was to hire technical staff of diverse backgrounds from coding academies and train them with an onboard five-week program. This program was highly successful, and William joined the office of the CTO, Kevin Scott, as the first technical advisor, where he helped make the LEAP program a part of that office. William also helped to build a Microsoft engineering presence in Kenya and Nigeria. Today, he continues to help recruit, mentor, and train young hires, particularly those of minority backgrounds.

A few years after Adamation closed up shop, Stephan joined Michael Fields at KANA Software, an enterprise software company. He learned to do mergers and acquisitions, acquiring a company that today makes up the majority of KANA’s profits. He tried his hand at venture capital investing for a few years before relaunching Adamation in 2012 as a 3D printing company that sold 3D printed toys and other items to consumers. The lack of a market for 3D printed goods forced him to close in 2018. Today, Stephan is the CEO of a fiber optic company in the US Virgin Islands. His vision is to run an undersea cable connecting Africa to the US mainland through the Caribbean, which will help foster a technology sector in the islands.

On Race and Success in Silicon Valley

Stephan and William spoke insightfully about how race plays a factor in Silicon Valley. The brothers felt that they were able to succeed, in part, because they were so rare that they were not seen as threatening.

William and Stephan Adams share their perspective on race in Silicon Valley.

The new personal computing and software industry also needed good talent wherever it could be found and had not been around long enough to develop hardened biases. Jumping in on the ground floor of new platforms like NeXT, where there were low barriers to entry, helped the brothers get a foot in the door, as well as access to the 5% elite of Silicon Valley. Networking at Berkeley and finding mentors and supporters, both Black and White, was a key component of their success in making the most of opportunities when they arose.

Nevertheless, the brothers note that, despite their success, like other Black people in America, they are subject to systemic racism that could even endanger their lives. Today, both brothers are paying it forward to the next generation of Black engineers and entrepreneurs, William with his LEAP program at Microsoft, and Stephan with his work to connect Africa to the US through fiber optic networks.