By Sungmin Park and Felipe Silveira 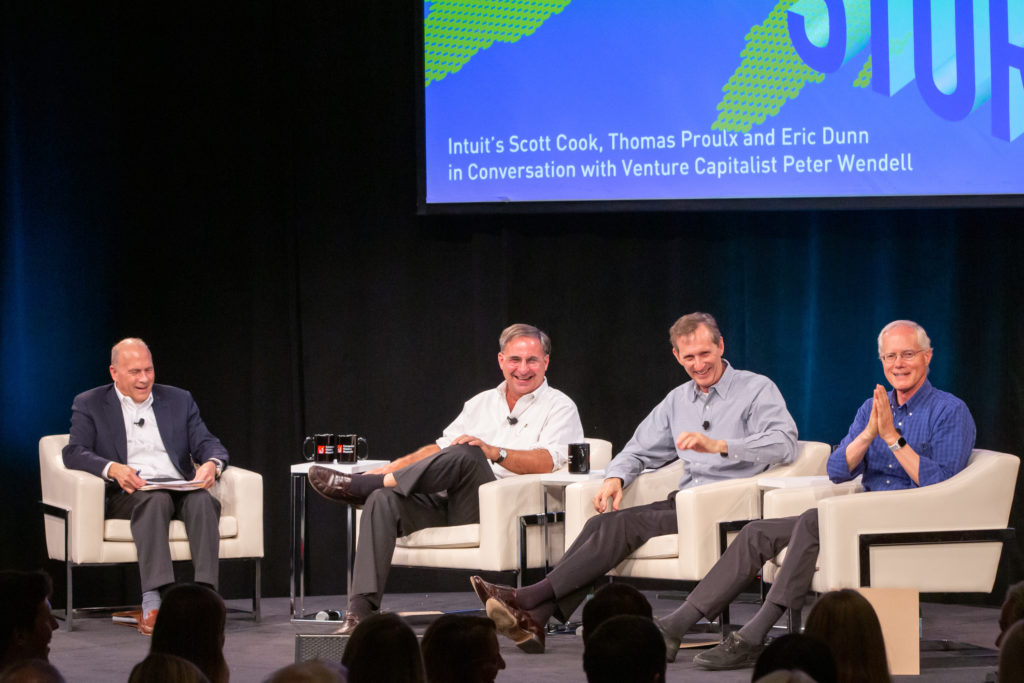 How does a tech company founded in the era of floppy disks and hand-packaged software not only survive but thrive as the market leader for 36 years? On July 29, cofounders Scott Cook and Tom Proulx and early CFO Eric Dunn, now CEO of Quicken, reunited at CHM to share insights into the principles and key decisions that keep Intuit at the leading edge of innovation.

Intuit is a financial software company with a current market cap of over $66 billion, 50 million customers around the globe, and over 8,000 employees who vote it among the top 100 places to work. Its personal and business accounting products Quicken (now a spinoff), QuickBooks, Mint, and TurboTax have become the market standard. Moderated by venture capitalist Peter Wendell of Sierra Ventures, the discussion explored the company’s early days and the challenges faced by the entrepreneurs while scaling up.

A quintessential Silicon Valley story, Intuit began much like any other startup. A handful of ambitious individuals set up camp in an unfurnished basement in 1983 with the whole world against them. They faced ambiguity, self-doubt, outright rejection, bankruptcy, and angry customers yet ended up as leaders of a revolution in financial software that continues to this day. But even after massive success and growth, Intuit doesn’t aim to be just an established, monolithic corporation. Instead, it reinvents itself constantly, embracing uncertainty and questioning its own dominance. This proactive spirit helped Intuit transition successfully to the internet age, when many other companies, content with their progress, were wiped out.

Cofounder Scott Cook is famous for his ability to understand customer behavior. Before deciding to pursue his idea for a company, he picked up a phone book and asked his Palo Alto neighbors about their bookkeeping issues. He used a stopwatch to meticulously measure people’s speeds when using software and based his judgments on the struggles of his customers. When every venture capitalist he contacted turned him down, Scott remained steadfast in his belief that this user research and data spelled out success for his vision. While investors lacked faith, Scott and Tom, a programmer just out of Stanford, chose to believe in the consumer testing that revealed their product was superior to every other alternative. During a time when “consumer software” was notoriously difficult for consumers to navigate, with an overwhelming number of options, Scott was a pioneer in imagining software so easy and fast that people could not imagine going back to the old way of doing things.

Faith in the product didn’t pay the bills, however. Without investment from venture capital, they had to rely on savings and money from Scott’s parents. When that ran out, they returned the rented furniture, used discarded stationery, and did what they could to survive. Scott later found the checkbook from that year and noted that it had no transactions.

Despite the company’s travails, Eric Dunn was taken with the vision and the team and joined as chief financial officer, rolling up his sleeves to code along with Tom. Years later, he also served as CEO. When asked to pick one word of advice to give to aspiring entrepreneurs, Eric chose “Listen.”

Externally, listening to customers is one of the best ways to gather relevant information and data that can send your business in the right direction. Eric explains how this mantra drove Intuit’s product development, as rigorous user testing allowed the company to develop a personal relationship with their clients and gauge product satisfaction.

Internally, Eric believes that listening is important for the people that tend to do most of the talking. While leaders are often natural performers, listening creates a platform of open dialogue throughout the entire company. By acknowledging what your coworkers and employees have to say, anticipating problems becomes easier and goals become clearer. CEO Brad Smith put a notice outside his office advertising his open door policy, modeling Intuit’s culture of listening.

Often when a company grows large and successful, it loses its ability to innovate. Strict adherence to established ways can hinder creativity and risk-taking in an organization. Intuit challenges this fate by consciously encouraging rapid experimentation and design-centric thinking that seeks to solve real issues, not just appease executives. Scott and Tom and Eric emphasize company culture as a key factor in its longevity and success.

So, how exactly does a tech company thrive at the top of the market for 36 years? It starts with the leaders. From the beginning, Scott, Tom, and Eric built the scaffolding to support an environment of self-improvement and experimentation. Each member brought different, indispensable strengths to the company. Scott critiqued himself to the point of voluntarily relinquishing his post as CEO for the betterment of the company. Tom, as a programmer and cofounder, was relentless and persistent in meeting his goals. Eric realized the true value of his team after they handled his mistakes with understanding and compassion. Scott’s closing words of advice seemed to resonate strongly with the CHM audience:

“The most important thing to improve is yourself. If you’re not constantly focused on understanding how you’re doing honestly, if you’re not critiquing yourself, you’re not keeping up your end of the bargain.”

2019 Exponential Center university interns Sungmin Park and Felipe Silveira contributed to essential research and programming efforts at CHM during their 10-week summer internship. Sungmin recently graduated from University of California, Davis with a degree in cognitive science and Felipe continues his undergraduate work in global studies at the University of California, Santa Barbara.