Video games take us on brave new adventures. They offer imaginary worlds and challenges that the real world cannot. Looking back, we see that even vintage games more than made up for their lack of raw computing horsepower with their charm, uniqueness, and often groundbreaking visuals. Fast forwarding to 2020, this holiday season–while we stay close to home and visit with family on Zoom–video games can provide the escape we're all craving.

If you are a gamer, or you have one on your gift list, odds are that one of the latest video games or consoles are near the top. And, while this year has been disappointing and difficult in so many ways, some of the hottest electronic consoles ever developed are now available: Sony’s PlayStation 5, Microsoft’s Xbox Series X, and the Nvidia RTX 30 series GPU (I’ll explain that later). Let’s take a closer look at today’s gaming technology and gaming industry.

By 2023, it is estimated that at least one in three people, globally, will be a video gamer.

Gaming has evolved massively since the early days of black and white cathode ray tube displays and primitive consoles and games, beginning roughly in the 1970s. It is now a huge industry. In fact, 2020’s global games market is expected to generate revenues of USD $159.3 billion, a healthy year-on-year growth of +9.3%, and is expected to reach USD $256.97 billion by 2025. Astonishingly, the video game market is now even bigger than the Hollywood motion picture industry. 2020 was clearly a bad year for Hollywood, mostly due to COVID, but even in 2019, the industry saw box office revenues just shy of $42 billion. Compare that with a single blockbuster video game, Grand Theft Auto V, which in 2013 earned $1B in the first three days alone, making it the fastest-selling entertainment product in history. Today there are about 2 ½ billion gamers world-wide, and by 2023 it is estimated that at least one in three people, globally, will be a video gamer.

Today’s consoles are engineering marvels and rival the world’s fastest supercomputers of just a decade or two ago. One measure of computing speed is a FLOP, which stands for “floating-point operation per second,” and is a benchmark for computing performance. Just like horsepower may be used to indicate how powerful your car’s engine is, FLOPs indicate how powerful a computer is.

The world's most powerful supercomputer (November 2000 – November 2001) was the IBM ASCII White. Its peak performance of 12.3 TFLOPS (comparable to today’s video game consoles) could be yours for only USD $110 million (equivalent to $163 million in 2019). This behemoth was housed in over two hundred cabinets, covered a space the size of two basketball courts, and weighed 106 tons. Unlike a gaming console, it would not have fit under your TV! By comparison, the latest Sony PlayStation 5, is capable of processing at just over 10 TFLOPs, and the new Xbox Series X comes in around 12 TFLOPS. They can be yours for significantly less than a supercomputer, and fortunately do fit under your television.

In addition to speed, at the heart of any modern-day gaming console is a powerful GPU (Graphic Processing Unit), and it is this specialized device that determines how good your games look. Generally speaking, the more powerful the GPU, the more impressive the graphics. The GPU essentially defines what you see on your screen. It handles the complex math required to render high-quality graphics. Performance of these GPUs is also measured in FLOPS, TFLOPS to be exact. The “T” stands for "trillion," so that 10 TFLOPs PlayStation console is actually performing more than ten trillion mathematical calculations per second! All that computation manifests itself as the high-quality graphics you see on your screen.

This graphic shows the evolution of the game’s protagonist, the “Doomguy” from its first release in 1993 to today. The improvement in graphics is staggering, and in another generation or two, characters and visuals in games will rival reality. Doom helped popularize the first-person shooter format in which players see through a character’s eyes, sparking controversy about violence in video games. It gained a large following, with more than 10 million units in the series sold, and the latest release, Doom Eternal, came out this year.

Video game graphics have clearly come a long way from the simplistic visuals of games like Pong and other games of the 1970s. 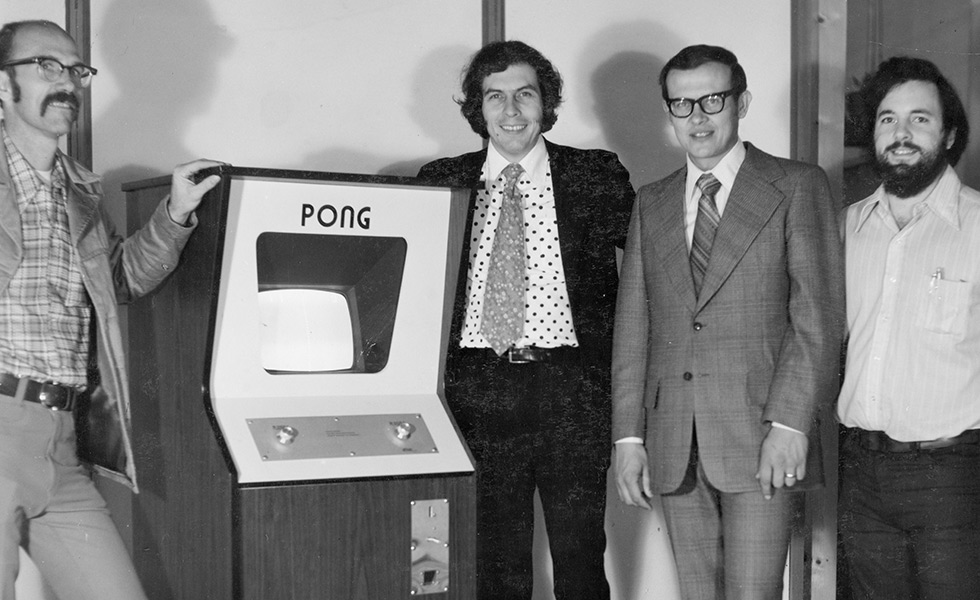 Atari founders Ted Dabney and Nolan Bushnell with Fred Marincic and Al Alcorn, 1972. Pong, while often thought of as the first commercial video game, was actually inspired by a table tennis game released on the Odyssey a year earlier. © Alcorn, Allan

Conversely, many techniques of gameplay pioneered by early computer games are still in use today. A great example is the classic game Pac-Man, released in 1980. While Pac-Man’s graphics are simple by today’s standards, it was a deceptively challenging game disguised as a simple maze game. It is considered one of the most influential games created and incorporated techniques still employed by many popular games today, such as a central protagonist, cut scenes (brief interludes between game play), and even artificial intelligence (AI) that reacted to the player’s actions. These ideas influenced generations of later game developers. 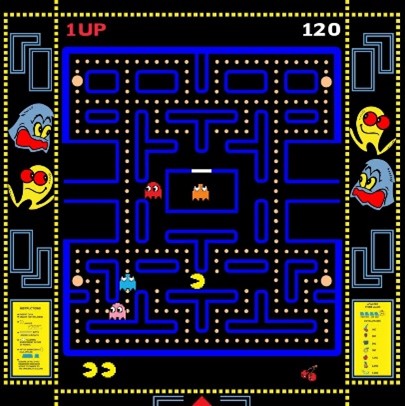 The playing field for Namco's Pac-Man. Pac-Man players controlled a puck-like character that had to gobble up dots while being chased by ghosts named Blinky, Pinky, Inky, and Clyde. © Namco

Another debt we owe to early computer game designers is the multi-game console. Prior to game consoles with interchangeable games, video games were single-purpose, such as the handheld devices like Head to Head Football or Merlin, a memory game. They often contained a single game and lost their playability quickly. This changed in the 1970s, thanks to home video game pioneer Jerry Lawson. He helped develop the first cartridge-based home video game console system known as the Fairchild Channel F, the “F” standing for "fun." His contribution, allowing for quick swapping in and out of different games, played a significant role in the attractiveness of video game consoles to consumers and has become the standard for every modern game console. Remarkably, Lawson was the only African American member of Silicon Valley's famed Homebrew Computer Club in the 1970s, where early computer programs were freely shared.

Over the last five decades, video games have become a welcome distraction for billions of people. While the power of today’s video game consoles rival the supercomputers of yesterday, the games’ longevity are a testament that it’s about how the game makes you feel, not what’s under the hood. There's something nostalgic, and perhaps even therapeutic, about playing a simple game gobbling up dots while out-maneuvering ghosts called Inky, Blinky, Pinky, and Clyde.

Whether you dream of video games past, present, or future this holiday season, they will always have a special place in our hearts.

Dave Evans oversees CHM’s information technology. This includes existing and future technologies in areas such as networking, server and cloud infrastructure, desktop and employee productivity solutions and IT data and security solutions. Previously a Cisco veteran of 24 years and a startup entrepreneur, Evans has a rich history and technical career in Silicon Valley.