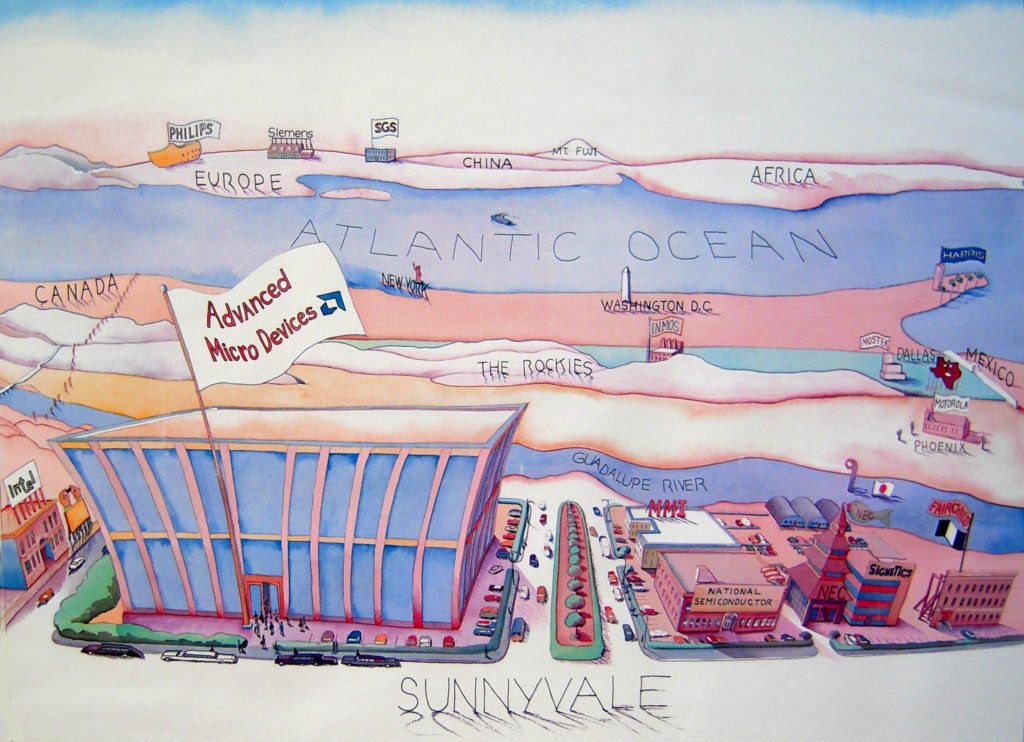 AMD compares itself with its competitors in this 1983 parody of The New Yorker magazine's “View of the World from 9th Avenue.”

Bob Noyce said that it took [Intel] five minutes to raise $5 million - well, it took me five million minutes to raise five dollars . . . But I was dogged about it. I knew I had a story. I knew we could make money.1

On May 1, 2019, Advanced Micro Devices (AMD) is set to celebrate its 50th anniversary as an important supplier of advanced semiconductor devices. AMD's survival as the only Silicon Valley computer chip manufacturer other than Intel to reach its golden anniversary as an independent company is an extraordinary achievement for an underdog considered least likely to succeed by industry pundits in the 1970s.

Today AMD is a multinational company based in Santa Clara, California, and Austin, Texas, that develops computer processors and related devices for business and consumer markets. Fiscal 2018 revenues were $6.48 billion.

The story of the early years of a brash, under-funded startup led by the charismatic and flamboyant founder W. J. “Jerry” Sanders III, its legendary battles with Intel, and multiple starring roles as the industry's come-back kid are well documented in the press and in first-person accounts listed in the resources at the end of this article. Veteran Silicon Valley chronicler Michael S. Malone describes it as “one of the great tours-de-force in business, nearly on a level with Lee Iacocca a few years later at Chrysler.”

Early on AMD engaged Keye/Donna/Pearlstein, later to become one of the most creative advertising firms in Los Angeles, to create a media campaign to complement its aggressive sales and marketing persona. The examples of print and promotional programs from the 1970s and 80s reproduced here display AMD's confident sense of self combined with often humorous but informative content and always a dash of the “charm, swagger and wit [of the] bigger-than-life Jerry Sanders.” 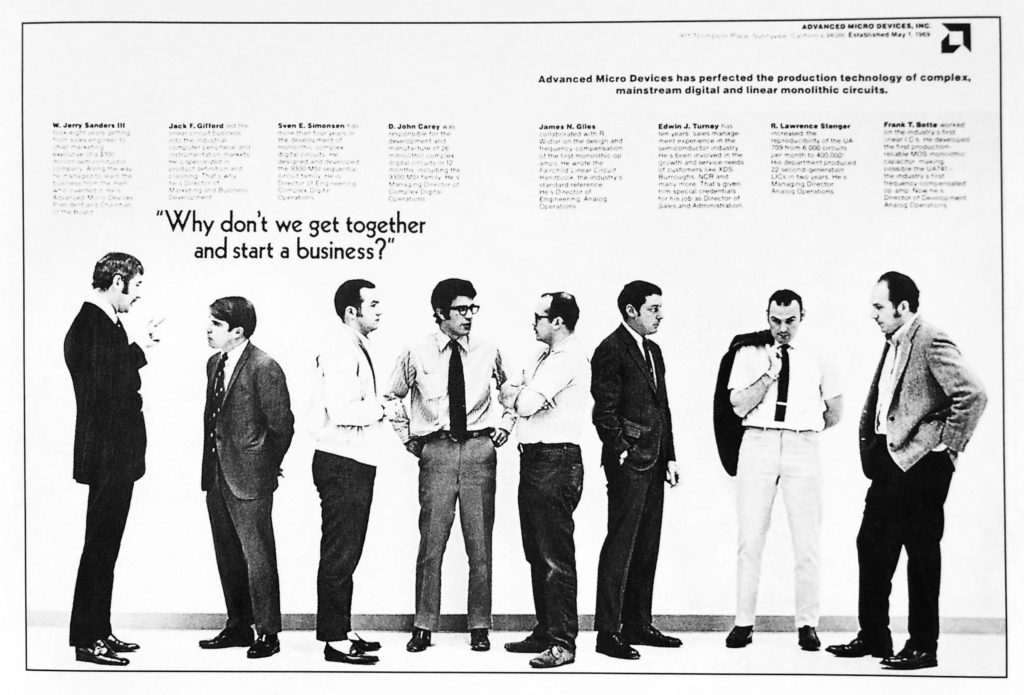 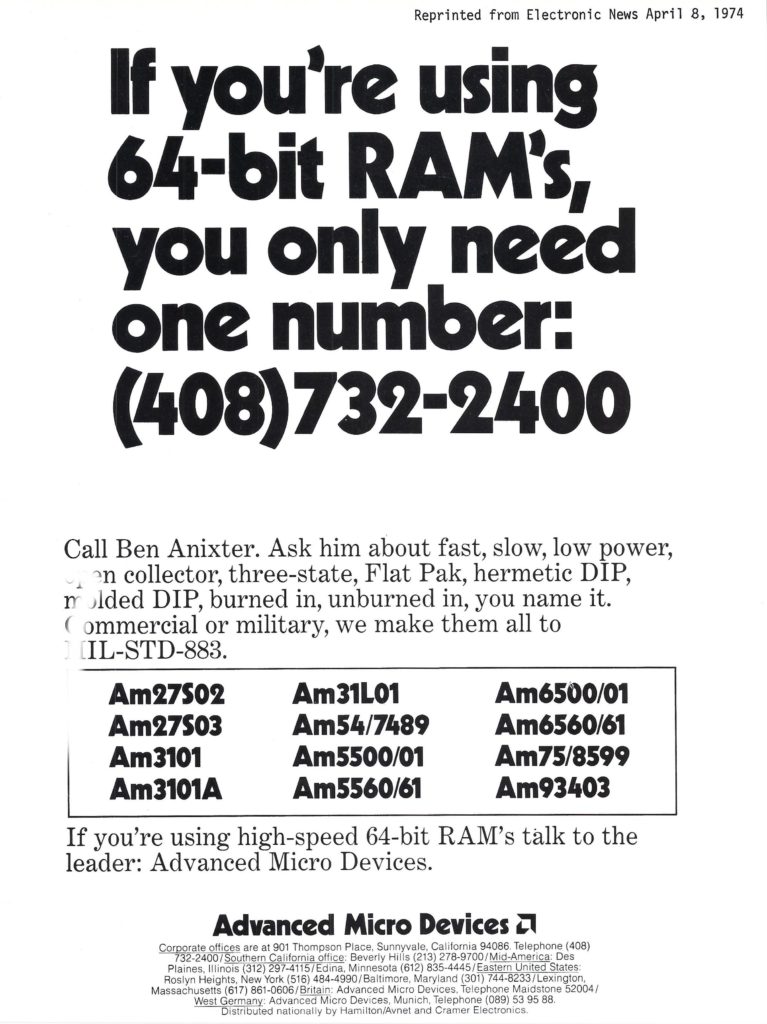 The 64-bit RAM was a popular circuit offered by Intel, Fairchild, Texas Instruments (TI), and others but often in short supply. AMD capitalized on this with one of its earliest memory offerings. 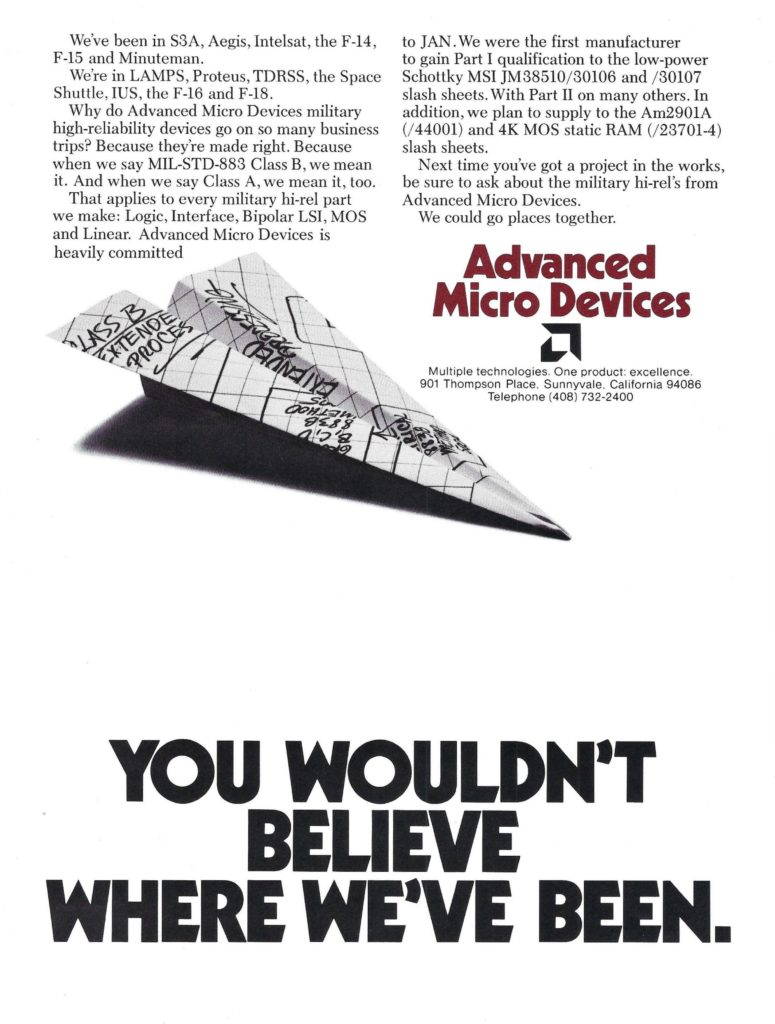 All AMD commercial products were manufactured to stringent specifications demanded by high-reliability aerospace applications. The slogan “MIL-STD-883 for free” proved an important sales tool in building customer confidence in a new, unproven supplier. 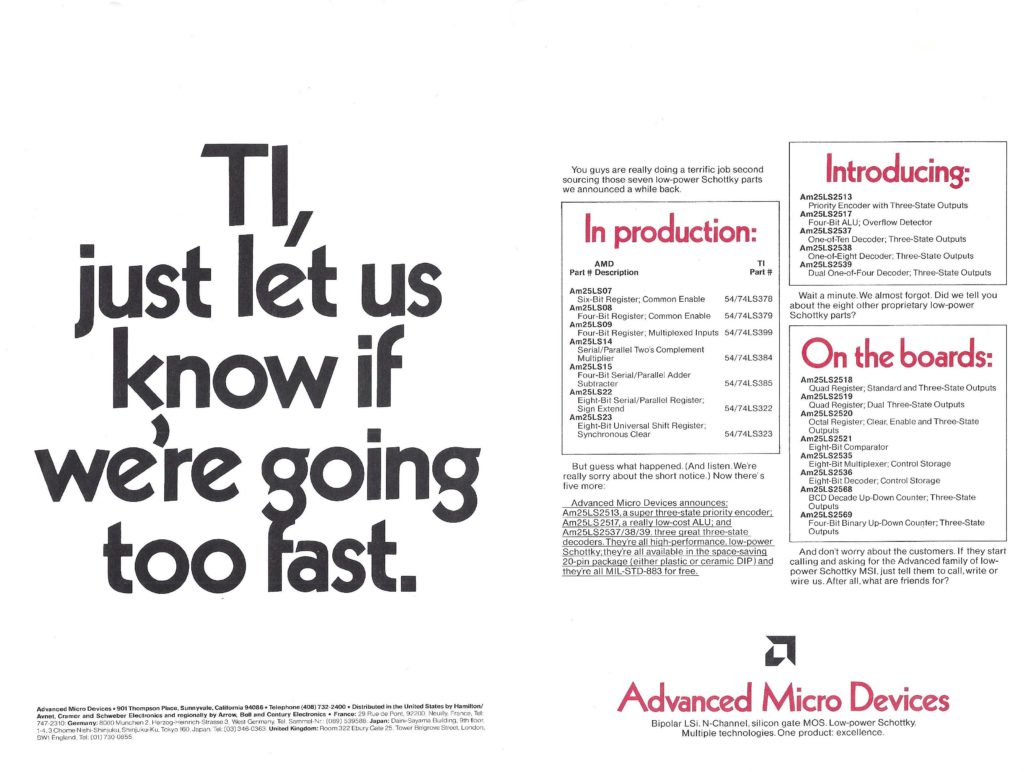 As AMD gained market share it began introducing new designs before its competitors could bring them to market. The company became one of the largest suppliers of complex bipolar logic building blocks in the 1980s. 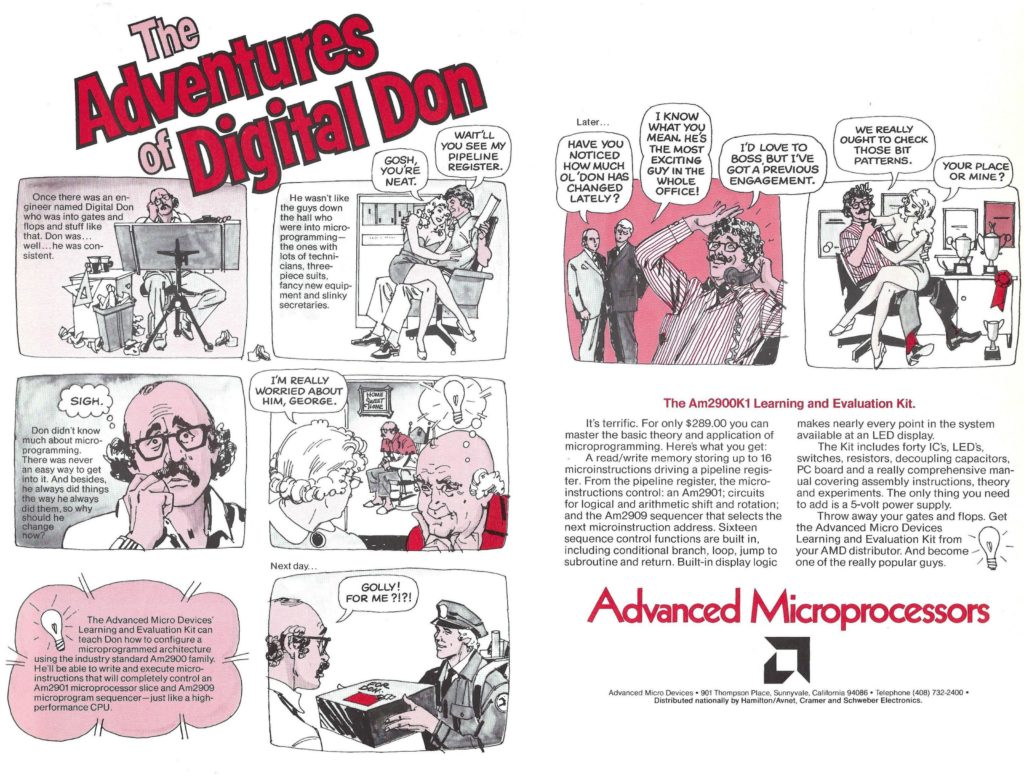 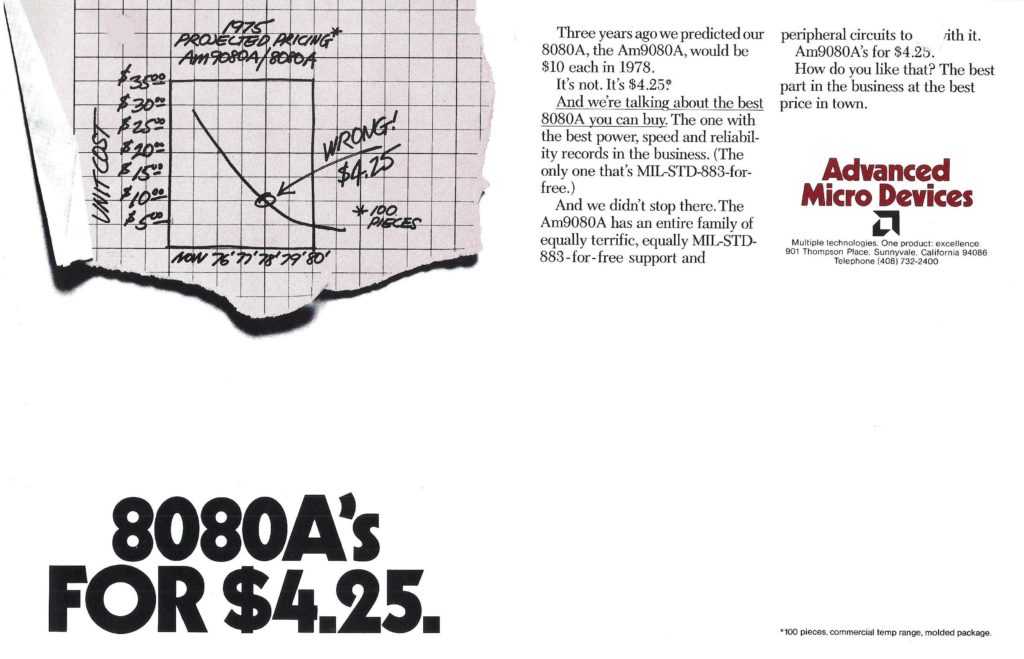 At one-point AMD was selling more units of its improved version of the Intel 8080 microprocessor than the original supplier. 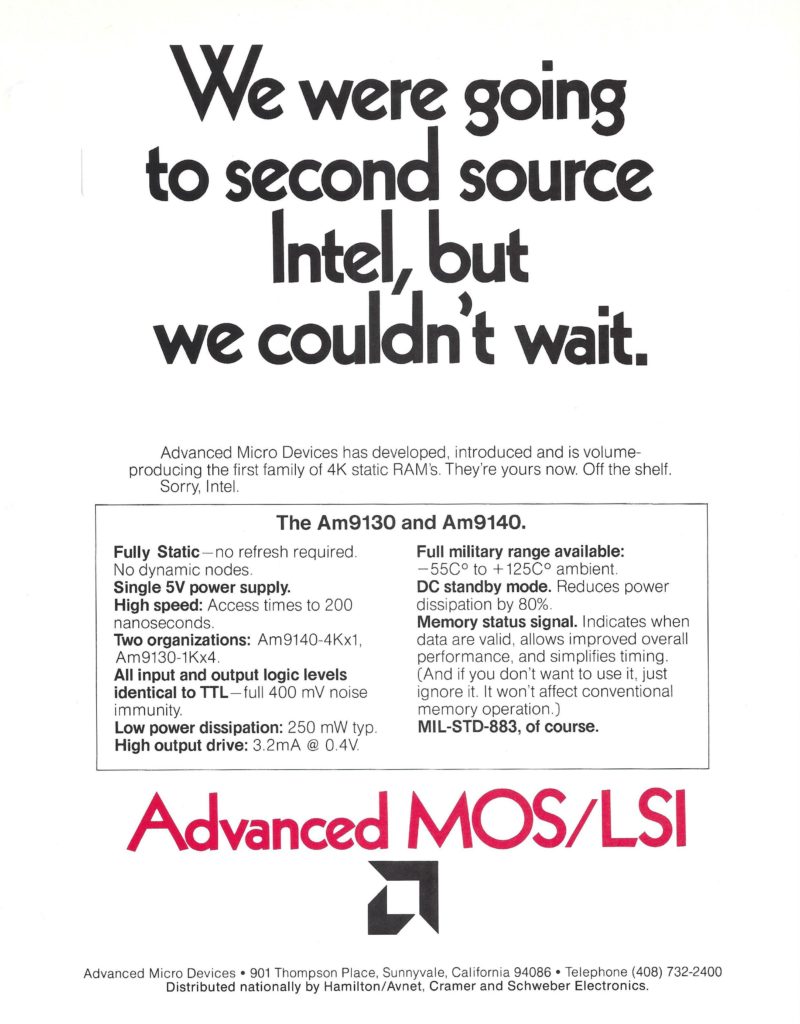 Many AMD ads gained attention by poking fun at the competition. 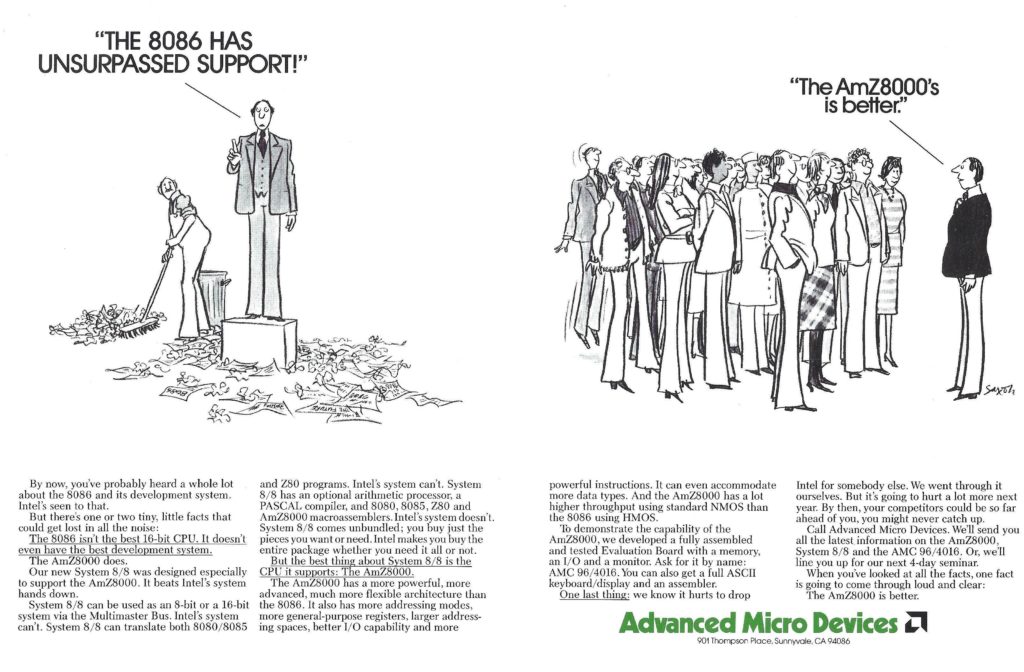 Lacking access to the next generation Intel 8086 architecture, in 1978 AMD signed an agreement with Zilog to second source the Z8000 processor. 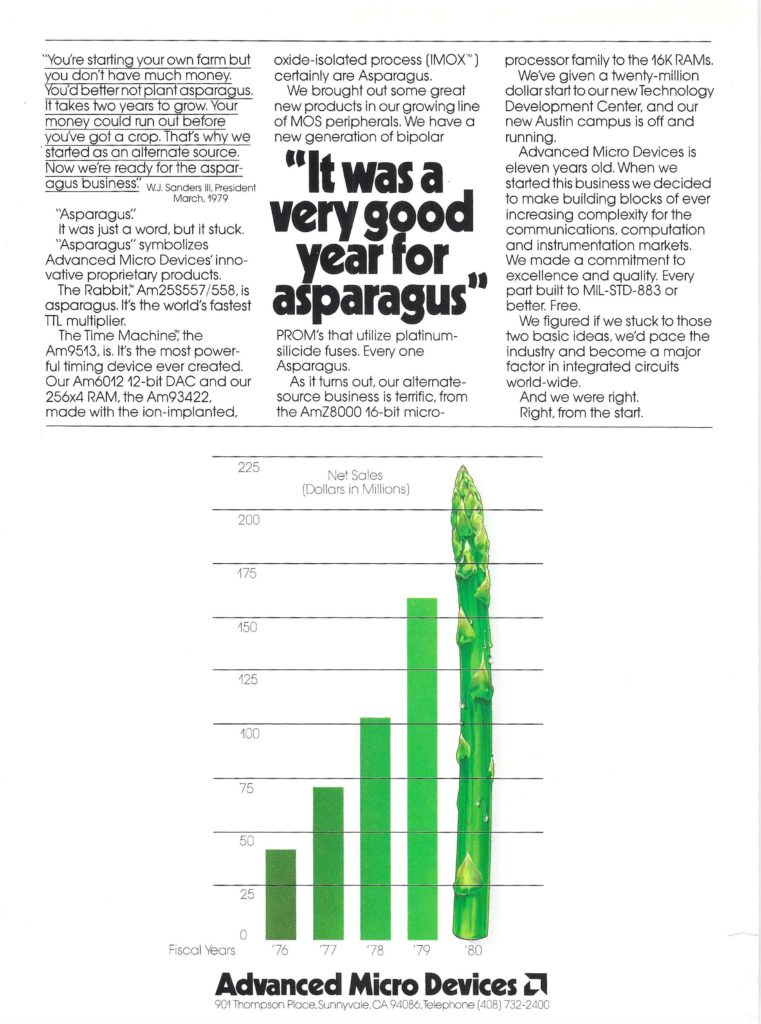 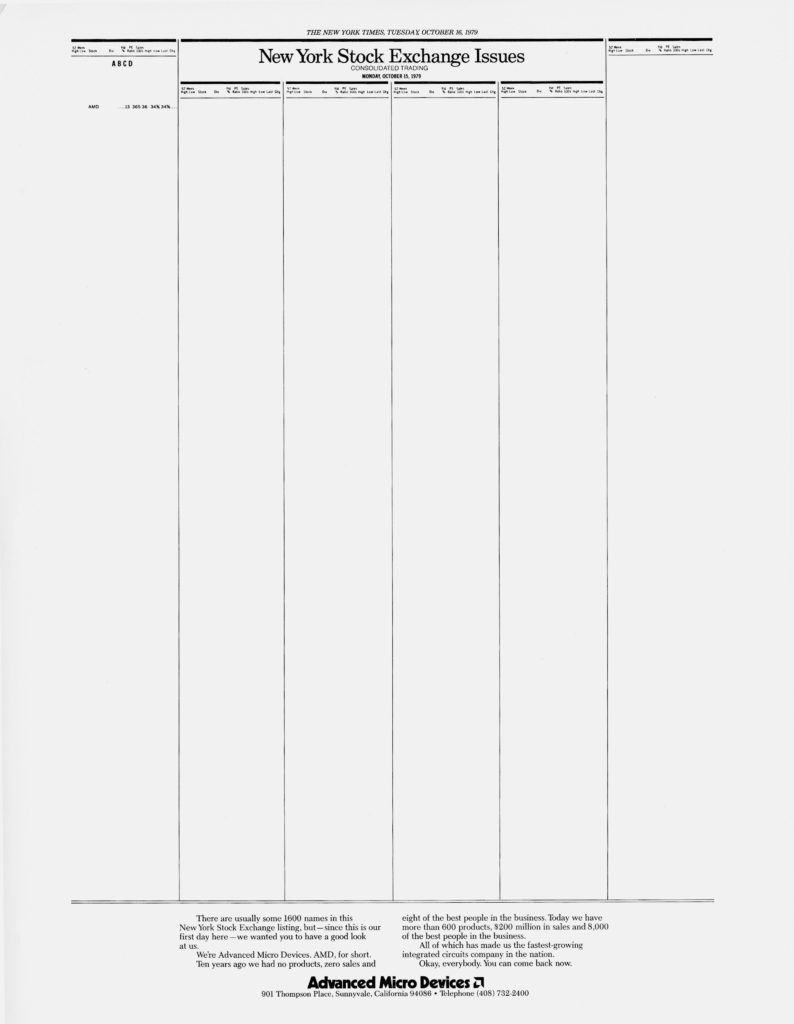 October 15, 1979: AMD is listed on the NYSE. This one-page ad in the New York Times omitted all other listings from the stock price page. 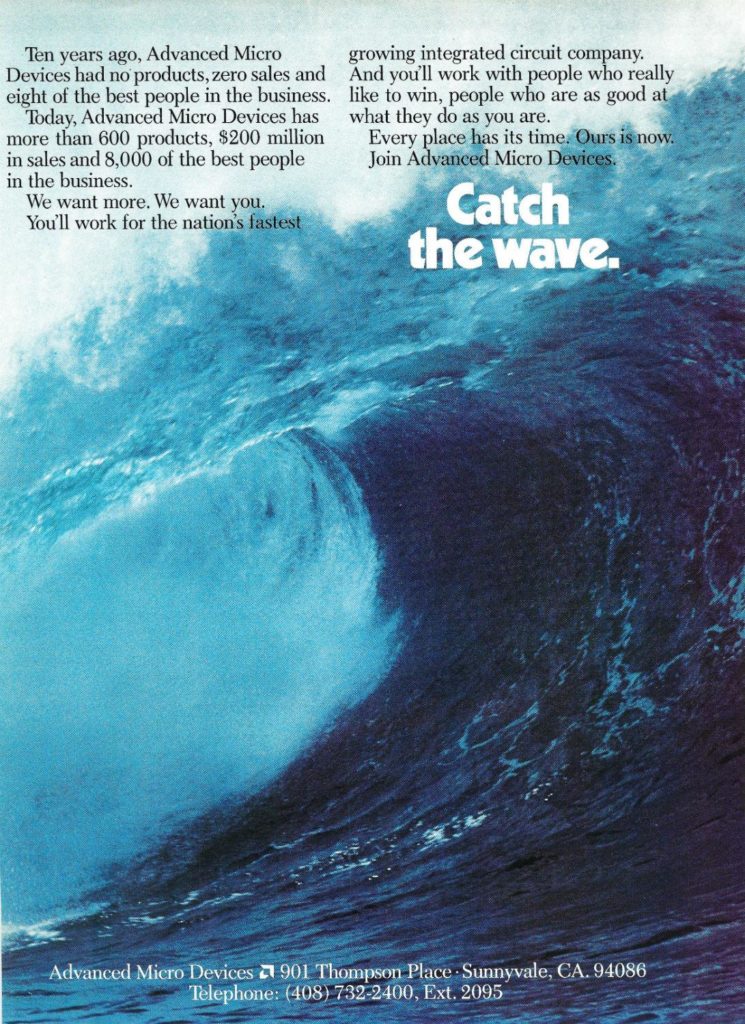 The “Catch the Wave” recruiting campaign that included a TV ad of a man surfboarding in a business suit captured broad public attention and vaulted AMD to celebrity status from Wall Street to Main Street. 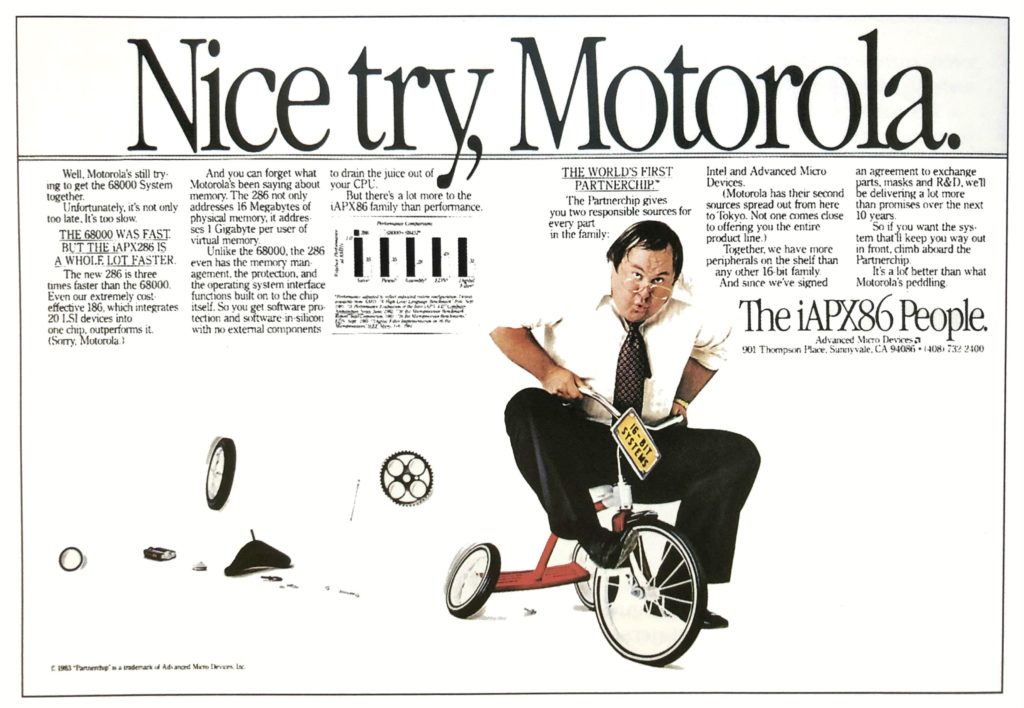 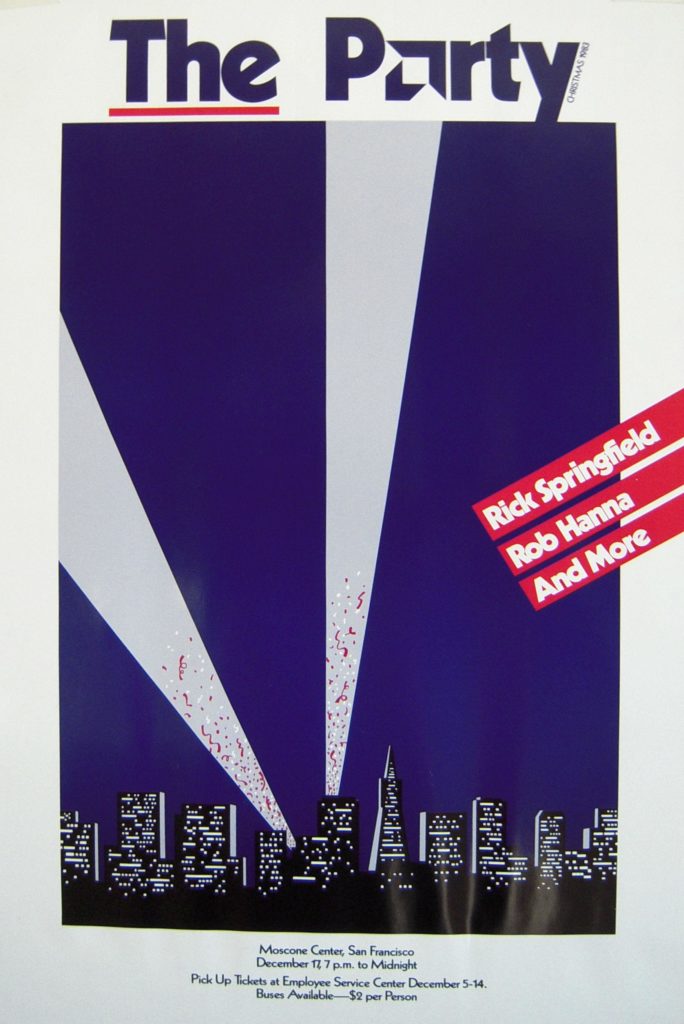 In 1983 the annual AMD Christmas party was held in to San Francisco's largest convention space, the Moscone Center. These extravaganzas attracted so much TV and press coverage that their cost of half a million dollars or more was justified on the basis of PR impact. 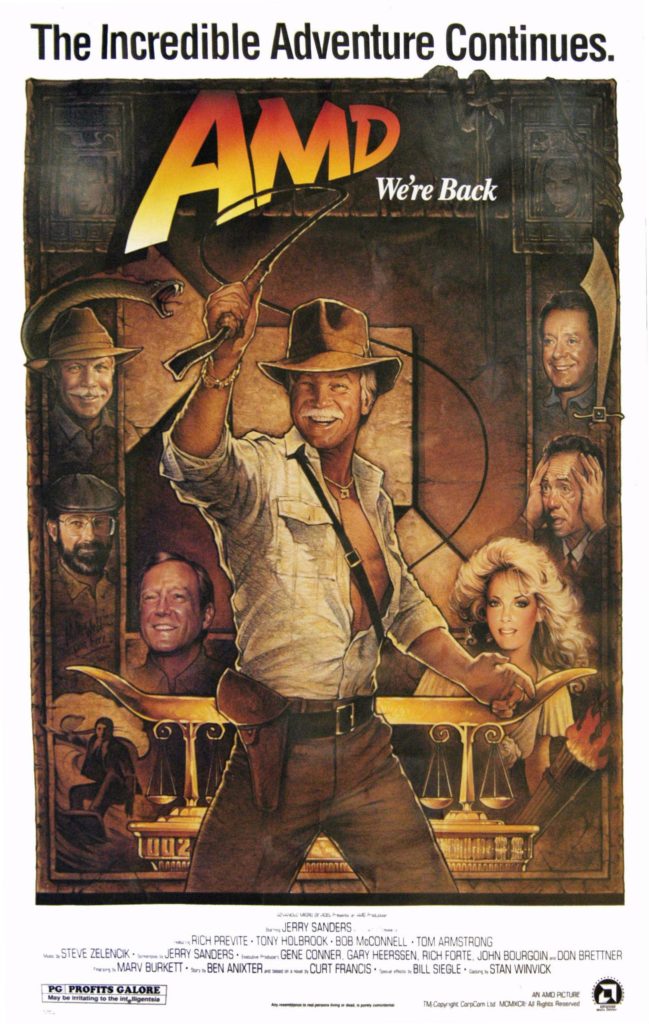 Featuring “Illinois Jerry” and his cast of characters, “The Incredible Adventure Continues” poster celebrated AMD's return to growth with new and improved products (1992).

In full disclosure: Beginning in 1975, the author spent 12 of the most rewarding years of his professional life at AMD in roles from marketing manager to vice president of business development. Thank you, Jerry Sanders for creating an extraordinary place to work and grow. To Steve Zelencik for his many years of mentoring and support and also for donating his collection of AMD advertisements, several of which are used in this article, and other documents to the Computer History Museum (CHM). And to John Springer, keeper of the FLAMES website and archive for Former Loyal Advanced Micro Employees.