Art always tells us something about the times in which it was created. Take Andy Warhol’s Campbell’s soup cans for example, which caricature the effects of mass consumer taste on art. Or sculptor and architect Gian Lorenzo Bernini’s Apollo and Daphne, which shows two human figures carved in marble in a breathtaking display of movement and form so typical of the high baroque period. The materials they used, the techniques the employed, and the patronage of their art all tell us something about the times during which these artists worked. The Computer History Museum has some very unique sculptures in its permanent collection and they too tell us a lot about the times of their creators, in this case the early mainframe computer era. These sculptures, known as the “Honeywell Animals,” are part of a collection of over 100 animal sculptures commissioned by computer maker Honeywell as part of a long-term advertising campaign. Honeywell’s campaign lasted from 1964 to 1978 and each ad featured a sculpture with a clever tag line that promoted Honeywell computers. 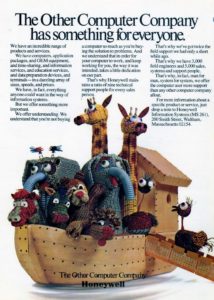 The first sculpture was a simple pterodactyl-appearing bird escaping from a cage. The headline proclaimed: “You’re free. Honeywell’s ‘Liberator’ lets you switch to the H-200 without re-programming.” In this case, Honeywell was promoting its H-200 mainframe computer running ‘Liberator’ software—which let it run IBM mainframe software—Honeywell’s main competitor—without modification, a huge selling point. Other animals included a bull, a fish, frogs, a horse, a kangaroo, a cat, an owl, a puppy, a tiger and a roadrunner among many others. Most of the animals were either sculpted from Styrofoam or formed with a wire mesh, with components added to form the mosaic pattern of the animal.

In keeping with the times, these sculptures, made by half a dozen sculptors in the Boston area, are each unique and were made using electronic components of the time. If you have electronics experience, you will smile at the clever ways in which common components like capacitors, resistors, diodes, and transistors are arranged and formed into animal parts. Once the ad campaign was over, Honeywell gave away the sculptures to employees and important customers. Fortunately, Morris Dettman, the Honeywell visionary who sponsored the campaign, arranged for a few of these sculptures to come to the Museum. CHM now has a bison, a grasshopper, a fox and a variety of chess pieces in its collection.

The whereabouts of the remaining Honeywell animals is unknown. CHM is actively seeking these items so if you’ve seen or heard of one, please do let us know.

UPDATE March 14, 2014: We are delighted to report that CHM has acquired another Honeywell animal! It is of a rabbit and was made by Ralph Moxcey, creator of the Honeywell animal scultpure concept while at BBDO and now a sculptor in Maine. Ralph told us about his friend, Dick Pantano, who had the rabbit safely stored in his house… for fifty years! The rabbit joins its other friends in CHM’s permanent collection.

UPDATE: July 3, 2014: Just about the time we received the Honeywell rabbit described in the above update, we learned that the Siamese Cat sculpture seen above was being lovingly kept by someone with a unique connection to the Honeywell campaign. Amy Ancel (née Davis) was just a young girl in 1965 when Malcolm MacDougall, vice president and creative director of ad agency BBDO, wrote her in reply to a suggestion she made about making a cat sculpture for BBDO’s Honeywell animal advertising campaign–which was then in its infant stages. The letter is delightful, funny, respectful, and encouraging and informs Amy that the agency has decided to build a Siamese cat sculpture, as she suggested.

About eight months later, the cat sculpture, now named “Amy” in her honor, is born. Its first appearance was in the Wall Street Journal with the headline, “Picking a computer is no time for pussyfooting.” A last letter, dated June 26, 1968, confirms that Amy (the person) has received Amy (the cat) at her home, just as Malcolm MacDougall promised three years earlier.

Since that time, this unique and popular sculpture (it ranked first out of 15 different animal ads), has been well looked after in Ancel’s home in Westport, Connecticut. She kindly got in touch with us after hearing that we have been collecting Honeywell animals. After further discussions about its provenance and condition, the Museum acquired the Amy the Cat sculpture for its permanent collection. We are especially delighted that this remarkable object has such a touching personal story associated with it and we express our great gratitude to Amy Davis Ancel for parting with a dear old friend. The good news is that now Amy the Cat and her story will be preserved in a caring and professional environment for the benefit of all.