This year, the Computer History Museum honors Harry Huskey as a CHM Fellow. Fellows are unique individuals who have made a major difference to computing and to the world around them. Huskey was born in 1916 in Bryson, North Carolina, when the Battle of the Somme was raging and Pancho Villa was on the lam. He is from that first generation of computing pioneers who worked at the dawn of the computer age in the mid-1940s. In this first generation, people were asking what an electronic calculating machine might do and building real working systems themselves to explore that question.

There were no computer engineers or computer scientists—that was decades in the future. “Computer people” in the first generation were often physicists or mathematicians as well as engineers. All were new to this exciting new field of electronic digital computing. Huskey, a mathematician, was a key participant in this early period, working with several of the most important machines and people in the history of computing.

Huskey received his bachelor’s degree in mathematics and physics at the University of Idaho (1937) and a masters and doctorate (1943) in mathematics from Ohio State University. For his doctorate, Huskey worked under professor Tibor Rado, who, in WW I, had escaped a Siberian military prison, hijacked a train from Siberia to Vladivostok, and somehow made it back to his native Hungary.

Huskey’s first job was teaching mathematics as an assistant professor at the University of Pennsylvania, mainly to U.S. Navy students during WW II. While there, he applied for classified work at Penn’s Moore School of Engineering. Without knowing the specific details of the work, Huskey soon learned that he would be a team member on the legendary ENIAC project—the first large-scale electronic computer (1946). Huskey recalls:

"] I heard that there were projects at the electrical engineering department of the Moore School at the university, and I applied for part time work. Since their work was classified they couldn’t tell me what they were doing, so I had no idea what I would be doing. When finally clearance came, I was shown the ENIAC and I’ve worked in computers ever since. 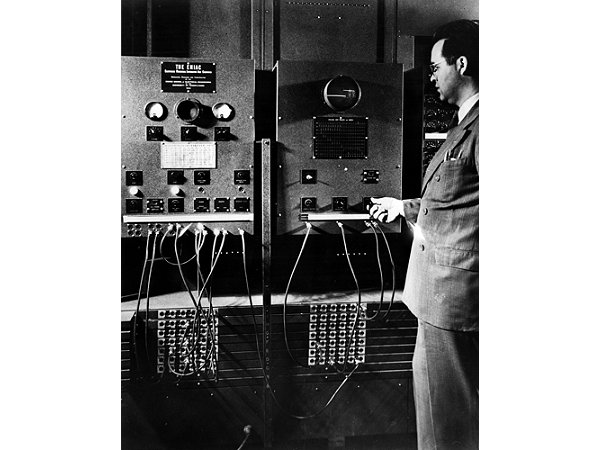 Huskey in front of the ENIAC main control panel.

On the project, Huskey’s task was to interface the punched card reader and punch to ENIAC and to write the impressive technical manuals that described ENIAC’s operation.

Once ENIAC was officially announced to the world as a working system on Feb 15, 1946, Huskey left the project and took up a summer teaching position at Ohio State University. While there, he received a telegram from Douglas Hartree, a famous British mathematician and physicist, whom he had met during the ENIAC project:

"] … about July we got the cable from England. Before that, Hartree had been running problems on the ENIAC and I’d talked to him and asked him about opportunities in England. He didn’t say much, so the cable offering the job was a surprise. But we accepted it. We didn’t know what NPL was, but we accepted it. 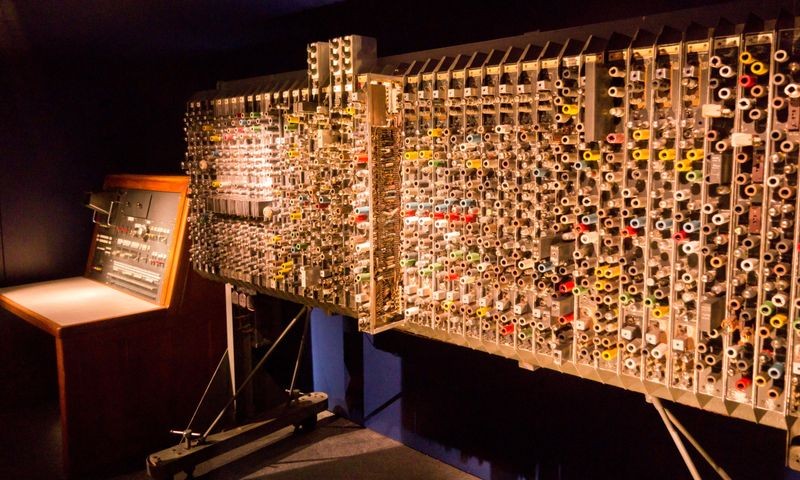 The original Pilot ACE, on display at the Science Museum, London.

When he arrived at NPL—the National Physical Laboratory—Huskey, after adjusting to “smoked fish for breakfast,” began working on a prototype computer whose direction was ultimately under Alan Turing. This was the Pilot ACE (Automatic Computing Engine), one of the earliest electronic computers built in the U.K. The Pilot ACE was a smaller version of the full ACE, designed by Turing and built some years later. Both machines were intended to embody Turing’s grand idea that computers could be universal, that is, that they could perform any logical operation through software rather than purpose-built hardware. The big idea behind all this was the notion of a stored-program. A stored-program machine keeps its operating instructions and data in memory, where they can change dynamically. Rather than building a separate machine for each purpose, Turing’s machine, using the idea of a stored-program, could become any machine. Being able to store its own program is one of the defining characteristics of what we think of as a computer today.

Huskey spent several months working, as did most of the 3-man team, on algorithms and instruction sets.

"] Of course, Turing was interested in what we came to call the “Big ACE”, which was a much more complicated machine than the…[Pilot ACE]. What we wanted was one that would prove all the different techniques to outsiders, for example. What we all wanted to do personally was build a computing machine that would work. As far as the machine is concerned, you took a look at Turing’s design and say, “What can we cut out and still have something that does a reasonable computational job?” So we did that.

This machine became the Pilot ACE and ran its first program on May 10, 1950, by which time Huskey had left NPL to return to the United States. It quickly became popular with mathematicians and was kept very busy until its retirement in May 1955. A commercial version, called the Deuce, was built and sold by English Electric, probably the first commercially produced computer in Britain.

"] Turing was an interesting character. He had no patience for stupidity. None whatsoever. And he wouldn’t talk to newspaper people or news magazines and so on. But if somebody had a little problem and they were having a terrible time, he would help them and go way out of his way to help them. So he was that kind of a mixture. I think there’s no hint, as far as I was concerned, about his homosexuality. None whatsoever. He was an Olympic class runner, of course, at that time. In fact, I raced him to Dollis Hill [a distance of 16 miles].Wilkinson had raced him with a bicycle, you see. But when it came to me, I clearly was not the bicycle type. So the challenge was: I would take the train, and we’d leave at the same time and see who got there first. Because going by train wasn’t too simple. You would take– the train from Teddington did a loop back into Waterloo Station. So you go part of the way into town and at Clapham junction, I think it is, there you pick up a train that goes circular around London to the north edge. There you pick another train that goes out to Dollis Hill. Well, I think I beat Turing by five minutes or something of that sort. …In a little briefcase, I carried his clothing and he changed at the gate at Dollis Hill and we went to visit the people there. 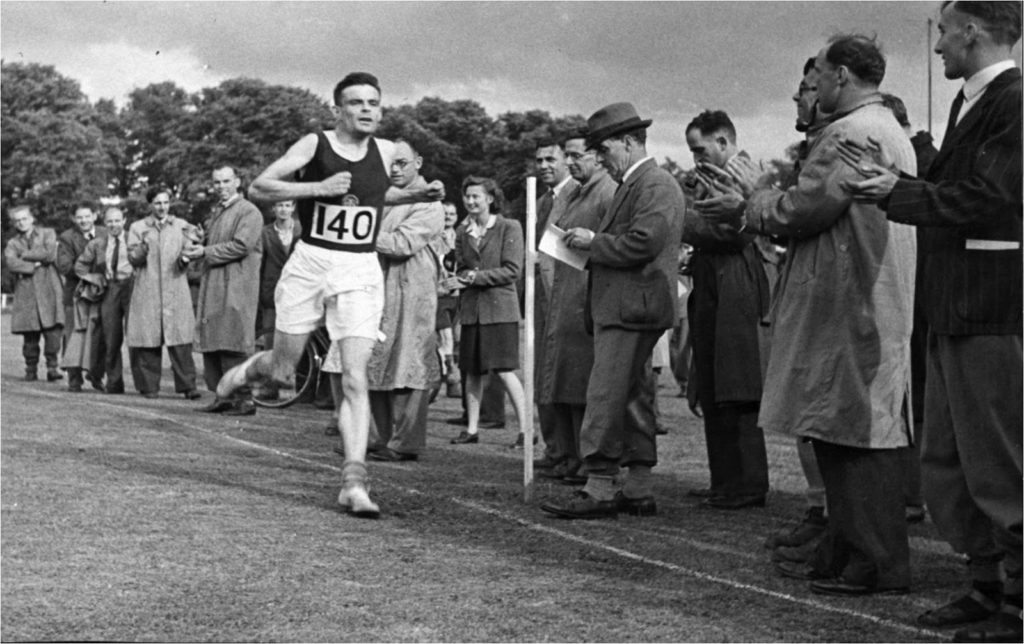 In December of 1948, the peripatetic Huskey had left NPL to design and lead fabrication of the Standards Western Automatic Computer (SWAC), a US government-sponsored computer that would support mathematicians at UCLA and the air force at a new center for numerical analysis. The machine was meant to be an interim computer while manufacturers caught up to the independent efforts of universities and government. It ran, with some modifications, until 1967. Huskey, who says later that he learned his electronic design skills from a textbook as he went along on the Pilot ACE project, remarkably led the SWAC design as well. There were some thorny problems to solve. For example, here Huskey describes the primitive state of manufacturing the cathode ray tube memories that SWAC used:

"] Well, the real challenge was the presence of flaws on the face of the tubes. We bought tubes from Dumont. And we come to find out that they were made in a warehouse that had been a mattress factory, and the lint would deposit. There was lint everywhere, and it would deposit in the face of the tube when they put the phosphor there. And then when the tube was heated and evacuated, the heating would turn those pieces of lint to carbon, and you have these little areas that you can’t store on a spot next to because it just spreads out on the piece of burnt lint. 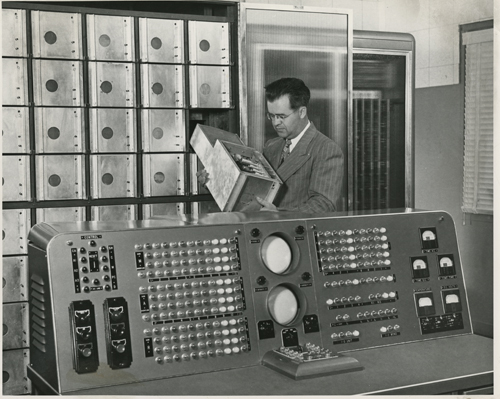 At that time of its completion in July 0f 1950, SWAC was, for a brief period, the fastest computer in the world. It is also one of the earliest computers in the United States and lived on, in modified form, at UCLA until 1967. 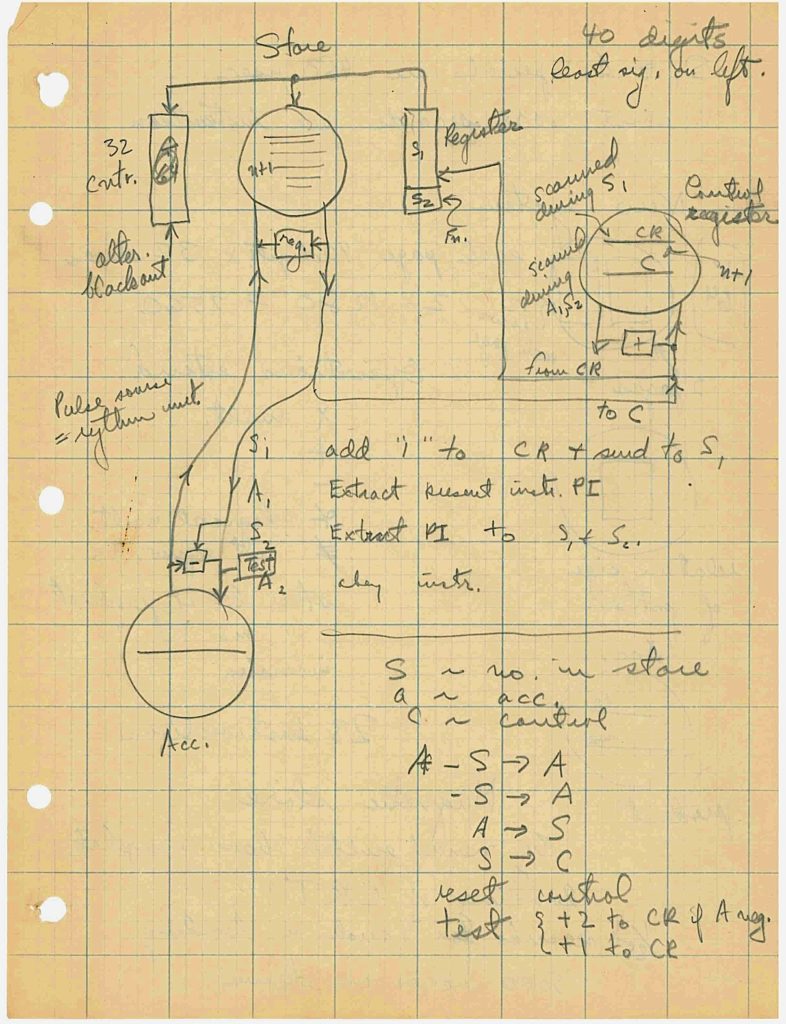 During his SWAC work, Huskey also appeared on You Bet Your Life, a live television show hosted by Groucho Marx, in which the mild-mannered Huskey tries to explain what SWAC does. Groucho, as usual, takes no prisoners and ties everything (and everyone) into knots. You can listen to the episode, which first aired May 10, 1950, here. The Huskey sequence starts at 15:08.

After five years on the SWAC project, Huskey accepted a teaching offer at UC Berkeley, beginning in 1954. While there, he designed, under contract, a remarkable computer that embodied the then-heretical notion that one person could use a computer all to themselves, without the need for operators to intercede.

While at Berkeley, he designed the G15, which was manufactured and sold by Bendix Aviation Corporation. The G15 was the first computer that could perhaps be called a “personal,” computer, in that one person alone could operate it. Introduced in 1956, it was targeted at scientific, industrial and engineering users who could simply sit at the machine themselves and solve problems right away. It’s difficult to appreciate how big a difference this approach had on the ‘thinking style’ of G15 users in which multiple variables can be changed quickly and easily on a computer, allowing for iterative problem-solving of a type that is not possible with existing computers (which were, by and large, enormous room-filling complex systems professionally managed and mediated). 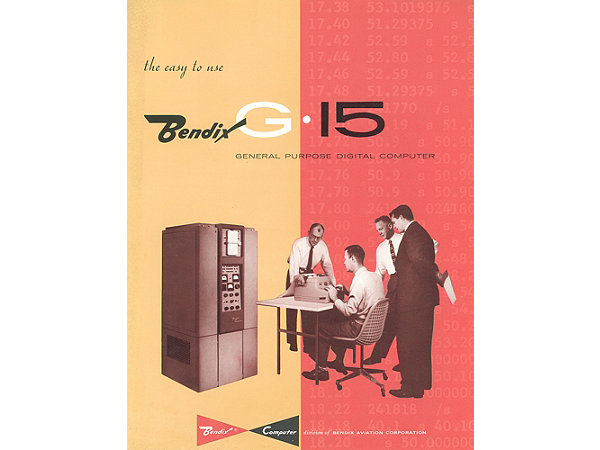 The G15 didn’t fill a room—it was the size of a refrigerator. It costs just under $50,000 or could be rented for about $1,500 a month. These are big amounts for the 1950s but a fraction of the other systems, which could cost millions of dollars. CHM has a G-15 in its permanent collection.

In 1967, Huskey left Berkeley for the newly-opened University of California at Santa Cruz campus, which he joined as faculty and founder and director of its computer center, a position he held for 10 years. He taught and advised other universities on setting up their own computing centers and computer science programs, including a 2-year stay in India at IIT-Kanpur advising on their new computing activities there on a Ford Foundation and USAID program. He also advised the University of Yangon (Rangoon), Burma with UNESCO support. He retired in 1986 and lives in Santa Cruz, California.

Harry Huskey will be joining the CHM Fellow Awards this year to accept his award in person.