Documenting the 8-bit Generation & Beyond: An Interview with Filmmakers Tomaso Walliser and Bruno Grampa

The worldwide impact of the personal computing revolution is no secret. Its breakthroughs are now clutched tightly in the palms of our hands and integrated throughout industries across the globe. Embedded in each of these devices is the spirit of an entire generation.

For over four decades, the Computer History Museum (CHM) has documented and shared the stories of pioneers, creators, teams, and individuals who broke through barriers, who dared to think differently and, together, changed the world. Also exploring the human facet of our technology is Junk Food Films, a filmmaking company with a focus on hi-tech and a mission to deliver “content for human beings.”

We strongly believe that the human side of the stories we tell plays a key role in our work. Our main goal is to talk about technology without forgetting the extremely important contribution of the people involved in it. Technology changed the world, but this has been possible because of a certain number of people who put their creativity, uniqueness, love, and passion in what they were doing and we’d like to continue to deliver these messages to our audience.”

Founded by Tomaso Walliser and Bruno Grampa in 2008, Junk Food Films made its mark on the documentary film industry with its 2012 project the “8bit Generation,” which resulted in two documentaries Growing the 8-bit Generation: The Commodore Wars and Easy to Learn, Hard to Master: The Fate of Atari_. Both were screened at the Computer History Museum as part of our CHM Live programming.

Bruno Grampa and Bil Herd take to the CHM Live stage after a screening of Growing the 8-bit Generation, March 30, 2016.

We caught up with Junk Food Films’ Walliser and Grampa to talk about everything from their first computers and how they got started to what got them interested in the 8-bit generation and what’ they’re working on now.

CHM: What was your first computer?

Tomaso: Being from Italy, in 1983, our choice was basically between a Commodore VIC-20 (or Commodore 64) and a Sinclair ZX Spectrum. My father came home one day with a ZX Spectrum. It was rare at the time for a 12-year-old to get into personal computing. It was like bringing the world of Sci-Fi into your bedroom. The fascinating thing was that the machine really responded to you, it made you feel you really were on to something. The ZX was really easy to program, the user manual provided a lot of information, and the BASIC interface was comfortable and so it was the best way to enter and understand the digital world.

Bruno: My first computer was a Sinclair ZX Spectrum. What a wonderful machine it was! It gave me the opportunity to learn what a computer was, how to program, and how to built electronic circuits. My passion for computers started with it, and 25 years later it was the start of my retrocomputing interests—I wanted to show my children how the ZX Spectrum worked and I quickly discovered that I wasn’t the only aficionado of old computers. 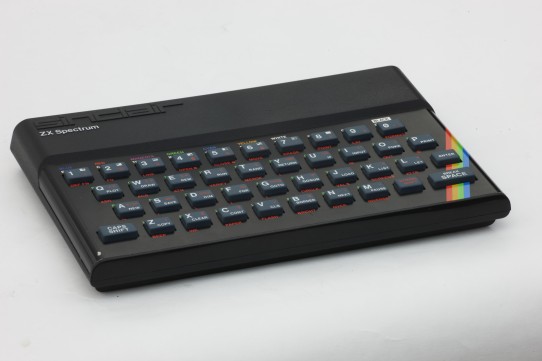 CHM: How did you get into filmmaking, and documentaries specifically?

Tomaso: The love for filmmaking dates even earlier when my father brought me to the cinema to see Star Wars. I was 8 years old. Very soon, I began to think that the most interesting thing in Star Wars (besides the many, many things that an 8-year-old would find interesting) was MAKING Star Wars. It really looked like a giant toy to play with. I came to the idea that closing yourself off in some California ranch to create fantastic worlds was the way to go in life.

Documentaries came later as a professional opportunity. Recently, I’ve seen documentaries as a means to pay homage to the two main inspirations of my professional life: cinema and computers. And here we are.

Bruno: As a journalist, I love to tell stories. We have been spectators of an incredible revolution. When I was a kid there weren’t computers, internet, and all the incredible technological stuff we have today.

But I’ve seen world change, and I understood the importance of the people behind these tech discoveries. This story must be told, and thanks to the partnership with Tomaso, I cannot only write about that but also create documentaries.

Tomaso & Bruno: Junk Food Films started with a project called “8bit Generation.” What we wanted to cover was the period of time, from about the early 1970s to the late 1980s, when 8-bit technology came to the fore and was adopted by a generation of enthusiasts that turned their dreams into a revolution.

CHM: What makes your documentaries unique from others that cover technology?

Tomaso & Bruno: During the production stage of Growing the 8-bit Generation, we met 80 people of whom we shot interviews and various footage. These people, each one in their own way, have been protagonists and witnesses of the digital revolution that was taking place and many of them were directly responsible for bringing computer power to the mass consciousness.

We strongly believe that the human side of the stories we tell plays a key role in our work. Our main goal is to talk about technology without forgetting the extremely important contribution of the people involved in it. Technology changed the world, but this has been possible because of a certain number of people who put their creativity, uniqueness, love, and passion in what they were doing. And we’d like to continue to transfer these messages to our audience.

Enchanted by these amazing stories of success, our purpose is to remain focused on the human side of them, both the good and the dark one. We like stories where professionalism and love, genius and dedication live side by side with ruthlessness and greed, ambition, and betrayal: an explosive mixture that very often is the necessary basis to achieve the kind of greatness that is bound to change our world.

CHM: You’ve interviewed some pretty amazing industry figures, including Commodore founder Jack Tramiel and former Apple CEO John Sculley. How did you get access to these tech giants?

Tomaso & Bruno: Just asking them! We explained the project, in our esoteric way of speaking English, and our way of storytelling and their answer was yes.

CHM: What were some of your most memorable interviews and why?

The interview with Jack Tramiel was really awesome and sadly it was one of his last. It’s truly a piece of history.

Talking with John Sculley was like a dream for us. After the first question, he was a continuous flow of words and emotions. We think that what we have recorded is his most complete talk about that period in Apple.

CHM: Tell us a little bit about the documentaries that came out of the 8bit Generation Project. What did you learn from them?

Tomaso & Bruno: Our first documentary as part of this project was Growing the 8-bit Generation: The Commodore Wars. In September 2014, we attended XOXO Festival in Portland, Oregon, and previewed some footage to audiences with great acclaim. We knew that Tramiel and Commodore played an essential role in the early digital revolution, but what we learned at XOXO was that Commodore and computing fans had never heard this story, with its history and impact from first-person narratives, the way we were telling it. We knew we were on to something special. 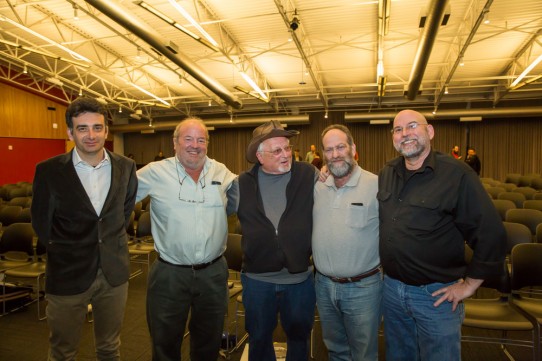 The Commodore Wars is the true story of the Apple II, Commodore VIC20, TI 99/4A, Sinclair ZX series, and the Commodore 64, the latter being the biggest selling single computer of the 20th century. All of these machines served as an introduction to computers for a couple of generations of kids. But it is also the story of a number of wars that Jack Tramiel led against his competitors with his unquestionably bad temper and shrewd strategies.

There are different things to learn from this story: some are about business, some are about technology, some are about ourselves and where we are now, but perhaps the most important are the ones about ambition and humanity and how we choose to spend our time on earth.

CHM: And how about the second film—Easy to Learn, Hard to Master: The Fate of Atari? Can you tell us a bit about that film?

Tomaso & Bruno: The Fate of Atari was the second film we did as part of the 8bit Generation Project. Before Google, Yahoo, and even Apple, there was one company paving the way for today’s hi-tech creative culture and hard-hitting business style: the one company coming out of the Age of Aquarius was Atari. This 100-minute long documentary is narrated by Bil Herd, former Commodore senior engineer and our spokesman from the 8-bit era, and features a list of unreleased interviews of key people, including a very rare conversation with Warner VP Manny Gerard and a unique interview with Atari CEO Ray Kassar, the man held responsible for Atari’s success and the video game industry crash at the same time. Kassar had never appeared in a documentary before this.

The story of Atari is two-thirds the story of Nolan Bushnell, founder and visionary, and one-third the story of the first, and maybe even the biggest, tech economic boom and bust. Atari showed the world that technology was cool before the personal computer revolution took off and were reaching an ever-growing audience with a product that is still cool today: video games. We believe Atari introduced mass audiences to the digital age, ahead of Apple, Commodore, Microsoft, and even the Homebrew Computer Club.

Nolan Bushnell and Atari have a huge collection of firsts: the first successful video game company, the first coin-op video game, the first general-purpose console to win the market, the first marriage between video games and the movie industry, the fastest growing company in history, the biggest industry crash ever, and some of the most bizarre anecdotes in Silicon Valley. It’s a fun story but also one that is educational and revealing about early Silicon Valley company culture and business. This is another unique look at Silicon Valley, much different from the stories we are used to hearing—less heavenly, much more earthly, much truer, and a lot more engaging. 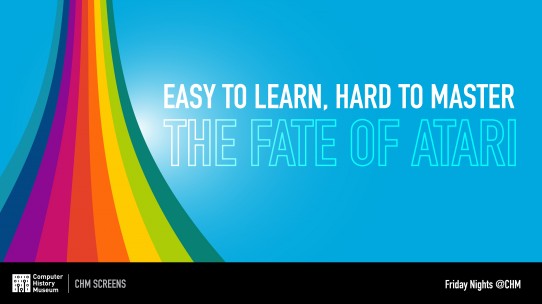 Easy to Learn, Hard to Master: The Fate of Atari is the second film to come out of the 8bit Generation Project. It was screened at the Computer History Museum on June 23, 2017.

CHM: What are you working on now?

Tomaso & Bruno: We’re working on a film about Steve Jobs: Steve Jobs’ Choices. It’s about the human side of some of the hardest and toughest decisions of his professional career. The core of this documentary is an incredible, breathtaking series of interviews we shot with John Sculley, Mike Markkula, Steve Wozniak, Andy Hertzfeld (and many more!). They talk about Jobs in a way that we’ve never heard before. There are many films and documentaries about Jobs, but we believe no one can tell this story in such a deep, emotional, and even addictive way.

We began searching for people who worked with Steve Jobs and asked them to talk about their emotions, feelings, stories during key moments of Jobs’ life and career. These are the main protagonists of the hardest decisions!

We are financing it right now with a crowdfunding campaign on Indiegogo. Learn more here.

Steve Jobs’ unbelievable instinct, told by the people that were closer to him more than anybody else. The film includes interviews with John Sculley, Mike Markkula, Andy Hertzfeld, Alvy Ray Smith, Larry Tesler, and others. Learn more.