From Weaving to Programming: A Brief History 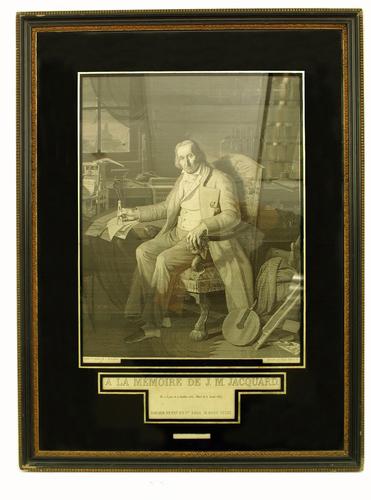 Portrait of Joseph-Marie Jacquard, ca. 1840. Collection of the Computer History Museum, X341.84. CHM's J. M. Jacquard portrait was “adopted” by first-time donor Junfeng Pan. Thanks to his generosity, our portrait will undergo much needed conservation in 2019.

It may not seem obvious, but one of the most significant figures along the path to the development of automatic computation was a French weaver and merchant born during the reign of Louis XV. Joseph Marie Charles developed one of the most significant advances in the history of textiles, which also inspired key inventions in automatic control and data management. Joseph Marie is better known by the name of a particular branch of the Charles family—Jacquard.

Born in Lyon in 1752, Jacquard was something of a jack-of-all-trades early on, before becoming a silk weaver and merchant after inheriting looms after his father’s death in 1772. At the time, mechanized looms called “power looms” were in use but were limited in the kinds of fabrics they could produce. Jacquard, a tinkerer, began experimenting with creating improvements on power looms. In 1800, he created a foot-powered treadle loom, which he exhibited at the Exposition des produits de l’industrie française in Paris, where it received a bronze medal. In 1803, he created a loom specifically meant for weaving fishing nets. That same year, his work caught the attention of the Conservatoire national des arts et métiers, which extended membership to him. At the Conservatoire, Jacquard discovered a loom created by Jacques Vaucanson in 1745. Vaucanson had invented an attachment that allowed a power loom to be controlled by punched cards. While the loom was card-controlled, it was limited to the patterns it could create. Jacquard began working on an improved loom, card-controlled, but better able to perform complex weaving.

Vaucanson was not the first person to attempt to automate the weaving process, with Basile Bouchon and Jean Baptiste Falcon having created less advanced automated loom systems in the early 18th century. Bouchon’s was based on paper tape, while Falcon’s used a punched card system.

Prior to card-controlled power looms, creating complex patterns was very difficult. The basic operation of a loom to create a solid -color fabric could easily be performed by a single operator. For more complicated designs, the operator would require an assistant who would lift crosswise threads known as the weft, allowing a shuttle to pass through, thereby varying the design. In Vaucanson’s loom attachment, a series of cards could raise and lower the weft using a series of hooks, controlled by a sequence of connected cards. The cards could be strung together in a chain, allowing for longer periods between repetitions. This scheme also meant that a loom could be operated without an assistant, halving the required workforce! This did not please weavers, who threw rocks and stones at Vaucanson and the looms using his device.

Jacquard took much of Vaucanson’s concept, while incorporating aspects of both Bouchon and Falcon’s designs, and in 1804, developed his card-control for power looms. Jacquard’s loom system could produce much finer fabrics and more complicated patterns. While Vaucanson’s could only change the weft position every other pass, Jacquard’s was designed to change at each pass of the shuttle. Jacquard’s early system was slightly buggy—the punched card mechanism was not perfected—but it caught the eye of manufacturers, and orders for the system flooded in. The French government recognized the importance of the design and in 1805 nationalized the Jacquard control unit, giving Jacquard a pension, and a royalty on each unit sold. The mechanism sold very well, even if the device was difficult to use and required frequent maintenance.

The control mechanism helped change the direction of fashion. Intricate patterned fabrics such as damasks and brocades had always been prohibitively expensive, but automated weaving by the Jacquard process made them more affordable. The fabrics of the Regency period in England and of mid-19th century France, available only to the well-off in the prior century, were now affordable to middle class audiences.

As is often the case, innovations in one field can influence others. Charles Babbage, the famed mathematician and inventor, was aware of Jacquard’s loom concept and in the 1830s, as he designed his “Analytical Engine,” conceived of a control mechanism that used loops of punched cards. Ada Lovelace wrote of Babbage’s control system:

Inventors began to experiment with player pianos in France in the 1840s and there were soon several pianos controlled by rolls of paper with holes punched in them. This became the dominant form of control for player pianos well in the 20th century.

These were all ways of storing control programs. It wasn’t until 1890 that punched cards were applied to data collection. German-American engineer Herman Hollerith had studied both Jacquard loom systems and player pianos in his work to speed up the process of tabulating the 1890 census. His system used paper cards punched with data collected in the field. A reader and sorter system registered the data on a dial which was read at the end of the day for final results. Punched cards were the dominant form of data and program storage through the 1970s. While that may seem like a long time for a technology to survive, consider that the Jacquard Loom concept was the primary form of automatic power loom control through the 1980s, a span of more than 170 years. 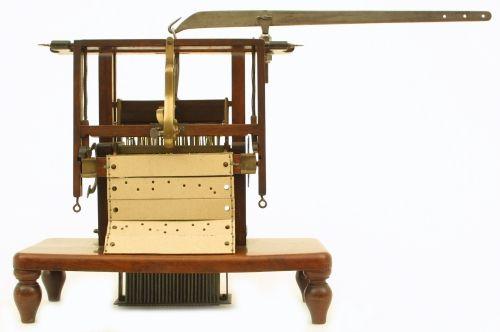 The Computer History Museum (CHM) has several Jacquard-related objects, including an 1825 table- top demonstration model. One of the most impressive Jacquard objects we have is an 1830 woven portrait of Jean-Marie Jacquard. Based on a painting by Claude Bonnefond (1796–1860), manufacturer Didier Petit et Cie commissioned the silk “copies” from specialist weaver Michel-Marie Carquillat, ca. 1839. The original painted portrait realistically depicts translucence in the curtains and glass windows and implies metallic shine on the instruments. These details can also be seen in the weaving and are only possible because of Jacquard’s invention of his loom and card technique, making this portrait a unique testament to the inventor and his invention.

This painted image of Jacquard is considered one of the most important images of him; the original painting is in the collection of the Musée des Beaux-Arts in Lyon, France. Several museums have the silk version of the portrait, including the Art Institute of Chicago, the Metropolitan Museum of Art in New York, and the Science Museum in London.

Recently, our copy of the portrait was damaged. Conservation of such delicate artifacts is a difficult matter, requiring costly intervention and repair. Sometimes, damage to an artifact is a blessing in disguise as it gives immediate reason to have a conservator assess an artifact’s condition. That is certainly the case with the J. M. Jacquard portrait. Packed in a box for long-term storage, the framed portrait was accidentally knocked to the floor during moving. Although the glass shattered, no damage to the portrait itself occurred. CHM registrars immediately investigated materials and construction and sought advice from textile and glass conservators. Comparing it with records of another copy featured in the collection at the Metropolitan Museum of Art, it was discovered that the weaving and its identifying panel, originally believed to be one piece of silk, were actually two pieces adhered to poor quality backing board. Like the board, the wood frame and even the reverse-painted glass were determined to be highly acidic materials that threaten the portrait’s longevity if not replaced. But before remounting and framing, the tapestry must be cleaned and treated by a professional textile conservator. Thanks to a generous sponsorship gift, the work is scheduled to be performed in the coming months.

Our Adopt an Artifact program has enabled us to repair objects such as a miniature model of the NCR 304 computer. Currently, a Fox comprised of electronic components created for a legendary series of advertisements for Honeywell is available for adoption. The program enables us to repair those objects, and with a new donor, we are able to give the Jacquard portrait a new life!

First-time donor and sponsor Junfeng Pan is from China—“the homeland of silk weaving,” as he points out. As a research scientist and engineering manager for Facebook and senior member of the IEEE, Junfeng has a special interest in artificial intelligence and machine learning. At a young age, when he first learned the programming language Logo, he became fascinated by its power on turning mathematical ideas into beautiful works of art. He noted, “I’d like to promote technology via art performance. It may help engage boys and more girls in STEM and bridge gender gaps.” An artist in his own right, Junfeng explored weaving pixels using deep neural networks which he described as ”an artificial brain of simulated networked neurons” for a recent, local exhibition.

A passion for tech in art was Junfeng’s motivation for tracing early programmable machines to the Jacquard loom:

I was excited to learn that one portrait of J. M. Jacquard, woven in silk on a programmable loom with 24,000 punched cards was collected by [the] Computer History Museum. This early form of programmed art is a true engineering beauty. It is a masterpiece of art and technology. Not only did the Jacquard loom revolutionize the weaving industry, but it also created the foundation for future computing. I really feel honored to help preserve this masterpiece via the Adopt an Artifact program.

The Museum is proud to have such a significant object in its permanent collection. The conservation work Junfeng is supporting will keep this unique artwork preserved in stable condition for decades to come. 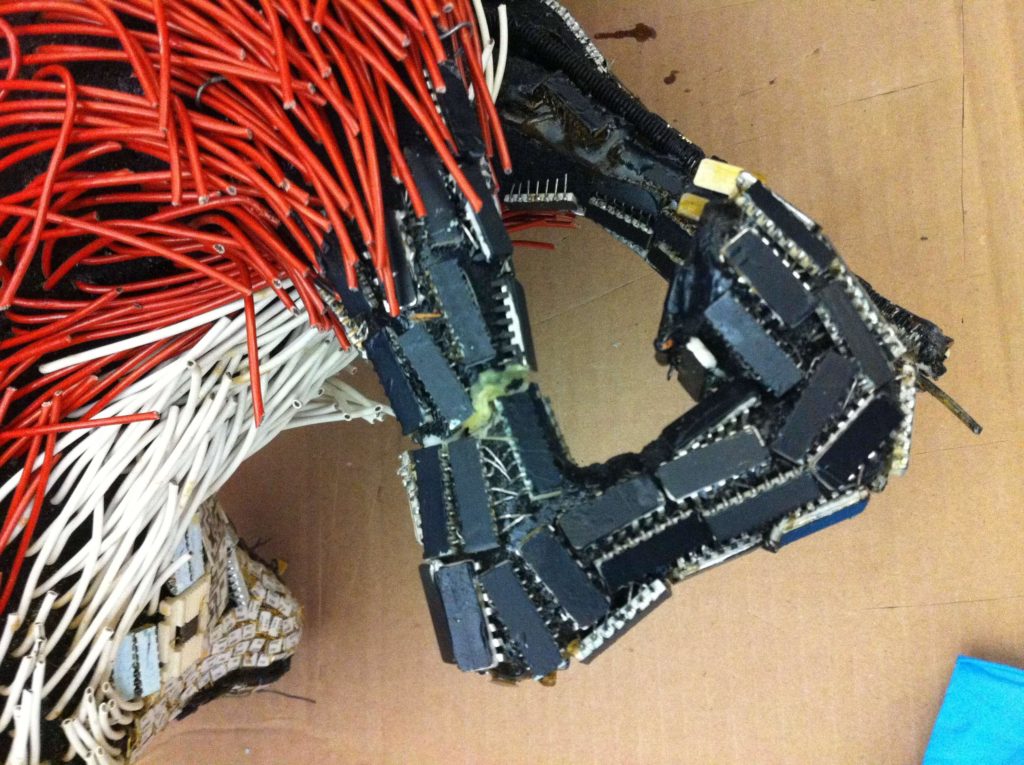 Computing, from Silicon Valley and beyond, has guided how we conduct business and socialize, influenced our global economy, and even shaped literature, film, games and various forms of entertainment. The Museum has built a world-class collection of rare and unique computers, software, texts, images and oral histories to preserve and interpret our rich, shared history.

You can personally connect with a historic artifact and support the Computer History Museum´s collections, exhibitions and interpretive programs by sponsoring conservation costs through the Adopt an Artifact program. Artifact adoptions are a creative, unique way to honor an individual through a gift adoption, perfect at any time of year.

Look for a companion blog in 2019, documenting the conservation process of CHM’s J. M. Jacquard portrait.