Women and the Public Face of Computing 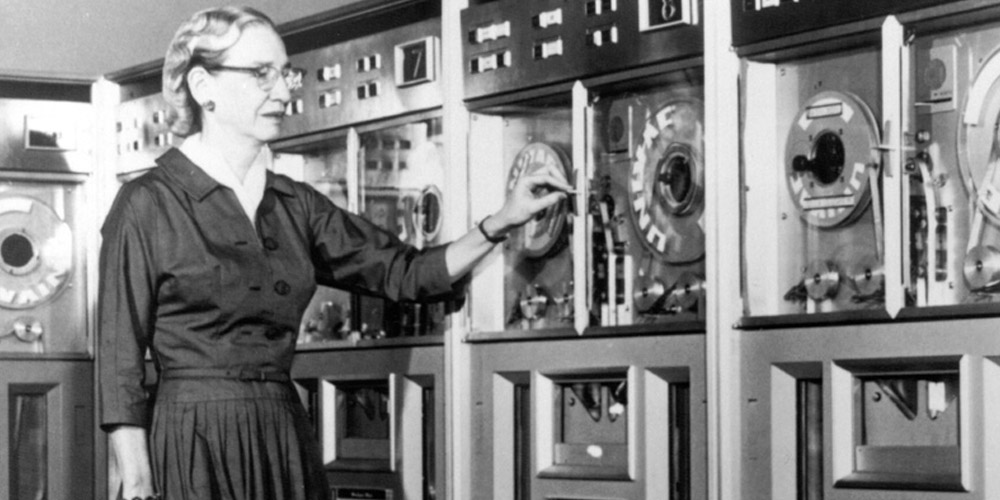 One of the world’s earliest programmers, Grace Hopper, adjusting the door on a later-model Univac computer system magnetic tape drive. Hopper developed early methods of improving programmer productivity while at Remington-Rand, including one of the earliest compilers, A-0. She was a popular speaker, rear admiral in the U.S. Navy Reserve, and a CHM Fellow.

The modern computer began as a laboratory curiosity. Early computers and proto-computers of the 1940s were one of a kind, usually hand crafted machines built at enormous expense.

Beginning in about 1951, however, and led by two companies, computers became a commercial product: Remington-Rand in the U.S. with their “UNIVAC” computer and Lyons Tea Company in the U.K. with their LEO I computer, both introduced computers aimed at business. Business applications were a new market for computers, which until then were generally thought of as powerful calculators, not business machines. 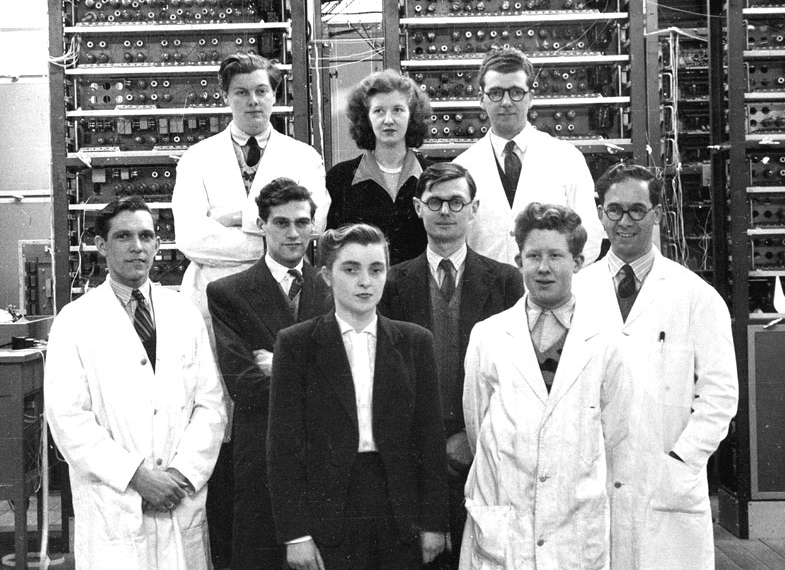 The LEO I, by contrast, had only one customer, Lyons Tea Shops in the U.K., a far-flung national empire of 200 tea shops. The LEO was used to schedule deliveries and process the company’s accounting. Lyons management deployed an early example of what was later called “operations research” using LEO to orchestrate the fresh delivery of tens of thousands of baked goods across the country on time and without waste. LEO even handled the routing of trucks for optimum efficiency.

While the LEO I was a one-of-kind computer, the LEO II and III, were broad commercial successes and were counted such clients in the U.K. as Ford, Heinz, the Royal Bank of Scotland and dozens of others. In these early days, the U.K. was a world leader in computing and even Her Royal Highness Queen Elizabeth viewed a demonstration of the LEO I in 1951. Perhaps “Leo” would make a nice name for the new Prince of Cambridge? 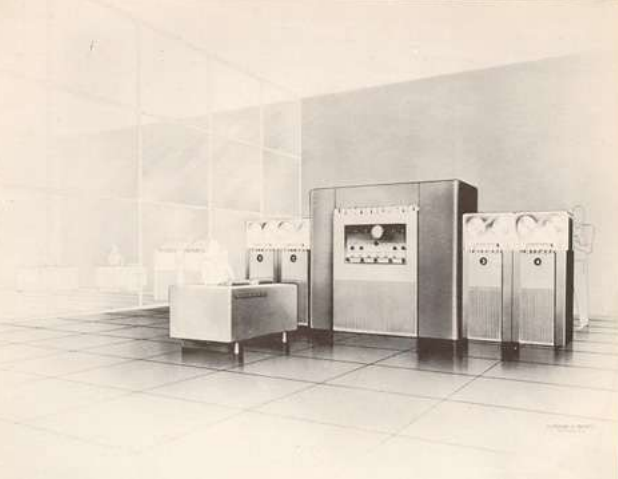 Once computers are marketed, can brochures be far behind?

On the surface, brochures may appear trivial. But brochures are actually very useful cultural artifacts that can be decoded or “read” for clues about how a company perceives itself, its customers, and the market. For this reason, they are like flies in amber—an historical moment frozen in time. Women have been part of the story of computing since the beginning and while their technical contributions are often overlooked, they do appear in marketing materials in various ways. On the one hand, women are represented as users of the computer system itself, placed on a par with the men, and shown interacting with various system components. On the other hand, they can be used as plain window dressing, superfluous to the purpose or function of the computer and intended solely to appeal to the (male) customer.

Let’s have a brief look back. 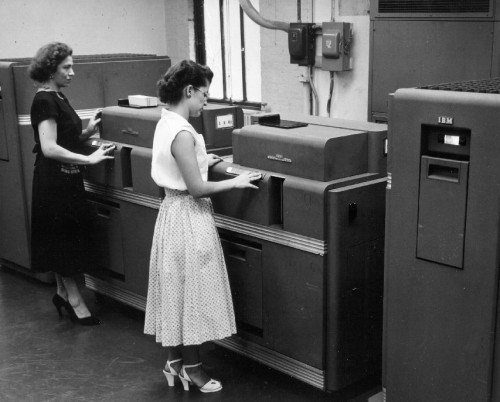 Shown here are two women, interacting but probably as clerks, with an early IBM punched card computer system. Nathan Ensmenger in his landmark study of gender roles in computing notes that in this early era in which the requirements were largely clerical, women were seen as a low cost source of labor. Once computing became ‘professionalized’ (mostly by men), women were excluded from the expanded possibilities computing offered and relegated to continuing in a clerical capacity. There were few exceptions until the mid-1960s. 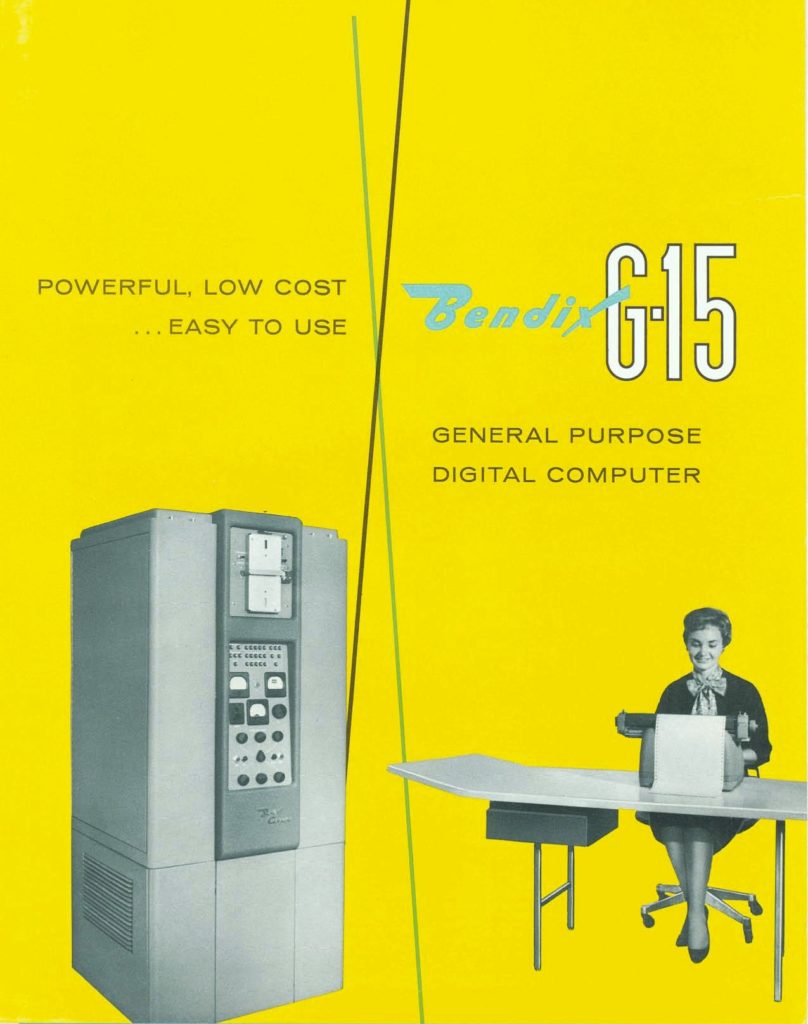 The 1956 Bendix G-15 was one of the earliest ‘personal computers,’ i.e. a computer that was intended for one user only. It was designed by CHM Fellow Harry Huskey. Here we see a woman depicted as a user, typing on a keyboard directly attached (presumably) to the computer. The message is simplicity and ease of use, a new concept in computing, as was computing at this smaller, more personal, scale. 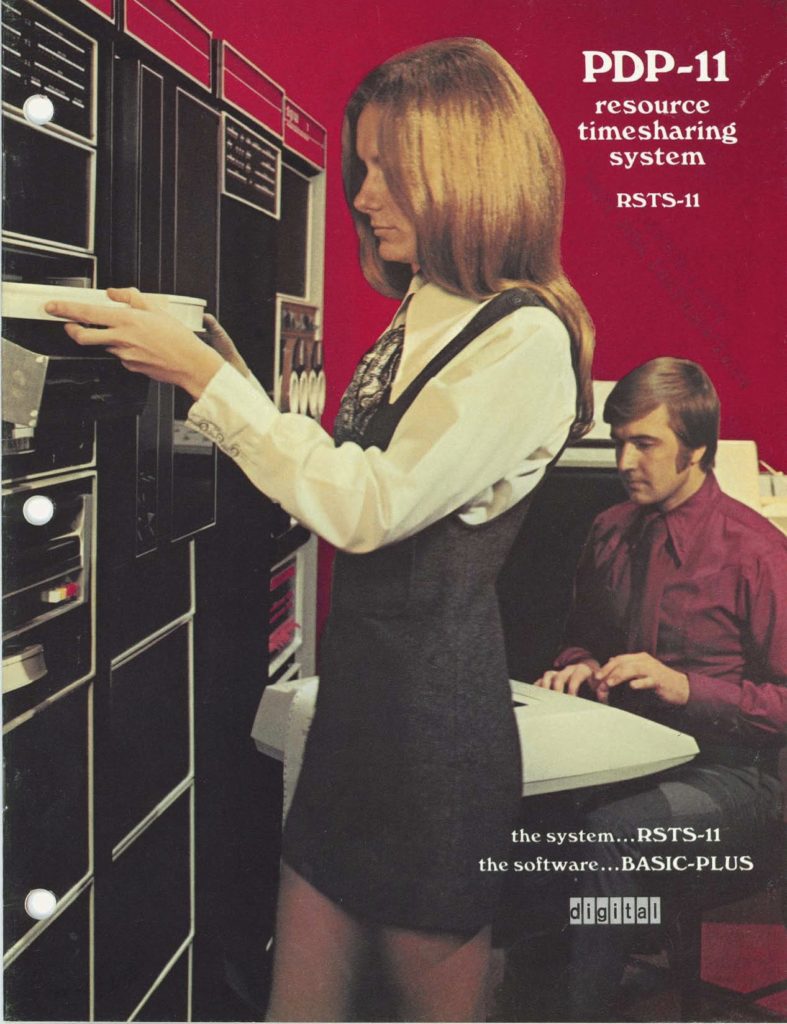 The 1971 DEC Resource Timesharing System (RSTS) was a software system designed to allow multiple users to interact with a DEC PDP-11 minicomputer. The woman is inserting a disk pack into the computer while the man is sitting at a DEC terminal/typewriter (and known as a DECWriter). This type of system was very popular in small business and university environments, where its short learning curve was an advantage. 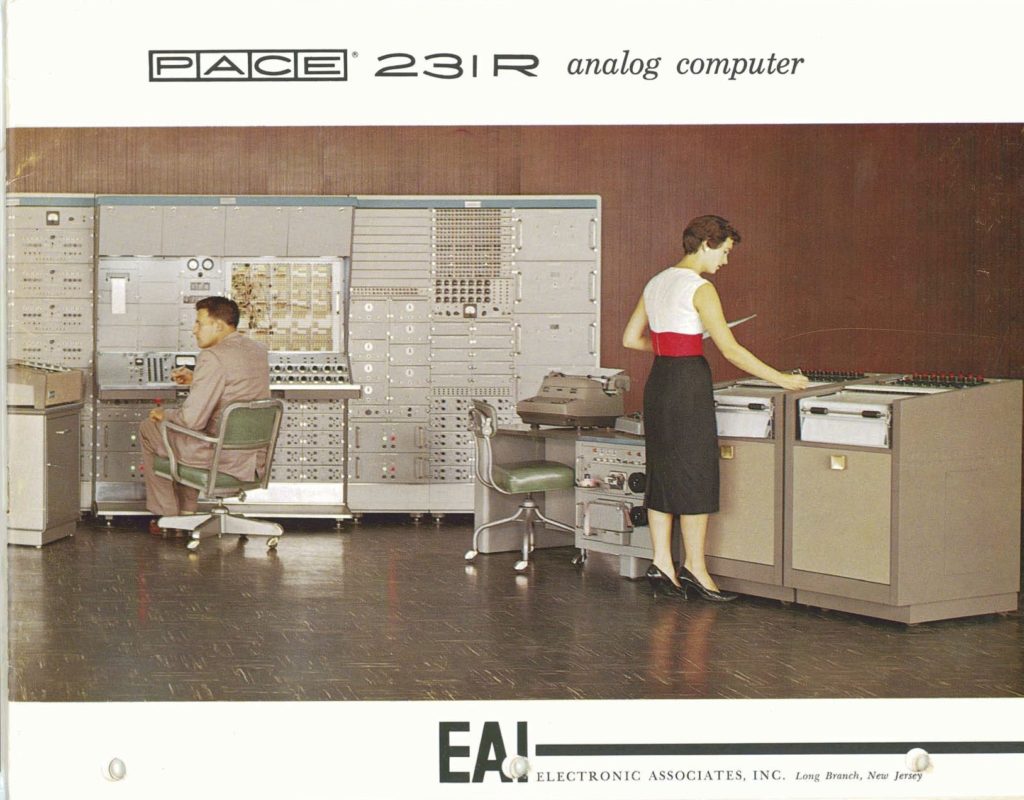 EAI was one of the world’s leading manufactures of analog and hybrid computing systems. Originally developed in the early 1930s, analog systems held their own against digital computers until the mid-1960s when they were displaced by electronic digital computers. Relying on the creation of electrical analogs of the mathematical functions describing a problem, analog systems were particular well suited to problems involving continuous change, a situation very common in all branches of engineering. The PACE 231R (1961) was a large system that could “handle everything from the complicated details of routine engineering problems to the most complex and sophisticated missile designs.” The well-dressed users are interacting directly with the computer, the man at a control panel, the woman with a plotter. 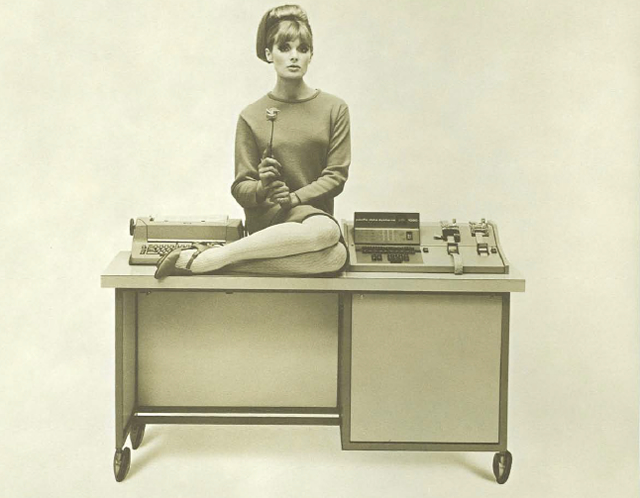 The 1964 Pacific Data Systems PDS-1020 was another “personal computer” in the mold of the Bendix G-15. It was marketed to engineers who “have to rely on manual trial and error, intuition, experience or rule of thumb because more thorough mathematical analysis is too complicated, costly and time consuming…” The slight bouffant hairstyle and pose with a flower are reminiscent of the era… although I’m not sure why she’s sitting on the computer itself. 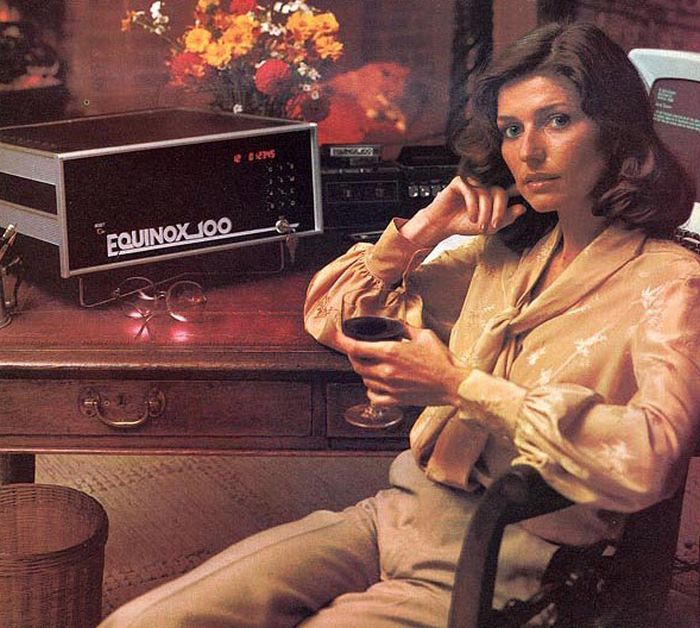 This 1978 microcomputer was built by Parasitic Engineering of Albany, California. In the background, you can see a cassette tape player—which is used for loading and saving data—and, to the right, a terminal used to interact with the computer. This was one of dozens of similar computer systems marketed in the late 1970s, most based on the “S-100” bus and the Intel 8080A microprocessor. Cassette tape was notoriously unreliable as a storage medium… perhaps the wine is her solution?