In His Own Words: John Blankenbaker

One of the great privileges of being a curator at the Computer History Museum is access to nearly two linear miles of documentation relating to the history of computing. Not only the extensive holdings of technical manuals, marketing literature, and ephemera but also the “acquisition files” for the tens of thousands of physical objects in the Museum’s permanent collection. The acquisition files are folders containing information about the donation itself as well as provenance (the object’s “life history”) and a wide variety of interesting historical “tidbits” about the object in question. In the course of looking for information, I’ll often find pieces that I did not expect. Sales and shipping receipts from the 1950s, a business card from a company that existed for less than a month, and a photo of a child’s birthday party where she’s unwrapping a brand-new CP/M computer, are some of the unexpected things I’ve discovered in my course of my recent searches.

One afternoon, while trying to dig up a donor name deep within the acquisition files, I came across a section of fanfold paper. In itself, this is not all that rare. For example, our predecessor The Computer Museum (in Boston) often printed artifact information on fanfold paper using dot matrix printers, but for some reason, I knew this one was different. For starters, it featured a number of pencil notations and corrections to the text. For another, it was in a folder for a lesser-known computer called the Kenbak-1. The last thing I noticed was a name at the top of the page – John Blankenbaker. John Blankenbaker with the Kenbak-1 at the Computer Museum in Boston during the PC Pioneers Day in 1986.

John V. Blankenbaker, the inventor of the Kenbak, has a long career in computing, dating back to the 1950s. His association with the Museum dates back to the early 1980s when the Kenbak was named “The First PC” in the Computer Museum’s Earliest PC contest in 1986. While not as widely known as many other designers of early personal computers, he has always been one of my favorite pioneers. I was ecstatic to read a piece from an active participant written near the time of their most noted work!

It turns out I was both right and wrong. The text was actually an interview conducted during the Personal Computer Pioneer Day in 1986, of which the Earliest PC contest was a part. Sadly, no video of the interview, or any other part of the contest, exists. While it was covered in detail in the The Computer Museum Reports, this appears to be the only direct words we have from any of the participants in the contest in the collection, though there is an extensive interview with Steve Wozniak in the Museum Report. The Blankenbaker interview was the basis for an article in that same issue, though it is much shorter and not in the words of the man himself.

Here follows the speech in its entirety (PDF download below). Special thanks to John Blankenbaker for his permission to post this speech. 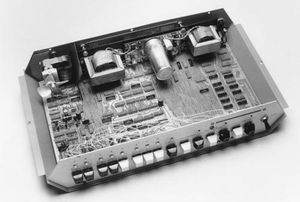 Open view of the Kenbak-1 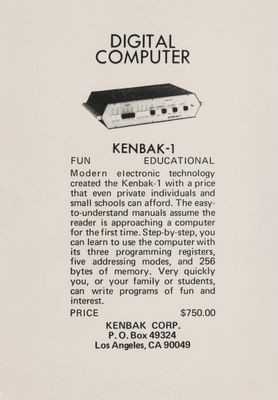 In the years since the Kenbak, Blankenbaker worked for International Communication Sciences, and Symbolics, where he delivered the LISP Machine II (LM2) workstation. He later worked for Quotron, a Southern California company that developed stock market monitoring devices. His exposure to the market led him to start a regular stock market newsletter called A Non-Random Walk, which he edited for more than 7 years. He took a position with Science Products designing instruments for the blind, including cash registers, and a blood glucose meter. Blankenbaker is now retired and lives in Pennsylvania, and is a passionate researcher into genealogy and history.