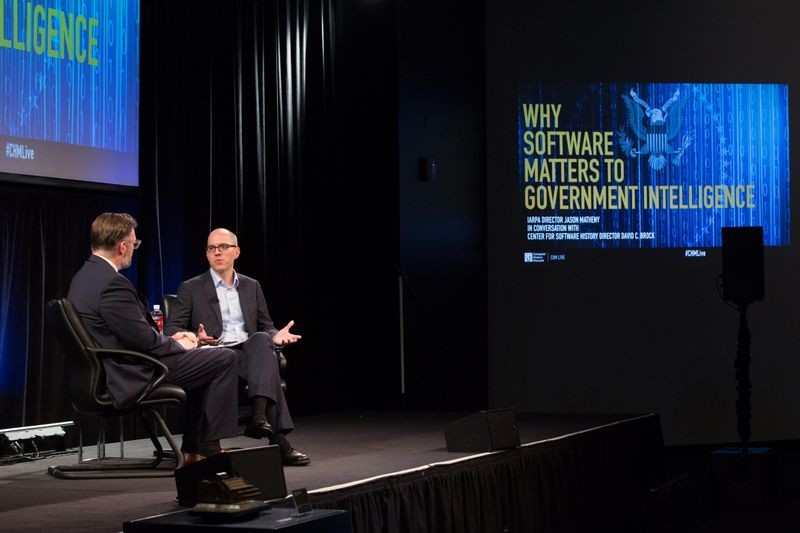 Intelligence Advanced Research Projects Activity (IARPA) was created in 2006 to advance the development of research and technology used to achieve the intelligence goals of the United States (US) and “avoid technological surprise.” IARPA takes advantage of the existing intelligence within academia and the industry by funding high-risk projects that the agency predicts could have a high-payoff when it comes to protecting and defending US national security.

On July 11, the Computer History Museum (CHM) hosted IARPA Director Dr. Jason Matheny. It was an intriguing conversation about the variety of technological advancements, from machine learning to bioinformatics, being created by IARPA and partnering academic institutions, research organizations, and industry professionals to protect the national security of the US. Since being named director of IARPA in 2015, Matheny’s priority has been to protect IARPA’s program managers from bureaucracy, solicit research proposals, and continue its tradition of funding innovative ideas aimed at solving some of the country’s most complex problems. Matheny joined David C. Brock, director of the Museum’s Software History Center, on the CHM Live stage for “Why Software Matters to Government Intelligence.”

Why IARPA Cares about Quantum Computing

Switching gears from software to hardware, IARPA is investing in machinery to produce new forms of computing. Matheny explains how traditional computers are limited in their capabilities to process and analyze the sheer volume of data that society is creating. That’s why IARPA is also investing in programs around supercomputing to develop their complex circuits, as well as quantum computing to create their qubit chips.

IARPA Director Dr. Jason Matheny explains what quantum computing is, why IARPA is investing in quantum programs, and shows photos of what a qubit looks like...

Fancy gadgets and software aside, Matheny insists that humans are not replaceable because the analysts are needed to present the arguments and defend the research results. That being said, the agency recognizes that unlike computers, humans have biases that could affect their interpretation of data, which is why it invests in cognitive psychological programs that aim to assist analysts with making better decisions.

IARPA Director Dr. Jason Matheny explains the premise of two of the agency’s forecasting tournaments and tells you how you can get involved...

The privacy concerns around releasing or leaking people’s private information is another issue that IARPA is trying to solve. Matheny is constantly seeking and selecting proposals for technologies aimed to keep our information both secure and private. One example of a technology that IARPA is investing in that accomplishes these two goals is homomorphic encryption.

IARPA Director Dr. Jason Matheny provides an example of the technology of homomorphic encryption and explains why it’s valuable to national security...

How Is IARPA Protecting Private Information?

Matheny points out that commercial technologies, like Facebook, that are primarily used for marketing and social purposes, make it harder to distinguish between private and public information. Many believe this type of data collection is intrusive. IARPA is investing in technologies that attempt to safeguard personal information, which includes developing techniques to spoof image classifiers and facial recognition software. Matheny discusses the importance of solving the problem of deanonymized data and believes it can be tackled with a multipronged approach—through technology, regulation, and policy.

IARPA Director Dr. Matheny discusses how the agency is investing in technologies to defend against commercial technologies for those that find them intrusive...

What’s One of the Biggest National Security Threats That the United States Faces?

There are real world applications of IARPA’s research and technologies that are benefiting society. For example, Mark Zuckerberg purchased some of the agency’s biomedical texts and patent analyses for the Chan Zuckerberg Initiative. Matheny also cites IARPA’s breakthrough work in the area of disease forecasting. For example, by analyzing datasets of early indicators associated with disease outbreaks, such as cancelling dinner reservations or crowding at pharmacies, IARPA-funded teams at Harvard University were able to detect the West African Ebola virus outbreak.

IARPA Director Dr. Matheny talks about disease outbreak as one of the biggest national security threats faced not only by the United States, but the world...

How Does IARPA Address the Needs of Other Intelligence Agencies?

Matheny stresses the indispensable role of the program managers, scientists, and engineers that get hired to work on these cutting-edge IARPA projects. Matheny explains that the process of getting a project funded by the agency is to submit an idea. Ideas come through several channels, including proposals from outside of the agency, through crowdsourcing and from employees within other intelligence agencies.

The CHM Live team caught up with IARPA’s Jason Matheny backstage to ask him some rapid-fire questions about himself. Here’s what he had to say.

CHM Live: What was your first computer?

Matheny: “MaxiPOK Rule”: maximize the probability of an OK outcome, where an OK outcome is any outcome that avoids an existential catastrophe.

CHM Live: Which current moonshot/tech project would you most like to happen?

Matheny: Success in IARPA’s biosecurity programs. Bio risks are keeping me up at night.

On display during this conversation was CHM’s Hebern Rotor Machine, one of only 12 known to exist. Learn more in “Before ENIGMA: Breaking the Hebern Machine.”

Chanel Lloren is the Associate Producer of CHM Live, the Museum's series of live programs. Chanel kicked off her producing career in New York City as a Production Associate for VH1. She has worked on shows including several Greatest Lists countdowns, Top 20 Oscar Moments, Cutest Celebrity Babies, and hopped over to MTV as an Associate Producer for a season of “When I Was 17”.