Harold Hohbach, a patent attorney and real-estate developer whose mixed-use projects and whimsical art helped transform the area around Palo Alto’s California Avenue died in December 2017 at age 96. According to an obituary in the Palo Alto Online site, Hohbach was “Known for his dogged persistence, his irascible nature, his uncompromising style, and his deep appreciation for Silicon Valley's legacy of innovation.”1

His best-known art project is probably the classical female nude holding a washing machine fountain over her head in the public space outside Caffe Riace at 200 Sheridan Avenue. Somewhat less public is a large canvas painting depicting early San Francisco Bay Area technology pioneers that is currently on display in the adjacent office of engineering design firm Hohbach-Lewin at 260 Sheridan Avenue. Hohbach’s son Doug is a principal of the firm.

Hal Hohbach spent more than 40 years working as a patent attorney, developer, and investor, including serving on the board of Sutter Hill Ventures. His admiration for the persistence and contributions of inventors culminated in his commissioning of a modern-day version of Christian Schussele’s 1862 composite portrait of American Men of Progress, scientists and inventors who “had altered the course of contemporary civilization.” Currently in the National Portrait Gallery of the Smithsonian Institution, the work features 19 men, including Samuel Colt (fire arms), Elias Howe (sewing machine), and S. F. B. Morse (telegraph).2

Hohbach consulted with technology historian Donald F. Koijane of Menlo Park to identify the most significant pre–Silicon Valley era radio and electronics pioneers. In 1998 he commissioned San Jose portrait artist Robert K. Semans to paint a 9x18-foot, tryptic canvas portrait of 14 figures posed with examples of their equipment near the eastern arch of the Stanford University quadrangle. Lee de Forest holds his Audion vacuum tube. Charles “Doc” Herrold, founder of the radio station that became KCBS, speaks into a microphone. William Hewlett and David Packard demonstrate an HP200 audio oscillator to their mentor Frederick Terman. All had some association with the university and/or worked in the area between 1906 and 1939. 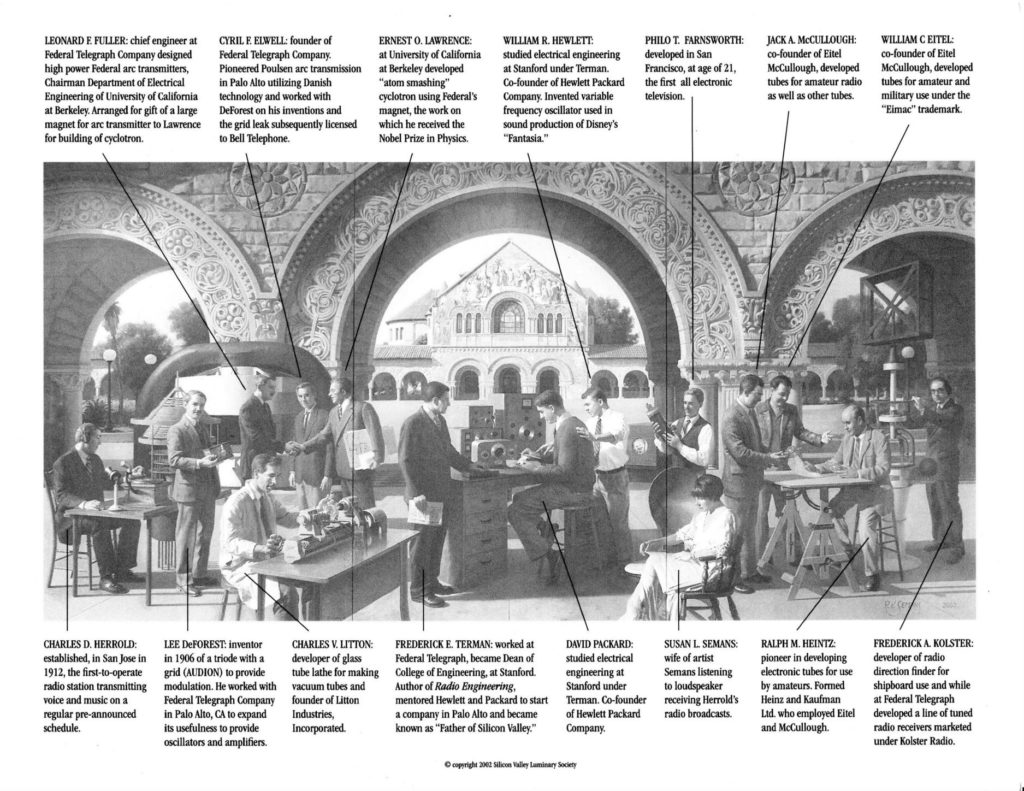 Semans photographed representative groups of people at the site and used Adobe Photoshop to help determine the optimum placement and scale of the figures in the composition.3 He did add one lone woman to the group; his wife Susan, in a white dress, is seated in the foreground listening to music over a loudspeaker. He completed the work in 2002. Hohbach introduced the painting to the public in Palo Alto, under the auspices of his nonprofit Silicon Valley Luminary Society, in 2003.

I first became aware of Hal’s mission to ensure “the legacy of our community’s considerable scientific contribution to the world” through artwork commissioned by his Luminary Society in 2008. As semiconductor curator at the Computer History Museum, he sent me a fax requesting a a photograph of a diffusion furnace used in the manufacture of silicon wafers. On responding, I learned that he had commissioned artist Terry Guyer to produce a set of six 6 x 9-foot composite portraits of more recent Silicon Valley inventors. 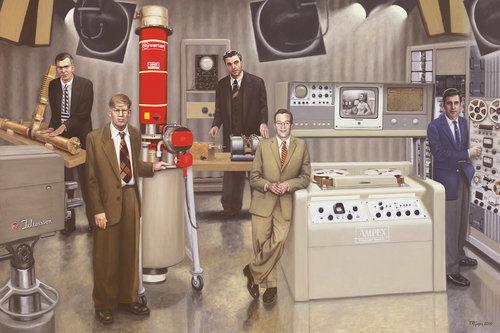 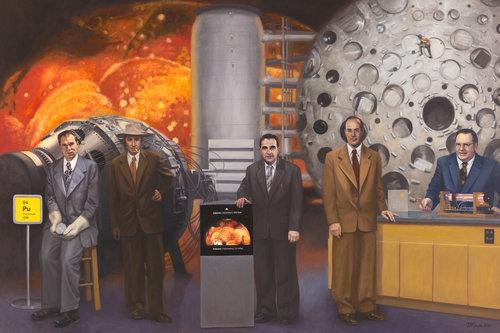 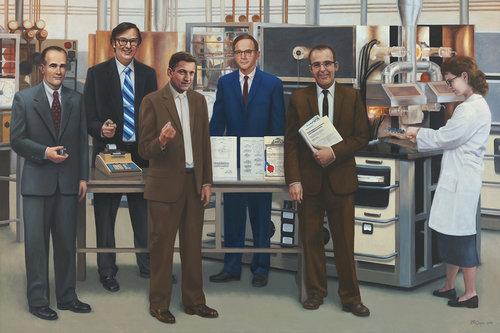 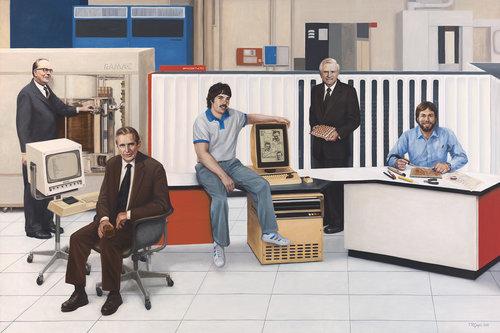 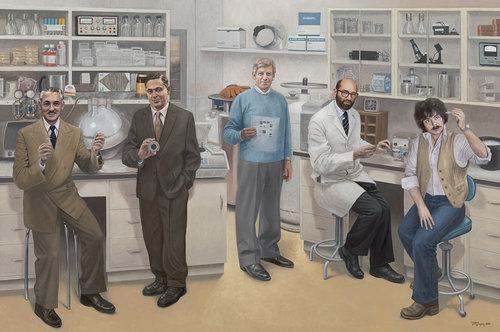 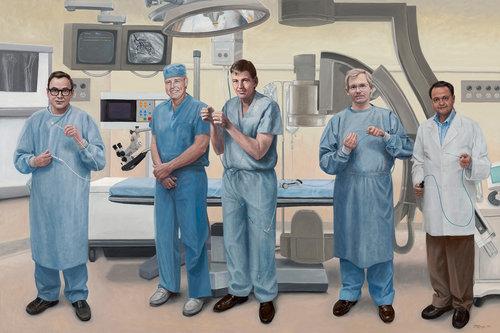 In 2017 Hohbach commissioned two more topics in the inventor series on Computer Networking and Internet Connectivity and Internet Commerce Pioneers. Following the death of his patron in December 2017, Holbach’s family agreed to support Guyer’s completion of the final two portraits. He finished them in May 2018. 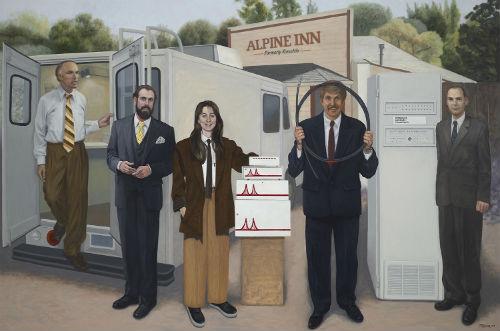 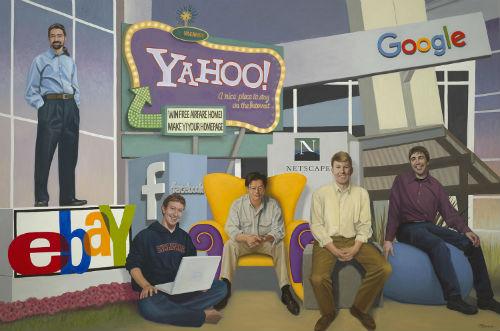 Before he passed, Hohbach made a bequest to Stanford University to expand its presentation of Silicon Valley technology artifacts in the Green Library on campus.4 All nine of the Luminary series of paintings will be added to the Stanford collection. It is anticipated that selected works will be displayed on a rotating basis in the remodeled space. No date for completion of the expansion is currently available.